Wander throughout the western United States, be it from eastern Montana to west Texas or west to Central Nevada and southern California and you are sure to find these tiny cute looking rabbits flocking the gardens or in the desert fields. Botanically, they’re known as Sylvilagus audubonii and they belong to the family Leporidae.

Owing to their presence in mostly the semi-arid, arid, grasslands, shrublands, pinyon-juniper forests and Plain states, the cottontail rabbits are popularly named as desert cottontail rabbit. These rabbits are categorized as the most abundant desert mammals as they’ve got a very high rate of reproduction. They have the potential to breed 4 to 5 times in a year they can give birth up to 5 to 8 kittens at a time. Nests of cottontail rabbits are usually located in prairie dog burrows, beneath herbs, shrubs and piles of grass.

Weighing approximately 4 pounds, a healthy male desert cottontail is generally 13 to 17 inches long. With 3 to 4 inches long ears, that are usually carried erect, these rabbits look very pleasing and cute to the eyes. As such there are not much differences between the male and females. It is a general notion that females are bigger than males. While the male rabbits roam about 10 acres of land in search of food, the area for females is restricted to just 1 or 2 acres.

Desert cottontail rabbits are herbivorous and bulk of their daily diet consists of wide range of plants. They prefer eating grass and green vegetation but in deserts they mostly rely on eating cactus, as it is a plant that not only helps these rabbits to satisfy their hunger, it also helps in restoring water in the body.

As a matter of fact, you’ll be surprised to know that these rabbits rarely drink water during their lifetime as the required amount is absorbed from the plants they eat. To fulfill their nutritional requirements, cottontail rabbits very often eat their own feces (animals that eat their own feces are called “coprophagic”). They may often eat tree barks or fruits. These rabbits are mostly active during early morning or in the evening and night owing to scorching heat that prevails in the day time.

☛ These cute little rabbits can often turn to be a matter of grave concern for local farmers owing to their dietary habits. Near industrial areas and places on the outskirts of city, where farming is prevalent, desert cottontails can feed on the entire crops of farmers spoiling all the hard work.

In most states, hunting licenses are granted to farmers so that they can prevent their crops and don’t have to suffer losses. While animal lovers criticize the step of granting hunting licenses, the abundance of these rabbits in farming areas can often cause a pain in the neck of farmers. Homemade rabbit traps and rabbit repellents are some simple and effective ways to prevent cottontail rabbits from entering the gardens or farm lands.

☛ Cottontail rabbits become alert when they sense any sort of danger. They’ll freeze in a place to confuse their predators and if the hunter or predator comes too close, they’ll suddenly start running, in random directions, at the speed of nearly 18 miles per hour (29 km/hr)! Since they’re very small, they can run for shorter distances but in zigzag paths to confuse their predators. Most of the species of cottontail rabbits have the excellent ability to swim or climb a tree.

☛ Average lifetime of a healthy adult cottontail rabbits is just two years in the wild.

☛ They’re vital for ecological balance in deserts as most of the predators like owls, hawks, foxes, coyotes, bobcats and snakes feed on them.

☛ Desert cottontails are nocturnal owing to the high temperatures in the deserts. Their light fur and blood vessels help them in radiating solar heat and thus preventing over heating.

☛ The cottontails are like an alarm signal for other rabbits in the group. When the cottontails raise their tails, exposing the white fur underside, it serves as a warning for others.

☛ Cottontail species is used in games and that’s why thousands of hunting licenses are issued in the California every year.

☛ Earlier, in some parts of South west America, these rabbits were trapped or killed for obtaining meat and fur.

☛ These rabbits are not very social but they can prefer same species groups at comfortable distances.

Read the AnimalSake article, rabbit facts for kids to know about some amusing things regarding the rabbit species. Just like any other animal, desert cottontail rabbits are an integral component of desert ecology. While hunting and killing of these animals may seem appropriate due to their ever growing numbers, it is certainly inhumane to let them die just because they’re found in abundance. It is important to research and study these cute rabbits in detail so that we can come up with better ways to handle them. 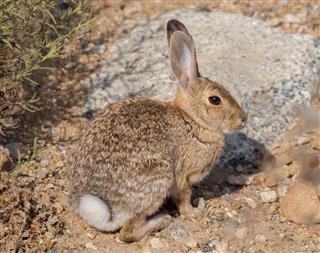 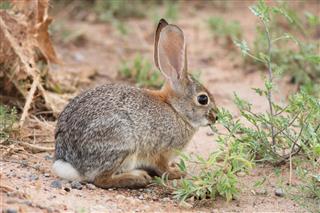 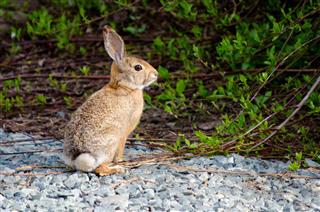