Considered as one of the nine species among the mule deer, the black-tailed deer is an elegant mammal that mostly inhabits North America. AnimalSake rolls out black-tailed deer facts that will catch your interest for sure.

You are here: Home / Uncategorized / Absolutely Delightful Facts About the Black-tailed Deer

Considered as one of the nine species among the mule deer, the black-tailed deer is an elegant mammal that mostly inhabits North America. AnimalSake rolls out black-tailed deer facts that will catch your interest for sure. 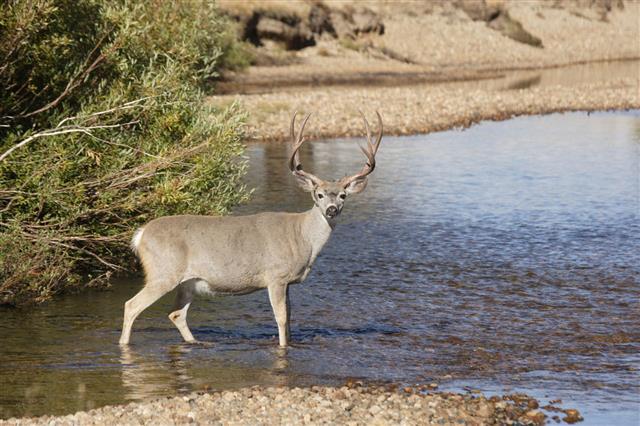 Black-tailed deer are referred to as the “Ghost of the Pacific” for their ability to move unheard and unseen through the thick rainforests of the Pacific Coast.

◆ Black-tailed deer change their coat color according to the seasons. Their coat is reddish-brown in summer and brownish-gray in winter. Their tail is completely black or dark brown. They have a white undersurface. They have large ears, which can move independently.

◆ Usually black-tailed bucks have antlers. However, in rare cases, female black-tailed deer may have antlers as well. Antlers starts developing at the age of 6-8 months. At the first stage of the growth, they are called antler buttons. They develop under a skin layer called velvet. The dried velvet peels off to show the antlers, once they are fully developed.

◆ Male black-tailed deer shed their antlers once a year between December to March to regrow them between April to August. Each year, the antlers get bigger with more branches. Antlers shed on the forest floor, which prove to be a great source of calcium and other nutrients for the animals surviving there.

The natural lifespan of the black-tailed deer is 9-10 years. However, they can live longer, e.g. 17-20 years in captivity.

These deer live in forests near the Pacific coast. They can be found on the mountains as well as near the foothills. They prefer a mild climate with a cool temperature and ample rainfall. These species don’t migrate; however, the ones living in the mountains can descend in winters.

◆ Shrubs, herbs, browse, grass, berries, acorns, nuts, and lots of green foliage comprise the black-tailed deer’s diet. It also munches on cultivated crops if it gets a chance. It dines on mushrooms and lichens as well. This deer prefers new plant growth in summer.

◆ Black-tailed deer are ruminants, which means that they have four stomachs. They can swallow their food without chewing and bring them back in the mouth to complete the process of chewing. This helps them run immediately when attacked.

Coyotes, cougars, bears, wolves, and golden eagles are the common predators of the black-tailed deer.

Black-tailed Doe with Her Fawn

◆ The mating season of the black-tailed deer is from November to December. Sparring is often seen between adult males to win a female’s attention. Female deer prefer bucks with large and heavy antlers. Also, bucks can be seen running in pursuit of females. However, with sparring and running, bucks suffer weight loss and damaged antlers.

◆ The gestation period lasts for 6-7 months. Fawns are usually born during May to June. Female deer give birth to twins in every birth. However, a single birth or triplets can also occur. Fawns weigh around 2-4 kilograms and do not excrement any scent for the first week. This helps the mother doe to keep the fawn in safety till she browses to regain her energy. Bucks don’t take care of fawns. Fawns survive on their mother’s milk initially. Fawns and mothers create a small family group. Even after their mother’s care, the fawn mortality rate is recorded as 45-70%.

◆ Their moving ears can pick up any sound that may pose a danger. If startled, these deer run with a high bounce.

◆ The black-tailed deer communicates with each other using more than 10 separate vocalizations.

◆ With vocalizations, the black-tailed deer communicates with scents. Pheromones secreted from glands located on the lower legs help them communicate as well.