How is a Possum Really Different from an Opossum?

Although possums and opossums are similar-looking animals, opossums are commonly found in the United States, while possums are native to Australia. The possum vs. opossum comparison presented here will clarify the differences between the two.

You are here: Home / Uncategorized / How is a Possum Really Different from an Opossum? 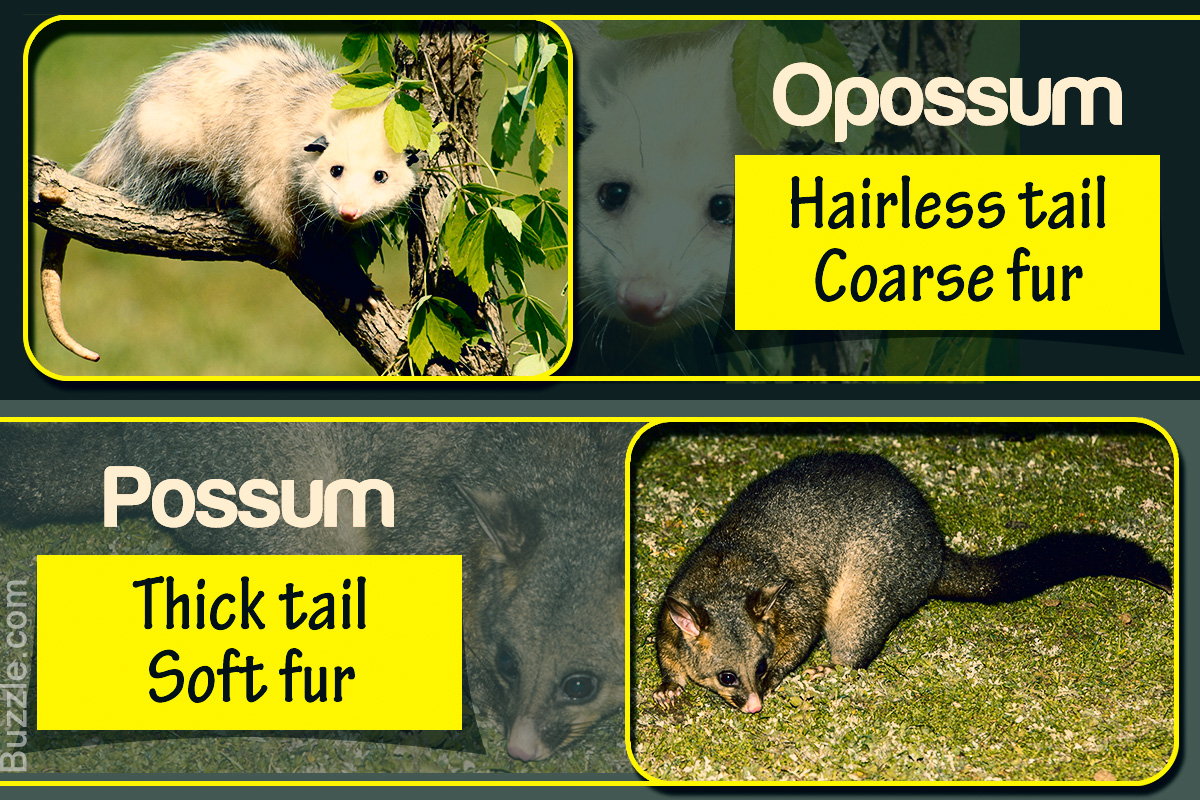 Although possums and opossums are similar-looking animals, opossums are commonly found in the United States, while possums are native to Australia. The possum vs. opossum comparison presented here will clarify the differences between the two.

Opossums are the only North American marsupials (females have pouches on their bellies to carry and nourish babies). Possums are common in the Eastern hemisphere; however, opossums constitute the largest order of marsupials in the Western Hemisphere. There exist more than 103 species of opossums, while there exist only 70 species of possums. In many parts of southern U.S., opossums are commonly known as possums. However, possums are native to Australia, New Guinea, and Sulawesi. They must have got this name as they look like the opossums of the Americas. Possums are arboreal (inhabiting or frequenting trees) marsupials, while opossums are semi-arboreal marsupials.

Opossums and possums look somewhat like rats, but they are not related to rats. In fact, they are related to koalas and kangaroos. Both possums and opossums are found in different locations and can thrive in different conditions. Opossums are also known by the scientific name ‘didelphimorphia’, derived from the Greek term ‘didelphys’, meaning double-wombed. The scientific name of Australian possums is Phalangeridae. Here is an account of possum vs. opossum. 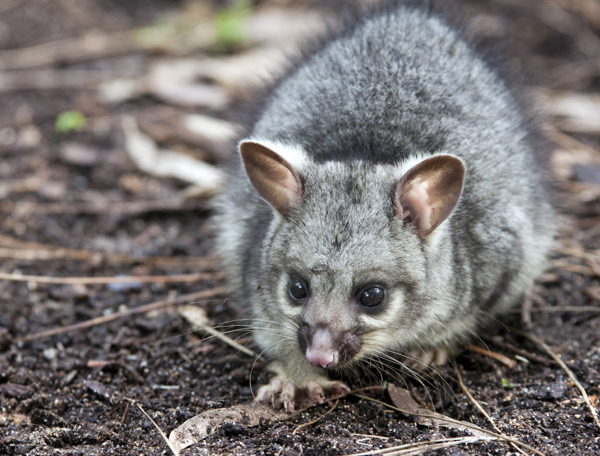 The sharp-toothed American opossum looks scary, while the Australian possum looks cute. Possum, the nocturnal tree-dweller, has a thick, bushy, furry tail (unlike opossums’ bare tail), a pointed face, protruding eyes and large, long, fox-like tapering ears. Its long claws help hold and grip branches. Possums come in various shades of gray and black, and may have white patches on their bodies (behind the eyes and ears, and on underbellies). Black possums are found mainly in Tasmania. The fur on the throat and the chest is often dark rusty red, especially in gray male possums found in Queensland. Possum fur, a medium length (5-10cm) plush type fur, is known for its softness. 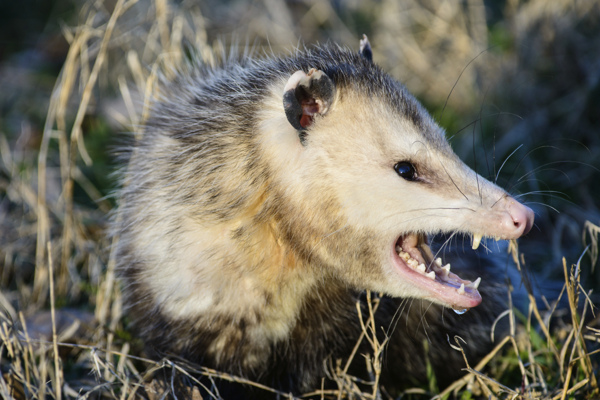 Opossums fur consists of coarse, long, flat hair, and is not suitable for clothing or interior decor. They have hairless, rounded ears and pink noses. The coat is usually of a grayish white color, although some opossums in the southeastern U.S. are darker. An opossum’s face is white. It has a triangular head, long pointed pink nose, and whiskers. An adult opossum has about 50 teeth (small incisors, large canines, and tricuspid molars), and it bares them when scared or angry. The tail is about a foot long and is prehensile. It has very little hair on it. The tail is used to hold on to objects like nesting material and tree branches while hanging upside down. Their feet look like small hands with five widely spread fingers. All the toes have a claw except for the opposable thumb on the rear foot.

Possums feed mainly on leaves; however they also consume buds and flowers, fruits, ferns, bark, fungi, invertebrates, native birds (young kea parrots) and their eggs, land snails, and carrion. Although they are nocturnal, in winter, due to starvation, they may be seen searching food in the afternoon. Sometimes, sick animals may come out in search of food in the afternoon. Ignoring old leaves, they prefer eating fresh leaves. In some areas, whole canopies (top layer consisting of new growth) of rata, totara, titoki, kowhai, and kohekohe eaten by possums.

As opossums are not good runners (with top running speed of only 7 miles per hour), they have developed amazing strategies to protect themselves from predators. If they are not able to enter burrows or climb trees quickly in an attempt to elude danger, they may bare their teeth, growl, and hiss.

A unique habit of ‘playing dead’ is found only in opossums. When an opossum is attacked and has almost no chance of escape, it will ‘play possum.’ It will roll over on its side, and with a curled body, open drooling mouth, hanging tongue, and closed eyes, it will become limp, and will give the appearance of being dead. The heartbeat would slow down, and it may also defecate. It would exude a repulsive, foul-smelling, musk like fluid from its anal glands. This condition may last for several minutes or several hours. Poking, pushing, etc., will not produce any response. This type of effective defense is usually seen in insects.

When the animal perceives that the danger has passed, it will first wiggle its ears in an effort to catch sounds. If it is sure that it is safe to get up, it will raise its head and look around. If danger persists, it will play dead again, otherwise it will run away. Predators usually like to catch a running prey. But they may bite, injure, or kill an opossum acting dead. According to a study published in the Journal of Wildlife Diseases, opossums have a considerably greater frequency of healed fractures than various other animals. Thus, opossums seem to have an exceptional ability to heal themselves.

Possum females reach sexual maturity when they are one-year-old, and males, at the end of their second year. Females usually give birth to one young a year, they may sometimes produce two. With a gestation period of just 17 – 18 days, the weight of the tiny newborn can be about 0.2 gram. It is born blind and without fur. After birth, it immediately crawls into its mother’s pouch and attaches itself to a nipple for about 70 days.

A ring-tailed possum, which has a prehensile tail, may give birth to 1 – 4 young ones. The newborn brush-tailed possums (Trichosurus vulpecula) develop and remain inside the mother’s pouch for four to five months. Young babies sit in the den or they ride on their mother’s back until they are seven to nine months old.

Male opossums have bifurcated penises, while females have bifurcated vaginae. Apart from the marsupium (abdominal pouch), females have two ovaries, two oviducts, two uteri (divided uteri) and two cervices. With a gestation period of only 12-14 days, the babies are born at a very early stage (they are as tiny as honeybees). After birth, they find their way into the marsupium to hold on to and nurse from a teat. After about 70 – 125 days, they are weaned. They detach from the teat and leave the pouch. Even after they are weaned, they continue to ride on their mother’s back. Although females give birth to a large number of young (average 23), most of them fail to attach to a teat.

Studies have revealed another interesting fact about opossums. Male opossums have incredibly low sperm counts. To overcome this flaw, opossum sperms fuse their ‘heads’ together (the process is called sperm pairing and is found only in American marsupials), because of which they get the advantage of ‘increased straight-line velocity’. They swim fast and live long.

The average natural lifespan of a possum is 5-6 years. Due to rapid aging, the opossum lifespan is unusually short for a mammal of its size, usually only two to four years.

The Australian brush tailed possum was introduced in New Zealand in 1837 to establish the fur trade, and now, there are about 30 million possums (about 7 per person!). In the 1980s, there were about 70 million possums in New Zealand, so certain measures were taken to eradicate them. They have no natural enemies in New Zealand. Moreover, plenty of food is available. That is why their numbers increased so rapidly. In New Zealand, the possum is considered as a pest and is not a protected animal. They destroy native trees and wildlife. They act as a carrier of bovine tuberculosis. They can spread this disease to cows, cattle, and deer. However, possums are protected in some Australian states. In Australia, the Leadbeater’s possum is listed as endangered.

Despite their ubiquity, Americans hardly get a chance to see this nocturnal animal. These docile, non-aggressive animals usually do not attack pets. Domestic dogs can injure or kill an opossum. However, during fights, opossums can injure domestic animals, and can spread various diseases like leptospirosis, tuberculosis, etc. They often eat pet food left outside. They can get into the garbage, and can even climb stairs easily. They can kill and eat poultry and small birds. In various states, people are allowed to control troublesome opossums using any legal means if they find them destroying their crops or other property. Opossums were once commonly eaten. In Georgia and many other states, they are considered a game animal. Opossums are often killed in road accidents. They are likely to be infested with fleas, ticks, mites, and lice. Opossum are hosts for cat and dog fleas, especially in an urban environment. However, they rarely contract rabies due to a low body temperature.

Possums are generally disliked in New Zealand, because they are destroying the native forests and are also affecting the wildlife seriously. Moreover, they have a horrible crackling growling territorial call at night. Opossums are disliked in the U.S. mainly because they are ugly. Both these animals can be a nuisance in urban areas.