You are here: Home / Uncategorized / Encyclopedic Information About the Red Racer Snake 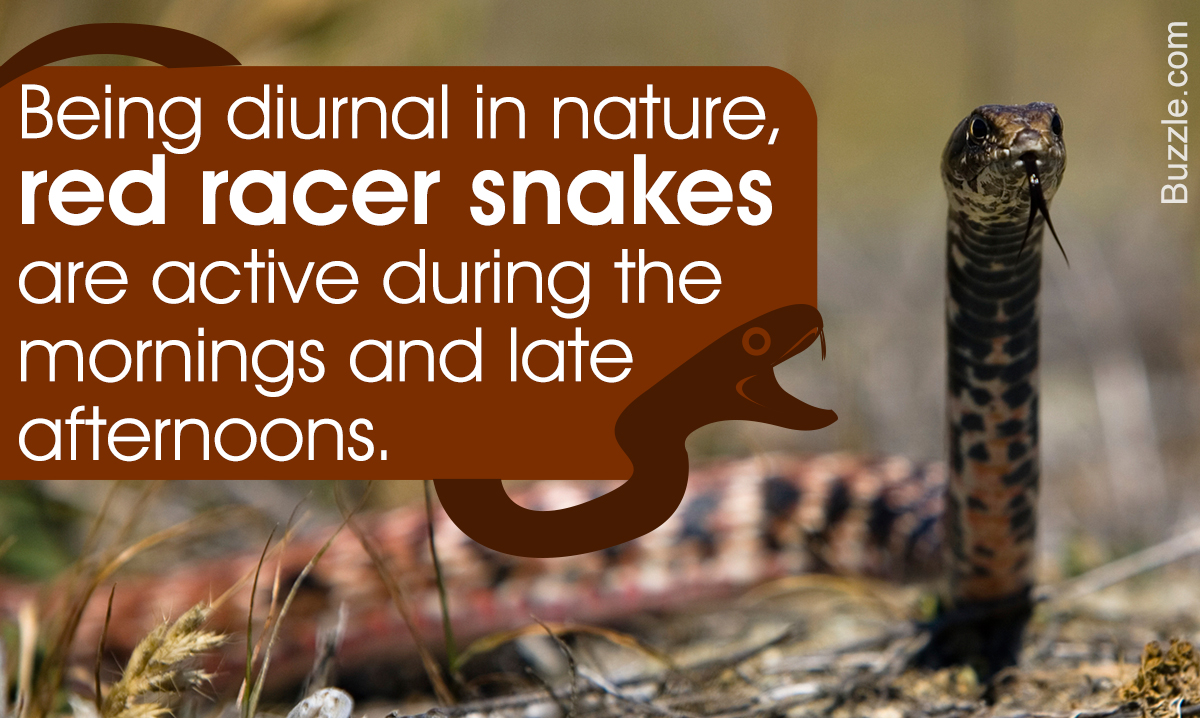 Red racers have prominent round eyes with large pupils. These snakes are easier to spot, as they actively hunt during the day. Moreover, coachwhip snakes lift the anterior third of their body at an angle of ninety degrees to the ground, which allows them to look for prey.

Native to some regions of Mexico and the United States, the red racer snake belongs to the Colubridae family. Its scientific name is Masticophis flagellum piceus. There’s some disagreement among the taxonomists regarding the genus name. At times, Coluber is used in place of Masticophis. However, Coluber is not universally accepted. The Latin terms ‘flagellum’ and ‘piceus’ mean ‘whip’ and ‘pitch black’, respectively. While the former is indicative of the whip-like appearance of the snake, the latter refers to the dark-brown or black coloration on the neck. The geographic range includes southern California, Nevada, Arizona, as well as Sonora and Baja California in Mexico. Commonly referred to as red coachwhip, the red racer snake is called so because of the presence of shades of red color on their body. It is one of the subspecies of coachwhip snakes. Other subspecies include the Sonoran coachwhip, Eastern coachwhip, Baja California coachwhip, Line coachwhip, San Joaquin coachwhip, and Western coachwhip. Besides being slender, these snakes are known for their speed.

✦ Red racer snakes could be red, rusty red, orange-tan, or olive-brown in color. The anterior section of the body has dark brown or black cross bands.

✦ Their large eyes are responsible for their sharp vision.

✦ The name ‘coachwhip’ is attributed to the braided, whip-like appearance of its tail.

✦ These snakes are slender. An adult red racer could extend up to 100 inches in length, and weigh up to 4 pounds.

✦ They are alert and aggressive, when it comes to hunting. They can move at the speed of 4-7 miles per hour.

✦ Being ectothermic (cold-blooded), these snakes don’t have an internal mechanism to adjust to the temperature changes in the environment. Therefore, these are able to move faster when the weather is warm. They might come out to bask in the sun.

Red racers can be found in different habitat types such as grasslands, deserts, coastal scrub, chaparral, and creosote scrub. They are common in deserts and coastal southern California. They prefer open areas and avoid the areas with dense vegetation. These can be found crawling during the day. At night, these hide in crawlspaces, vegetation, gaps beneath rocks, or rodent burrows.

Red coachwhips feed on bird eggs, birds, lizards, snakes, amphibians, small rodents, and small mammals. They prefer live prey, but might eat carrion (dead animals). Baby red racer snakes or hatchlings feed on insects, spiders, or scorpions. They are mostly seen on the ground, but can climb on trees or shrubs to catch their prey or escape predators. After capturing its prey, the snake uses its jaw to crush it or pins it under its coils. It must be noted that this snake is not a constrictor, which means that it does not squeeze its prey to death.

Unlike ovoviviparous reptiles, wherein the eggs are hatched inside the mother’s body, the red racer snake is oviparous. This means that this snake lays eggs. The eggs are laid in early summer. The clutch size ranges from 4 to 20 eggs. They hatch within 45 to 70 days. A hatchling or a baby red racer snake is around 13 inches (33 cm) long. Its weight might range from 6.3 to 23.8 ounces. The characteristic black stripes or marks are not present on a newborn.

The red coachwhip is non-venomous snake, but it can become quite aggressive when threatened. Moreover, it might sometimes give an impression of being aggressive, as it moves at a fast speed. It must be noted that red racers can attack and bite, thereby drawing blood. Their bite can be painful. Problems can arise if the bite gets infected. So, make sure that you take precautions if you spot one.