Cool and Quirky Facts About the Interesting Ring-tailed Cat

The ring-tailed cat (or ringtail) is a mammal of the raccoon family, and therefore not a cat! It is native to the arid regions of Arizona, North America. AnimalSake further jots down some of the most interesting facts about these ring-tailed cats.

You are here: Home / Uncategorized / Cool and Quirky Facts About the Interesting Ring-tailed Cat 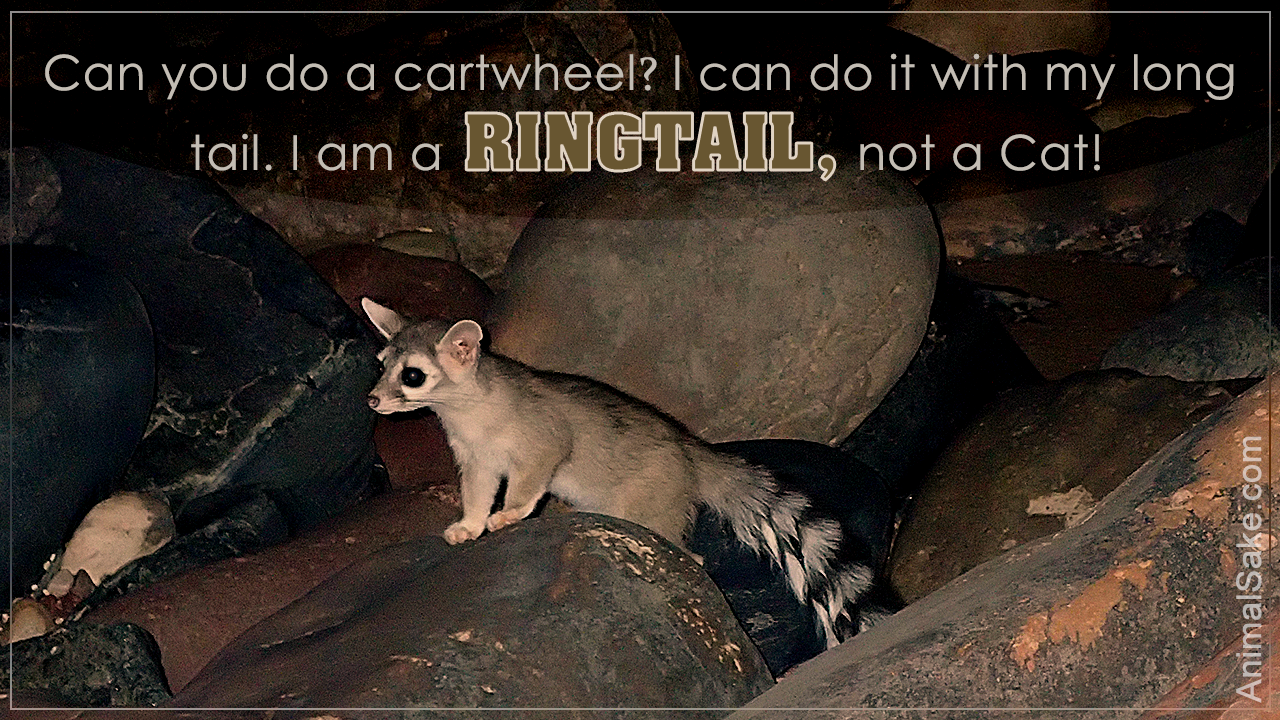 The ring-tailed cat (or ringtail) is a mammal of the raccoon family, and therefore not a cat! It is native to the arid regions of Arizona, North America. AnimalSake further jots down some of the most interesting facts about these ring-tailed cats.

People mistakenly consider the civet cat as a ring-tailed cat. The civet cat, which is a nocturnal mammal native to tropical Asia and Africa, may look like a ringtail, but belongs to an altogether different family.

A small carnivore, scientifically named Bassariscus astutus, belonging to raccoon family (Procyonidae) is nocturnal and about the size of a domestic cat with a racoon-like tail and resembles a small fox. It is one of the smallest extant procyonids.

♦ A ringtail is also known as miner’s cat, or the marv’s cat. The scientific name of the ringtail translates to ‘cunning little fox’, although this is a different species. Let’s get familiar with the ringtails.

The ringtail has many identifying features. It has a gray face with whitish patches. Some of them are buff to dark brown in color. The eyes are large, surrounded by white rings of fur. It has large, rounded ears, a grayish-colored body, a long tail with alternating bands of white and black fur, and short legs.

The ringtail predators include fox, horned owls, coyotes, and bobcats.

Ringtails are excellent climbers capable of ascending vertical walls, trees, rocky cliffs, boulders, and even cacti. They can descend at steep angles, rotating their hind feet 180 degrees, giving them a firm grip for descending and doing quick changes in any direction. They have an excellent eyesight as well as hearing, and a keen smelling sense, all being helpful adaptations for a nocturnal animal.

They live in many habitats, but they prefer rocky areas (sometimes associated with water) like canyons, caves, stone fences, mine shafts, and talus slopes. They also adapt well in disturbed areas and have also been observed living in buildings.

They are found in southern states of Arizona, Central America, California, Colorado, Southwestern Oregano, Nevada, New Mexico, Oklahoma, and Utah. But there are species that extend into Texas and Kansas. Very few know that the ringtail is the state mammal of Arizona.

A ringtail will live around 6 to 9 years in the wild, while in captivity, it has been seen living for up to 15 years.

Ringtails are omnivorous, which means they’ll be fine with just about anything. Some of their food choices include fruits (hackberries and mistletoe), insects, birds, lizards, snakes, and mammals like squirrels and mice.

The mating season of this species is from February to May. Its gestation period lasts for 51 – 53 days, during which the male will procure food for the female. There will be 2 – 4 cubs in a litter. The newborns open their eyes after a month, and start hunting after four months. They reach sexual maturity at ten months. In their mating rituals, both males and females mark their territory with urine and feces usually near their dwellings. These markings act as “calling cards” that deter competition in members of the same sex and attract reproductive partners in members of the opposite sex. The ringtail cat is mostly solitary, choosing to be alone except during the mating season.

It is not at a high risk of extinction. The main threat to the species is that it is legally trapped for fur in Arizona, Texas, Colorado, and New Mexico. Other threats come from collision with vehicles. They are susceptible to diseases like rabies, toxoplasmosis, and canine parvovirus transmitted by feral cats and dogs.

The ring-tailed cat are fully protected in California. Studies show that various land management strategies have been incorporated, focusing on the vegetation and structure of canyon and slopes, maintaining areas of forests with suitable trees.

The ring-tailed cat can survive in hot, arid areas with little drinking water. Well, we hope that you are acquainted with significant facts about this mammal, after reading this extract.