Facts About the Komodo Dragon That Kids Would Enjoy Reading

Komodo dragons are the largest lizards living on this planet. They are voracious eaters and have achieved the top position of the food chain in their habitat.

You are here: Home / Uncategorized / Facts About the Komodo Dragon That Kids Would Enjoy Reading

Komodo dragons are the largest lizards living on this planet. They are voracious eaters and have achieved the top position of the food chain in their habitat. 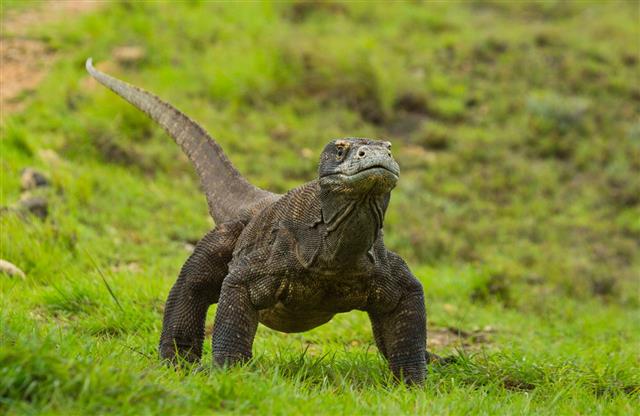 Komodo dragons are one of the most interesting creatures that walk on land. Although named dragon, they share little similarity with these mythical creatures. In fact, these animals are the biggest living lizards in the world. They are on the vulnerable species Red List of IUCN (International Union for Conservation of Nature) and considered an endangered species by CITES (Convention on International Trade in Endangered Species). 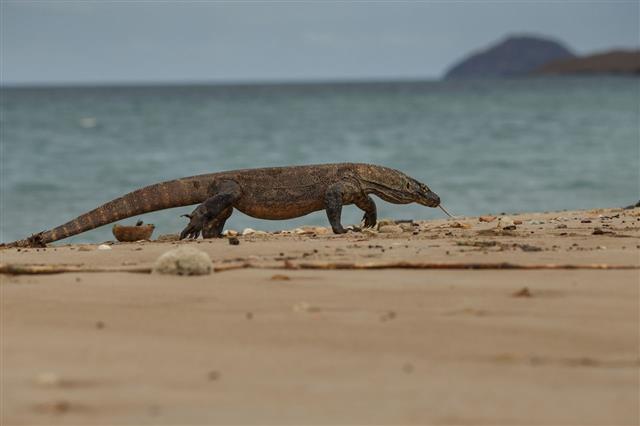 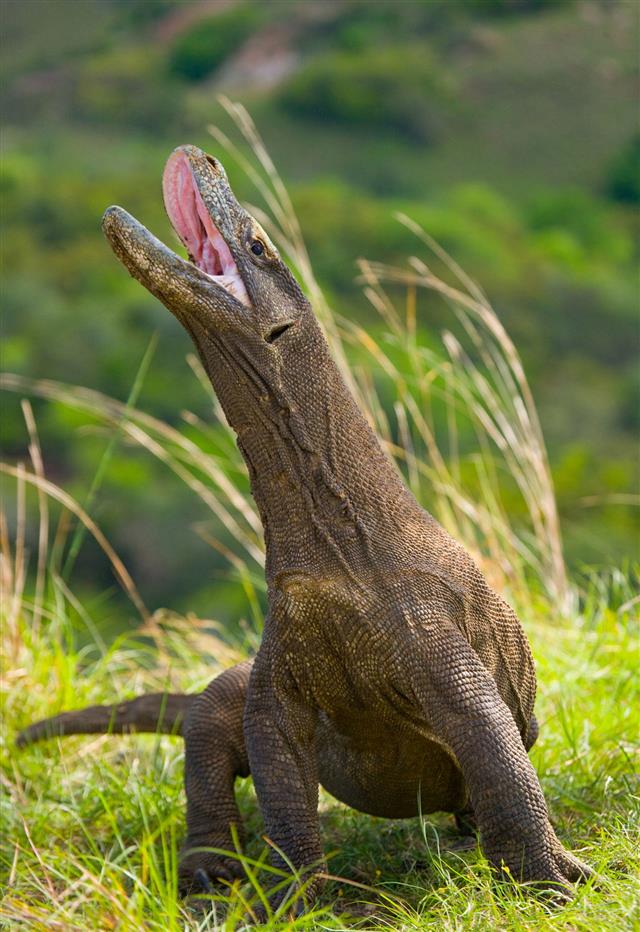 Komodo dragons are descendents of giant monitors which lived in Australia around 3-4 millions years ago. Over the course of several millennia, these land-based lizards dispersed towards the west in order to survive habitat loss and poaching from humans.

Scott Hocknull (the Senior Curator of Geosciences, Queensland Museum in Brisbane) and his colleagues estimate that Komodo dragons moved to the Indonesian islands around 900,000 years ago. 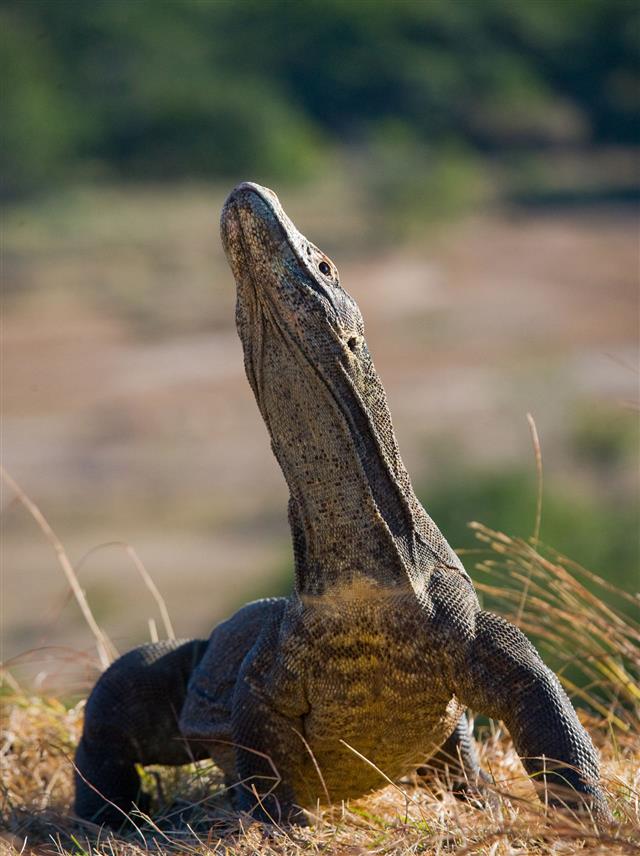 Though they share a common ancestor with dinosaurs called Diapsids, Komodo monitors are not related to the dinosaurs. Diapsids branched out into different classes: one containing dinosaurs, birds, etc.; another one with lizards, snakes, etc.

Komodo dragons were discovered by the western world when a pilot of WWI crash landed in one of the Lesser Sunda Islands and spotted these extraordinary creatures.

In 1910, the rumors of lizard-like creatures reached Lieutenant van Steyn van Hensbroek of Dutch Infantry who was then based in Flores. Subsequently, he was able to catch a small Komodo. Some pearl fishermen also reported seeing gigantic, prehistoric animals living in the Komodo Island.

In 1926, the American Museum of Natural History organized an expedition in order to explore the truth behind the tales of giant monitor lizards. The expedition, which was led by W. Douglas Burden, was successful and brought back 12 dead specimens and two live ones. It was Burden who is credited for naming these giant monitors as Komodo dragons.

The tongue is forked, just like snakes. Komodo dragons make use of their tongue to smell any carrion (dead animal) in the vicinity. They stick their tongue out to taste the air and pick up scents. Then, the forked tongue touches the roof of the mouth which is connected to the Jacobson’s organs (an organ that aids in detecting smell) in order to sniff out a meal. 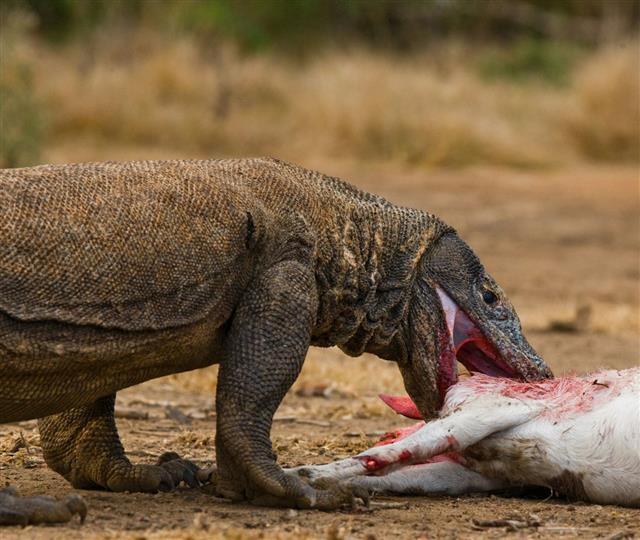 They use their sharp claws and curved teeth to bite into their prey. As they have serrated teeth, the meat gets caught between their teeth easily and decays, leading to the growth of fatal pathogens 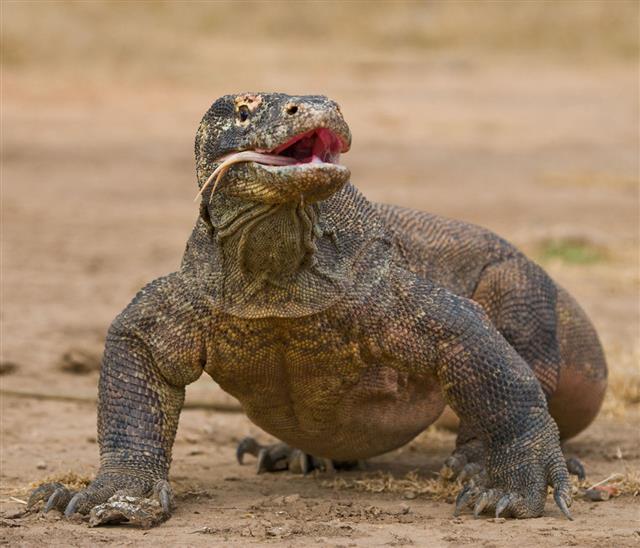 Komodos have good vision during the day and can see up to approx. 900 feet away. However, they are known to have poor night vision. That’s why, they prefer to hunt during the day. They can see a moving object more clearly than a stationary one. This trait helps them in catching a prey. They see colors clearly, but not in bad light.

Their saliva which is reddish in color is known to be deadly as it carries around 50 infectious agents, particularly bacteria. If a prey manages to escape from the attack of a Komodo dragon, it will not stay lucky for long as the deadly bacteria in the monitor’s saliva will eventually kill it. The attacking Komodo dragon follows the bitten prey at a leisurely pace and devours it after the prey succumbs to death. 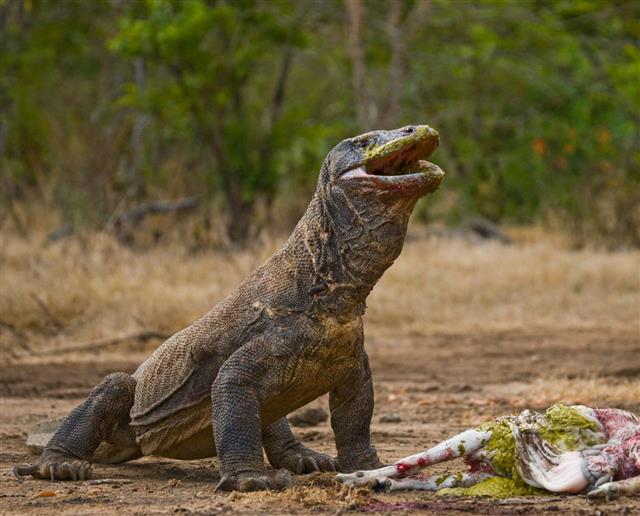 Although scientists believe that the Komodo’s preys mostly die from blood poisoning from their deadly saliva, the latest studies on these reptiles shed light on their equally fatal venom. After chemically analyzing the venom of two dead Komodos, a team of venom researchers at the University of Melbourne credited the poison to be the real culprit behind killing the Komodo’s preys. The venom is reported to lower blood pressure, hasten blood loss, and sends the incapacitated animal into shock. 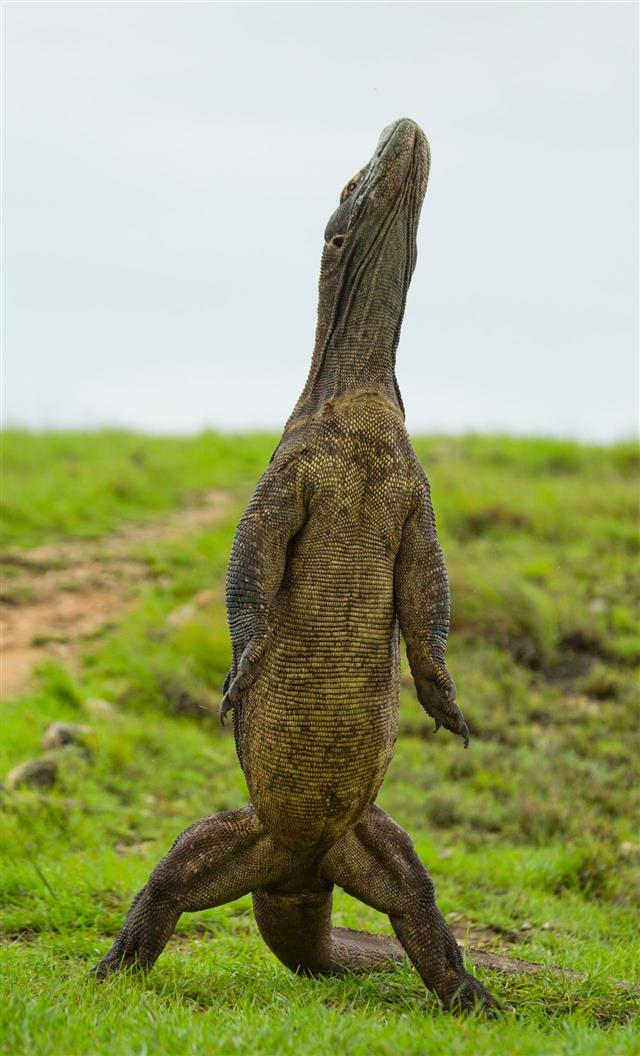 Their hearing is less developed than their other senses. Therefore, they don’t tend to rely on this sense. Hearing abilities consists of only a small range of frequencies. 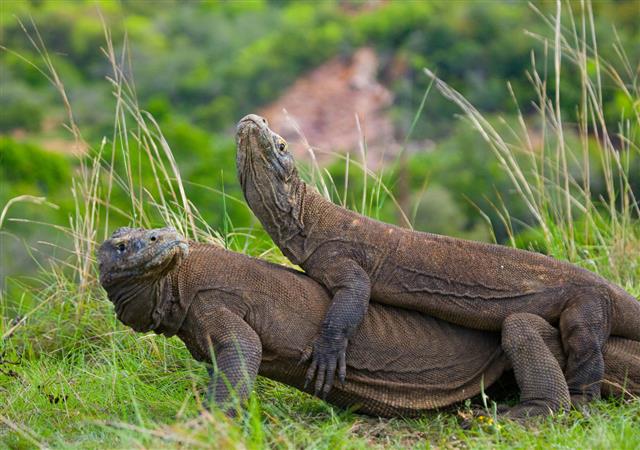 The males are generally 10 ft long and weigh around 200 lb, whereas females can reach up to 5 to 7 ft and weigh around 150 lb. The males have a distinct scale pattern which is present at the base of their tail.

They are good at climbing too and can ambush even medium to large-sized animals. They can consume a prey which is more than 80% of their body weight.

During rainy seasons, they remain inside burrows in order to preserve their heat. Komodos make use of burrows made by other animals like rodents, palm civets, porcupine, etc.

Komodos are cannibalistic in nature. That means, they can eat old, injured, or young Komodos who are unable to fight to protect themselves. Baby Komodos stay on trees after hatching from eggs in order to escape becoming the meal of an adult Komodo. They remain safely on the tree as adults are too heavy to climb. The young ones feed on tree dwelling animals, birds, and insects. 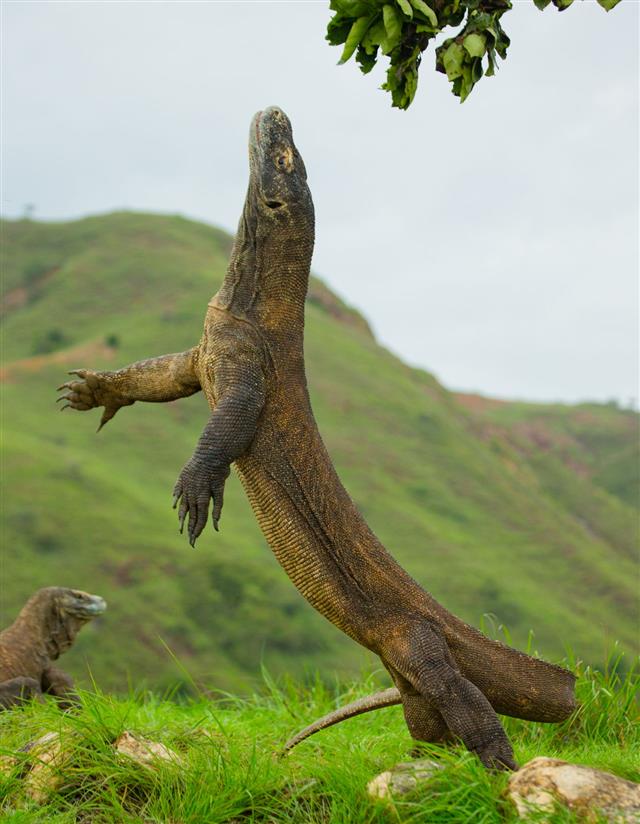 Komodo dragons became big in size as they are the biggest predators on these Indonesian islands and do not face any competition from other species over food. Scientists also believe that their large size was an evolutionary adaptation which happened mainly to help them feed on dwarf elephants who were inhabitants of these islands. 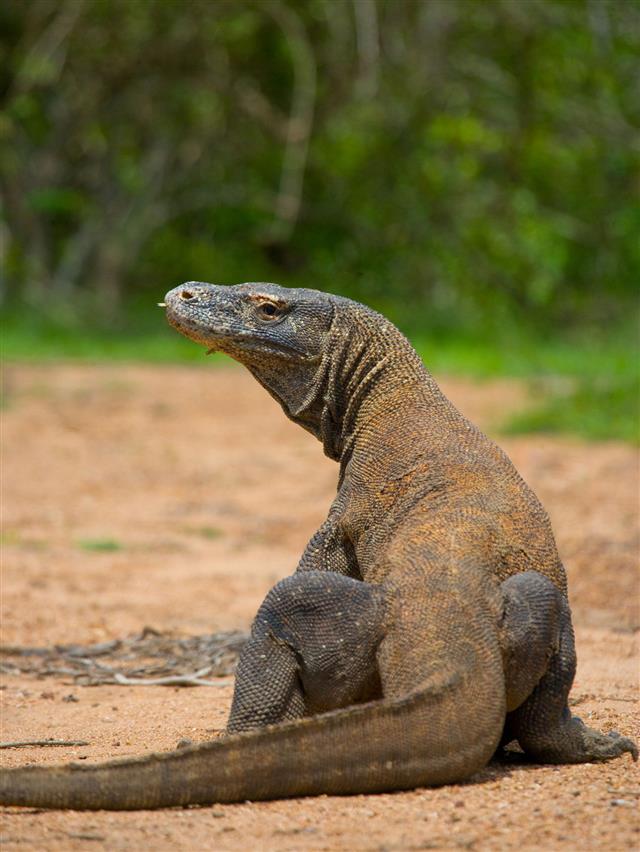 According to an estimate, Komodo Island is home to 1700 giant monitors whereas Flores contains around 2000 more. The islands of Rinca and Gili Motang have 1300 and 100 Komodos respectively. Human population on these islands is negligible.

They require very limited amount of water to survive and can live without food for weeks.

The female lays around 15 to 30 eggs by digging a hole in the ground. The eggs are not hard like a hen’s. They are rubbery and expand as the baby grows. They resemble a balloon that is filled with water. They hatch in 9 or more months if the temperature is right. They usually hatch in the month of April and use a special tooth, called an egg tooth, to crack the egg open from inside.

After hatching, the babies take shelter on trees and stay there. The female protects the eggs; however, as soon as the eggs hatch, her role as a parent ends. Though Komodo dragons procreate through sexual reproduction, some cases of parthenogenesis (asexual reproduction that is quite common among insects and certain reptiles) have been reported in zoos.

Because of their prehistoric appearance and ferocious nature, Komodos have become popular attractions in zoos worldwide. Presently, there are approximately 50 Komodos in USA in various zoological parks. Captive breeding programs are being carried out in order to increase their population. It was the Smithsonian National Zoological Park which exhibited a Komodo dragon for the first time in 1934. However, the Komodo survived only for two years there.

They are also known to be dangerous to humans. There are several documented cases of humans becoming prey to these aggressive animals. In one case, a German tourist was mauled to death by Komodos. In another incident, a park ranger was attacked by Komodo while he was doing some paperwork in his hut. The ranger narrowly survived after receiving serious injuries.

Zookeepers have noticed that the Komodos are capable of recognizing one human from another and are less aggressive in captivity. However, their tameness can be deceptive as found by Phil Bronstein, executive editor of San Francisco Chronicle, who received a serious foot injury after he was invited inside the cage of a Komodo by the zookeeper.

In zoos, they are prone to infectious and parasitic diseases. In fact, their life span gets reduces considerably in captivity. Komodos and their discovery served as an inspiration for the original King Kong movie.

Sadly, these reptiles are in threat of disappearing from the face of the earth due to human encroachment of their habitat, lack of food sources, etc. Moreover, natural calamities like volcanic eruptions, earthquakes, tidal waves, and forest fires contribute to their dwindling population. 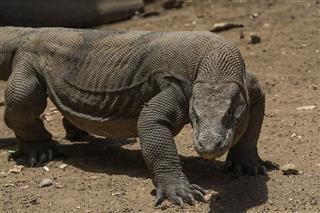 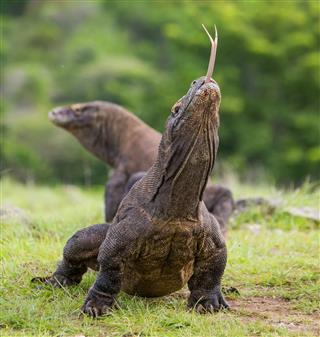 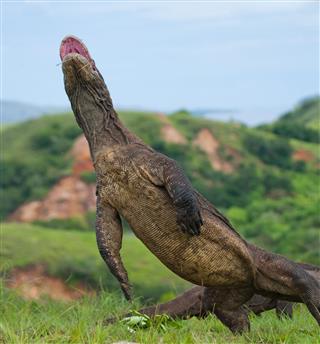 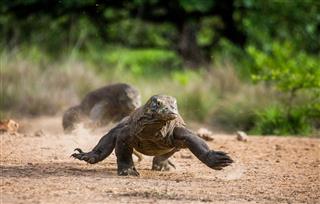 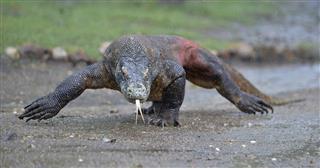 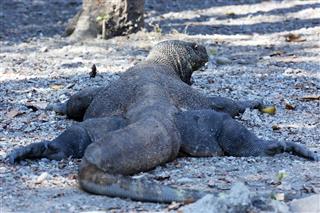 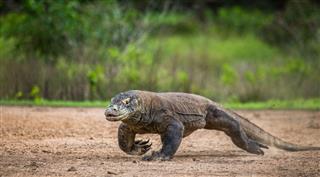