Snakes are universally feared and loathed as poisonous and deadly beasts. However, most people don't know that most of them are, in fact, nonvenomous. Here's more about some nonvenomous snakes.

You are here: Home / Uncategorized / An Incredible List of Nonvenomous Snakes With Pictures 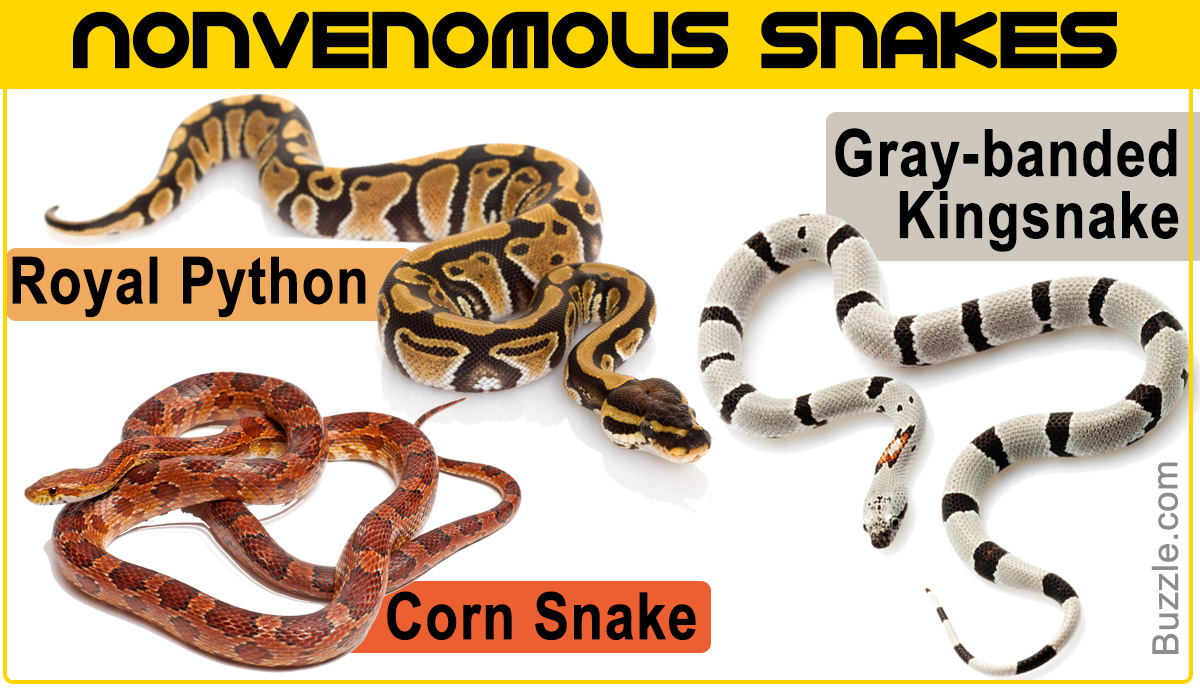 Snakes are universally feared and loathed as poisonous and deadly beasts. However, most people don’t know that most of them are, in fact, nonvenomous. Here’s more about some nonvenomous snakes.

While venomous snakes are commonly called poisonous, they produce their own ‘poison’, which makes them ‘venomous’ as opposed to ‘poisonous’. Animals that accrue toxic substances from their environment, instead of creating them in their own bodies, are called ‘poisonous’.

Snakes. Slithering, repulsive masses of deadly venom, chill-inducing hisses, and scary background music! That’s how these wonders of nature are regarded in much of the world. Although they are extremely timid and almost always scared of humans, they are portrayed as bloodthirsty killers. Their fascinating evolution of legless locomotion, which has allowed them to become some of the most successful hunters in the world, has made them scary and loathsome.

While most people are afraid of snakes due to their fear of snake venom, the reality is that about 85% of snake species are nonvenomous. Unlike venomous snakes, they sometimes eat their prey alive, or kill it by constricting. Even in the snakes that are venomous, the venom of many is too weak to have any effect on humans.

Here’s a list of some nonvenomous snakes, along with some basic info about them.

One of the scariest types of snakes, and among the largest, pythons, united under the Pythonidae family, are nonvenomous. They rely on the well-known mechanism of constriction to kill prey, although the mechanism is not used to crush bones, contrary to popular misconception. The constriction actually suffocates the victim, drawing the noose closer with each exhalation of the unfortunate animal. A largely unsupported theory also states that the pressure of a python’s coils could cause a cardiac arrest, thus becoming the proximal cause of death.

All pythons are nonvenomous, without exception. Instead of the typical fangs seen in venomous snakes, pythons have many sharp, serrated, backward-curving teeth. This dentition allows them to grab hold of a prey, with the backward curves of the teeth preventing its escape. Once a prey is caught, a python quickly coils around it, and when the prey stops moving, it is swallowed whole, though it may only be unconscious.

Boas, constituting the boidae family, are also constrictors. They catch live prey with teeth similar to pythons, and wrap their powerful, muscular bodies around it. They are found largely in the New World, in addition to isolated regions in the Old World, such as Madagascar and the Solomon Islands. The anacondas, forming the Eunectes genus, are strong contenders for the title of the largest snake in the world.

The Boidae family consists of 4 subfamilies, among which the Boinae (true boas) and the Erycinae contain the bulk of the species; eight out of eleven genera in the family are found in these two families, with two genera in Sanziniinae and one in Candoiinae.

Made up of the eleven species of the Lampropeltis genus, kingsnakes are common all over the USA. They are popular in the pet trade due to the numerous naturally occurring color morphs they can have, their docile nature, and easy upkeep. Milk snakes, one of the species of kingsnakes, are popular as coral snake lookalikes―looking like a venomous snake has obvious benefits for a nonvenomous snake―but no kingsnake is venomous. In fact, kingsnakes are immune to many types of snake venom, and regularly prey on other snakes, including rattlesnakes.

Both Old World (found in Afro-Eurasia) and New World (found in the Americas) rat snakes are nonvenomous. Due to this, many rat snakes are also popular as pets. Corn snakes, in particular, are one of the easiest unconventional pets. A large majority of rat snakes don’t possess venom, and the venom of the few that do is so weak that it is not even used as the main weapon for hunting.

These snakes rely on constriction to hold and kill their eponymous prey (rodents). They are welcomed in farmlands, since they keep the pest rodent population down and pose no threat to the humans.

The three species in the Coronella genus, found all around the Mediterranean, including most of continental Europe (as far north as southern Scandinavia), North Africa, and western Asia, smooth snakes are nonvenomous colubrids.

Making up the Drymarchon genus, indigo snakes are found in southeastern United States, and Central and South America. Like many colubrids, they are harmless to humans.

Constituting the monotypic genus Anilius and the monotypic family Aniliidae, the false coral snake (A. scytale) is another mimic of the coral snake, like the milk snake. It is found primarily in the Amazon rainforest, as well as in the surrounding regions and the Caribbean islands. Though it looks similar to a coral snake, it is easy to differentiate between the two, due to the nature of their differing patterns.

Found in southwestern United States and Mexico, the glossy snake (Arizona elegans) makes up the monotypic genus Arizona. They look similar to gopher snakes, but are smaller than them.

Found all over the world in varying habitats and conditions, snakes from the Coluber genus are called ‘racers’ or ‘whipsnakes’. This genus contains a number of snakes that can’t be shifted unanimously to another genre. Snakes from this genus are found in the Americas, north Africa, continental Europe, as well as the Indian Subcontinent.

This group refers to snakes from the Nerodia genus. It shouldn’t be confused with sea snakes, which are among the most venomous snakes in the world. The 9 species in the genus are all native to North America and are named due to their liking for a semi-aquatic habitat. They are stout snakes (though nowhere near as stout as boas or pythons), and have a reputation for their temper.

These were some of the prominent nonvenomous snakes in the world. It should be noted that even though they are nonvenomous, many of these snakes, particularly pythons and boas, are stoutly built and have sharp teeth that can cause severe injuries. Pythons may also consider juvenile or even adult humans as prey. So, even though they don’t carry the threat of venom, it is better to let them be, and observe them from afar.