39 Seahorse Facts That Will Change Your Perception About Them

Evolution has caused several mind-boggling adaptations in the seahorse, which make us question the black and white findings of scientific research.

You are here: Home / Uncategorized / 39 Seahorse Facts That Will Change Your Perception About Them

Evolution has caused several mind-boggling adaptations in the seahorse, which make us question the black and white findings of scientific research. 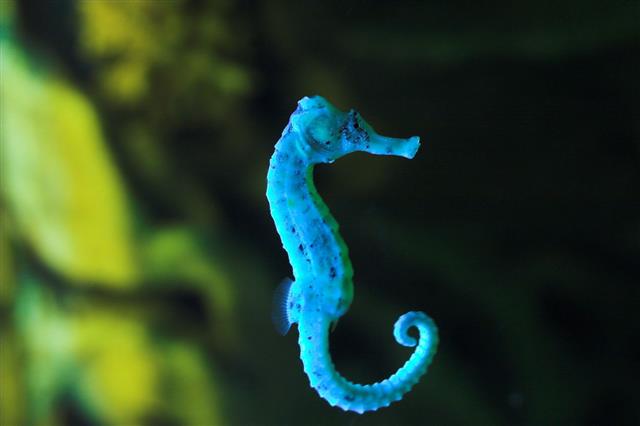 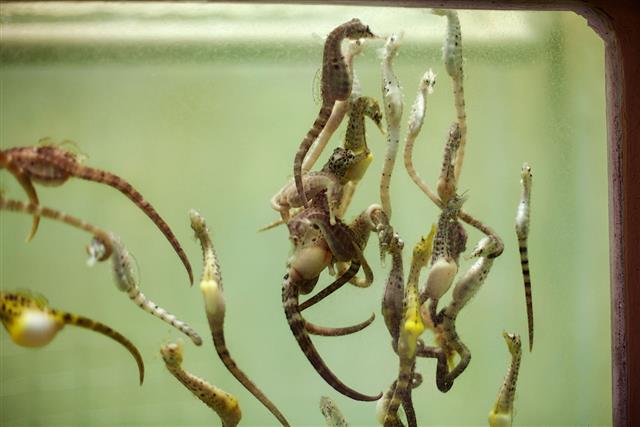 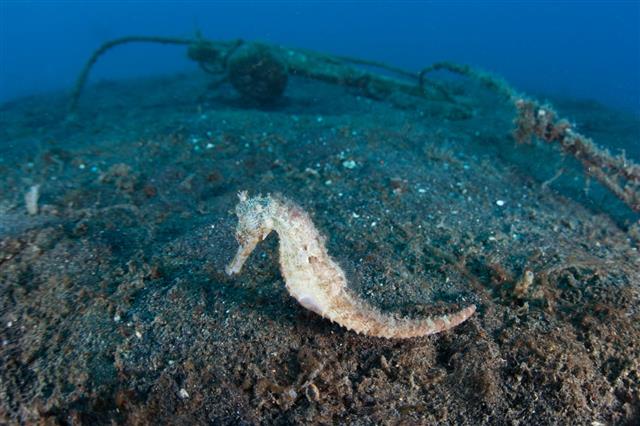 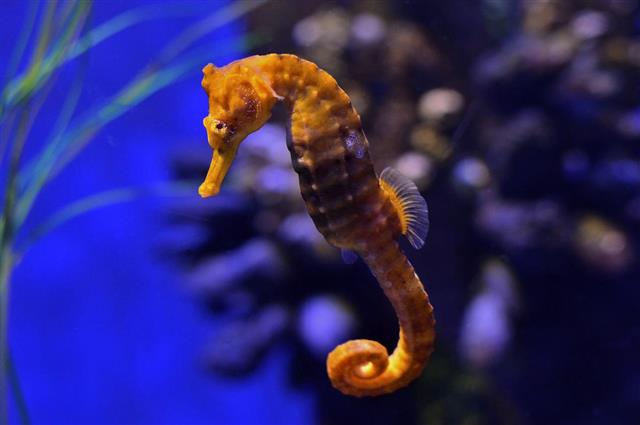 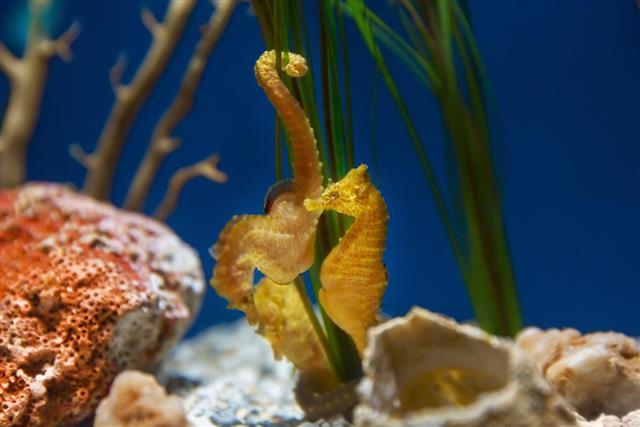 The slowest fish in the world is the dwarf seahorse, which is capable of covering only 5 feet in 60 minutes.

Seahorses belong to the family of syngnathidae. This word is a combination of two Greek words ‘syn’ meaning fused, and ‘gnathus’ which means jaws. Belonging to the hippocampus genus, the seahorse is closely related to the pipefish. The term ‘hippos’ means horse and ‘campus’ means sea-monster, in Greek. There was a lot of confusion surrounding seahorses during the earlier years of scientific research. Some books claimed that these peculiar animals were insects, while some called them shellfish.

Today, seahorses are considered as a complete fish; with fins, gills, and a swim bladder. Seahorses look very different from other fish. With its equine head, prehensile tail, marsupial-like pouch, and independently moving eyes; the seahorse is truly a unique fish.

The seahorse is elusive and seeks shelter among coral reefs, seaweed, mangroves, and estuaries.

Seahorses are usually found in shallow tropical and temperate waters across the world. Their population is dense in the coastal areas and especially where seaweed, such as eel grass grow in plenty.

Seahorses are carnivorous and feeds on small crustacea, which include daphnia, cyclops, larvae, and mysids.

Seahorses make a distinctive click while feeding, which can also be heard during territorial disputes between males, and during courtship.

Seahorses have camouflaging qualities, which makes it difficult to spot them!

Seahorses have peculiar eyes which move independently of one another, thus, giving them the ability to detect predators and food from the front and back.

Seahorses are bony fish and have an exoskeleton, with no scales. The ringed interlocked plates on their body is covered by a thin layer of skin.

The number of rings on their frame varies from one species of seahorse to another.

Unlike any other fish, seahorses have flexible, long, and well-defined necks.

Seahorses are unable to curl their tail backwards and do not have caudal fins.

Apart from razorfish, seahorses are the only other fish that swim upright/vertically. However, they are very poor swimmers and can easily die of exhaustion.

Seahorses beat their dorsal fins back and forth to propel themselves through the water in an upright position.

The pectoral fins of the seahorses are used for steering and turning.

Seahorses use their long snout to suck food. Everything that is consumed gets rapidly passed through their digestive system, because they do not have a stomach and teeth. Thus, seahorses need to constantly feed in order to live.

Seahorses’ snout are capable of expanding so as to suck a prey that is slightly larger than the snout itself.

Seahorses breed frequently and are not monogamous. While some species may show more fidelity during a breeding season, others show no such preference for one specific mate. The mates come together for the purpose of courtship, a process which can last several days.

Male seahorses prefer larger females, therefore, they may abandon smaller/weaker mates if they find bigger females to mate with.

Also known as the predawn dance, the two seahorses will synchronize their movements, dance, change their colors, twirl around with linked tails, and wrap their tails around a coral or single strand of sea grass.

The courtship behavior of the seahorse is believed to help mature the female’s eggs and prepare the male to receive them.

The mating actually takes place during the ‘true courtship dance’. In this final phase of courtship, the male and female detach from the coral or blade of grass and rise up together while being snout-to-snout. Thereafter, the male puffs its pouch with water, so as to display that it is empty and ready for receiving the eggs.

During mating, the female seahorse’s ovipositor deposits thousands of eggs into the male’s ventral brood pouch. This mating process usually last for 7-8 hours. Thereafter, the male releases its sperm in the water around itself, which is quickly absorbed by the pouch to help fertilizes the eggs.

Once the eggs are deposited, the size of the female seahorse shrinks and the male becomes bigger. The pair gently descend back into the corals, after which the female returns to her own territory.

Once the seahorses’ eggs are fertilized, they get embedded in the wall of the pouch and are protected by a layer of soft tissue. The male provides the eggs with oxygen, the hormone prolactin, and sufficient incubation.

The female seahorse comes to visit the pregnant male seahorse everyday in the morning during the 2-4 week gestation period. They meet for 5-10 minutes, during which time they intertwine their tails in order to greet one another.

Depending on the size of the species, male seahorses usually give birth to an average of 100-1000 young fully developed seahorses. The smaller species of seahorse may give birth to only 5 young ones.

It is the male seahorse that gives birth to young ones, thus, making it the only species on Earth to do so.

The male seahorse gives birth through muscle contractions and always at night. Surprisingly, it is ready to receive a new batch of eggs the very next morning.

The young seahorses are not nurtured by either parents and are left to fend for themselves. Out of the thousands born, fewer than 0.5% make it to adulthood. The rest fall prey to predators, ocean currents, unfavorable temperatures, etc.

The newborn seahorses spend their few weeks living and feeding amidst the plankton layer.

International protection was provided to seahorses on May 15th, 2004.

The territories of males and females overlap, therefore, they interact often. However, females being usually bigger require to inhabit a territory that is 1.5 sq meters large, whereas, males make do with 0.5 sq meters.

The dorsal fin of the seahorses moves 30-70 times per second.

Zebra stripes and spots are the only two patterns that can be seen on various species of seahorse.

A group of seahorses are known as ‘a herd’.

The average lifespan of the seahorses in the wild is estimated to be 1 to 5 years.

A fleshy appendage known as ‘cirri’ can grow on the skin of this fish. This appendage acts like a camouflage by resembling corals and weed. The pygmy seahorse (hippocampus bargibanti) is a good example of a species that uses cirri to expertly camouflage itself.

Although new species of seahorse continue to be found, 53 species have been acknowledged by the ‘World Register of Marine Species’.

More than twenty-five million seahorses are caught every year for consumption and for making Asian traditional medicine. Their incessant fishing and depletion of coral reefs has resulted in the near-extinction of many species of seahorse. 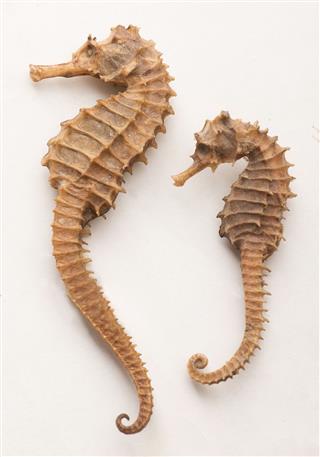 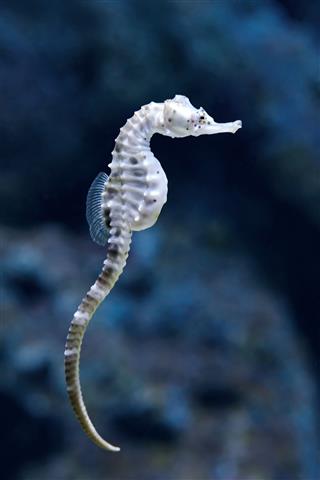 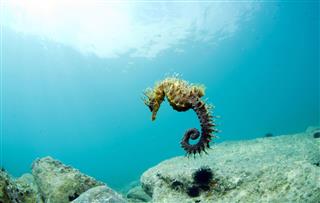 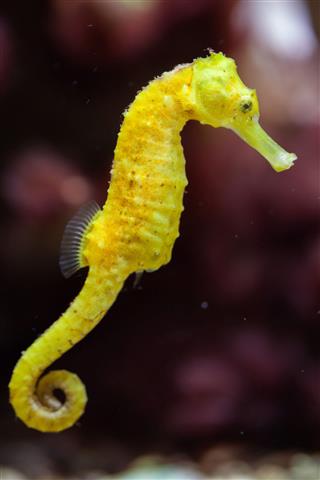 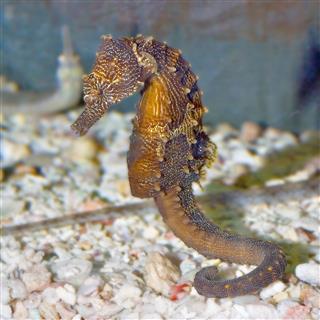 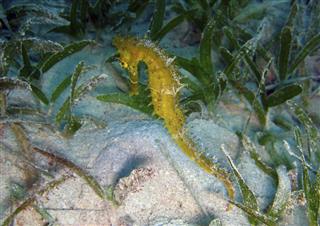