Intriguing Things You Need to Know About the Goliath Grouper Fish

You are here: Home / Uncategorized / Intriguing Things You Need to Know About the Goliath Grouper Fish 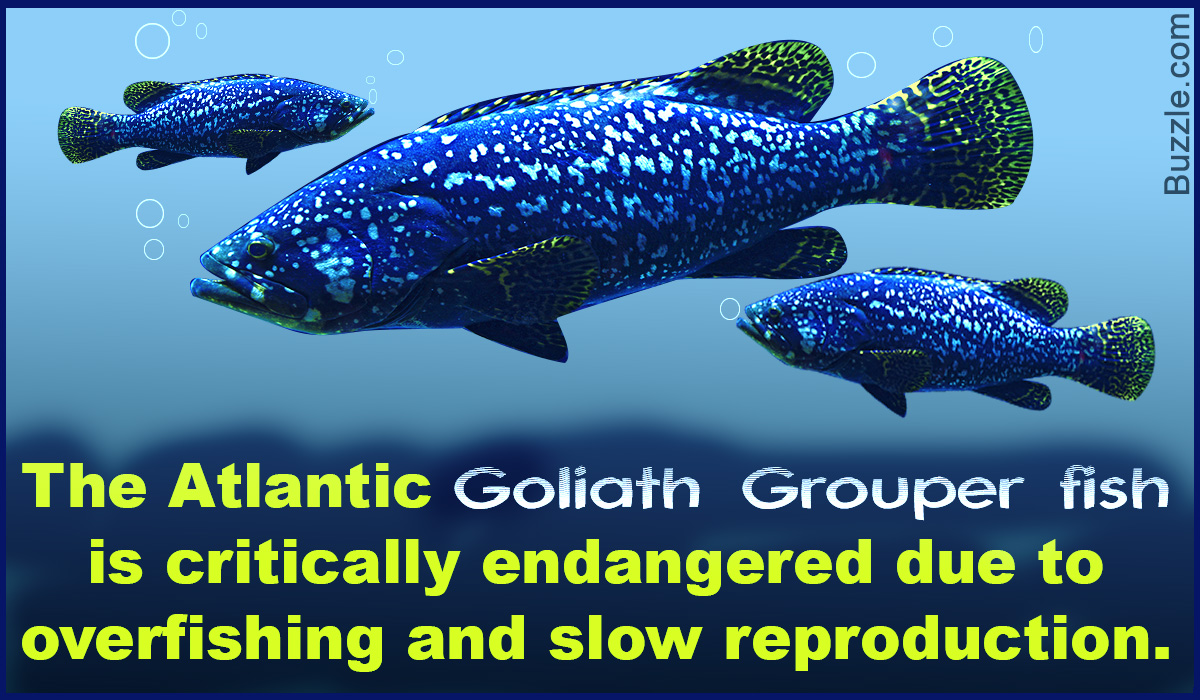 Goliath Groupers are found in the eastern as well as western Atlantic ocean. In the western half, they exist in the waters of the Florida Keys, Bahamas, and the coast of Brazil. In the eastern half, they range from Congo to Senegal. Here’s a table giving the scientific classification of the fish, followed by some intriguing facts about its physical characteristics, diet, and temperament.

Intriguing Facts About the Goliath Grouper

►Goliath Groupers can grow as big as 8.2 feet in length, and half as wide. Their weight ranges from 180 to a maximum of 360 kilos.

►Coming to their shape, they are stocky, have broad heads and tiny eyes. The pectoral and tail fins are rounded, whereas the dorsal fins are connected along the back.

►These fish could either be dull green or gray, or dark yellow to brown. They have multiple dark spots on their head, body, and fins. Juveniles are mostly tawny, and have dark bands and blotches.

►In spite of their huge size, these fish feed on crustaceans, small bait fish, and slow-moving poisonous fish like Catfish, Puffer fish, Stingrays, Cow fish, Burr fish, etc. Also, despite its sharp teeth, it swallows the prey whole (and does not chew upon it).

►Goliath Groupers breed from July through September; they gather in groups of 100 or more at specific breeding sites for spawning. The fertilized eggs scatter in the water and eventually develop into kite-shaped larvae with long dorsal fins and pelvic fin spines. Juveniles are just 2.5 cm long and prefer settling into mangrove habitats.

►The Goliath Grouper is specifically prone to over-fishing due to its large size, slow growth rate, curious and fearless nature, and low reproductive rate. These fish were considered a delicacy prior to receiving a critically endangered status.

►Scientists believe that Goliath Groupers have a very long lifespan, and they may live for even a hundred years. However, the highest known age is 37 years.

►Goliath Groupers are also referred to as the ‘barking fish’. This is because, these fish make a peculiar booming sound (something like that of a bass drum) which can not only be heard but felt as well. These vocalizations are normally termed as barks; they are either used to communicate or to warn intruders trying to access their territories.

►These fish are solitary and territorial in nature. Also, they don’t move a lot and are always glued to reefs, corals, and rocks in shallow waters, except during the spawning season.

►It is believed that like most groupers, Goliaths are protogynous hermaphrodites. This refers to organisms who are born female and undergo a sexual transformation at some point later in their lives.

►The Goliath Grouper was traditionally referred to as jewfish (as mentioned before), but the American Fisheries Society banned the use of this term (in 2001) as it sounded culturally insensitive.