A List of African Antelope Species With Awesome Facts and Photos

You are here: Home / Uncategorized / A List of African Antelope Species With Awesome Facts and Photos 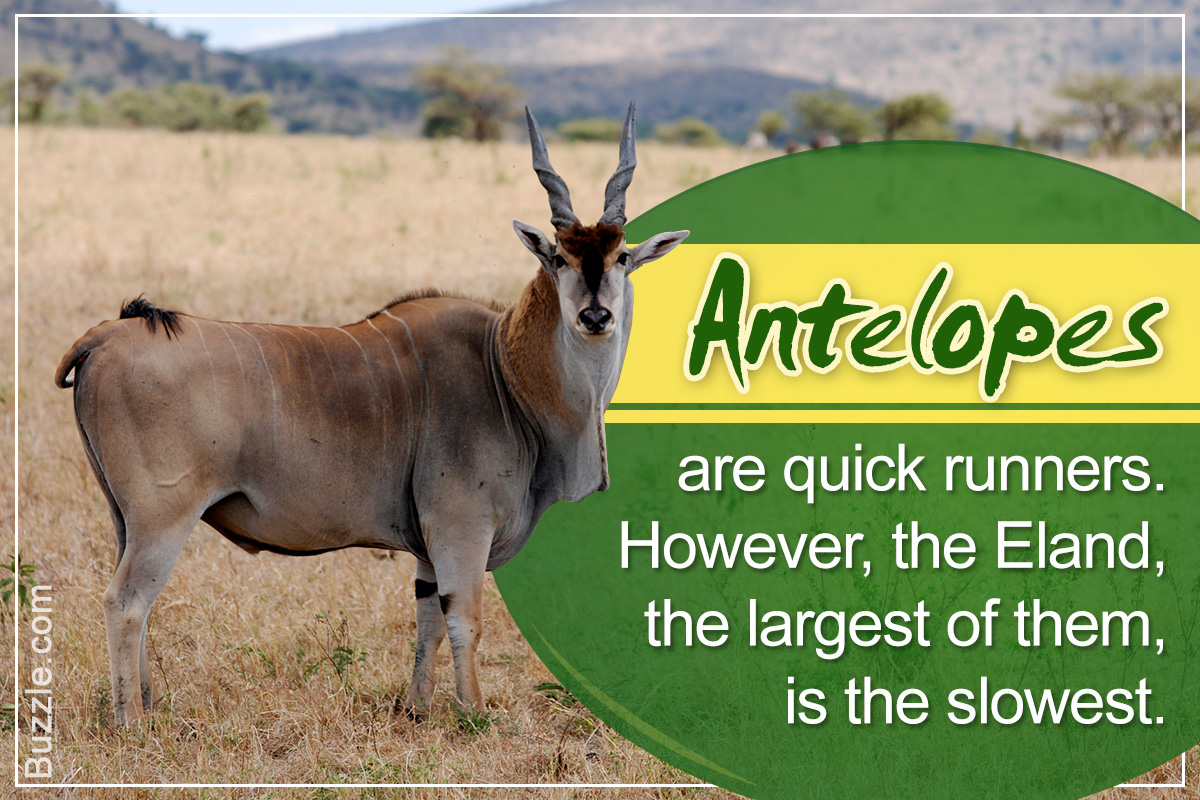 The most number of antelope species inhabit the African continent. Speaking of the major species, they include Wildebeest, Roan, Waterbuck, Eland, Gerenuk, Steenbok, Nyala, Klipspringer, Kudu, Lechwe, Springbok, Sable Antelope, Tsessebe, Impala, and Oryx. Below is a description that will provide you with a brief outlook on each of these species of African antelope.

Species of Antelope Found in the African Continent

The black one limits its habitat choices to open grasslands, and migrates over short distances, while the blue one does not mind exploring a variety of habitats, and migrating over distant places.

During migrations, a large number of these antelopes die while crossing the Mara river. Many of them are preyed upon by alligators and some die drowning in the waters.

With population spread over the regions of West, Central, Eastern and Southern Africa the roan (Hippotragus equinus) also comes under the larger species of antelopes in Africa; the fourth largest.

Roan is called so because of its reddish brown coat.

Easily confused with the sable, this animal’s characteristic features include its cloven hooves, beard like that of a goat, shorter horns, long tasseled ears, and prominent red nostrils.

Many say that the species is a cross between a goat and a horse. The male and female weighs averagely at 270 kg. The male stands tall at 140 cm, and female, 130 cm.

A white bib under the throat, and rump marked by a white ring, are the characteristic features of this African antelope, found mainly in Western Africa, Central Africa, East Africa and Southern Africa.

A waterbuck (Kobus ellipsiprymnus), contrary to its name, does not spend much time in water. However, in order to escape predators, it might use the water as a refuge.

The reddish brown coat of the animal may be an indicator of its age, as it gets darker with age.

Talking about a large African antelope, the eland is apt for the discussion. Currently, it is known as the largest of all antelope species dwelling in Africa.

The eland resides mainly in the central, east and southern parts of Africa. Coastal plains, montane areas, and semi-desert regions constitute the habitat of this animal.

The Eastern region of Africa comprises the habitat of this particular long-necked species of antelope known as gerenuk (Litocranius walleri).

One amazing fact about this animal is its extremely low water requirements. The animal does not need to drink water as the water that it derives from the plants it feeds on, is enough to keep it going. That is the reason, this species is mostly found in arid regions of Africa.

Another small species of antelopes in Africa is the steenbok (Raphicerus campestris). Found in the southern and eastern African region, it is also known by the names ‘Steinbuck’ or ‘Steinbok’.

It stands 45 – 60 cm tall at the shoulder, and has a diet that consists of low-level vegetation.

Like in the case of gerenuk, even this one can survive almost without drinking water. It uses the moisture from the food it eats to meet its daily fluid consumption.

The sexes of the nyala (Tragelaphus angasii) are differentiated from each other by their color. The male antelope is dark brown with vertical white stripes running on its body, while the female is reddish brown, marked with clear white vertical striping.

The water holes of South Africa usually remain crowded with these animals. Also, they prefer living in dense forest areas as they tend to be uncomfortable to dwell in open spaces.

The rocky hills of Africa happens to be the home to this antelope, which is also attributed by the name, ‘rock jumper’.

This animal is relatively smaller than its cousins, and generally reaches 58 cm at the shoulder.

The klipspringer (Oreotragus oreotragus) feeds on rock plants, and while standing it uses the tips of its hooves.

It is well-known for its remarkable jumping skills. It can leap to a height of 25 feet, which is about 15 times its own height. No wonder it is known as the rock jumper.

Lesser kudus populate regions of East Africa. In this type, males can weigh up to 90 kg, and females, 70 kg. Usually, these animals have a shoulder height of 90 – 110 cm.

The greater kudus are characterized by their massively prominent horns which are borne by the males. Their population prevails in the regions of eastern and southern Africa. 190 – 270 kg is the average weight of males, and 120 – 210 kg is for females.

Floodplains and marshy areas are the main habitats of this golden brown animal known as the lechwe (Kobus leche).

It feeds mainly on aquatic plants and is diurnal by nature.

The average statistics of a lechwe is 90 – 100 cm in shoulder height and 70 – 120 kg in weight. The animal makes use of knee-deep water holes to hide from predators.

One interesting fact about the animal is related to its knees. They are covered in certain type of substance that helps in repelling water. In this way, the animal can run faster even when in water.

This species of antelope is mostly found in South Africa, and it is the national animal of the country.

It is popular for its repeated feats of high leaps up to 13 feet into the air.

80 – 90 kph is the top speed that a springbok (Antidorcas marsupialis) can achieve as its running speed.

The wooden Savannah in East Africa, Southern Kenya and Southern Africa are inhabited by the sable antelope (Hippotragus niger).

The male is distinctively dark, while the female is chestnut to dark brown.

A sable antelope is known to confront the attacks of predators like lions, using its scimitar-shaped horns.

A tsessebe (Damaliscus lunatus) has a black stripe running from its forehead to the tip of the nose. Its chest and legs are black, and its coat is rusty red.

The horns of the animal are indicative of its age. This is because, as the animal ages, its horns tend to wear down.

Sleek, elegant, and graceful are the words which come to mind while describing a magnificent creature such as the impala (Aepyceros melampus).

This antelope is mainly known for its amazing leaping abilities.

This slender creature can be commonly found in places ranging from southern Africa to the northern limits of East Africa.

The oryx (Oryx gazelle) is also one of the large antelope species in Africa.

It mainly dwells in near-desert conditions, without water for long periods.

Both the sexes of this species possess horns which are used for protecting themselves and their young ones.

This article served as a medium to give you a glimpse of a small part of the lives of antelopes that inhabit the great African continent. It is truly amazing to know that the earth serves as a shelter to a wide variety of fauna, who in their respective domain do their bit in maintaining the balance of the ecosystem. In case you come across some more information on this subject, do visit again, and give your inputs via the comment box. Totsiens! 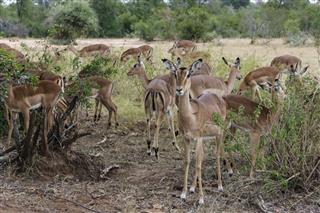 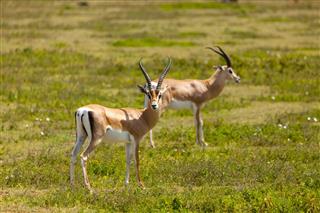 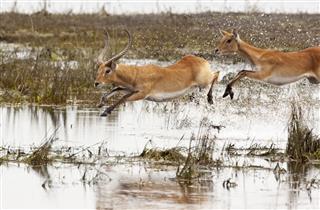 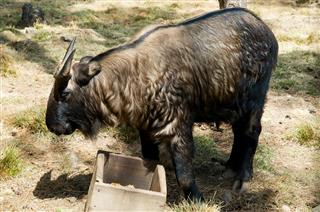 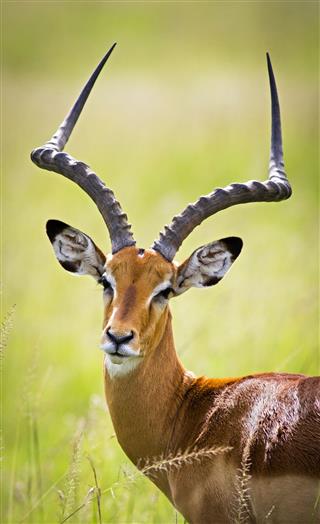 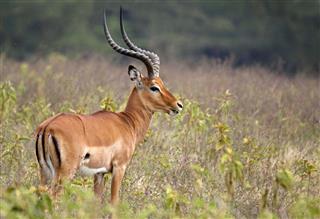