We always wonder what was Mother Nature thinking when she decided to make certain animals look weird, and sometimes even creepy, especially their noses. In this AnimalSake article, we list some animals on Earth with really funny and strange noses.

You are here: Home / Uncategorized / 14 Animals With Really Strange Noses You Won’t Believe are Real 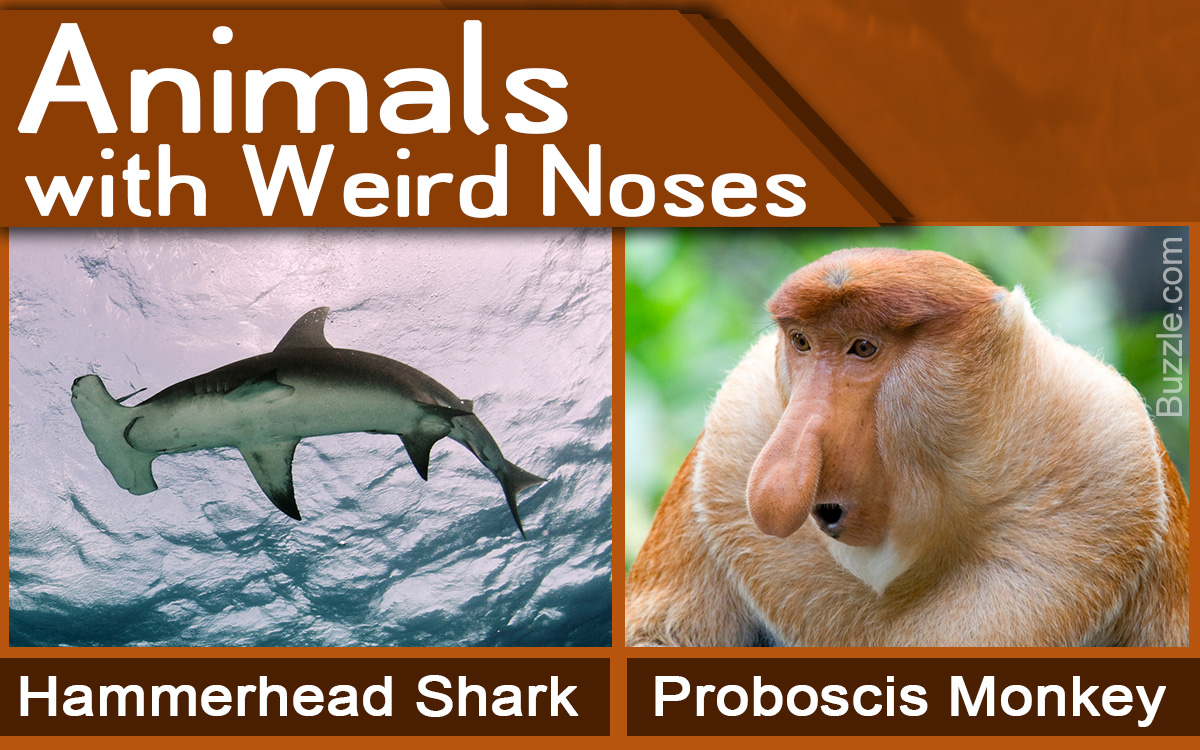 We always wonder what was Mother Nature thinking when she decided to make certain animals look weird, and sometimes even creepy, especially their noses. In this AnimalSake article, we list some animals on Earth with really funny and strange noses.

To compensate for poor eyesight and hearing ability, some animals like the star-nosed mole, water shrew, and rhinoceros have a sense of smell that is highly developed, which also helps them to hunt for food.

Mother Nature surely knows how to surprise us with her strange creations on Earth, with us humans being one of them! When we talk of strange and weird creatures, the animal kingdom definitely tops the list, and it simply gets weirder by the day. There exist some animals with really weird and strange noses, that we bet you didn’t know about at all; speaking of which, aquatic animals are not far behind. These range from being as tiny as a frog, to as large as an elephant. Looking at their noses will leave you wondering as to why they were made that way. These creatures use their noses to hunt for prey, attract the opposite sex, eat, drink (Yes, drinking!), or even to fight for their territories. And you thought breathing was all that a nose is used for! Some of them may be creepy-looking, but are interesting nonetheless. Well, we leave this for you to decide. Without much delay, we bring you a list of some animals with really offbeat and freakish noses.

This hamster-looking creature surely tops this list. This little animal is a usual sight in eastern Canada and northeastern United States. Its nose is made up of 22 tentacles, forming a star shape, and is also one of the fastest foragers. It almost looks like an animal with no face. It uses its nose to search for worms and insects even at night. You’ve left us completely dumbstruck and open-mouthed Mother Nature!

Now this is someone with a big nose in the monkey family, and we mean it. The nose of a Proboscis monkey nearly reaches up to seven inches, which at times hangs down over its mouth and has to be pushed aside to eat food. It is also used to attract the females for mating. Didn’t we say it is used for other purposes too? This species is listed as an endangered species on the IUCN Red List.

The Pinocchio frog is a tree frog found in the mountains of Indonesia. It is named so because of its Pinocchio-like nose. It can inflate and enlarge its nose when it is calling out. The tip of its nose points up when it is vocal, and down when it is silent.

This beautiful golden monkey is weird in a cute way. It is allergic to rainfall, and sneezes A LOT when it rains, making it easy for hunters to hunt them down during wet days. The upturned nose that faces forward gets filled with water, resulting in a plethora of sneezes. It is also listed as one of the endangered species. We don’t know yet if its nose is of much use, other than breathing.

No, this is not any makeup-ed monkey, but one with natural coloration, having a bright-red nose with white- or blue-colored stripes around it. The females are a little dull in color as compared to the males.

Although a common sight, pigs use their noses to find food like insects, worms, and rotten food waste. They have a tremendous sense of smell. This is possible due to the large round disk of cartilage at the tip of the snout.

Translated as the ‘Earth pig’, this nocturnal animal is a relative of the elephant, and not the pig. It uses its long, pig-like snout to sniff out food, by swinging it side to side to pick up the scent of termites and ants.

This unusual shark has a protruded nose that runs horizontally along its mouth. It includes the shark’s nostrils, that are set further apart. It does much more than just smelling. This weird nose enables the shark to hold down prey before eating, and helps it sense prey with better accuracy than other shark counterparts. This is because the distance between the nostrils helps it judge the direction of a smell.

Ahem! Have you ever tried drinking through your nose? No, right? We simply can’t. But this huge mammal that we are talking about here definitely can. When you think of weird noses, how can our loving elephants be ignored. Yes, we are talking about their long, long trunks, that do much more than sniffing. They can breathe, touch, taste, drink, pick up branches and other things, etc. The trunk functions as a nose, lip, and an additional hand too!

Elephant seals, with their big noses, can be found everywhere around the oceans. However, only the adult males have big noses, which allows them to make thundering screams. It also helps them store water to prevent loss of body fluids during the mating season, when they leave the beaches in search of food and water. Ever thought water could be stored in a nose? We told you, it just gets weirder!

Another adorable animal, the elephant shrew is neither an elephant nor a shrew, but is related to both. It usually hunts for food on the ground with its long, active, and squirmy nose, which mainly includes beetles and spiders.

Also called the carpenter shark, the sawfish has a long, narrow, and flattened nose extension, that resembles a saw. It is covered with electrosensitive pores, that helps detect movement of prey nearby, and lets it rummage through sandy or muddy water to catch hold of them.

Probably one of the most unique-looking fish on Earth, the unicorn fish has a long and pointed nose like a horn, protruding forward of its eyes. It is used to protect themselves from predators.

The prehensile snout of the tapir is a soft, long, and highly flexible part of its body, that can be bent and moved in all directions in search of food. It can also grab leaves and branches from low-level trees and bushes.

So, this was our list of the animals with unusual noses. Whether you agree or not, God was in a really creative mood when He made them. Which one do you think was the weirdest? Please feel free to drop in a line or two in the comments section below.