One of the most spectacular phenomena of nature is the migration of Christmas Island red crabs in Australia every year.

You are here: Home / Uncategorized / Amazing Facts About Red Crab Migration That Will Make You Go Wow 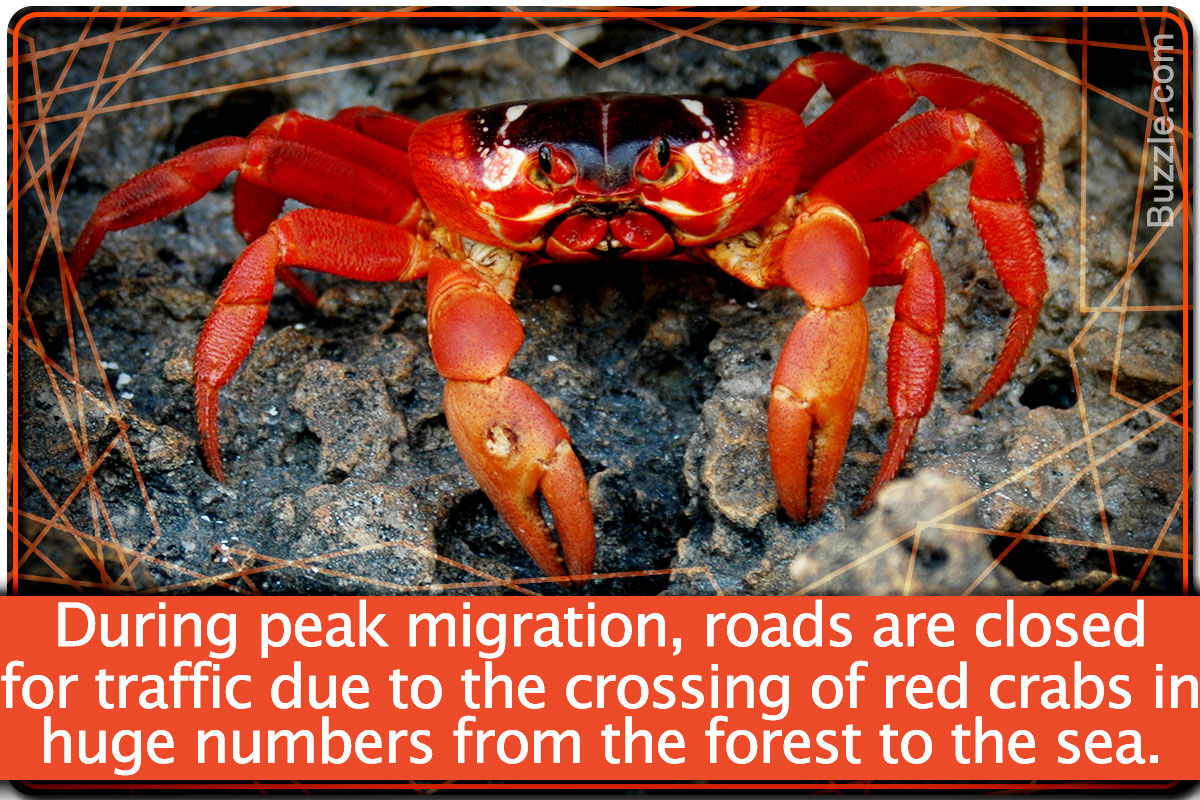 One of the most spectacular phenomena of nature is the migration of Christmas Island red crabs in Australia every year.

Red crabs are the only species of crabs where both, males and females migrate to breed, whereas in other species, only the females make the long march in order to deposit their fertilized eggs into the sea.

Imagine you are driving or walking down the road, and suddenly you see a sea of red crabs crossing it. Weird and amazing, isn’t it? Some of you may discard it as a weird dream of getting caught up among a swarm of crabs walking towards you. Well, this isn’t any strange dream! This spectacular sight can be seen in actual in Christmas Island in Australia.

The Christmas Island red crab, also called Gecarcoidea natalis, is a species of land crab native to Christmas Island in the Indian Ocean. It is located 1,625 miles (2,600 km) northwest of Perth, which is home to many animal and plant species. It is well-known for the mass migration of about 50 – 120 million red crabs each year during October or November. All you will see is the mass of these countless number of crabs seething the roads and cliffs, emerging from the forest and heading to the sea. Here are some more interesting facts about this unusual phenomenon of nature. 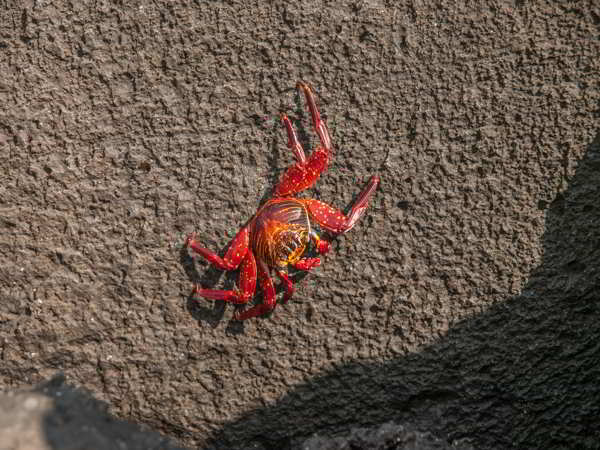 These are large crabs, with their carapace measuring up to 4.6 inches wide. The males are usually larger than the females. However, the females have a broader abdomen and smaller claws in comparison. They are bright-red to orange in color. They remain active during the day, but can even die because of dehydration. They usually feed on fresh and dried fallen leaves, fruits, flowers, and seedlings. During the dry weather, they retreat into their shelters to retain moisture and salts in the body.

Why Do Red Crabs Migrate?

At the onset of the wet season during October-November, most of the adult red crabs that inhabit Christmas Island suddenly start their mass migration from the forest to the sea to breed. The rains provide enough moist conditions for them to complete their long and difficult journey of about 5 miles, which usually takes 5 – 7 days.

It All Depends on the Moon

The timing of the migration is linked to the phases of the moon and the lunar schedule. The crabs mate at such a time that the females can produce and develop the eggs in burrows for about 10 – 12 days, before releasing them into the sea when high tide is between the last quarter and the new moon. During this time, the sea level varies least for a longer period of time, making it easier and safer for the females to approach the edges for releasing their eggs. If the migration gets delayed due to unfavorable weather conditions, spawning will be put off until the next lunar month. 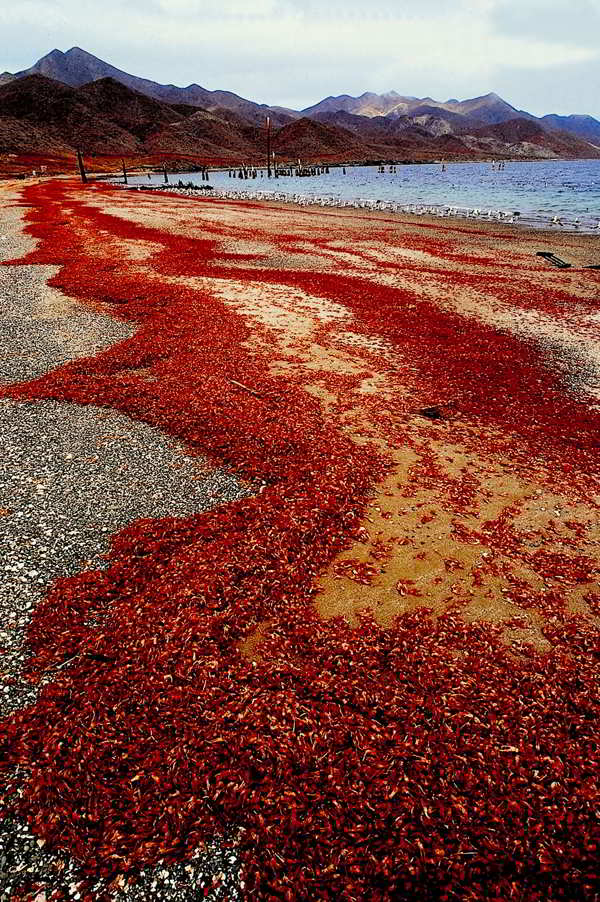 Male crabs lead the first wave of migration from the forests. It takes them about 5 – 7 days to reach the sea, but they soon get outnumbered by the females. The males reach the shores and take a dip in the sea to replenish lost moisture and salts. Then they dig burrows for mating to occur after the female crabs arrive. The males leave the shores to begin their journey back to the inland.

The females stay behind in the burrows for about 2 – 3 weeks more to lay their eggs. The eggs are held in a brood pouch between the extended abdomen and thorax of a female crab. A single female crab can lay up to 100,000 eggs. In the mornings and late afternoons, between the last quarter and the new moon, they descend from the burrows to the shore to release their eggs. The eggs are released around the turn of the high tide. After the brood is empty, they begin their return journey to the forest.

The eggs hatch immediately into larvae in the sea, and remain there for about a month to become tiny crabs. Most of them get washed away due to high currents. Millions of baby crabs emerge from the sea and begin their inland journey, which takes them about 10 days. They disappear under fallen tree branches, rocky outcrops, or other debris on the ground for the first three years of their life.

Migration is a risky time for red crabs. They travel over roads and off-road areas to reach their destination. These roads are often used by humans for commuting. Thus, injury and dehydration, both have become a major threat for them. They frequently get crushed by vehicles passing on the roads, and even cause accidents due to their hard and tough exoskeletons, which often leads to the puncture of tires. To ensure the safety of both, conservation measures have been taken up by officials.

We can say that on this island, crabs have the right of way! ‘Crab crossings’ and ‘crab bridges’ have been constructed for them to pass through. At those points where there is huge concentration of red crabs, tunnels have been built under the roads to channelize their movement. In other areas, the roads are temporarily closed with signs and barriers erected indicating the same for their protection. People living there have become more tolerant and respectful during the annual migration. They have also become more cautious while driving, which is helpful in conserving this unusual species, and also minimizing the casualties caused due to accidents.

This similar phenomenon can be seen in Cuba as well, usually in the Bay of Pigs, where small reddish-orange female crabs migrate to the Caribbean Sea to release their eggs. Now that you know these wonderful facts about red crab migration, and understand what an amazing occurrence it is, wouldn’t it be a wonderful and interesting experience to watch these little red creatures swarming the roads in huge numbers?