Banana spiders are quite fascinating creatures, especially known for spinning impressive webs. This AnimalSake article lists some interesting facts about these arachnids.

Banana spiders are quite fascinating creatures, especially known for spinning impressive webs. This AnimalSake article lists some interesting facts about these arachnids. 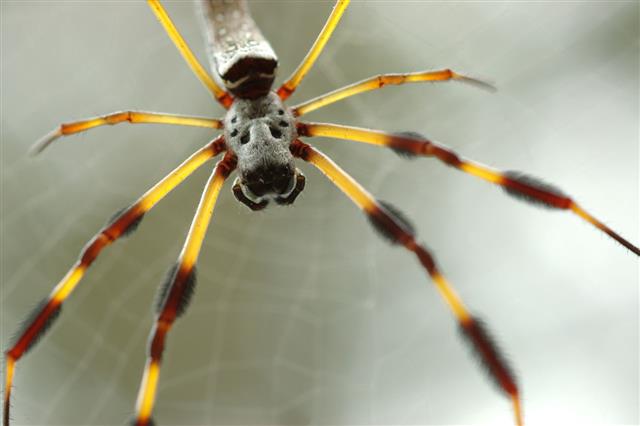 An interesting fact about banana spiders is that all of them have been observed to have a great fear of cockroaches.

The word Nephila is derived from Ancient Greek, which means ‘love to spin’. Nen means to “spin”, and philos means “love”. 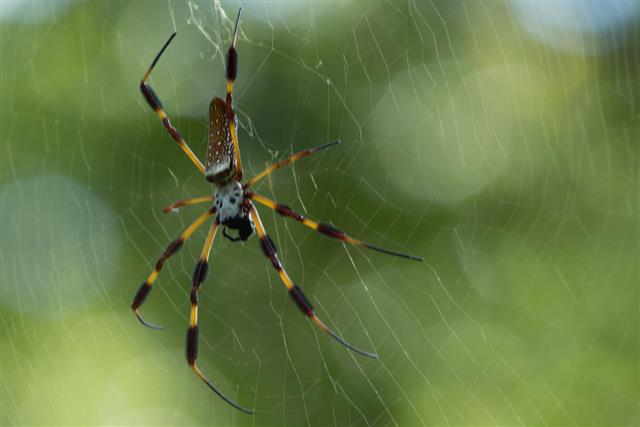 The body color of these spiders can range from yellowish-green to reddish-brown. Their legs are striped and long. They have white patches on their abdomen. Females are bigger than the males, and their body size (not leg span) is about 1.5 to 2 inches long. Males are not more than an inch long. The leg span of these spiders can be as big as 5 inches. Both the genders have black tufts of hair on the first and last pairs of legs. The female is not only larger than the male, but is also more colorful. This colorful appearance helps them scare away predators. From time to time, these spiders molt and shed their skin.

In the US, these spiders are usually found in the coastal southeast and inland regions, from North Carolina to Texas, and even in Florida. They are also found in Asia, Africa, and Australia. They are most commonly found in areas that have warm climates. They prefer coastal and swampy areas, open habitats, and forest edges. They also seem to like fences and building overhangs.

The male courts the female by staying on her web and performing mating rituals. One of the rituals involves the male gently stroking the female’s leg. There can be more than one male on the web. However, if the female becomes unhappy, she can kill the male and eat him.

A female banana spider has 2 insemination ducts, each ending in a sperm storage organ. The male has 3 penises. All of them break off during sex. Mating usually occurs when a female has freshly molted. In this case, a dominant male stays around the female before she molts. He mates with her after she molts. Once the eggs are laid, the female dies within a month. Hence, the spiderlings have to fend for themselves when they are born.

Banana spiders eat small insects like flies, butterflies, mosquitoes, locusts, grasshoppers, etc. Some species are even known to eat small birds and snakes. Their diet changes according to the food that is easily available. However, they are also known to alter their diet according to the time of the year.

Banana spiders are known for the impressive webs that they weave. The yellow threads of their webs shine like gold in the sun. This helps them to ensnare their prey. Young spiders do not begin to weave the golden web right away.

These webs are quite complex. There is an orb in the center, suspended in a maze of non-sticky barrier webs. The orb is renewed regularly as the stickiness decreases. The portion of the web that is removed to be renewed is often consumed by these spiders.

The venom of banana spiders is mildly poisonous, and they do not produce it in very large quantities. Hence, their bites are not lethal to humans. Actually, a bite causes blistering and some amount of intense pain, and maybe some nausea and dizziness. It does not really require medical attention unless a person experiences breathing difficulty or muscle spasms. The latter two symptoms may be signs of an infection setting in, which does require a visit to the doctor. Otherwise, the pain usually subsides in a day.

Two bed hangings made of this silk were exhibited at the Exposition Universelle of 1900, held in Paris.

At the American Museum of Natural History in 2009, a shawl made by using 1.2 million golden orb-weavers was exhibited, which was made by the combined efforts of Simon Peers (textile designer) and Nicholas Godley (entrepreneur).

The second time around, the same duo managed to produce a golden cape, a bigger garment this time, which was showcased at the Victoria and Albert Museum in London in 2012.

Banana spiders are useful to the environment because they help keep pest populations (like fruit flies) under control by feeding on them. Thus, instead of killing them, simply take down their webs with a stick or broom, and they will find another place to weave them. 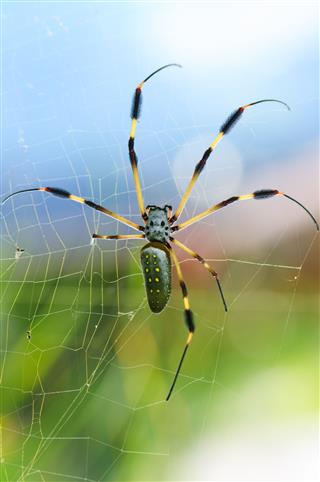 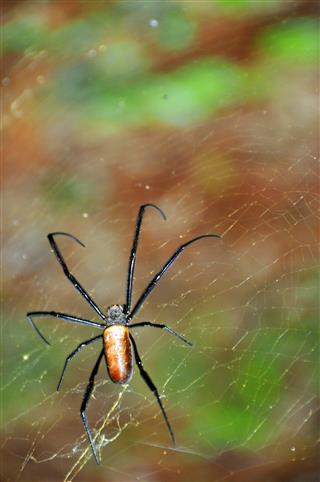