The black widow spider, which is considered the most venomous spider in North America, is a unique and interesting creature.

The black widow spider, which is considered the most venomous spider in North America, is a unique and interesting creature. 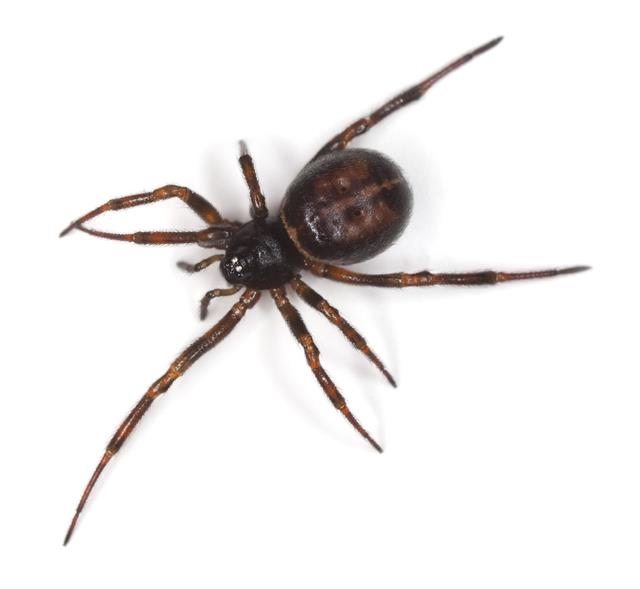 Widow spiders belong to the Latrodectus genus. While there are 31 species of widow spiders which occur all over the world, one of the best known ones – some would say the most infamous one – are the black widow spiders found in North America. Widow spiders are particularly notorious for their neurotoxic venom, which is very potent. The fortunate thing is that it can inject only a small amount each time it bites.

There are three types of black widows that occur in North America.

Latrodectus mactans – Also known as the southern black widow, this black widow spider species can be found in the southeastern regions of the United States, ranging from New York down to Florida, and west across Oklahoma and Texas. The L. mactans is usually regarded as the original black widow.

Latrodectus variiolus – Also called the northern black widow, this species occurs in the northeastern region of the country, and in the southeastern areas of Canada.

It is quite usual for these species to overlap each other’s territories. All the three species have many common characteristics and are considered to be the most venomous species of spiders that inhabit North America. The venom of the black widow spider is said to be 15 times more potent than the venom of the rattlesnake.

The most distinctive identification marks of the black widow spider are the two triangular marks on the underbelly, in the shape of an hourglass, because of which it is also called the ‘Hourglass Spider’. This marking is usually red in color, although it can also be orange or yellow.

The male black widow is half the size of the female, having a smaller body, with longer legs. It has white lines along its sides and red spots on its upper midline. The fangs of the female black widow are very small, and can just penetrate the skin to enable the transfer of venom. The male’s fangs are much smaller and are less venomous, and are not considered to be dangerous to humans.

Black widows have a preference for areas that are undisturbed. They make their webs in piles of wood or rubble, inside the burrows of rodents or hollow stumps, or under stones. Indoors, they like cluttered areas in crawl places and basements. These spiders can also be found in littered areas, large city dumps, in storage sheds, and garages. On making their web, the black widow usually stays put at the same spot. The web that the black widow makes is very strong with crisscross patterns.

During the day time, the black widow withdraws into an isolated area of its web, which is covered with thick webbing. In the night, it hangs motionless from the center of its web, with its belly up, waiting for its prey. The black widow feeds on a variety of insects such as beetles, roaches, wood lice, crickets, millipedes, centipedes, and other spiders. When any prey gets entangled in its web, the black widow swiftly comes out of its hiding place, envelopes the prey with its web, and jabs the prey with its fangs to inject venom. When the prey ceases to move, the spider uses its cheliceral teeth to mash up the wound it makes on the prey, infuses it with digestive enzymes, then carries it back to its hiding place before feeding on it. The feeding process is very interesting because the black spider sucks up the prey and the whole process of digestion happens outside its body.

Black widow spider reproduction is as unique as is the species. The male black widow makes a ‘sperm web’ on which it deposits a small amount of semen. It then coats its palps with sperm, and sets out to look for a female of its species. On finding the female black widow of its species, it begins its courtship, which it does by vibrating the female’s web, so that she recognizes him as a mate and to get her receptive to mating.

Mating comes about by the male inserting its papal organs into the female’s spermathecal openings, and the spermatozoa being released on the eggs. The egg sac of the female black widow spider is globular in shape, about 1/3-1/2-inch in diameter. The female lays the eggs into a small web, which it then covers with more webbing, until it forms a cocoon, which is then camouflaged and guarded, or is carried on the back of the female. The eggs hatch within the cocoon and the spiderlings emerge.

The popular notion of the female black widow spider eating the male after the mating takes place is not always true. Although this behavior has been observed in some species, the males may manage to escape, especially if the female has been well fed or if the male does not remain in the vicinity after mating.

All species, except for two small varieties, have venom glands, which are used to kill the prey. The amount of venom most spiders produce is not virulent enough to be harmful for humans. Plus, being timid creatures, they usually bite and inject venom in humans as a method of self-defense. Generally, when a human approaches, they try to run away as fast as possible, but if they feel cornered or in order to protect their young, they can inflict a bite.

It is indeed undesirable to find a black widow spider in your house. They usually can be spotted in those parts of the house that may not be regularly visited and/or cleaned, such as the basement, or the attic. The trait about black widow spiders that makes them especially infamous so far as human interaction with the spider is concerned, is the fact that they bite humans, and that their venom is exceptionally potent.

The black widow’s venom, as mentioned above, is neurotoxic, which means it affects the nerves or nerve cells. The neurotransmitter that is released when a black widow bites is acetylcholine, which affects muscular contraction. Hence, there is prolonged, uncontrollable, and severe muscular contraction in the area where the spider bites.

How to Control Black Widow Spiders

In order to keep your house spider-free, make your surroundings less spider-friendly! Make sure you clean your house thoroughly at least twice a week. Let there not be any area in your house that does not receive direct sunlight in at least some part of the day. Keep your house well aerated and fresh. Since black widow spiders are nocturnal creatures, night inspection will be necessary to locate them. Some of the other measures are, installing screens in the house, preventing clutter from accumulating in the house, vacuuming frequently, and using insecticides prudently. When working outdoors, it is advisable to wear long-sleeved shirts and gloves, and to shake out clothes and shoes before wearing them on.

How to Avoid and/or Tend to Black Widow Spider Bites

The above pointers are general precautions you can take. However, they do not make your house 100% spider-proof. Hence, it might happen that in spite of taking all the care you can, you still find a black widow spider in your house. If bitten by a black widow spider, it is advisable to apply an ice pack, collecting the spider to identify it, if possible, and seeking medical attention immediately. If prompt medical attention is sought, most people recover with proper treatment. Only 1% of people actually die from being bitten by the black widow spider.

Like all species of animals, the black widow spider too has its rightful place in the wondrous web of life that exists on our planet. Hence, as a unique species, they deserve respect from us. They can be easily identified and removed safely, chiefly by preventing clutter and by keeping the house clean.