Interesting Facts About the Beautiful Blowfish

Also known as puffer fish, blowfish can inflate themselves to scare away their predators, hence the name. They are believed to be the second most poisonous vertebrates in the world.

You are here: Home / Uncategorized / Interesting Facts About the Beautiful Blowfish

Also known as puffer fish, blowfish can inflate themselves to scare away their predators, hence the name. They are believed to be the second most poisonous vertebrates in the world. 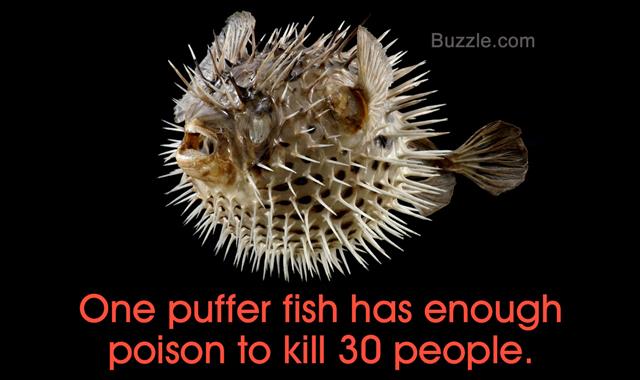 Blowfish is one of the common names of those marine and estuarine fish that belong to the familyTetraodontidae. This family consists of 19 genera, which in turn have around 120 species of fish. These fish are known in various names like, puffer fish, balloon fish, bubble fish, globe fish, swell fish, toad fish, toadies, and honey toads. All these names indicate their unique defense mechanism – inflating themselves like a ball, to scare away their predators. Another alarming fact about blowfish is that they are highly poisonous. Go through this AnimalSake article for a brief overview about these fish.

Though blowfish is known for its inflated look, this feature is not permanent and can be seen only when it is threatened. This fish is often compared to a large tadpole, as far as its appearance is concerned. It has bulging eyes that can be moved independently. The tube-like body has an elongated snout and small fins. The leathery skin with small spines (found in some species) is elastic in nature. The fish has unique beak-like jaws that are believed to be their fused teeth. This beak-like structure is used to crush the shells of mollusks and other such prey. The size of the blowfish may vary with different species. While the dwarf puffer fish (the smallest) has a body length of around 2.5 centimeters, the larger species can be around 60 centimeters long. There are individuals that are around a meter in length. Usually, these fish are found in shades of gray, brown, yellow, blue, and white.

Blowfish are mainly found in the warm, coastal waters of the Pacific, Indian, and Atlantic Oceans. They are mostly found in between the coral reefs and rocks. While some species are found in estuaries, some others spend their life entirely in fresh water. Blowfish feed on mollusks, coral, sponges, and echinoderms. They may also eat algae that grow on rocks and corals. It is believed that the toxin in the body of blowfish is synthesized by certain types of bacteria found in their diet.

Stomach Inflation: This is the most distinctive feature, from which blowfish derived their name. Though their first line of defense is to use the tail fin for a fast escape, if they are followed by the predator, the inflation technique is used. They ingest water (or air) in large amounts so as to inflate their stomach. This action of blowfish is facilitated by their extremely elastic stomachs, that get inflated in a matter of seconds.

The original and inflated forms of a blowfish

Scary Spines: Some species of blowfish have spines on their body. Usually not visible, the spines become prominent, only when the fish inflates itself. In short, most of the predators avoid such an unpalatable catch. The fish with its inflated body, can easily choke the predator to death. However, predators like, tiger sharks are found to feed on blowfish.

Deadly Poison: Blowfish are said to be the second most poisonous vertebrates in the world. Though some species are not poisonous, others have a deadly poison named tetrodotoxin, in their body. The concentration of the poison may not be the same in all body parts. It is said that the highest concentration is found in the ovaries and liver, while trace amounts are present in the intestines, skin, spines, and muscles. This toxin makes the fish foul-tasting as well as deadly for predators. The fish can release the toxins, as they die inside the predator’s stomach.

Warning Coloration: Blowfish with dark colors and distinct markings are found to be more poisonous. This feature is an example of warning coloration in animals. They can also change their body color, according to the changes in the environment.

The eggs of blowfish are spherical and float on the surface. The males may sometimes lead the females to the surface waters, where spawning happens. It takes around four to five days for the eggs to hatch. Though they are very small, blowfish fry resemble the adults in looks. Some species of freshwater blowfish display an interesting courting behavior. The males may court with other males to attract females. In some species, the males are found to make circular depressions on the seabed, so as to woo females. Later these spaces are used for laying eggs.

As mentioned above, some blowfish have a powerful neurotoxin in their body, and this can be lethal for both predators and humans. Studies show that these toxins are not produced by the fish itself, but by a particular type of bacteria, that enters the body of the fish through their diet. This is evidenced by the fact that non-poisonous blowfish or puffer fish can be raised in a controlled habitat with a diet, that is different from their normal diet.

As a Delicacy: In spite of the poisonous nature of the fish, it is consumed in Japan, China, Korea, etc. In fact, it is considered a delicacy and is used to prepare various recipes, like blowfish sushi. In Japan, the term ‘fugu’ is used to refer to blowfish and the dishes made out of them. The most common blowfish dishes are sashimi, chirinabe, Kara-age, puffer soup, etc. Being highly poisonous in nature, special license is mandatory for chefs to be allowed to prepare this fish. The toxic parts have to be removed carefully, so that the edible parts do not get contaminated. Fugu dishes are highly expensive too.

Poisoning: It has been observed that incorrectly prepared blowfish dishes can cause harm to those who consume them. However, studies show that around 40 types of these fish are used in Japan for human consumption, and every year they consume approximately 10,000 tons of blowfish. The severity of symptoms of blowfish poisoning may vary with species and the type of dish. While some species are less poisonous, others can be deadly. Certain types of dishes like sashimi and chiri are found to be mostly associated with such incidents. Incorrect preparation is often blamed for blowfish poisoning, which can cause severe symptoms like, coma and even death. The common symptoms include dizziness, intoxication, vomiting, numbness and prickling sensation, muscle paralysis, rapid heart rate, nerve damage, low blood pressure, etc. There is no antidote for the deadly poison in blowfish. While some species cause minor health problems, others can be really lethal.

One of the most amazing fish species with a unique defense mechanism, certain types of blowfish are now seen in aquariums too. It is always better to avoid consumption of blowfish. Otherwise, try those prepared by expert chefs. Though porcupine fish of the Diodontidae family are also known as blowfish, they have highly prominent, visible external spines. They too display the defense mechanism of inflating themselves.