Sea turtles are beautiful marine animals, which are caught worldwide for their flesh and for their shells. Most species fall into the category of endangered. 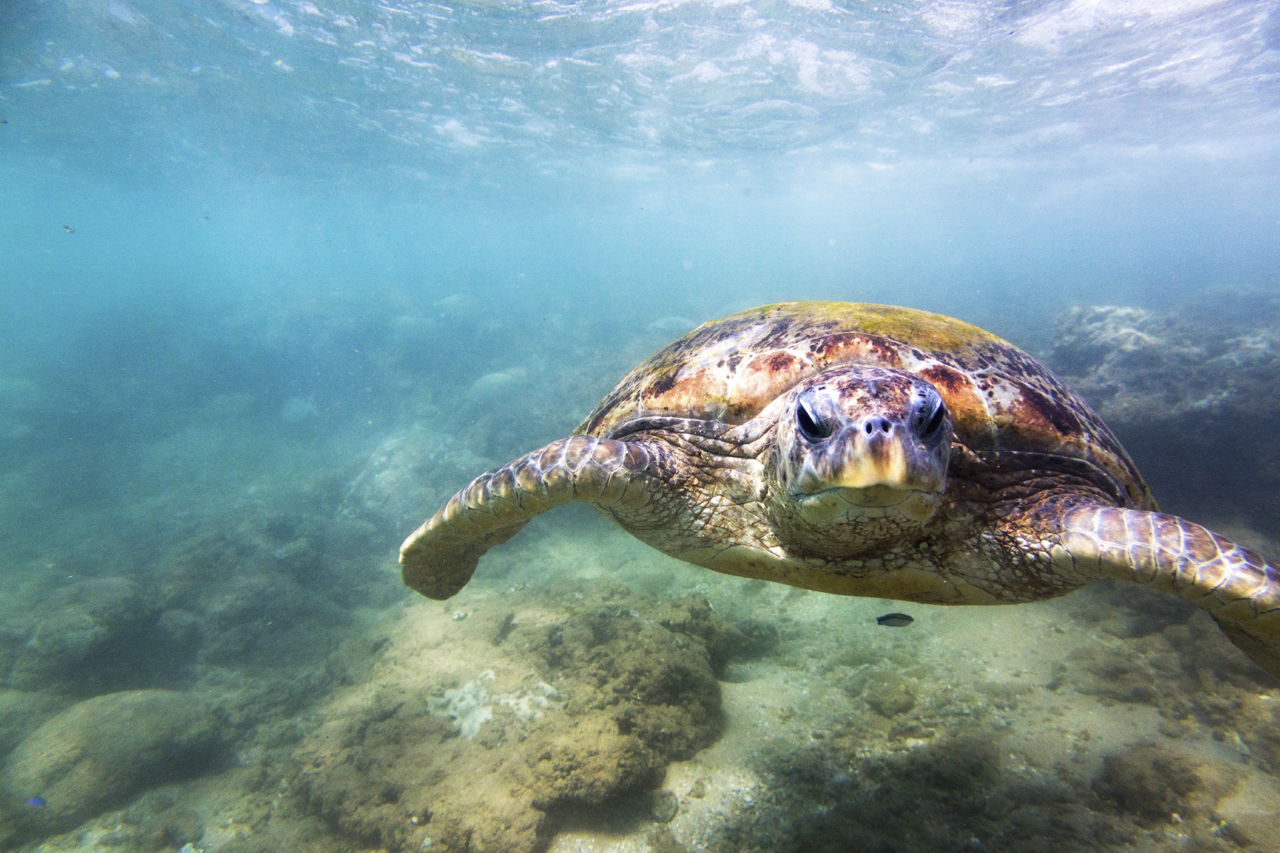 Sea turtles are beautiful marine animals, which are caught worldwide for their flesh and for their shells. Most species fall into the category of endangered.

Sea turtles are air-breathing reptiles that are adapted to the marine environment. They inhabit the tropical and sub tropical ocean waters around the world. They are commonly known as marine turtles and they are placed under the Cheloniidae / Dermochelyidae families. There are seven species of marine turtles, of which six are placed under the endangered species list. The following table will cover the names of the species that will help you understand their conservation status.

Why are Sea Turtles Endangered

There are plenty of reasons that have put these gigantic species in the midst of rough waters. With our inefficiency and tendency to overlook the fact that these poor creatures may face extinction, has led to their endangered status. The sea turtles have an in-built navigation device that helps them find their way around in waters. Let us see some of the lead to addition in the names of marine turtles like; green sea turtle ‘endangered’, leatherback turtle ‘endangered’, etc.

The sea turtles tend to live in water, but the females come over to lands for nesting. The females can nest more than once, and this is the time they are in the most vulnerable position. Their nesting areas have been taken over by human encroachments, settlements, and recreation development, like resorts, etc. This has forced this limbering beast to search for areas that are less suitable for nesting. Many times, these females tend to abort their eggs, as there is lack of nesting area. These turtles navigate using the reflected light from the moon between land and water. But, the artificial lights from neon signs confuse the poor creatures and disturb their nesting patterns.

Eggs, the first step for a sea turtle to have a chance at life. And this first step of life has become a delicacy in many countries. The sea turtles are at a loss on land due to their myopic vision and wobbly gait. They also do not possess any poisonous darts or claws to protect their eggs. The nasty poachers have an opportunity and steal their eggs. The cartilage or ‘callippe’ is cut out of the live turtle at the bottom of the shell. The poor baby is left on the beach to die a painful death. How cruel can one be?

The sea turtles are caught in shrimping vessels that use trawl nets that drown these poor creatures. They die, as the nets are not hauled in fast. Gill nets and dredging for oil also causes habitat destruction and injury to the animal.

One female sea turtle can lay hundreds of eggs in one nesting season. But only a few survive under ‘natural and favorable’ conditions. These eggs are preyed on by crabs, foxes, birds, and humans (of course!), as they make their run towards the sea. By the time they reach the shallow water, half of them have been gobbled up by their predators on land and few are eaten up by fish in water. Only a few lucky ones win the battle of survival and live past their 1st birthday!

It has been found that sea turtles suffer from a disease known as Fibropapilloma Tumors. These are huge lope shaped tumors that grow on the soft body parts of the sea turtle. They can grow as big as a cauliflower, causing a lot of trouble and eventually death to the creature. If the tumor size or number of tumors does not kill the animal, then it is starvation that leads it to its death. This starvation is due to tumors growing on its eyes. The turtle is unable to find its food due to blindness and thus it led to its death. Initially, it was seen to affect only green sea turtles and called green turtle disease. Today, it has started to affect other species too.

The sea turtles take more than a decade to complete their juvenile stage and reach maturity. Only then they start breeding and adult turtles have to live for many years to maintain the dodgy balance of population. But, as mentioned above, the adults face a lot of hardships for surviving. Pollution, long lines of fishing fleets, high seas, even tumors, etc., all cause untimely death of these massive, beautiful species.

Sea turtles can be called biological nutrient transporters, as they feed on the coastal and pelagic ecosystems. They come on the beaches for nesting and the energy in the egg shells comes from the marine environment. Thus, the empty egg shells are left on the beach get decomposed and transfer the sea energy into the land. This helps in keeping the land and sea ecosystems connected.

Also, the turtles are an important ecotourism attractions. Hundreds of tourists pay thousands of dollars to catch a glimpse of these beautiful sea turtles. They help in providing jobs and income to sea-side communities. They also attract many other sea species that help in increasing the marine attraction. Thus, sea turtles play a major economic booster for many countries.

Sea turtles as well as other endangered animals are an important part of our planet. If one precious species is lost, it will lead to the death of many other species that co-exit in nature. As the smartest animal on earth, we have to wake up from our slumber before we lose the treasures of Mother Earth. Please refrain from buying turtle shell items, like jewelry, meat, and shell decorations. Also, avoid eating turtle meat and callippe soups. You are putting an entire species at risk trying to please your needs. Sea turtles are better living than dead. They will stay around for over hundred years. Even your grandchildren will enjoy having a look at a live one instead of the National Geographic pictures of ‘have been‘ turtles. I hope this article has helped you understand why sea turtles are endangered and encouraged you to take a stand for preservation of these massive giants.