Do You Know the Incredible Adaptations of a Blue Morpho Butterfly?

A brief write-up on some of the most prominent adaptations of the blue morpho butterfly which are necessary for the survival of this species on our planet. Continue reading...

You are here: Home / Uncategorized / Do You Know the Incredible Adaptations of a Blue Morpho Butterfly?

A brief write-up on some of the most prominent adaptations of the blue morpho butterfly which are necessary for the survival of this species on our planet. Continue reading…

The Menelaus Blue Morpho butterfly is an iridescent species of butterfly which is predominantly found in the tropical forests of Central and South America. The iridescent nature that this species boasts of, is one of the numerous adaptations which help it survive the harsh realities of its natural habitat. (While the term blue morpho is often used to refer to this species, at times it is also used in context of other Morpho butterfly species which are typically characterized by their blue color.)

As we mentioned earlier, the Menelaus Blue Morpho butterfly (Morpho menelaus) is found in Central and South America. The natural habitat of this butterfly spans across the tropical rainforests of this region. With a wingspan of somewhere around 5-8 inches, the blue morpho happens to be one of the largest butterfly that you are likely to come across. As its name suggests, it is typically characterized by its blue wings with black edges and brown underside. As a result of this unique color combination of its wings, its flight is a sight to watch out for. The flutter of its wings creates a mix of blue-brown color which isn’t just a treat for your eyes, but also acts as an adaptation which helps this considerably large butterfly species stay off the radar of its predators.

Predators of the blue morpho species in its natural habitat exist in plenty, and includes various species of birds, fish and some large insects which hunt them for food, as well as jaguar cubs who kill them for the sheer fun when they are in playful mood. Owing to its large size, this butterfly species is easily noticeable, and that can turn out to be dangerous with several opportunistic predators looming at large in the wild. As we said earlier, the iridescent color of this species is by far its best adaptation. While the upper side of the blue morpho butterfly’s wings are bright blue in color, the underside is dull brown. As a result of this variation, when this butterfly starts fluttering its wings it produces a distinct hue which acts as a camouflage and helps the butterfly disappear into the dense vegetation.

More importantly, the flight of this butterfly is such that minimal part of its blue wings is to be seen even in broad daylight, which is crucial as it makes sure that this species doesn’t draw unnecessary attention. When it is at rest, it folds its wings in such a manner that only the dull brown color of the underside of its wings is visible, and this acts as an apt camouflage when the butterfly is resting. The bronze colored eye spots on the underside of its wings also come into play when it comes to defense purpose, as it frightens or confuses the predators and gives the butterfly enough time to escape. At the same time, the fact that the upper surface of blue morpho’s wings is made up of reflective scales also deserves a special mention as it is one of the most important defensive adaptations when it comes to defense against jaguar cubs. The butterfly uses the reflective surface of its wings to reflect sunlight and momentarily blinds the jaguar cubs (as well as other predators) which gives it enough time to escape.

Other noteworthy blue morpho adaptations for survival include a long protruding mouth i.e. a proboscis and the ability to lay a large number of eggs. The specially adapted mouth – which develops when the butterfly moves on from the caterpillar stage to its adult stage, helps it feed on a wide range of foods which is a necessity when it comes to survival in this region. On the other hand, the ability to lay a large number of eggs increases the chances of survival for this species of butterfly, as the surviving members continue to make sure that the reproduction cycle continues even when hordes of individuals are predated upon or die as a result of loss of habitat and human activities.

As unbelievable as it may seem, the fact that a species as fascinating as the blue morpho is threatened by a range of human activities is absolutely true. While habitat loss as a result of deforestation is indirectly affecting this species, the fact that they are caught by butterfly collectors and put for display affects them indirectly. The adaptations which help this species survive the harsh realities of the wild, have turned out to be a curse for them by making them vulnerable to exploitation at the hands of humans. 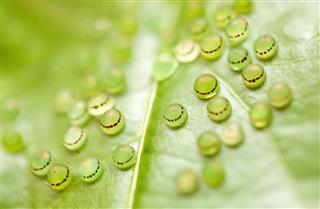 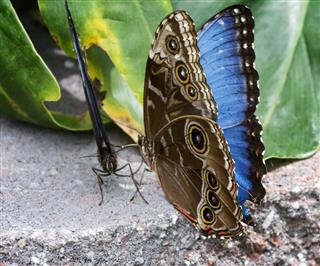 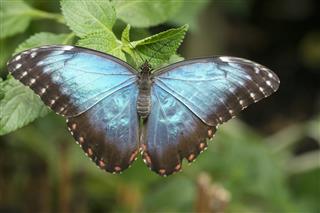