Looking for some interesting Deathstalker scorpion facts? This article is filled with interesting facts and information about this venomous predator of the desert.

You are here: Home / Uncategorized / Terrifically Petrifying Facts About the Deathstalker Scorpion 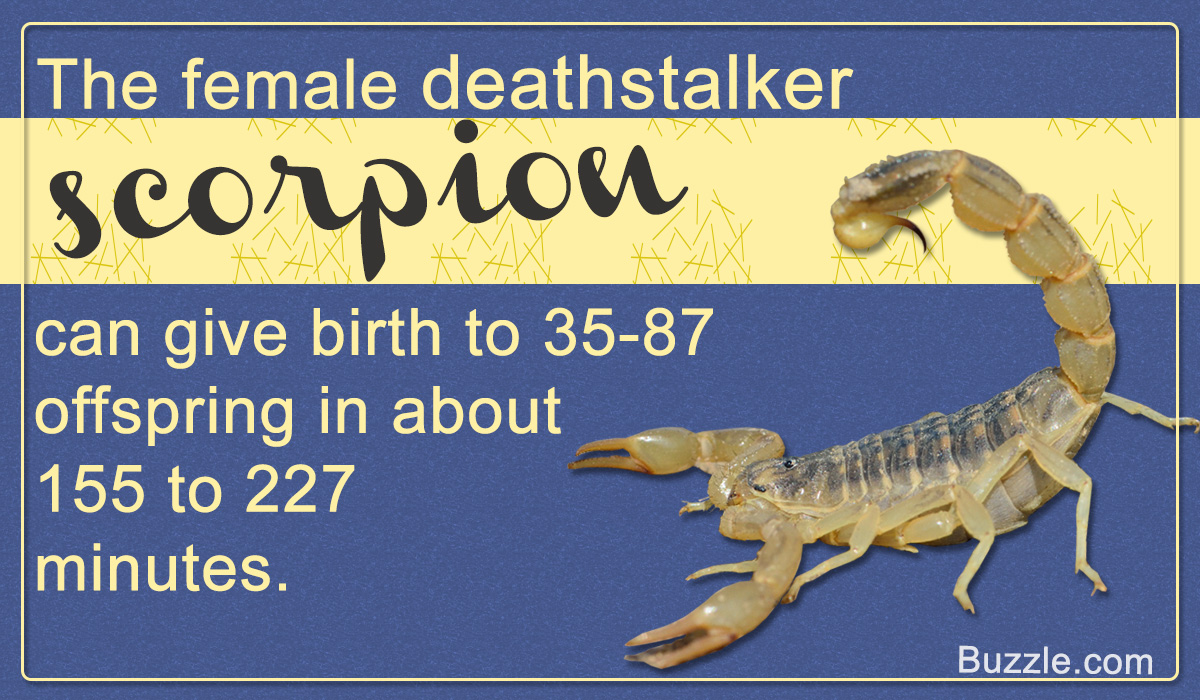 Looking for some interesting Deathstalker scorpion facts? This article is filled with interesting facts and information about this venomous predator of the desert.

Scorpions have been living on the face of this earth long before the birth of dinosaurs. They have been extraordinary hunters for over 400 million years and they have gotten pretty well at what they do. Although their appearance is similar to that of a lobster, there’s a huge difference between the two. The biggest difference is that stingy venomous tail which they use for their defense and for killing their prey. There are more than 1500 species of scorpions on this planet and most of them carry venom that can kill a human in few minutes.

They can grow up to 4.5 inches in height. These scorpion are mostly found yellow in color, however, they are capable of changing color for camouflage.

The average life span of a Deathstalker is 2 to 6 years. Deathstalker scorpions undergo the process of molting at least 7 times before they reach the age of sexual maturity.

The Deathstalker are also known as Palestine yellow scorpion, Israeli desert scorpion, Omdurman scorpion, and Leiurus quinquestraitus. They belong to the arachnid family and are a popular species of scorpion found in desert regions of the African continent. They are mostly found in dry regions, viz. Iran, Mali, Niger, Algeria, Bahrain, Chad, Egypt, Somalia, Lebanon, Pakistan, Syria, UAE, Yemen, Jordan, Iraq, and Israel. However, they prefers humid climate and tend to live longer in such places.

The Deathstalker’s diet consists mainly feeds on crickets and other smaller insects. In times of food scarcity of food, they can even act as scavengers.

Female Deathstalkers are larger in size than males, this helps them accomplish their reproductive tasks. In this species, the female has got the deciding authority of who she’ll mate with. She may have several males calling for her but not all of them will get a chance. Gestation period is from 3 to 5 months and the mother can give birth to almost 30 young ones at once. After they are born all of them climb up and stay on their mother’s back, which becomes their residence for several weeks.

The Deathstalker are very poisonous and their venom contains a potent mixture of neurotoxins, which lead to immense and unbearable pain. This venom can cause coma, fever, paralysis, convulsions, and even death. The effect of the venom mostly depends on the pincer. Stronger and larger the pincers less powerful venom, weaker the pincers the more lethal the venom. These scorpions are very aggressive and very anti social in nature and they tend to become very nervous if kept in captivity.

The Deathstalker’s bad temperament make very risky pets as they can easily attack anyone. Therefore, many countries have banned trading of Deathstalkers. However, some countries have adopted laws stating that people can neither keep nor trade this scorpion without a license.

If someone gets stung by the scorpion, they are recommended to apply ice on the affected area and rush to the nearest hospital.