A Stunning List of Different Species of Chameleons With Pictures

The following article will help you identify some of the most unique chameleon breeds. These prismatic lizards spend their life in trees, and have the most amazing adaptations. Let's take a detailed look at some attractive species of chameleons.

You are here: Home / Uncategorized / A Stunning List of Different Species of Chameleons With Pictures 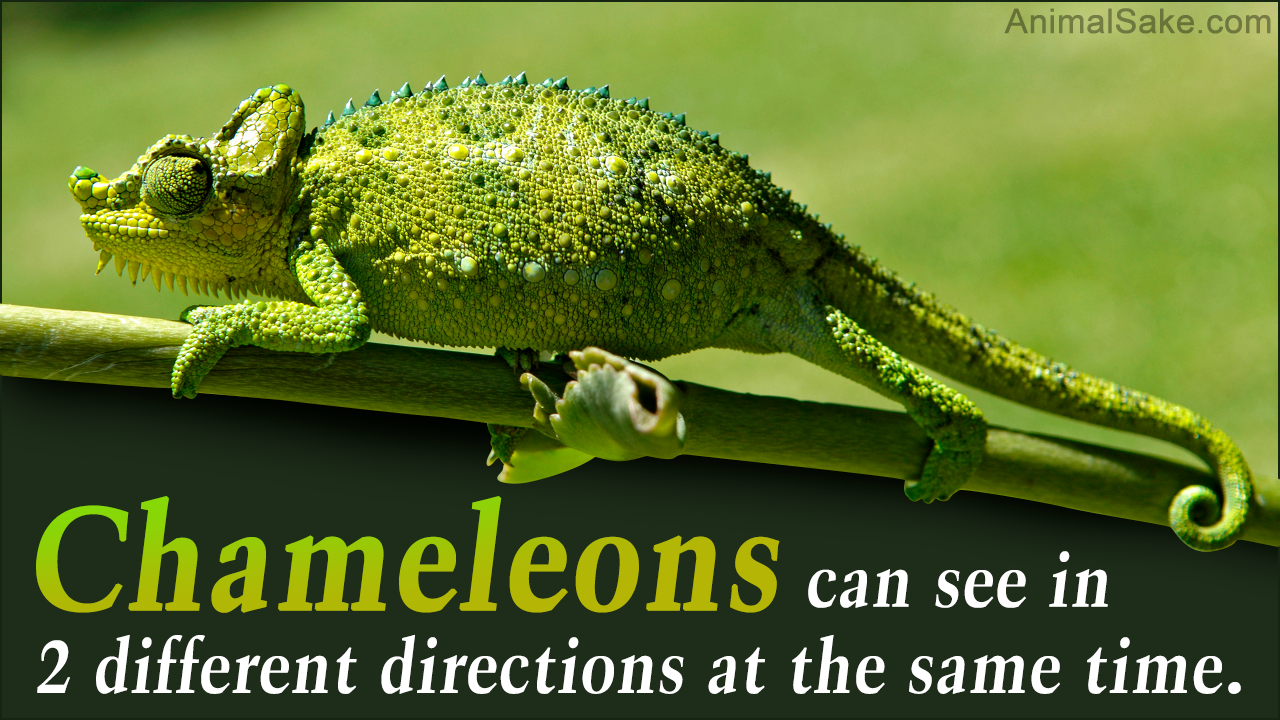 The following article will help you identify some of the most unique chameleon breeds. These prismatic lizards spend their life in trees, and have the most amazing adaptations. Let’s take a detailed look at some attractive species of chameleons. 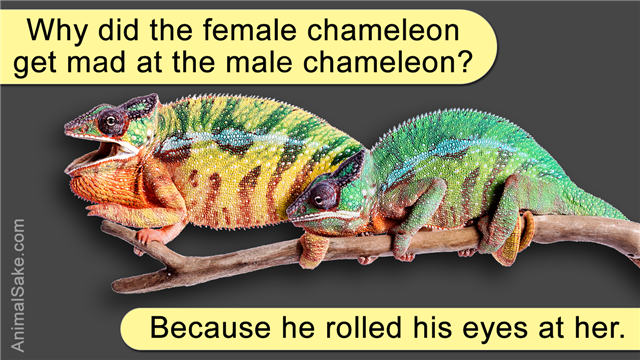 The ability to change color is the most intriguing feature of a chameleon. They have sharp claws, that enable them to have a firm grip while clinging onto branches or climbing trees. They have an ability to move their eyes, each at the same time in different directions. This enables them to have a complete 360° view of their environment. We know that a chameleons is a master of camouflage, but the truth is that the change in color is often a part of social signaling or it can be a reaction to temperature and other conditions. However, such characteristics make them one of the strongest predators, amongst their reptilian family species. The following table illustrates different species of chameleons.

The vibrant colors of the panther chameleon make it the most beautiful and eye-catching lizard in the animal kingdom. Males have an average length of 20 inches and females measure around 17 inches. Males are more colorful, and look more striking than females. In case the female panther chameleon has laid eggs many times or is carrying eggs, she will turn into a dark brown or black color to indicate that she is not interested in mating. Average lifespan of a panther chameleon is around 10 years. Females, after laying eggs, live for 2-3 years.

This chameleon species has a distinct difference between its male and female members on the basis of size. Males are larger, reaching a length of 15 inches and have a impressive 1 inch sized horn extending from their foreheads. Females are smaller in length, their maximum length is 9-10 inches. It is mistakenly assumed that they are hornless, but females have tiny horns, which extend just 1/8 inches out of their heads. This is a hardy and tough reptile, which is used to living in high humidity and high temperature conditions. Females lay 10-20 eggs in a clutch. The eggs take around 5-6 months to hatch, which is a rather fast process, when compared to other chameleon species.

This medium-sized chameleon comes in many colors. It often shows a dark coloring, when basking in the sunlight, as darker colors can absorb maximum heat. The males are larger than the females. They have a single horn, serrated back, and tiny spikes on their neck. Females have a broader casque and tail. While putting up a strutting display during courtship, males exhibit bright colors to compete with other males. The pair stays together till the end of the breeding season, and split up right after the birth of babies. While catching their prey, the chameleon can extend their tongue to lengths, equivalent to that of their body length.

Jackson’s chameleons are medium-sized lizards that grow up to a maximum length of 12 inches. Average lifespan of this species varies, but males tend to live longer than females. The young reach their sexual maturity in 5 months. The gestation period lasts up to 5-6 months, and after that, females give birth to 8-10 live babies. These reptiles are bright green in color, but there are cases where their colors have been blue and yellow. Depending on their mood, external temperature, and their health conditions, they change their color. 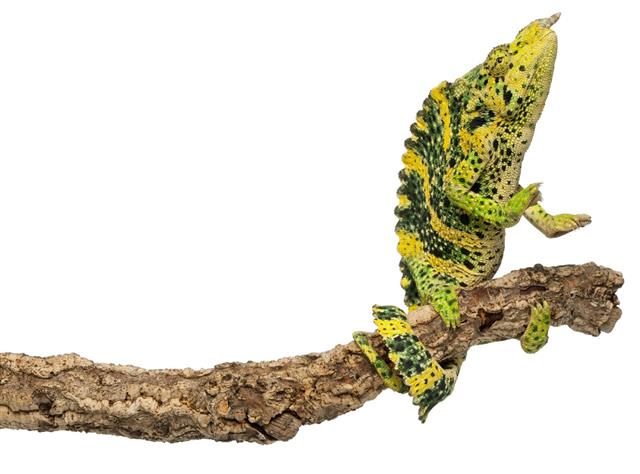 This is amongst the largest chameleon species, that reach up to 24 inches in length and weigh around 600g. Females are shorter than males and have small dorsal crests. The flanks of this chameleon are colored brown, black, yellow, or dark green. The chameleon has deep green color with white stripes across its body. It can change its color to different shades of green, black, and other different colors. The female Meller’s chameleon lays around 80 eggs in a clutch, and the newborns are 4 inches in length. The average lifespan of these reptiles can go up to 12 years.

The Namaqua chameleon has amazing adaptations, and is well suited to survive the harsh conditions of the desert. The chameleon turns darker in the shade, to absorb more heat during cooler nights, and turns gray during the day. The female lays 20 eggs, which take around 100 days to hatch. The Namaqua chameleon is quick at catching prey. Due to the scarcity of food in deserts, they don’t want to let go their food. The common predators of Namaqua desert chameleon are eagles, jackals, and hawks. Namaqua chameleon can spread its toes wide apart, which helps it to crawl faster on the ground.

They are the second largest chameleon species. The two subspecies,Calumma parsonii and Calumma p. cristifer can reach lengths of 27 inches and 19 inches respectively. The female Parson’s chameleon lays 50 eggs once in two years. These eggs take around a year to hatch. As soon as the eggs are hatched, the young ones are left on their own to survive in the wild. In some cases their eggs take two years to hatch. The length of the tongue is more than the body. They are often found in running water. The lifespan of a Parson chameleon is seven years.

These are small-sized chameleons, reaching 3 inches in length. They are mostly tan or brown colored. They usually change colors as it helps them blend into their environment. When they are stressed or angry, they change into a dark color. They resemble a dry leaf, and often adopt this look while sleeping in the open. As per their emotion, they can change their color into green, orange, black, and brown. A Pygmy chameleon has a tongue longer than its body, which allows it to catch smaller insects. They have eyes that can move independently and scan their environment. These chameleons are also known as bearded leaf chameleons or bearded pygmy chameleons, because they have a beard (a few raised scales) below the mouth.

The environment of a Veiled chameleon determines its coloring. The chameleon is green in color, but changes into dark lime or red color, if there is a slight change in its mood and environment. Males have spurs on their hind legs, which grow as they mature. Both males and females have casques on their heads. Males reach up to a length of 24 inches and females grow to 12 inches. Males display striking colors to compete with other males and to attract females.The female lays 20-70 eggs in each clutch.

Ability to change the color as per their emotional state and surrounding temperatures make these invertebrates special. They have excellent adaptations, and are known to live a solitary life. They are less active, and often stay motionless, and wait for a prey to pass by. Different kinds of chameleons have now caught the attention of people, and are often referred to as exotic pets. However, these lizards are born wild, and therefore owners must provide an environment as close to their natural habitat as possible, to assure the longevity of these beautiful creatures. 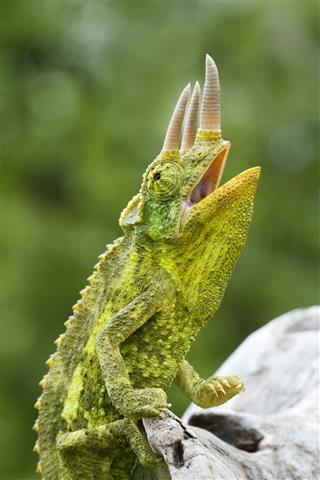 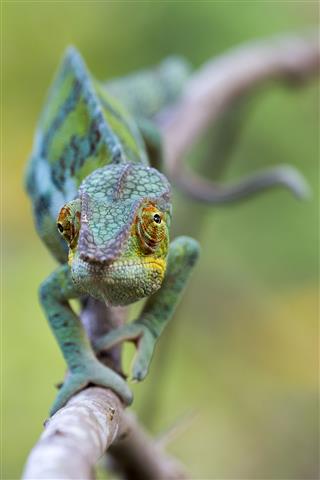 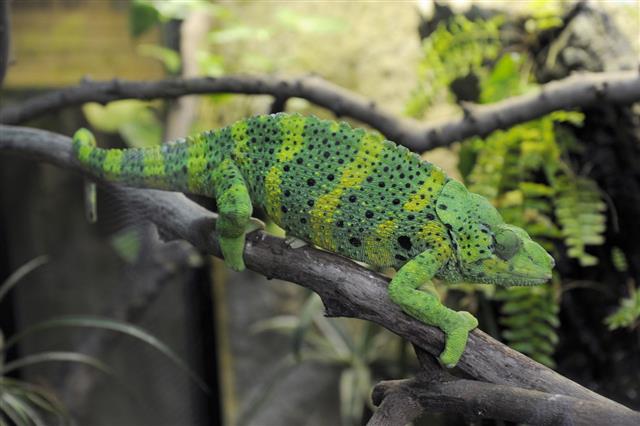