Cute and Cool Facts About the Relatively Rare Black Squirrels

What are black squirrels? Where are they found? What gives them their black color? Are they a separate species? Here, we will answer these and many more questions for you. Take a look.

You are here: Home / Uncategorized / Cute and Cool Facts About the Relatively Rare Black Squirrels

What are black squirrels? Where are they found? What gives them their black color? Are they a separate species? Here, we will answer these and many more questions for you. Take a look. 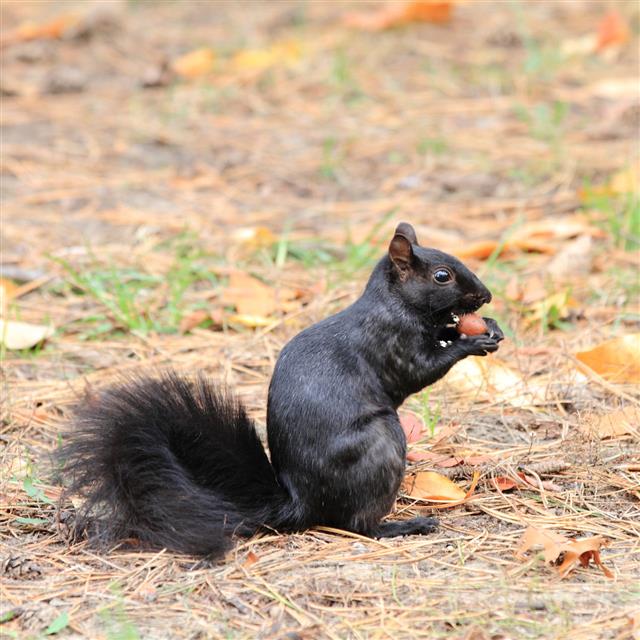 ▸ While squirrels come in many colors, the most common being red, brown, gray, and black, some are less common as compared to others.

▸ Black squirrels are comparatively rare, but you will be surprised to find that they are not really as exotic as they seem to be.

▸ They are concentrated in the Midwestern and Northeastern United States, and are also found in Britain, Quebec and Ontario.

▸ It is surprising to note that they are not actually a separate variety or species of squirrels. Black squirrels are actually eastern gray squirrels with a genetic condition called Melanism.

▸ The largest populations of black squirrels are in Ontario, Canada, and in Ohio, USA.

▸ The city of Kent, Ohio has a particularly large population because they were introduced to the area by a scientist hoping to study their impact on the local ecosystem.

▸ Another place where black squirrels were artificially introduced is Battle Creek, Michigan.

▸ The presence of these squirrels in Great Britain is a result of their introduction in the 1800s.

Despite the large populations of black squirrels in these areas, they still account for only about 1 out of every 10,000 eastern gray squirrels.

▸ Apart from their unique appearance and a few advantages resulting from their melanism, black squirrels are the same as eastern gray squirrels.

▸ They hoard food in trees, underground, and in other secret locations, and they build nests in trees to stay dry and warm. Their diet is varied and adaptable, consisting of nuts, berries, and other plant material.

▸ They are often abundant in urban areas because they can easily coexist with humans.

▸ Because melanism is a genetic mutation rather than a normal variation of a pigmentation gene, it is normally not possible for two gray squirrels to have black babies. However, if a black squirrel and a gray squirrel mate, it’s possible that the offspring will be brownish-black in color if they inherit the mutated pigmentation gene from the black parent.

▸ Interestingly, it is possible for two black squirrels to have gray-colored babies, if both the black squirrels are brownish-black, meaning that they only have one copy of the mutated gene. In this case, the children could receive two copies of a normal pigment gene, resulting in the standard gray color.

Melanism and its Advantages

▸ Melanism is a genetic condition that can occur in many species. Creatures with this condition appear completely black due to the dark pigment in their skin.

▸ Albinism, which causes creatures to appear white or very light in coloration, is considered to be the opposite of melanism. Although in most species melanism is very rare, in some species it has become rather common. In these species, the condition is called adaptive melanism.

▸ Black panthers are a well-known example of adaptive melanism. This is the same condition that affects black squirrels.

▸ Black squirrels have some advantages over their lighter-colored counterparts. For example, they are better camouflaged in the dense, dark forests of the eastern United States.

▸ Since the colonization of North America, black squirrels have become less common than gray-colored eastern gray squirrels because deforestation has made the melanistic coloration less advantageous.

▸ However, it is still good to be a black squirrel in the cold north. The black skin allows them to absorb more of the sun’s heat, thus helping them stay warmer in the winter months.

Since black squirrels are rare compared to other squirrels, many cities, universities, and towns have made this squirrel their mascot, and are doing their bit to publicize the local populations of these squirrels.