Have you ever come across a snail that has a shell with yellow or golden spots with a black outline? Well, if not, then meet the flamingo tongue snail, the most common and perhaps, the most beautiful gastropod of the Caribbean waters. 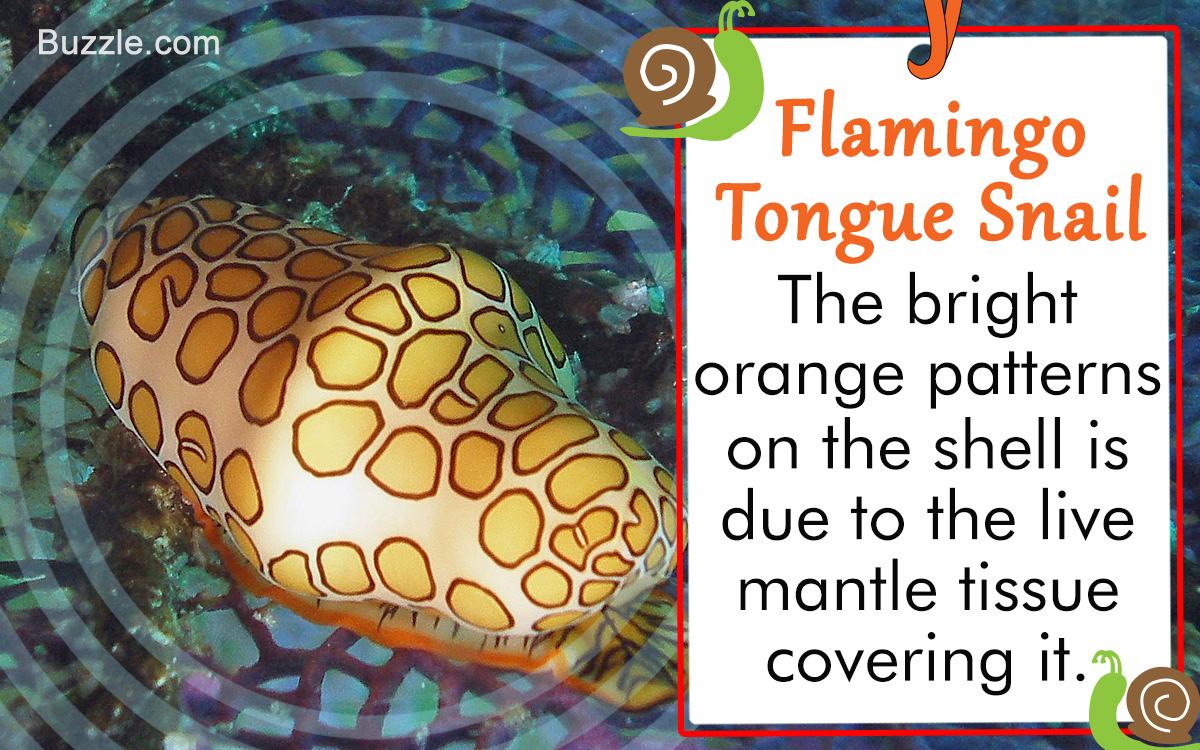 Have you ever come across a snail that has a shell with yellow or golden spots with a black outline? Well, if not, then meet the flamingo tongue snail, the most common and perhaps, the most beautiful gastropod of the Caribbean waters.

… that the flamingo tongue snail uses toxic chemicals present in corals to produce toxic substances that are deposited in its mantle.

The flamingo tongue snail (Cyphoma gibbosum), a marine gastropod mollusk, belongs to the family Ovulidae, which includes small to large sea snails that are predatory or parasitic. The ovulid family is commonly known as ‘cowry allies’ or ‘false cowries’. The snail in question here, the flamingo tongue, is an ectoparasite that lives and feeds on coral polyps. The animal has a complete digestive system and an open circulatory system. The mantle performs the function of gills, as it absorbs oxygen and expels carbon dioxide. Metabolic wastes are excreted through openings in the shell. This article shall tell you more about this species of snails through a series of interesting and little-known facts. So, here we go!

The shape of the shell is elongated, with a transverse ridge running along the dorsum, which is otherwise smooth. The dorsum may be white or pale orange, while the inner part is white or pink. These shells are characterized by a wide aperture and resemble the cowry shells to some extent.

The average length of the shell is around 25-35 mm. The smallest shell length recorded is 18 mm, while the largest is 44 mm.

Adults are dioecious, which means the male and female of the species are distinct. However, they look identical. The young ones can be identified easily, as they are smaller and thinner as compared to adults.

The bright orange patterns that you see on the shell are due to the live mantle tissue covering it, and they disappear when the snail dies.

Exhibits bilateral symmetry. Visceral mass is asymmetrical as a result of torsion in the larval stage.

The animal inside is brightly colored, but the shell is pale white.

It has tentacles and a head with two pairs of sensory organs that look like horns. These ‘horns’ have eyes at their ends.

These snails have been found to exist at a maximum depth of 29 m. However, they are more commonly found at depths of around 2 to 14 meters.

The flamingo tongue snail is found in coral reefs and feeds on coral polyps.

It is an ectoparasite that attaches itself to certain species of octocorals and gorgonians. However, they never kill their host, as the coral slowly undergoes regeneration to replace the affected areas. Also, the snails change their host periodically.

The larvae feed on plankton and attach themselves to the corals.

Like all gastropods, flamingo tongue snails use their feet for feeding!

They use a sharp tongue called the radula that scrapes away coral tissue and leaves behind the skeleton.

When exploring a new host, flamingo tongue snails take a few bites, leaving behind a trail that resembles a dotted line. This is termed as sampling.

Mating aggregations are brought about by mucus trails that serve as attracting pheromones. The mating process can last up to 4 hours.

The female snail lays eggs after a period of 4 days, and this process is known as oviposition. The female lays eggs on the grazed portions of its host coral.

The eggs are enclosed in dome-shaped capsules, and each capsule can contain as many as 300 embryos, giving it a speckled appearance.

Within 10 to 12 days after an adult female lays eggs, the larvae emerge. The larvae feed on plankton and develop into young snails that are less than 5 mm in length.

The average life span of the flamingo tongue snail is around 2 years.

When the snail is attacked, it can draw the colorful mantle tissue back into the shell.

The colorful mantle is used as a warning for predators to ‘stay away’. This phenomenon is termed as aposematic coloration.

As we have seen before, these snail species feed on gorgonian octocoral species that grow in the coral reefs of the Caribbean. However, scientists have observed that these snails have reasons to choose a particular species of coral. These reasons can vary from quality of food and the size of the coral spicules, to the suitability of the site for laying eggs.

These snails can travel across the sea bed in search of a new host.

Mucus trails are the method of communication used by flamingo tongues. When wandering in search of a host, a flamingo tongue snail can trace and follow the mucus trail of another, in order to reach a host sooner.

It is a bit difficult to spot the young ones, as they attach themselves to the underside of corals.

The flamingo tongue snail is not a rare species, and is commonly found in the regions mentioned above. However, a major threat to the species is the over-collection by scuba divers and snorkelers, who consider the species a prize catch because of the beautiful patterns on the shell.