Golden snub-nosed monkeys are endemic to the temperate forests of China. AnimalSake tells you more on this rare species of primates. 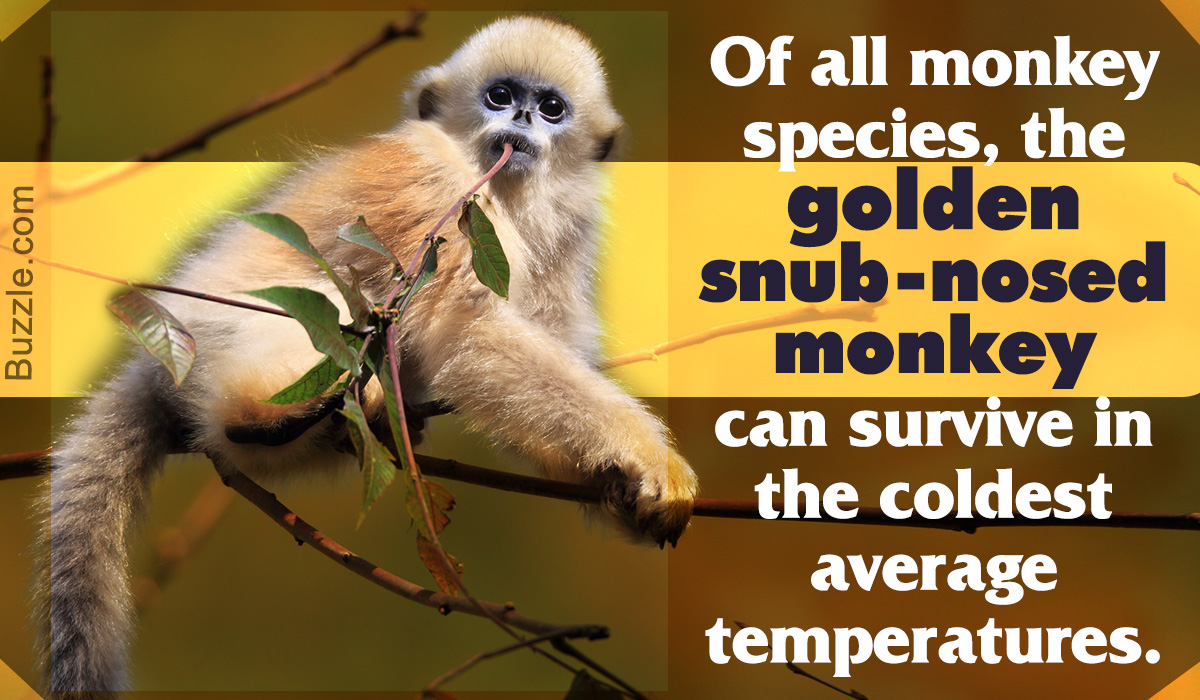 Golden snub-nosed monkeys are endemic to the temperate forests of China. AnimalSake tells you more on this rare species of primates.

The name of the species roxellana is inspired by the supposedly snub-nosed courtesan of Suleiman the Magnificent (a 16th century Sultan of the Ottoman Empire).

The golden snub-nosed monkey is an Old World monkey belonging to the Colobinae subfamily. This monkey is indigenous to southwestern part of China, having a Chinese name as Sichuan golden hair monkey. These monkeys are named after the peculiar shape of their nose and bright golden-colored fur. Having a well-defined social organization, golden snub-nosed monkeys live in troops as big as 600 and get divided into groups of 60 to 70 during winter.

The following are some interesting facts about these primates.

The golden snub-nosed monkey, that is endemic to China, is limited to the provinces of Sichuan, Shaanxi, Gansu, and Hubei.

The head-to-body length of this monkey is 57 – 76 cm, with a tail length of 51 – 72 cm. Average weight of males is 20 kg, while that of females is 12.5 kg. While the back of the golden snub-nosed monkey is covered with long silver hair, the upper arms, back, tail, and shoulders are blackish-gray in color. The neck, forehead, and sides of the neck are golden-colored in males.

The golden snub-nosed monkey displays prominent differences between males and females, especially the adult and sub-adult monkey. Females are usually distinguished from males by the presence of darker tones (black) on their forehead and upper parts. Infants have a light brown coat that generally looks white in sunlight.

Primarily diurnal herbivores, the diet of these monkeys varies with each season. Since lichens are present throughout the year, they largely feed on them―especially the lichens belonging to the family Usneaceae, followed by young leaves, buds, fruits or seeds, shrubs, and vines.

During the months of May – July, the golden snub-nosed monkeys’ diet is dominated by lichens and leaves, August – October by lichens, seeds, and fruits, and from November – April, lichens take almost entire portion of their diet.

Being highly social, the two main social groups that golden snub-nosed monkeys display are the multi-female one-male unit (OMU) and the all-male unit (AMU). The AMUs often contain 3 – 6 males, whereas in the OMU, it is possible in rare cases, to have more than one male as the highest-ranking monkey. In the OMU, males lead as well as follow the troop, and the OMUs travel at the middle. The total number of primates in the OMU range between 9 – 18 on an average, while in the AMU, the range is between 4 – 7.

These monkeys communicate in ventriloquial manner, that is, they have the ability to vocalize (here, in almost 18 different types) without any visible sign. Studies state that in the wild, the golden snub-nosed monkey uses 5 major calls for communication―alarm calls, warning calls, amazement calls, peaceful calls, and contacting calls. They also show aggressive interactions and friendly behavior.

Following a polygynous mating system, copulation takes place between September and November and is at its peak in the month of November. Generally, the female initiates the mating, and is rarely led by males. After a gestation period of 6 months, the females give birth between March and May.

In the wild, the infant monkeys are observed to stray away from mothers when they are around 23 days old, and social skills are developed after 2 to 3 months. The entire group becomes immensely protective about the offspring and can resort to violent behavior if they spot a threat.

Owing to the rapid decline of the population of the golden snub-nosed monkey, the IUCN has classified this species as Endangered. The Chinese government has now exercised stringent laws and formed protective reserves, which has led to a significant rise in the monkey’s extant population.