Amazing Facts About the Mimic Octopus

The mimic octopus, a fairly recent discovery, was first found in Indonesia, off the coast of the island of Sulawesi, in the early 90s. This late discovery is attributed to the mimic octopus' intelligence, since before this, scientists always observed it impersonating some other sea creature, and not its true self. Find out what makes this aquatic species stand out, why was it named so, and other amazing facts about the mimic octopus through this AnimalSake article.

You are here: Home / Uncategorized / Amazing Facts About the Mimic Octopus

The mimic octopus, a fairly recent discovery, was first found in Indonesia, off the coast of the island of Sulawesi, in the early 90s. This late discovery is attributed to the mimic octopus’ intelligence, since before this, scientists always observed it impersonating some other sea creature, and not its true self. Find out what makes this aquatic species stand out, why was it named so, and other amazing facts about the mimic octopus through this AnimalSake article. 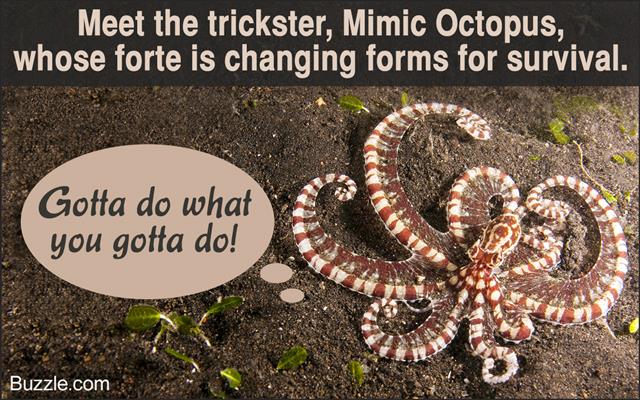 Camouflaging at its Best!

A mimic octopus can change its mimicry pattern depending on the threat it faces. For example, if it is threatened by a damselfish, the mimic octopus will impersonate a banded sea snake, which is a predator of the damselfish, in order to ward it off and save its own life.

The mimic octopus or Thaumoctopus mimicus is just like any other octopus―an invertebrate, one mantle and eight arms―yet, it is not like any other octopus. Its ability to transform itself into (almost) any creature, to protect itself from its predators is what sets it apart. Most of the impersonations that the mimic octopus makes are that of venomous sea animals, making it a highly optimized and successful survival strategy.

» The Thaumoctopus mimicus (mimic octopus) is a small brown octopus that grows up to an average length of about 60 – 70 cm or 2 ft. Its brown body is covered with white spots or stripes. Just like other octopi, the mimic octopus has a mantle with three hearts, eight arms and tentacles that are around 25 cm long and about 1 – 2 cm wide.

» The mimic octopus makes use of chromatophores present in the pigment sacs on its skin to transform its appearance. These pigment sacs can be expanded or contracted by the octopus to get the desired change of color and appearance.

» The mimic octopus is often confused with the wonderpus octopus.

Where is it found?

Distribution: It was first discovered in Indonesia. It is mostly found in the tropical waters of South East Asia, muddy and shallow waters of the tropics, and Indo-Pacific ocean near Sulawesi and Bali in Indonesia.

Habitat: The animal prefers to stay in a habitat that is closer to estuaries (the wider part of the river which approaches the sea) or river mouths. These regions are extremely muddy, cloudy, and turbid, against which the brownish-white octopus can easily camouflage itself from its predators. It favors these bays that are extremely rich in nutrients and are well populated with smaller fish and crustaceans, since it feeds on these animals.

What does it eat?

» The mimic octopus feeds on smaller fish and crustaceans like crabs, lobsters, and shrimp. Depicting characteristics of an opportunist hunter, it disguises itself against a suitable background of corals and sea rocks, and waits to hunt on its prey.

» The mimic octopus is believed to be a carnivorous sea animal, and doesn’t feed on sea vegetation or flora of the sea.

It is yet to be proven scientifically, whether the mimic octopus is a poisonous creature or not. The survival strategy of camouflaging itself might suggest that it is not. Scientists and zoologists believe that if the creature were poisonous, it wouldn’t have had to hide itself from its predators. It would have just attacked them with its poison.

How many sea animals can it impersonate?

Although many animals exhibit such a survival instinct by transforming their appearance or camouflaging with the surroundings, the mimic octopus is the only aquatic species that can transform into more than a few, with respect to behavior, shape, color, and size. It has the ability to mimic the flatfish, lion fish, sea snake, brittle stars, sea anemones, jellyfish, stingray, crabs, and shrimp among other creatures.

Flatfish
The octopus apes the flatfish by pulling all its arms together and floating parallel to the ocean floor. The otherwise invertebrate and fleshy snack of a mimic octopus now looks like a poisonous flatfish, thus warding off predators.

Lion fish
The lion fish is a sea animal found in the Indo-Pacific region where the mimic octopus resides. The octopus imitates the fish by spreading out its tentacles that resemble the spikes of the lion fish.

Sea Snake
The mimic imitates a sea snake by burying four of its arms and the mantle into the sand or ocean floor, keeping only its eyes and two arms above the ocean floor, making it look like a brown-white striped venomous sea snake lying across the ocean bed.

Is the mimic octopus same as the wonderpus octopus?

» Although both are ‘almost’ similar in appearance, the Thaumoctopus mimicus (mimic octopus) should not be confused with Wunderpus photogenicus (wonderpus octopus).

» The most noticeable difference is the presence of a bright white line marking the base of the suckers in the mimic octopus, which cannot be found on the wonderpus octopus.

» The mimic octopus can be identified by the presence of irregular white and brown stripes on its mantle and tentacles. Whereas, the wonderpus octopus is characterized by a mantle and tentacles that are covered with white spots at approximately fixed distances.

» Behavioral differences also set the two species apart. For example, the mimic octopus is a diurnal creature, whereas the wonderpus octopus is a crepuscular animal, found to be active mostly during dusk and dawn.

Since the existence of this species has been acknowledged only very recently, not much is known about the fluctuation in its population in various areas. However, the smaller numbers of this species could be a result of the chemicals that are released into the water bodies through the estuaries and river mouths, areas where the mimic octopus is generally found. 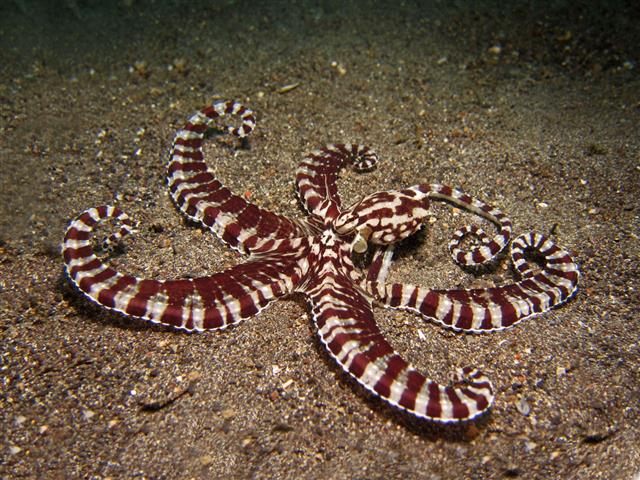