Grasshoppers are insects belonging to the order Orthoptera and suborder Caelifera. They are voracious plant eaters and are seen to be quite harmful to agricultural crops. They spit a brown, bitter liquid called 'tobacco juice' when provoked, as their defensive behavior.

You are here: Home / Uncategorized / Unimaginably Fabulous Facts About Grasshoppers 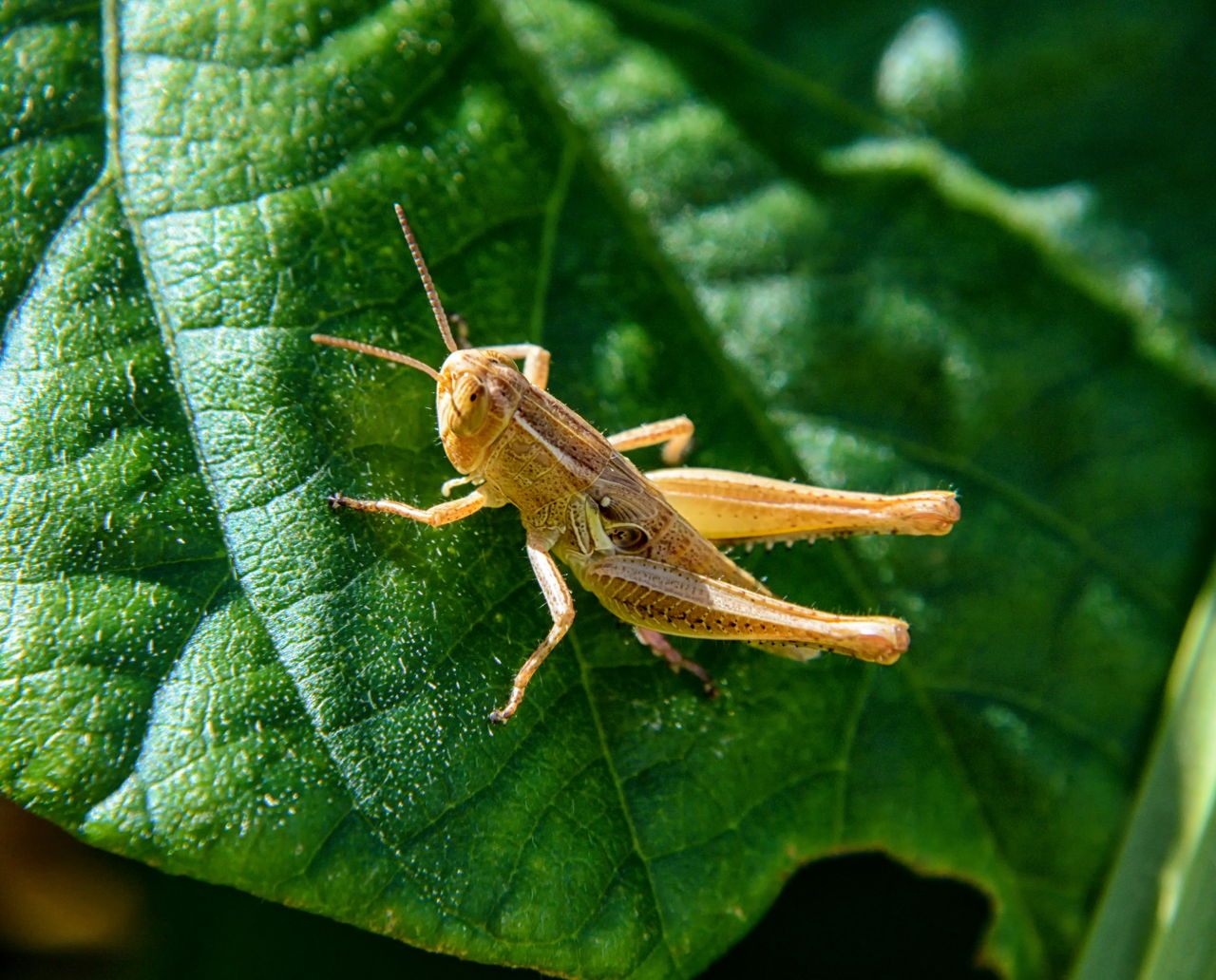 Grasshoppers are insects belonging to the order Orthoptera and suborder Caelifera. They are voracious plant eaters and are seen to be quite harmful to agricultural crops. They spit a brown, bitter liquid called ‘tobacco juice’ when provoked, as their defensive behavior.

Around 18000 kinds of grasshoppers are known to mankind today and can be found across the globe, except the north and south pole regions, where the temperatures are extremely low. They are predominantly found in the temperate regions and can be observed flying around in meadows, fields and just about any place, they can find leaves to munch on. They are mostly noticeable in autumn, but are found in summer and spring as well. A grasshopper’s life cycle consists of three stages: egg, nymph and adult. The grasshopper’s body is covered by a hard exoskeleton and is divided into three parts: head, thorax and abdomen. The body also features two pairs of wings, two antennae and six jointed legs, of which the front short legs are used for walking and holding the prey, while the long hind legs are used for hopping. The classification of grasshoppers is as follows:

Most grasshoppers feed on any and every plant, they can get their mouthparts on. They feed on agricultural crops such as cotton, clover, wheat, alfalfa, barley, corn, rye, oats and many such crops. Thus, grasshoppers are considered a threat to agriculture. Some types eat only certain varieties of plants, while other species are seen to prefer only grasses.

Grasshoppers have 5 Eyes but No Ears

Grasshoppers possess two large eyes (each with thousands of single lenses) on either side of the head, thereby enabling them to see in all directions. Of the remaining three small eyes, two are found at the base of each antennae and the fifth eye is found between the two antennae. However, the function of these smaller eyes is still unknown. Grasshoppers do not possess ears for hearing; instead they use organs called ‘tympana’ to carry out the hearing function. These tympana are circular membranes located in the first abdominal segment of the body, where the hind legs are attached.

The Mandibles of a Grasshopper are very Tough

Grasshoppers feature a pair of mandibles which enable them to chew from side to side. These mandibles are extremely tough and do not get damaged easily. In fact, they are seen to remain intact even after the grasshopper has been eaten by a burrowing owl. For example, if the owl is seen to consume 100 grasshoppers, then what is found in the pellet (the solid residue which is coughed out by the owl after digestion) are 200 mandibles and a few other tiny parts of the grasshopper’s mouthparts.

Grasshoppers: Some of Nature’s Best Athletes

Grasshoppers can jump up to 20 times their body length. The powerful hind limbs of the insect, enable it to make these long-distance jumps. It is this wonderfully, powerful, jumping ability that makes these insects some of nature’s best known athletes. However, these jumping legs have another purpose as well. Sometimes it is seen that insect dung, called frass gets stuck to the insect after defecation, so the insect uses its long hind legs to brush them off. Thus, these legs have a hygienic application as well!

One attractive feature of grasshoppers is their ability to sing. Different subfamilies produce the songs differently. Some types are found to clatter their wings together in flight, to produce a song, while some rub their wings together to make sound and others rub the pegs on their hind legs to make sounds. Then, there are those types that do not make any sound at all. Male grasshoppers are the ones that sing and they do it in order to attract the females or to warn off the other males.

Grasshoppers are Consumed as Food

Grasshoppers are consumed as a source of protein, in several places across the globe. In China, they are found on skewers ready to be sold as food in the markets. Further, in places like Mexico, they are relished as a snack and in Uganda they are relished as a delicacy. In fact, in Uganda, grasshoppers are an important source of income. Grasshoppers are mainly eaten in Africa, because the daily diet of the people there often lacks (specially during famine) minerals, proteins, fats and vitamins, which are present in these insects. They catch these insects at dusk, place them in water for 24 hours after which they fry, boil or add them to soups. Military personnel are also instructed to gather grasshoppers and consume them, when their food supplies come to a halt or in case they get lost. However, one must avoid consuming raw grasshoppers as there is a risk of being infected by tapeworms.

It’s unbelievable, but true! The notoriously-destructive grasshoppers can at times be beneficial to farmers. Turnbull’s grasshopper (Aeoloplides turnbulli), a species found on the Prairies, is a grasshopper that specifically feeds on weeds. Another two-striped grasshopper (Melanoplus bivittatus) feeds on plants that are toxic to cattle. Natural weed control: what else could a farmer want! They are not that bad after all!

Being the voracious plant eaters that they are, grasshoppers can be quite destructive to agricultural crops and are generally disliked by the farmers. However, they do have a positive side as well. The grasshopper droppings or frass, that fall on the soil return the nutrients back to the soil, thereby contributing to the nutrient turnover. This frass is also consumed by birds and various arthropods and so are a source of food to them. Thus, grasshoppers have their pros and cons, but above all being herbivorous, they form a perfect link between plants and the rest of the ecosystem. 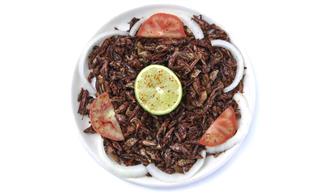 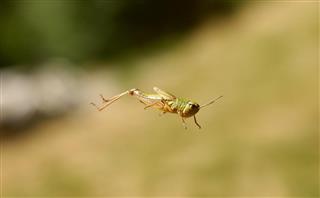 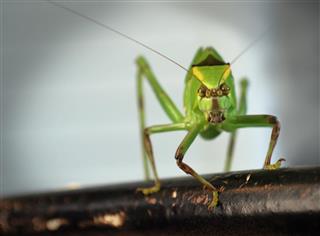 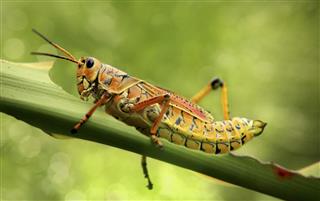 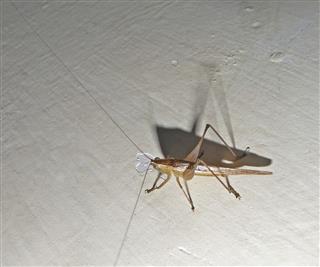 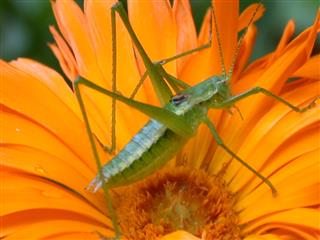 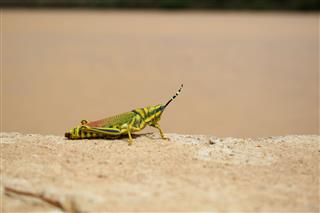 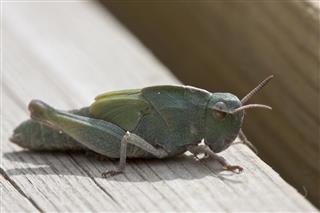 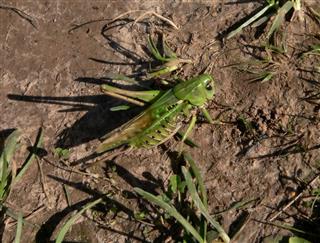 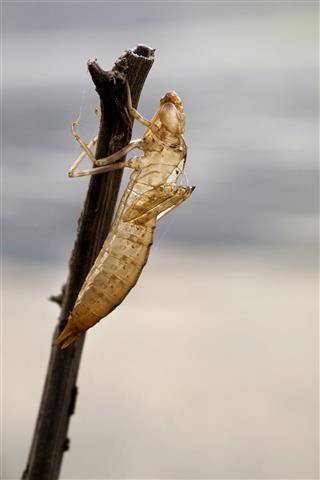 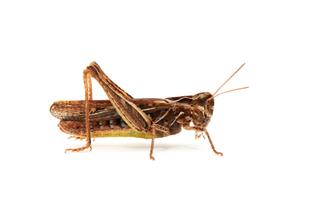 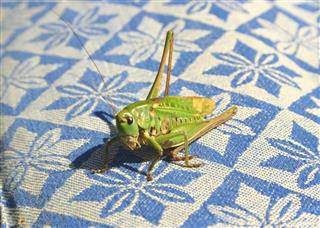 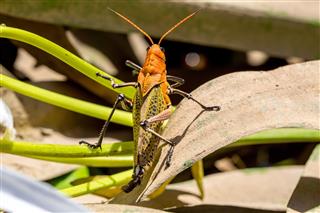 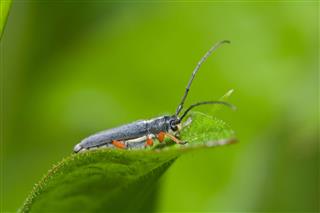 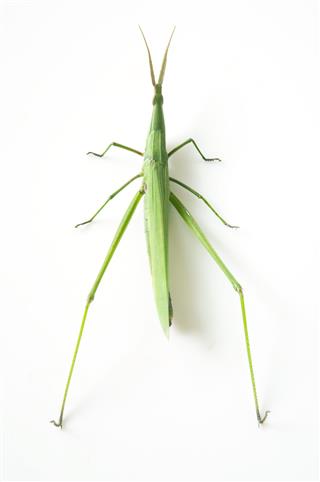