You saw a hummingbird fly past you, or at least you think you did. In fact, what you may have seen could have been a hummingbird moth that looks a great deal like the bird. 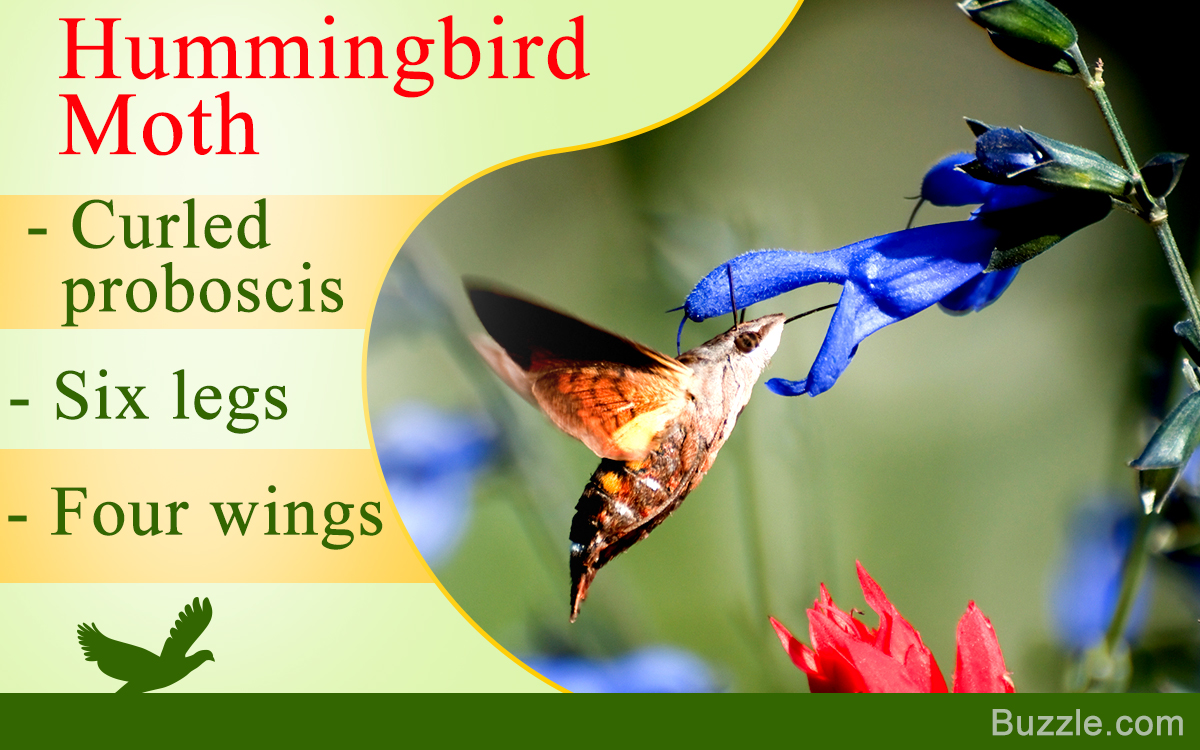 You saw a hummingbird fly past you, or at least you think you did. In fact, what you may have seen could have been a hummingbird moth that looks a great deal like the bird.

The moths belonging to the Sphingidae family are among the fastest flying insects on earth. These moths can fly at over 12 miles per hour.

A hummingbird moth! Yes, you read that right―a moth that resembles a hummingbird to the minutest detail, yet does not even fall into the same species. How is it that an insect could imitate a bird to such an astounding extent? The answer, as suspected, lies in evolution and in a phenomenon known as convergent evolution. This AnimalSake article dives deeper into the mysterious world of hummingbird moths.

What Is Convergent Evolution?

It is an evolutionary phenomenon wherein two species with different lineages end up with similar features despite evolving independently of one another. Convergent evolution causes homoplasy, or the replication of analogous structures that appear similar and have the same function.

❖ Hummingbird moths look almost like the birds they are named after, barring the fact that like all moths, these too have nectar feeders. This feeder is known as proboscis, which is inserted into the flower to reach the nectar.

❖ Like hummingbirds, these moths can sustain flight for as long as they need to feed and can move sideways and backwards.

❖ It is also interesting to note that the hovering of these moths causes a humming sound, thereby, making it look, act, and sound a lot like the bird it has evolved to emulate. 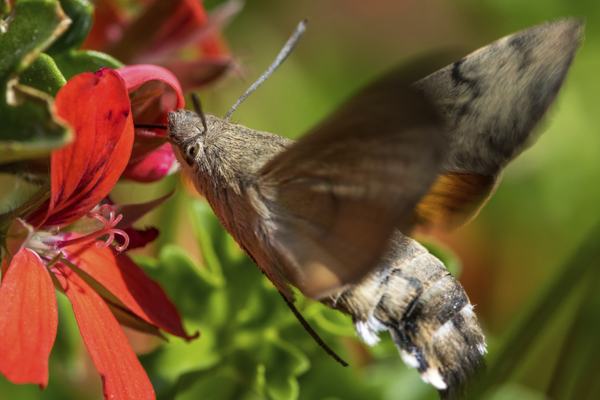 ❖ These moths prefer feeding on the same types of flowers as hummingbirds, and relish flowers such as verbenas, red valerian, butterfly bush, salvia, and cardinals.

❖ Hummingbird moths are 1-2 inches smaller than the birds and have six, long visible legs akin to insects. On the other hand, their feet are so tiny that they rarely show in mid-flight.

❖ Another crucial difference is that, on closer observation, a hummingbird moth will have two antennae on its head and a long, curled proboscis that sticks out of its mouth, when it’s about to feed on nectar.

❖ On the other hand, hummingbirds do not have antennae; however, some may have crests. Secondly, this bird has a long needle-like probing bill that is stiff and thus, unlike the moth’s proboscis, does not curl in or out as and when needed.

❖ Another point of differentiation is that hummingbird moths have forewings with two anterior pair of smaller wings. 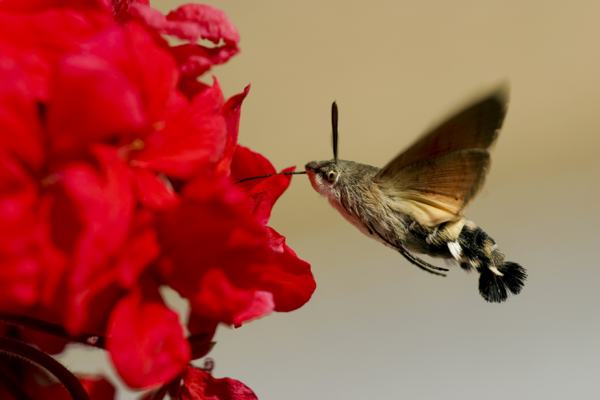 ❖ The hummingbird hawk moth Macroglossum stellatarum can be found in abundance throughout Southern Europe, Asia, and North Africa. However, these moths prefer warmer climates, can survive the winters of Asia, but rarely survive the chilly winters of the northern latitude.

❖ What sets the Macroglossum stellatarum hummingbird moth apart from other hawk-moths is its ability to sustain flight even while it’s raining. 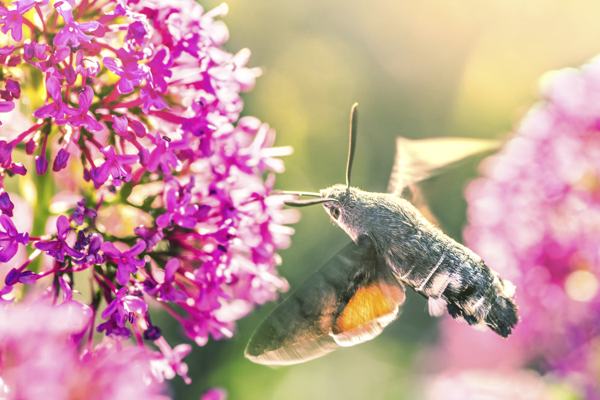 ❖ Secondly, this moth is diurnal by nature and can be spotted hovering in bright sunshine as well as during sunset. The diurnal nature of the hummingbird moth has led scientists to believe that this moth has superior vision and color-learning abilities.

❖ All hawk moths are medium to large in size. However, despite their large size, moths belonging to this family are known for their distinct ability to fly rapidly and hover for longer than most moths. The reason for this evolutionary advantage is credited to their comparatively long abdomen and wings.

Eggs : These moths produce two broods per year. The eggs are round, small, and pale green. The female moth lays over 180-200 eggs on various Galium plants, which act as the host. It takes approximately 6 to 10 days for the eggs to hatch.

Larval Stage : Thereafter, the larvae emerge and are pale yellow. However, they turn green during the second development stage of instar. Like all moths belonging to the sphingids family, hawk-moth larvae too have distinct maroon horns at their rear, which turn blue with reddish tips during their last instar phase. The larval stage lasts for around 20 days.

Pupae Stage : The pupae can be found enclosed within thread-like cocoons near the plant’s base and among its dead leaves. The pupae’s brown color acts as a camouflage to help it hide among the drying leaves and debris of the plant. The structure has distinct horns on the front that contain the moth’s proboscis. There are two spiky horns at the rear of the pupae, which act as a defense mechanism against predators.

Adult Moth : The adult hummingbird hawk-moth breaks through the pupae with two sets of wings, wherein the hindwings are smaller, shorter, and brownish-orange in color. The wingspan of such a moth would be around 1.6-1.8 inches. While the abdomen of this moth is quite long and broad, its rear has a fluffy fan of setae. 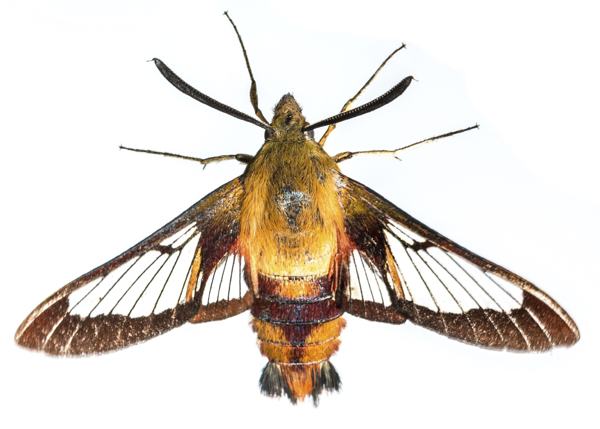 ❖ These moths are mostly found all over North and South America and a few parts of Europe, such as UK, where these clearwing moths are known as Bee Hawk-moths.

❖ As the name suggests, these moths have clear wings that make them visually dissimilar to their counterparts, and unlike hummingbirds, they do not have clear or opaque wings.

❖ However, out of the 17 known diurnal species of hemaris moths, the Hemaris rubra and Hemaris croatica do not have clear wings.

❖ These moths prefer honeysuckle and teasel as host plants to lay their eggs.

❖ The life cycle is more or less the same as the one mentioned above, except that the pupae of these moths are flatter. These moths are smaller than hawk-moths, have a rounder body, and shorter wingspan. 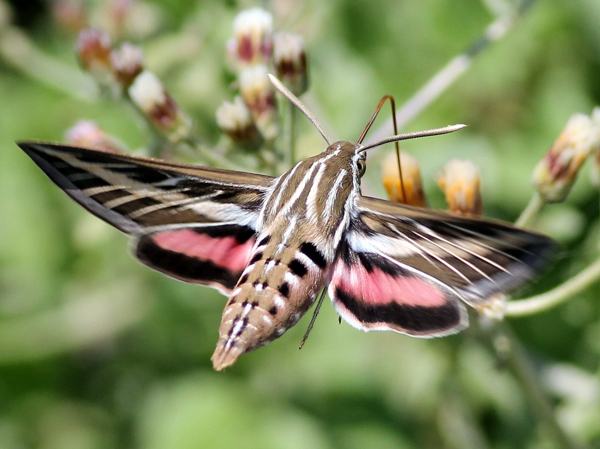 ❖ Also known as the hummingbird moth in the US, the white-lined sphinx moth, Hyles lineata, has very visible white and tan stripes throughout its body and wings (apex to base).

❖ It has a large wingspan that ranges between 2 -3 inches.

❖ This Hyles moth can be found all over Central America and other parts of the US, as well as in warmer areas of Canada. It is also found in southern parts of Mexico and West Indies.

❖ Mainly found in California, it is one of the main pollinators of the Lilium parryi, or lemon lily plant.

❖ The larvae of this moth are usually blackish-yellow and grow green with black stripes and dots. The larvae dig into the soil to camouflage and form into a pupa. They remain in this state for 20-25 days.

So, these were some facts about hummingbird moths that should help you identify and not confuse the moth with the bird, the next time you happen to come across one.