Facts About the Absolutely Adorable Koala

Erroneously referred to as bears, koalas are marsupials found only in Australia. Once numbering in millions, the population of these adorable animals is plummeting. In this article, we tell you more about this species, that once thrived in the land Down Under.

You are here: Home / Uncategorized / Facts About the Absolutely Adorable Koala 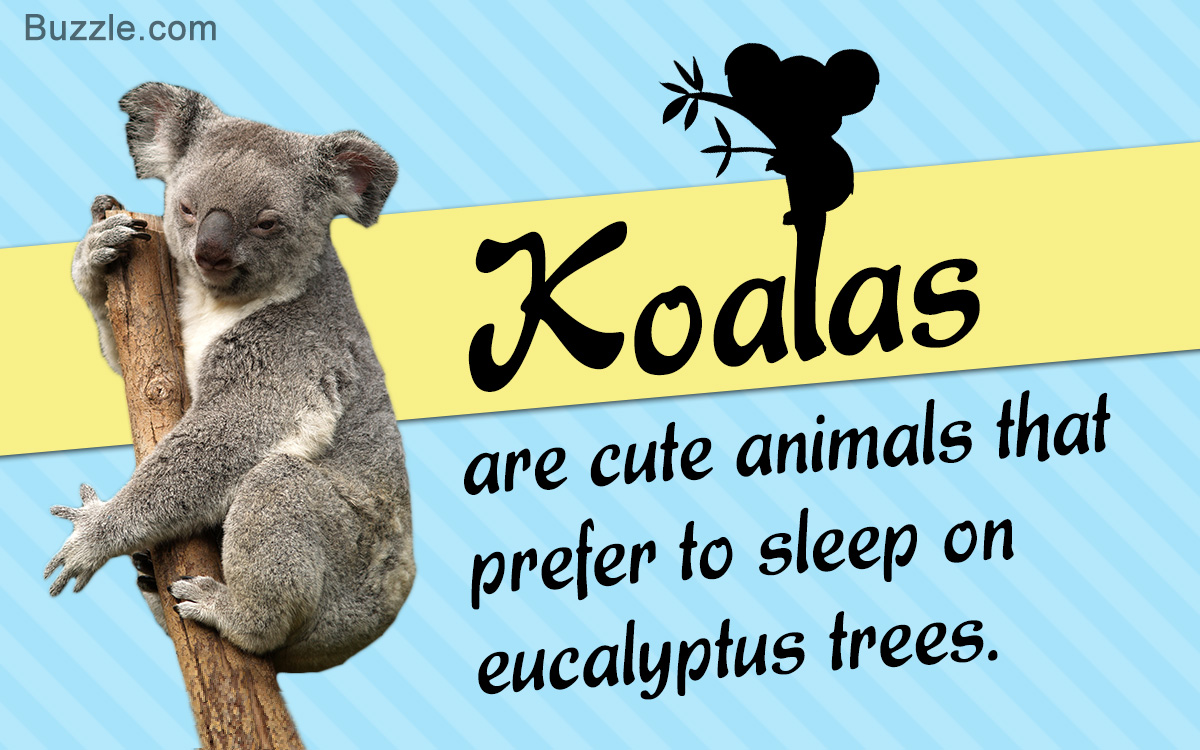 Erroneously referred to as bears, koalas are marsupials found only in Australia. Once numbering in millions, the population of these adorable animals is plummeting. In this article, we tell you more about this species, that once thrived in the land Down Under.

Jimmy an orphaned koala, became an Internet sensation after surviving an accident. His photos rendered by the Australian Animal Hospital received more than 200,000 likes and 70,000 shares on a popular networking site.

Indigenous to Australia, koalas are now a threatened species. According to the Australian Koala Foundation (AKF), there are less than 100,000 koalas remaining in the country. These animals look a little like bears, and are hence popularly, but wrongly, referred to as koala bears. In reality, koalas are marsupials and spend much of their time sleeping on trees. To a certain extent, this animal has helped the economy of Australia by attracting tourists and wildlife enthusiasts from across the world.

The scientific name for the koala is Phascolarctos cinereus. Following are its subspecies:

The Victorian or cinereus victor koala has darker pelage with chocolate-brown highlights on the back and forearms, and light covering in and around the belly portion. This subspecies has noticeably thicker fur than the other two subspecies and is found in parts of Victoria.

The P. c. cinereus is found in New South Wales and is similar to the koalas found in Victoria. These two subspecies are larger and weigh more, at around 26 pounds for males and 17 pounds for females.

The P. cinereus adustus is found in Queensland and is smaller than the other species, with a weight ranging between 14 pounds for males, and 11 pounds for females. They are also gray in color and have thinner fur.

The subspecies are not well documented and are more likely classified locally, based on minute genetic differences that occur as per the habitat of the species. For example, the cold in Victoria explains the thicker pelage (fur) among the koalas there.

The name ‘koala’ comes from the Dharuk Gula language, an Australian Aboriginal language, which is now extinct. In the process of translating to English, the ‘oo’ was mistakenly written as ‘oa’, giving rise to the term ‘koala’ which is incorrectly said to mean ‘doesn’t drink’.

The name of its genus is Phascolarctos where phaskolos means ‘pouch’ and arktos means ‘bear’ in Greek. The use of the scientific name cinereus, means ‘ash-colored’ in Latin.

Even though koalas look like soft, cuddly teddy bears, they aren’t remotely related to bears. They are marsupials, which means they carry their young in pouches. Interestingly, the wombats are the closest living relatives of koalas. Tree bear is another common name for this species, due to the fact that it is found mostly on trees.

Koalas sleep during the day and can sleep for nineteen hours a day.

This animal does not make a nest and instead prefers sleeping openly in the fork of eucalyptus trees.

The koala is equally deft on land and can run as fast as a rabbit.

The fingerprints of koalas are amazingly similar to human beings and enough to cause confusion!

The koala is the only arboreal marsupial without an external tail. However, vestiges of a tail are present in its skeletal structure, which indicates that the animal has evolved over the last 40 million years to climb and live on tress without a tail.

Koalas make grunting and wailing sounds to communicate with one another.

Since the rapid loss of their habitat is threatening the koala population, only a certain number can exist in a given area if they are to remain healthy and well-fed.

These animals are also killed every year by dogs, cats, dingoes, goannas, eagles, and owls. They also die of diseases and accidents. When koalas become upset and worried (stressed) by the loss of their homes, they may get an infection known as ‘Chlamydia’.

In the cold Southern parts of Australia, koalas have long, shaggy fur; whereas in the Northern warmer parts, the fur on this animal is shorter. Koalas used to be hunted for their fur once, a practice that has since been banned by law.

The koala has large round furred ears, a large dark soft leathery nose, and beady eyes. The mouth appears small but can open quite wide.

Male and female koalas can be told apart by the size of a dark scent gland in the center of their chest. The scent patch has a hole in the middle, which is used for marking territory on trees.

To tell female and male koalas apart, you must look at the chest. Males have a larger and darker scent patch as compared to female koalas.

Koalas have two thumbs on both front paws and sharp curved claws on all the digits, which assist them in climbing and give them their extraordinary climbing ability.

The second and third toes on the hind feet are joined together (syndactylous toes) and have rough pads. These toes are used for grooming and climbing. Since it does not have an external tail, this animal makes use of its long and strong limbs for climbing.

The fur of these marsupials acts as a protective layer against high and low temperature, and also against rain as it helps repel water. The color of the fur varies between light gray to brown. Koalas also have some white patches inside the ears, on the chins, chest, neck, forelimbs, etc.

The sense of smell is highly developed in koalas as it helps them in determining the toxicity of eucalyptus leaves. Their high hearing ability also helps them in communicating with other koalas at a distance. Their vision is less developed as compared to their sensory abilities.

Koalas have an average lifespan of 10-14 years and may live up to 20 years in some cases.

Koalas get the water content they need from the eucalyptus leaves on which they feed. Aside from the greater glider and ringtail possum, the koala is the only other mammal with a digestive system that can feed solely on eucalyptus leaves – incidentally, these leaves are highly poisonous if eaten by humans. Even though there are about 600 varieties of eucalyptus trees, koalas feed on the leaves of only around 120 types.

Koalas feed mainly at night and need to eat at least 500 grams of eucalyptus leaves everyday in order to meet their nutritional requirements.

The koala eats by putting the leaves in its mouth at an angle and then chewing with its molars. They store leaves in pouches in their cheeks and feed on them whenever they feel like having a snack.

These animals spend around 1 to 3 hours in feeding and indulging in social behavior. They are mainly nocturnal animals.

The digestive system of a koala bear has the ability to nullify the toxins present in such tree leaves. These toxins are produced by such trees as a defense mechanism against insects. Sometimes, koalas avoid certain eucalyptus trees with higher toxin content. Being picky eaters, they often sniff the leaves before consuming them.

These animals are usually solitary and interact only during breeding season. Koalas breed in summer, and the young are born about a month after mating.

Female koalas reach sexual maturity at the age of two, whereas, males become mature when they are three to four years old.

A koala offspring is known as a ‘joey’. It is born with its eyes and ears shut, and without fur.

Koalas breed once a year and the mating season is generally between December and March. The gestation period is around 25-35 days. Koalas only have one joey per year.

Once the female has given birth, the young joey climbs into the pouch of its mother and remains there for about 22 weeks. At the time of birth, a joey is typically about 19 mm in length and weighs around half a gram.

Inside the pouch, the joey attaches itself to the teats of its mother. The sphincter muscle in the pouch opening of the female koala expands in order to prevent the baby koala from falling out.

A newborn joey can’t regulate its body temperature until it grows fur, and thus, remains in its mother’s pouch for at least seven months. Thereafter, it rides on its mother’s back until it is ready to take care of itself.

The joey is not capable of digesting eucalyptus leaves initially. In addition to milk, the mother’s body provides a substance called ‘pap’ to the baby which allows the mother to pass on the microorganisms which are necessary for the digestion of gum leaves.

A female koala bear gives birth to only 5 to 6 babies in her entire lifespan.

The increase of atmospheric CO2 levels is adversely affecting the quality and nutritional value of eucalyptus leaves. The loss of habitat and nutrition, is making it more and more difficult for koalas to find food. Experts believe that koalas are becoming increasingly vulnerable to malnutrition and starvation. 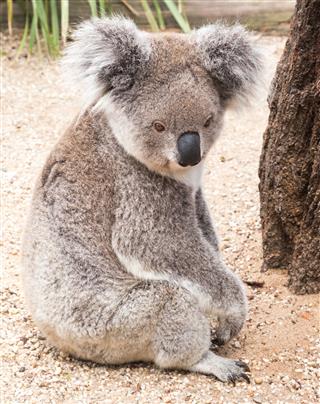 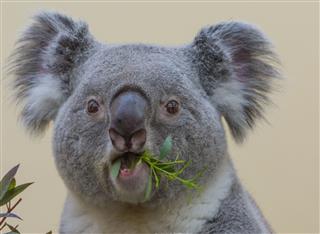 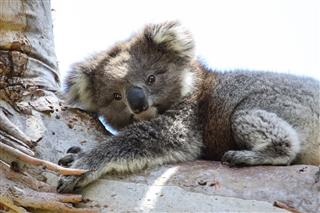