16 Fascinating Facts About Woolly Mammoths That’ll Blow You Away

We were reacquainted with woolly mammoths all thanks to the super-successful animated film series, 'Ice Age'. Let's learn more about these fascinating creatures who became extinct around 4,000 years ago.

You are here: Home / Uncategorized / 16 Fascinating Facts About Woolly Mammoths That’ll Blow You Away

We were reacquainted with woolly mammoths all thanks to the super-successful animated film series, ‘Ice Age’. Let’s learn more about these fascinating creatures who became extinct around 4,000 years ago. 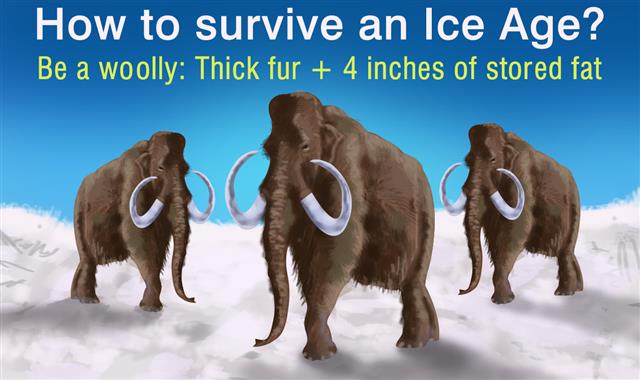 It’s true, you know. The name ‘mammoth’ is a little misleading, as it seems to suggest that these creatures were obscenely huge. When in fact, mammoths are understood to be approximately the same size as present-day Asian elephants.

With the steady melting of permafrost in the northern polar region, several mammoth fossils were found. Scientists are using these fossils to understand these creatures, their habitat, and the reasons contributing to their extinction. The information thus revealed has shed some light not only on the way the mammoths lived, but also what our world was like back in those times.

► Appearance-wise, the woolly mammoth nearly matched an Asian elephant, with a few differences in their features. The mammoth’s skull was narrower in comparison to modern elephants. Also, their ears were smaller and the tail was shorter, both of which were adaptations to extreme cold.

► Woolly mammoths had a full coat of fur consisting of long, coarse exterior hair, measuring close to a meter long, and a short, dense layer underneath.

► The diet of these herbivores comprised about 500 lbs of plants, grass, aquatic shrubs and trees per day. The tip of their trunk had a peculiar protrusion, which was used to pick and eat delicate buds, flowers, and shorter grass blades.

► Mammoths had four huge teeth―two upper and two lower. Throughout their lifetime they grew six sets of teeth, and are known to have died when their last set of teeth lost the ability to grind up the food they ate.

► Besides the thick coating of shaggy hair, the mammoths had a 4-inch layer of fat beneath their skin which provided insulation from the harsh winds.

► The lifespan of mammoths was estimated to be about 60 – 80 years.

► Not much is known about their reproductive cycle, but approximations can be derived from modern-day elephants. Mammoths had a gestation period of 22 months, following which they gave birth to a single calf.

► The tusk of the mammoth was unique, and was used in a variety of tasks―brushing off snow from the ground while searching for food, as a show of strength to deter predators, and to attract a potential mate.

► To scientists, the fossilized tusk of the mammoth can reveal a lot―its age at the time of death, the season in which it died, and its overall health.

► There is a mad rush in the Arctic region to hunt for frozen specimens of mammoths, owing to these ivory treasures. They fetch a decent price in the market, and unlike elephant tusks, these aren’t exactly illegal.

► Predators of mammoths were mostly saber-toothed felines and humans. Humans extensively began hunting mammoths for their meat, bones, and skin. This is regarded as a plausible cause which led to the extinction of the species.

► The extinction of mammoths is mainly attributed to one other cause besides hunting, which is the sudden climate change at the end of the Pleistocene Period. The increasing temperature made it hard for the mammoths to survive, considering their physical attributes were suited to the colder climate.

► The most famous mammoth specimen to have been recovered from the frozen ground is that of a female calf, nicknamed Lyuba. The carcass was discovered in 2007, in an almost-intact state. She was understood to have been about a month old when she died near the Yuribei River, in present-day Russia, and had been buried for almost 40,000 years.

► It was generally assumed that the last woolly mammoths vanished from the Arctic tundra around 8,000 BCE, with the last of the isolated woolly mammoth populations vanishing from Wrangle Island, located in the Arctic Ocean as late as 1700 BCE. 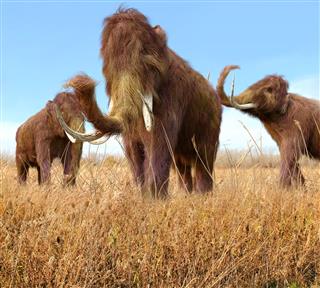 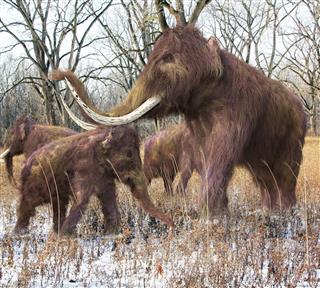