All About the Food and Habitat of the Great White Shark

Great white sharks are the largest predatory fish of the oceans. Dubbed as killing machines, they derive their name from their typical white underbellies.

You are here: Home / Uncategorized / All About the Food and Habitat of the Great White Shark 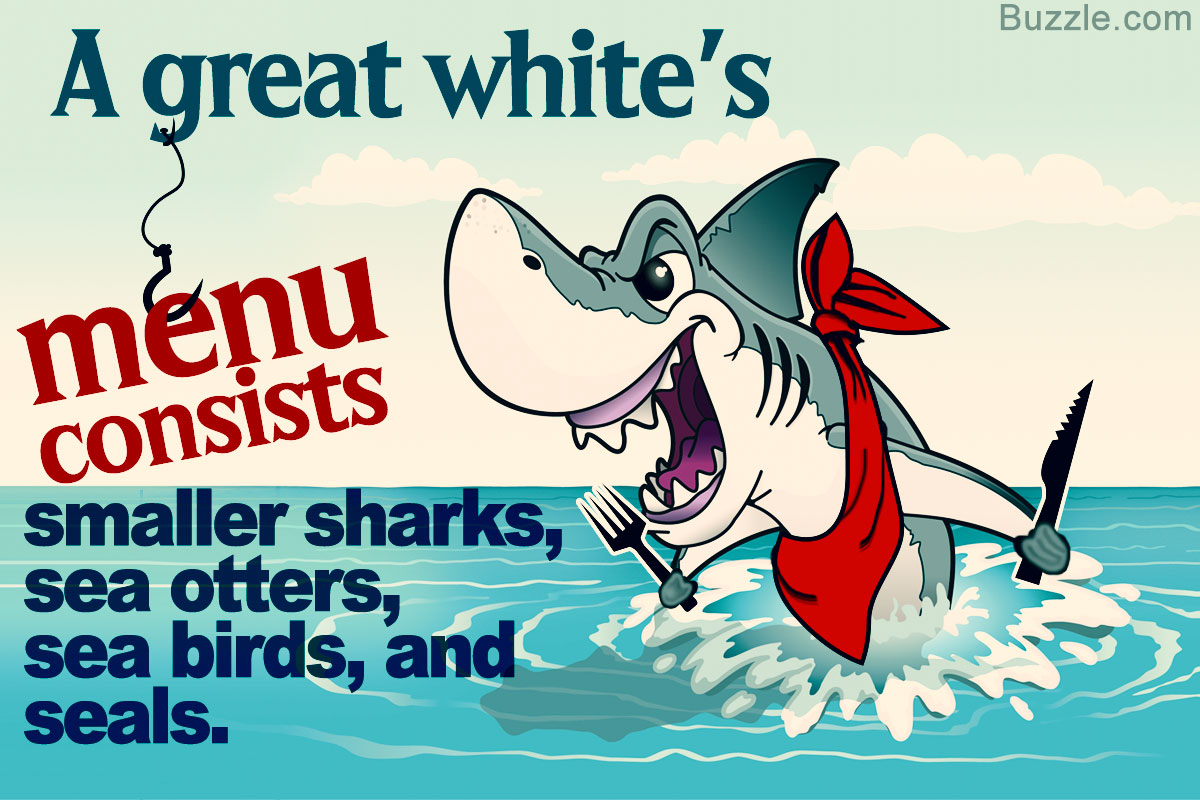 Great white sharks are the largest predatory fish of the oceans. Dubbed as killing machines, they derive their name from their typical white underbellies.

Within their quiet, dark depths, the vast oceans and seas sustain an intriguing world full of diverse life forms. Among all, the most dreaded are the sharks that are known for their violent temperament and fatal attacks. Out of the 100 shark attacks on human beings that are reported every year, about 30% to 50% are attributed to the Great White Sharks. However, most of the attacks are believed to have occurred more out of curiosity rather than out of intent to kill. Being an apex predator (being on top of the food chain) themselves, it has very few predators like the killer whales and larger sharks. 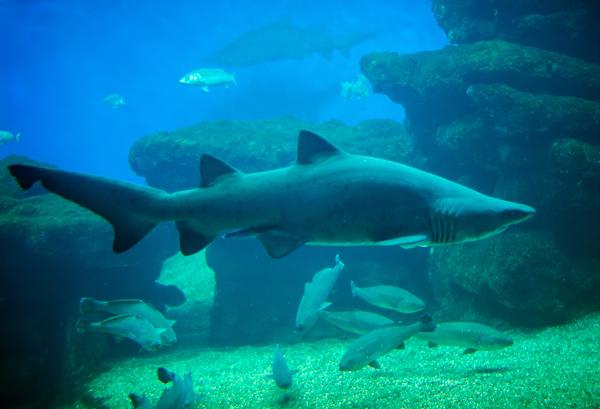 Great Whites travel a lot, even cross the continents and it is impossible to keep them in captivity.

The Great White Sharks are found in the cool temperate waters of the oceans and seas of the world, with greater concentrations off the southern coasts of Australia, South Africa and California. They are also found along the coast of Hawaii, most of South America, Gulf Coast, New Zealand and the Mediterranean Sea. Great Whites are rarely found in cold waters. They are rarely found off the coasts of Alaska and Canada. Sometimes, they are seen in the seas surrounding Scandinavia and Japan as well. They are also found along the eastern coastline of China and southern Russia.

The Great Whites cruise near the surface, near the shore in search of food. They are also found in the deep waters of the seas as far deep as 820 feet (250 meters) and offshore reefs. They are normally seen near the surface or near the bottom of the sea and not in the middle section. If the water near the bank is deep or if the water near the rocky headlands close to shore is deep, Great Whites are likely to be found there. They patrol small coastal islands in search of preys. Seals, sea lions and walruses are abundantly found nearby small islands. Studies show that Great Whites travel a lot. They even cross the continents. It is not possible to keep them in captivity (in aquariums). Studies and previous incidences show that they don’t survive the shock of capture and transport. More research has to be done regarding their food and the type of water and the tanks that can accommodate Great Whites.

Their gray dorsal surface helps them to camouflage themselves in the ocean water while hunting.

Scientifically known as Carcharidon carcharius, Great Whites do not have bones. Instead they have a cartilaginous skeleton unlike true fish. It is one of the largest species of sharks that grow up to a length of 15 feet and can weigh up to 5000 lb. Their gray dorsal surface helps them to camouflage themselves in the ocean water while hunting. However, their ventral surface is white. They have a short, conical snout and long gill slits. They have rows of serrated, razor-sharp teeth. When they lose teeth from the front row, those from the back rows come forward to take their place. This mechanism along with their keen sense of smell and impressive biting force makes them one of the most skilled hunters of the sea. 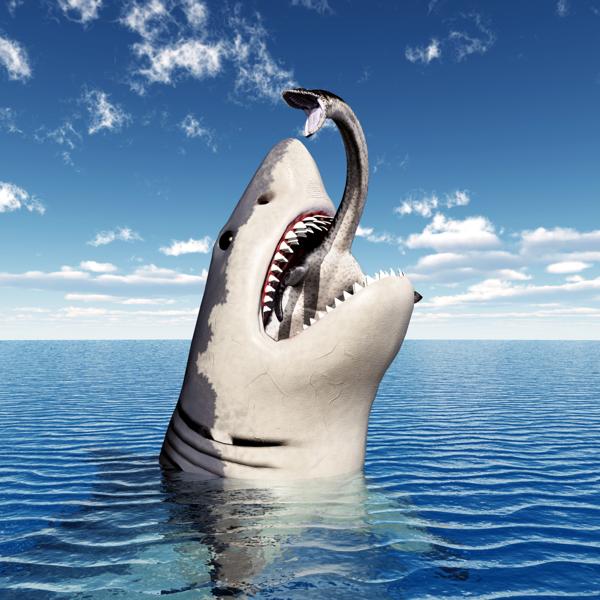 According to one hypothesis, attacks by these sharks on humans is due to mistaken identity.

Great white Sharks are carnivores creatures that hunt during the day. These large fish primarily feed on dolphins, porpoises, seals, sea lions, whales carcasses, sea turtles, and other fish like tuna, rays and smaller sharks. They have about 3,000 triangular teeth. They prefer prey that are a good source of energy. They usually bite their prospective prey to assess their fat content. If the animal does not have enough fats that would be a rich source of energy, the shark does not eat it. In this regard, human beings do not qualify as a favorite prey for these massive hunters. One hypothesis that tries to explain the high number of attacks by these sharks on human beings is that of mistaken identity. It is believed that these predators prefer seal shaped preys to animals of any other shapes. Surfers and divers who have silhouettes similar to seals while swimming are often mistaken by the Great Sharks as their favorite prey, and hence are attacked. Great whites are very curious. First, they spy and examine the isolated and vulnerable objects that come across their ways. Once, they’re sure that the object is edible, they make their approach. The first bite is so ferocious and lethal that the pinniped (aquatic carnivorous mammal with limbs modified as flippers, for example, a seal) bleeds to death. The shark then comes back and enjoys the feast. It eats up about 20 to 30 pounds of flesh with one chomp. Being warm-blooded fish, Great Whites need to eat more. Sometimes, they reject the prey after biting. 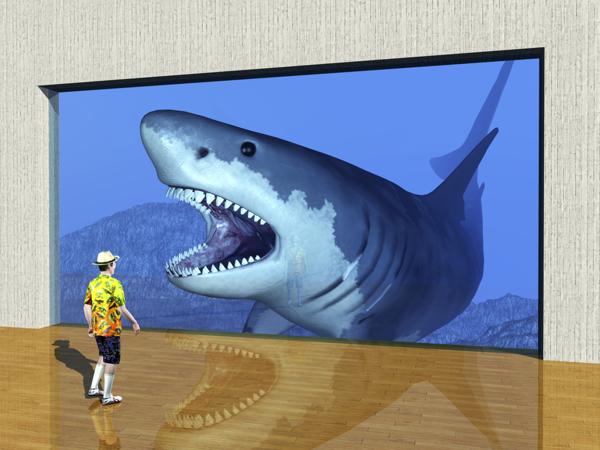 In 1991, an act was passed in South Africa that banned killing of these sharks, with heavy penalties

Trophy fishing for Great White Sharks was quite popular for decades, particularly during the 1920s. These massive predators have been hunted by fishermen not only for personal glory but also to combat the shark menace specially off the coast of USA, South Africa and Australia. These sharks have also been killed for their jaws and teeth. Their flesh is eaten, skin is used to make leather goods, liver is used to make oil and fins are used as an ingredient for the popular shark fin soup. Despite lack of conclusive data, hunting and fishing of the Great Whites is believed to have played a major role in the decline of their population. Besides, these are slow-growing fish with low productivity, which further increases their vulnerability.

South Africa is one of the first countries to have started conservation programs for these fish that are in the list of endangered animals. In 1991, an act was passed in South Africa that banned killing of these sharks, with heavy penalties in place for those who violated the act. In 1994, the Great White Sharks were given protected status in California and Australia. New Zealand followed suit in 2007. According to the International Union for Conservation of Nature and Natural Resources, Great Whites are listed as vulnerable because they are rarely seen. The exact population of this species is not known.

The Great Whites are an important part of the marine ecosystem. These sharks clean the marine world of sick, dying and dead animals, and also feed on larger animals like whales and seals that have fewer predators. Conserving this species is important to maintain the delicate balance of life in the marine world.