Although Barred Rock roosters and hens look similar, there are a lot many distinctions. We'll discuss the major differences between the male and female Barred Rocks.

You are here: Home / Uncategorized / How to Tell the Difference Between a Barred Rock Rooster and a Hen 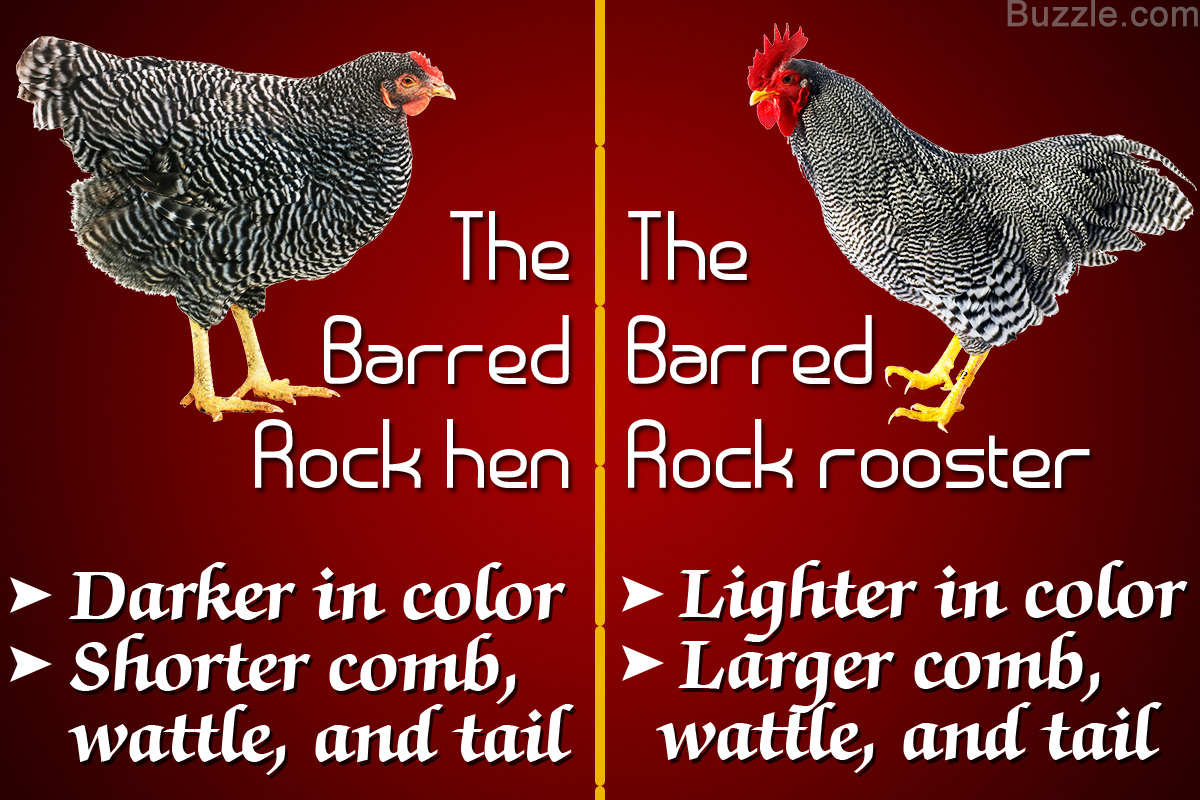 Although Barred Rock roosters and hens look similar, there are a lot many distinctions. We’ll discuss the major differences between the male and female Barred Rocks.

Many times, in all-female flocks or in flocks in which the ratio of hens to roosters is greater than 10:1, one hen may take on male characteristics and may declare herself as the ‘protector’ of the rest of the flock. She may come out with a half-crow, and she may stop laying. She may even develop spurs on her legs.

The Plymouth Rock chicken was developed from crosses of Dominiques, Black Javas, Cochins, and perhaps Malays and Dorkings, in the 1870s. The first Plymouths were barred. Other Plymouth varieties like buff, silver-penciled, black, etc., were developed later. The Plymouth Rock is often referred to as Barred Rock or just Rock, because of their typical color.

At first glance, it is difficult to tell the difference between Barred Rock rooster and hen. The following table describes the distinguishing features of male and female Barred Rocks. 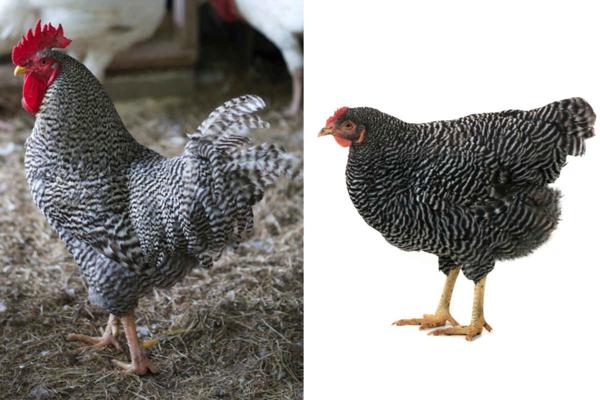 ✦ Although hens and roosters have black and white bars all over their bodies, roosters are lighter in color.

✦ Hens are darker in color.

✦ The width of the dark and light bars is almost the same. They are placed in parallel rows. Both males and females have straight uniform bars. However, males appear gray and white (not black and white like the females). They look more white than black.

✦ The barring is sharper (sharply contrasting) than that of a male. The Barred Rock hens are slightly darker in color than the roosters, as they carry only one chromosome for the barring, and the males carry two. The hens appear black and white (look more black than white).

✦ Roosters are larger in size than hens. They have relatively larger wattles and combs. They carry their heads high up. The overall carriage of a male is more upright than a female. The comb is single and dark red.

✦ Hens are smaller than the roosters. They have relatively smaller wattles and combs. However, the abdomen of a hen is deeper and fuller than a rooster. The comb is single and light red.

✦ Hens have smaller tails. The tails are so short that they seem to be tailless. On a hen, the saddle/hackle feathers will be round ended & shorter.

✦ Roosters usually have spurs on their legs.

✦ Hens usually do not have spurs on legs. However, this is not a 100% sure way of determining the gender of a Barred Rock.

✦ As the cockerels mature they become more dominating, but young ones may act like hens. Roosters are calm and friendly, but at times, they can be quite aggressive as compared to hens.

✦ Hens are calm and docile. They are very good egg layers. They are good mothers too. They can go broody, if the environment is favorable.

✦ The white spot on the head of a male will be scattered, and irregular shaped. The legs of a male chick can be thicker than that of a female chick. The feathers on the head will stand upright and curve towards the back. Around five to six weeks, cockerels will start getting larger than hens, and start developing a red colored comb. Cockerels will usually develop hackle feathers around two to three months of age. Males, at an age of 4-5 months, may attempt to crow. After about six – nine months, the combs and wattles of cockerels will look larger than those of pullets. They would develop spurs on legs too.

✦ A female chick usually has a more distinctive white dot on its head. The legs of a female chick can be larger and more yellow than that of a male. The female head feathers usually form in a rounded feather puff. Pullets usually develop tail and wing feathers before cockerels. Hens usually do not crow.

✦ They are grown for meat.

✦ They are grown for eggs as well as meat.

Sexing baby chicks is very difficult. Professional sexing experts try to determine the sex of a chick by examining the chick’s vent. But a common untrained person should not follow this method. Most features described in the table may take weeks to develop. Even experienced sexing experts cannot be 100% accurate while sexing the chicks. It is relatively easier to determine the sex of grown-up chickens.

Over years, the Barred Rock has gained popularity all over the world. However, most hatchery grade chickens have crosses that mess up the sex link properties. Certain characteristic properties that help determine the sex of a chicken may vary according to the age and genetic line of chickens.