Information about the Eastern Hognose Snake with Pictures

The Eastern Hognose snake, named that way due to its upturned snout, is commonly found in parts of North America. Here is an information about this species including its habitat, diet, size, and behavior.

You are here: Home / Uncategorized / Information about the Eastern Hognose Snake with Pictures

The Eastern Hognose snake, named that way due to its upturned snout, is commonly found in parts of North America. Here is an information about this species including its habitat, diet, size, and behavior.

This snake has a seemingly huge list of common names summing up to more than 50. Some of the most popular ones are, Spreading Adder, Bastard Rattlesnake, Blowing Snake, Buckwheat-nose Snake, Calico Snake, Chunk Head, and many more.

The Eastern Hognose snake occurs in regions of Southern New Hampshire, Northern Florida, Eastern-Central Minnesota, West-Eastern Texas, and West Kansas. Categorized under medium-sized snakes, this species is abundant and has a large population, hence falls under the ‘Least Concern’ (LC) category of the IUCN list of threatened species.

Take a look at some brief specs of the snake given here, and an in-depth description about the peculiarities of this snake.

As said previously, the snake is categorized into medium-sized snakes, and grows to a maximum of 28 inches in length. The longest one recorded till date spans to 45.5 inches. The snake has an upturned snout similar to that of a hog, which it uses to dig in sandy soils.

Colors vary largely as per the different regions it’s found in. Some common colors are black, brown, gray, orange, green, and red; however some possess more than one color combining two or more of the listed colors.

There is also a lot of variation in the patterns, some have blotches, some are checkered or striped, and some are completely patternless. They have 25 rows of keeled dorsal scales, and their undersides are either dull gray, cream, or yellowish.

There is a lot of variation in the patterns, like blotches, checkered or striped, and some are patternless. They have 25 rows of keeled dorsal scales, their undersides are either dull gray, cream, or yellowish.

These snakes are very shy and are mostly active during the day. They are spotted more during the spring, as this is the time when they reproduce. They rarely bite and are mildly-venomous, however, their venom does not pose any threat to humans.

These snakes like to stay exposed than covered under shelter. When the snake is threatened, it displays a very peculiar but interesting defense mechanism; it flattens its neck and raises its head above the ground. It will also hiss constantly and strike in extreme cases, but won’t bite. 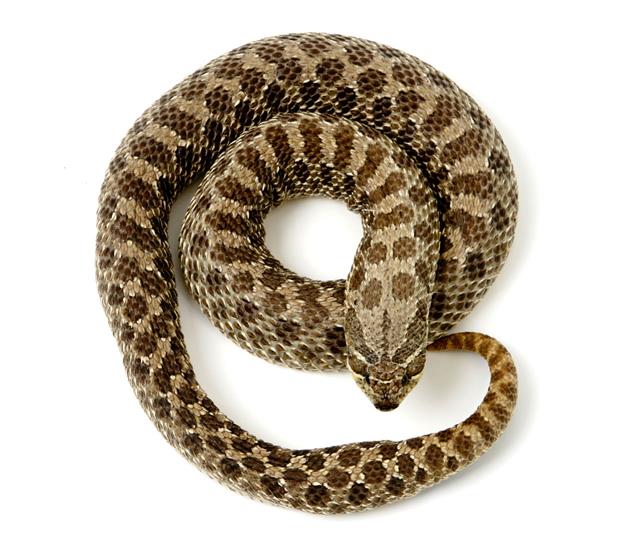 In some cases, the snake in defense is even seen to roll on its back and play dead to such an extent that, it would emit a foul-smelling odor from its cloaca and drop its tongue out.

The Eastern Hognose snake is a burrowing type of snake, and prefers soft loamy or sandy soil (well-drained) which it can dig and make a place to live in. These snakes mostly occur in fields, forests, beaches, and shrublands. Although burrowing, it prefers to bask and stay exposed. They use their burrows to lay eggs, especially in the spring or late summer.

For food, these snakes hunt amphibians and their favorite prey is toads. They are resistant to the poison produced by the toads; these snakes are rear-fanged and inject a mild venom meant for amphibians into its prey, this venom is responsible to neutralize the poison secreted by toads and hence doesn’t affect the snake.

Toads also have the tendency to inflate in self-defense, but the snake’s sharp fangs deflate them making it easier for the snake to swallow. These snakes also eat frogs, newts, salamanders, and rodents.

During spring or late summer, the female lays about 8-20 eggs in their burrows and isolate it. Neither do they look after their eggs, nor do they take care of the hatchlings. The eggs hatch after about 60 days, and the hatchlings are about 6-8 inches long.

An Eastern Hognose snake lives approximately for 10-12 years and sheds its skin periodically to grow.