Giant clams, the huge and brightly colored mollusks, are a culinary delicacy in many countries of the world. Here are some interesting facts about these sessile creatures.

You are here: Home / Uncategorized / These Interesting Facts About the Giant Clam Will Make You Go WOW 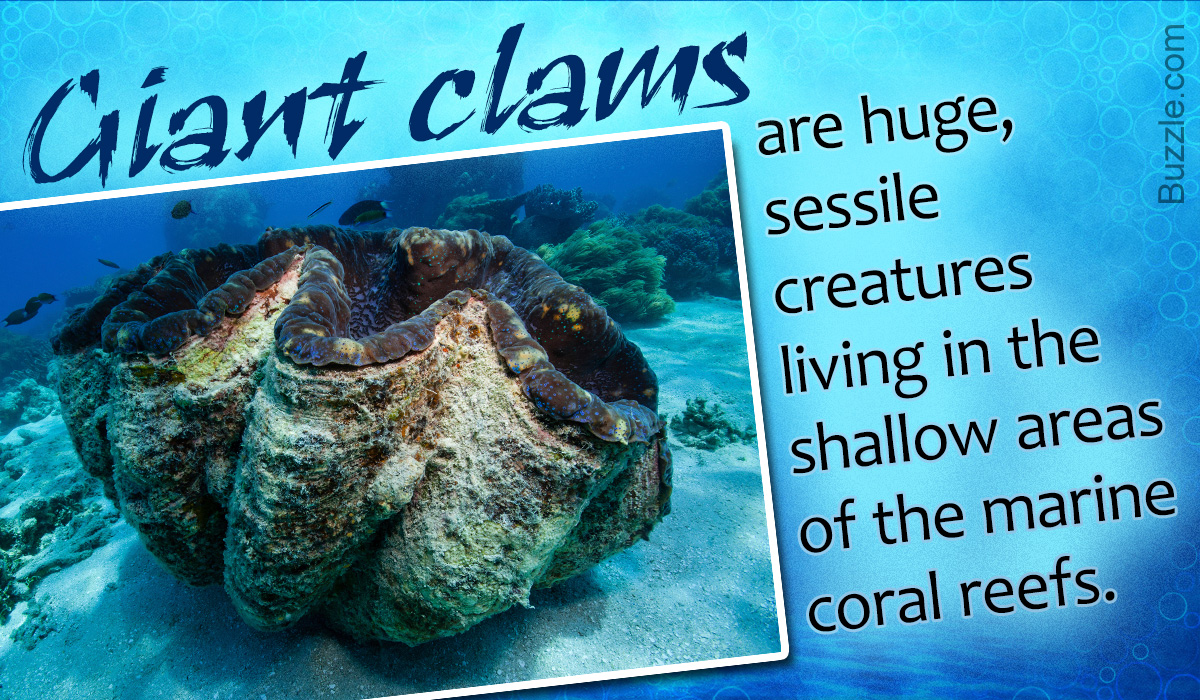 Giant clams, the huge and brightly colored mollusks, are a culinary delicacy in many countries of the world. Here are some interesting facts about these sessile creatures.

According to a research by American and Italian scientists, the shells of giant clams contain high amounts of zinc, which aids in the production of testosterone.

The giant clam, Tridacna gigas, is one of the numerous clam species that exist in the coral reefs of the South Pacific and Indian oceans. As the name suggests, these are huge clams, so much so that they are regarded as the largest extant species of bivalve molluscs. Owing to the fact that they occur in marine environment, the giant clams belong to the family Cardioidea, to which all the other saltwater clams belong. These creatures were first documented by an Italian explorer, as early as 1521. Since then, the giant clams have been studied in great detail.

The largest known specimen of the giant clam, till date, was found in 1817, off the north-western coast of Sumatra. It was 4.49 ft. long, and its shells weighed 510 lbs. In 1956, another giant clam that was about 3.77 ft. long was found in Japan, with its shells weighing about 730 lbs. These figures shed light on how big and heavy the mollusk can actually be.

➦ Giant clams are huge, sessile creatures, that inhabit the shallow areas of the marine coral reefs. Sessility refers to the inability of certain animals to move around.

➦ Owing to its sessile nature, the moment the giant clam chooses a spot as its ‘home’, it fastens itself to the same, and then cannot go elsewhere for the rest of its life.

➦ Adult giant clams cannot close their shells completely. This makes them the only species of clams unable to do so.

➦ Through the gaps in their partly closed shells, one can see their retracted mantle. The shell of a giant clam bears four or five vertical folds.

➦ With the help of the zooxanthellae, the unicellular algae which grow within their shell valves, the giant clam shells can produce huge amounts of calcium carbonate.

➦ The giant clams look spectacular, not just because of their imposing size, but also due to the multitude of bright colors of their mantles.

➦ The zooxanthellae are also responsible for producing these bright and attractive color patterns, which are unique to each clam.

➦ As mentioned above, giants clams are marine animals, found in shallow coral reefs. They prefer a warm, marine environment.

➦ In the Philippines, where giants clams are also found, they are known as the taklobo, and are a major delicacy.

➦ They are also found in the coral reefs of the Malaysian Borneo, in the South China Sea.

➦ Tridacna gigas is generally found fastened to the flat coral sand, at the depth of around 66 feet.

➦ The average lifespan of a giant clam in its natural habitat is more than 100 years.

➦ Giant clams are omnivorous in nature, meaning that they feed on both plants and animals.

➦ The algae that grow within their mantle tissue are their main source of food. The giant clams absorb sugars and proteins, which these algae produce as they photosynthesize. The nutrition that they get from these algae enable them to acquire such enormous sizes.

➦ Apart from this, like many other marine organisms, giant clams are also known to filter feed. Through filter feeding, they eat small food particles floating in water, and even small animals present in their surroundings.

➦ Owing to their immense size and their sessility, giant clams are also preyed upon by a number of predators which are, more often than not, much smaller than them.

➦ By nature, giant clams are hermaphrodites. They possess the reproductive organs of both the sexes.

➦ Despite this, they cannot reproduce on their own. On the contrary, they release sperms and eggs into the water.

➦ When the eggs come in contact with the sperms of another giant clam, they get fertilized. The fertilized eggs float in water for around 12 hours before they hatch.

➦ A single giant clam can release over 500 million eggs at one time.

➦ The larvae which hatch out of the eggs are planktonic in nature, unlike the sessile adult. This means that the larvae float on water, but cannot swim against the current.

➦ Within a few days, the larvae start producing shells around themselves. Their growth is really fast, and soon they fasten themselves to the floor of the reef.

➦ In Japan, France, South East Asia, and a number of Pacific islands, the giant clam is considered a culinary delicacy.

➦ The adductor muscle of the giant clam is regarded as its tastiest body part, and is a rather expensive food item.

➦ In China, it is believed that the adductor muscle of the giant clam can act as an aphrodisiac. Hence, it is sold at a high price.

➦ Moreover, the shells of the giant clam have a huge market as decorative objects, and they are sold illegally on the black market.

➦ Owing to the clam’s sessile nature, it can be easily exploited by humans. Not surprisingly, their population has been dwindling at an alarming rate.

According to the IUCN Red List of Threatened Species, the giant clam falls in the list of vulnerable animals. This means that, though the giant clam is not endangered as of today, it is likely to become one in the near future. One of the major reasons for this is the overexploitation of these mollusks by humans. However, although their population in the wild has been declining, efforts are being taken to conserve the species by breeding them artificially.