The Hercules beetle, also known as dynastes hercules, is one of the largest beetles in the world. AnimalSake has compiled some interesting facts about this insect.

You are here: Home / Uncategorized / Interesting Facts About the Hercules Beetle You Don’t Want to Miss 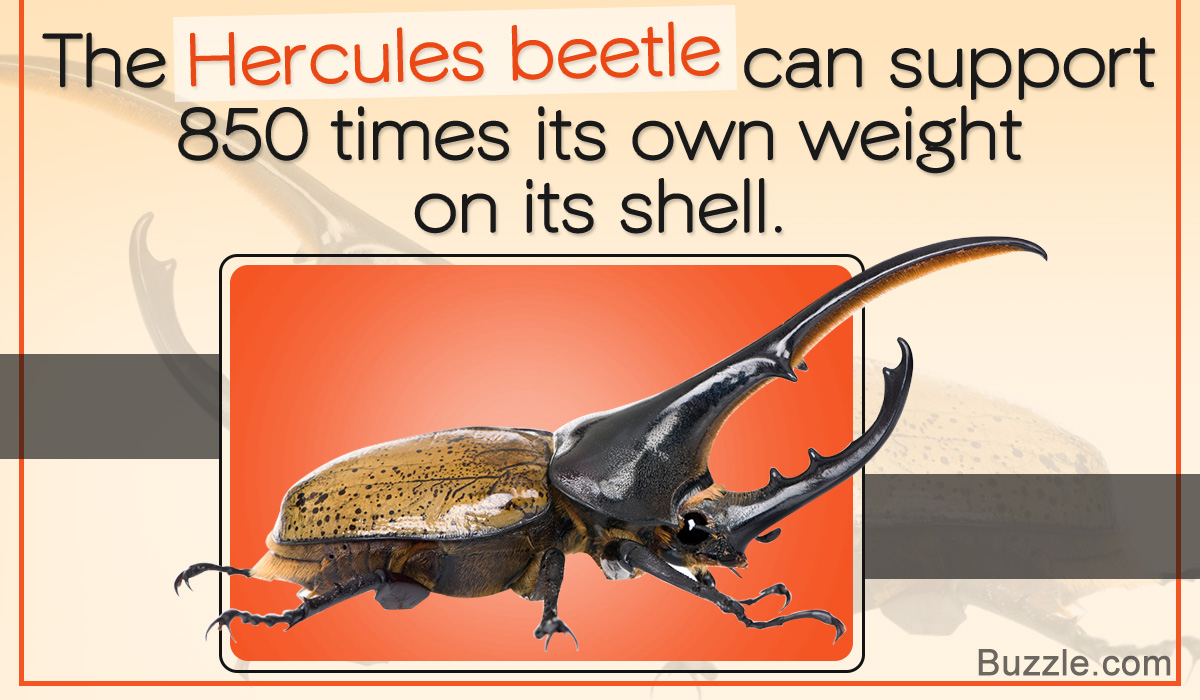 The Hercules beetle, also known as dynastes hercules, is one of the largest beetles in the world. AnimalSake has compiled some interesting facts about this insect.

The Hercules beetle is one of the strongest creatures on Earth. It is the largest beetle of the Dynastes genus.

Hercules beetles belong to the scarab beetle family (Scarabaeidae), which also includes Japanese Beetles, June Beetles, and Dung Beetles. They can be found in the tropical rainforests of Central and South America. They belong to a subclass of Rhinoceros beetles, and have about 13 known species. These beetles are known to possess enormous strength, and therefore get the name ‘Hercules’. Here are some interesting facts about Hercules beetles.

▸ Despite their large size and relatively more weight, these beetles can fly.

▸ The exoskeleton of the Hercules beetle can change its color from green to black with increasing humidity.

▸ Adult males have two large horns (pincers) protruding from their thorax and head. The size of the pincers depends upon how much nutrition the grub received while it was growing. Sometimes, they can grow longer than the male’s body.

▸ The beetle can be easily identified owing to its large body. Adult males can measure 5.9 to 6.7 inches (150 to 170 millimeters) in length. The females, though longer than the males, appear shorter because they lack horns.

The lifespan of a Hercules beetle is about 18-20 months. It undergoes complete metamorphosis with the following stages:

Egg stage: This is the initial stage of the life cycle which lasts for about a month. After this stage is over, the egg hatches into a larva.

Pupal stage: This stage lasts for 2-3 weeks, during which, a shell-like exoskeleton is formed over the body. Later, the pupa transforms into a fully grown adult beetle.

Adult stage: This is the final stage of the life cycle which lasts for about 3-4 months. The adult beetles emerge from the soil during spring time, and then spend the rest of their lives above the ground searching for a mate.

▸ They make a hissing or squeaking sound when disturbed or picked up.

▸ They mate during the rainy season.

▸ During mating time, the males have fierce fights with each other using the pincers to pick up and thrash the opponent onto the ground. The winner gets to mate with the female.

▸ The females attract the males by releasing pheromones.

▸ After mating, the females burrow into the ground to lay eggs. They can lay up to 100 eggs at a time.

▸ Hercules Beetles are mainly found in the tropical rainforests of Central and South America.

▸ They can be found in large numbers in the jungles of Costa Rica, Brazil, and Bolivia.

▸ Some are also found in the southernmost portion of Mexico. They are even seen in parts of the Caribbean, namely Guadeloupe and the Dominican Republic.

▸ Most commonly, they are found in tree stumps that they have entered from the soil below.

▸ The Hercules beetles live underground as larvae for a major portion of their lives. These larvae feed on decomposing wood.

▸ When fully mature, the adult beetle comes out on the surface of the soil and goes in search of food.

▸ Adults, unlike the larvae, consume both rotting and mellow fruits. They sometimes eat tree sap, tiny bugs, and plants too.

At present, the Hercules beetle is enlisted as an endangered species. They have started deprecating in numbers due to threats from:

▸ Since the eggs and larvae remain underground, they become an easy prey for soil-burrowing animals, mites, and arthropods.

▸ The adult beetles are hunted by bats, birds, rats, and reptiles.

▸ Deforestation and pollution (both air and water) has affected much of the Hercules beetle’s natural habitat.

▸ These beetles are consumed by some people who believe in the superstition that eating the horns of male beetles makes one stronger.

Hercules beetles are harmless though they look dangerous owing to their size and horns. However, if you try to pick it up, its sharp claws might hurt you. 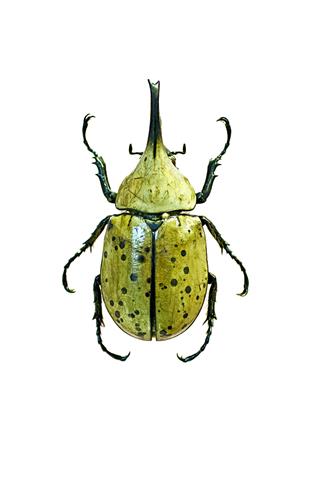 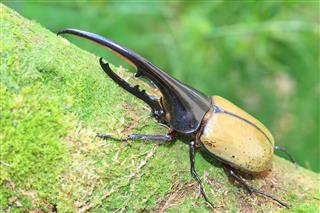