Wondrous Facts About the Maned Wolf You Probably Never Knew

Unlike other wolves, maned wolves do not live in packs and they do not harass human beings. AnimalSake presents interesting facts about these wolves and explains the need to protect the habitat of these 'near-threatened' species.

You are here: Home / Uncategorized / Wondrous Facts About the Maned Wolf You Probably Never Knew 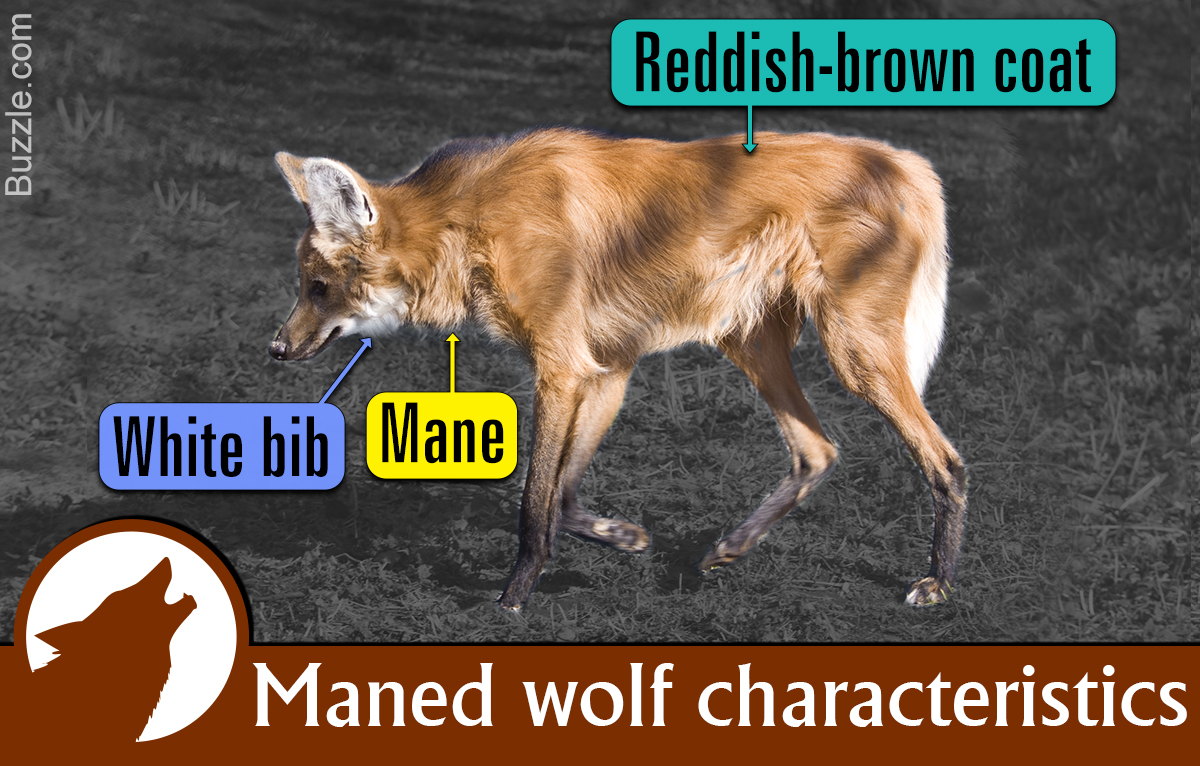 Unlike other wolves, maned wolves do not live in packs and they do not harass human beings. AnimalSake presents interesting facts about these wolves and explains the need to protect the habitat of these ‘near-threatened’ species.

As the name suggests, the maned wolf has black-brown mane on its neck that stands erect when provoked, or when it perceives danger, or when it exhibits aggressiveness. The wolf looks like a red fox, but it belongs to a different genus ‘Chrysocyon‘ (meaning ‘golden dog’). It is the only species in this genus. The International Union for Conservation of Nature (IUCN) lists maned wolf as ‘near threatened’, while it is considered ‘vulnerable’ by IBAMA, Brazil’s federal environment protection agency.

Maned wolf, the spectacular species, is not related to any other living canid. It is neither like a wolf nor like a fox. It does not have the elliptical pupils that foxes have. It cannot be labeled as a coyote, dog, or jackal. It is just a distinct and unique canid. The bush dog (Speothos venaticus) can be assumed as its closest living relative. 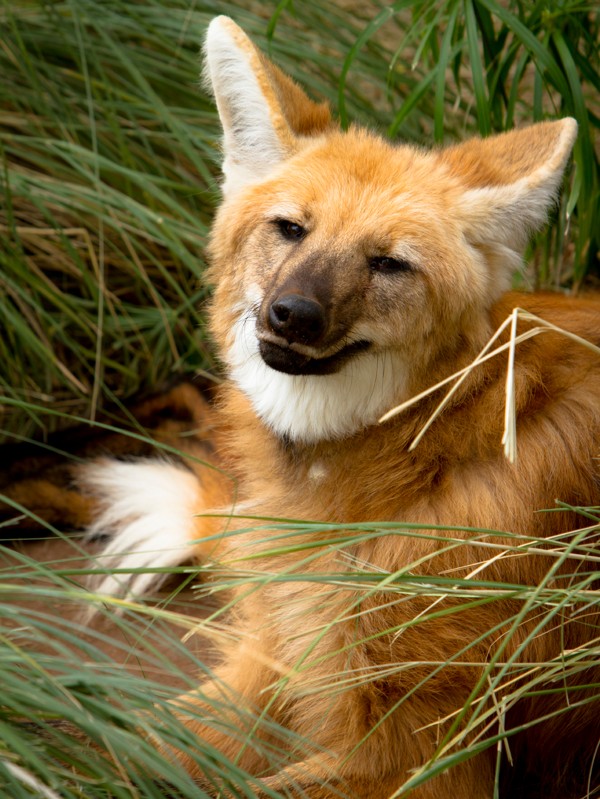 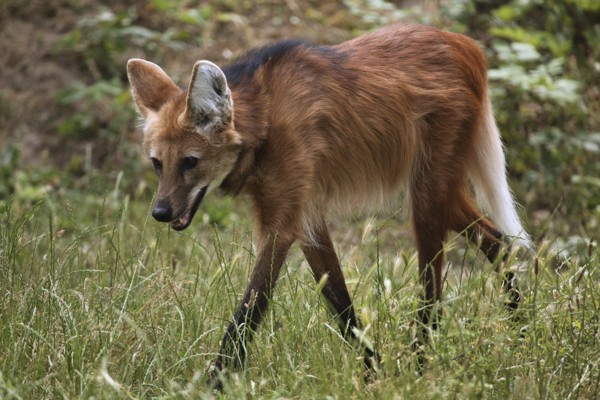 Maned wolves have a long reddish brown or golden orange coat. Long reddish-brown fur covers the neck, back, and chest of the wolf, giving it the appearance of a mane. The color of the anterior part of the erectile mane is black. They have large, long (7 inches), and erect ears. Typically, the throat, chin, and tip of the tail are white, while the long, slender legs are dark brown or black. They have black pelage on their legs, tail, feet, back, and muzzle. The muzzle is long and pointed.

A maned wolf looks like a red fox (Vulpes vulpes). A white ‘bib’ beneath the throat is a characteristic feature of these wolves. The teeth reflect food habits of the animal. As maned wolves do not kill or eat large prey, they have short upper carnassial teeth. Moreover, their upper incisors are relatively weak. They have long and slender canines.

Where does the Maned Wolf Live

This wolf is mainly found in Central and Southeastern Brazil, Paraguay, eastern Bolivia, north of the Andes, far South-eastern Peru, and Northern Argentina.

The maned wolf is found in open forest, dry shrub forest, swampy areas, savanna, forest-edge habitat, marshland, and river areas. It can be seen in open as well as semi-open habitats.

Maned wolves are omnivorous. They eat small mammals (especially rodents and rabbits), insects, reptiles, fish, frogs, birds, and bird eggs. About 50% of their diet consists of fruits like bananas and other vegetation. They even eat tubers, tomato-like fruit (wolf apple), lobeira fruit (Solanum lycocarpum), and sugarcane.

This wolf is particularly prone to kidney infection. The giant kidney worm (‘Dioctophyma renale‘, a parasitic roundworm) that affects its kidney function can bring about its death. Lobeira fruit acts as a medicine against this infection.

Other types of wolves live in cooperative breeding packs, but maned wolves are solitary by nature. They are monogamous. Both male and female live solitary lives, but they share their territories (typically between 25 to 50 square kilometers). They come together only during the breeding season.

Little is known about the life span and reproductive patterns of wild maned wolves. Those in captivity mate between October and February in the Northern Hemisphere, and between August and October in South America. Every year, the female gives birth to a litter of 2-6 pups after a gestation period of about two months.

The newly born pups are black, but later, they gain their reddish-orange coloring. Newly born babies weigh 340 to 430 grams (15-16 oz), but they grow fast. They start eating regurgitated food by week four. Captive males are seen grooming and defending pups, as well as feeding them by regurgitation. Within one year, the pups reach sexual maturity and look like fully grown adults.

As these wolves eat fruits and vegetation, they help spread plant seeds over an extensive territory. Their stools on the nests of leafcutter ants act as the nutritional substrate for the ant’s fungal cultivars. Later, the ants throw away the seeds outside their nests. This naturally helps increases the rate of the seeds dispersal.

Maned wolves are nocturnal. They hunt mainly at night or during dusk/dawn hours. During day time, they stay hidden in thick vegetation. They petrol at night and use their urine to mark hunting paths, to communicate or to mark the places where they have buried prey. The urine has a distinctive smell, somewhat like hop flowers or cannabis.

This distinctive odor has earned it the nickname ‘skunk wolf.’ They move their ears and pay attention to a sound made by a prey present in tall grass nearby. They pounce to catch it.

By tapping the ground with a front foot, they try to flush out the prey. These wolves are shy and timid. They run away when alarmed. They do not pose a direct threat to humans.

Although maned wolves have no natural enemies, only a few thousands are left now. Farmers often kill them as they believe that these wolves kill their poultry and livestock. But these wolves cannot catch or eat large prey. In some areas, they are killed for their organs that are sold for medicinal use.

Many people believe that certain organs of these wolves carry magical healing properties. Some of the wolves die because of diseases. Sometimes, they are attacked by feral domestic dogs. But the main threat to maned wolves is loss of habitat by encroaching human populations. They need wide, uninterrupted territories. These days, grasslands are getting converted into agricultural land. Drastic reduction of habitat has seriously reduced the population of maned wolves.

It is our duty to save such rare and little-known endangered species. By adopting a maned wolf pack, we can contribute to the survival of this rare and wonderful species of wolves.