Zebras are close relatives of horses and donkeys and owe their popularity to their unique black and white stripes. Read on to know more about some interesting facts about zebras...

You are here: Home / Uncategorized / Interesting Facts about Zebras 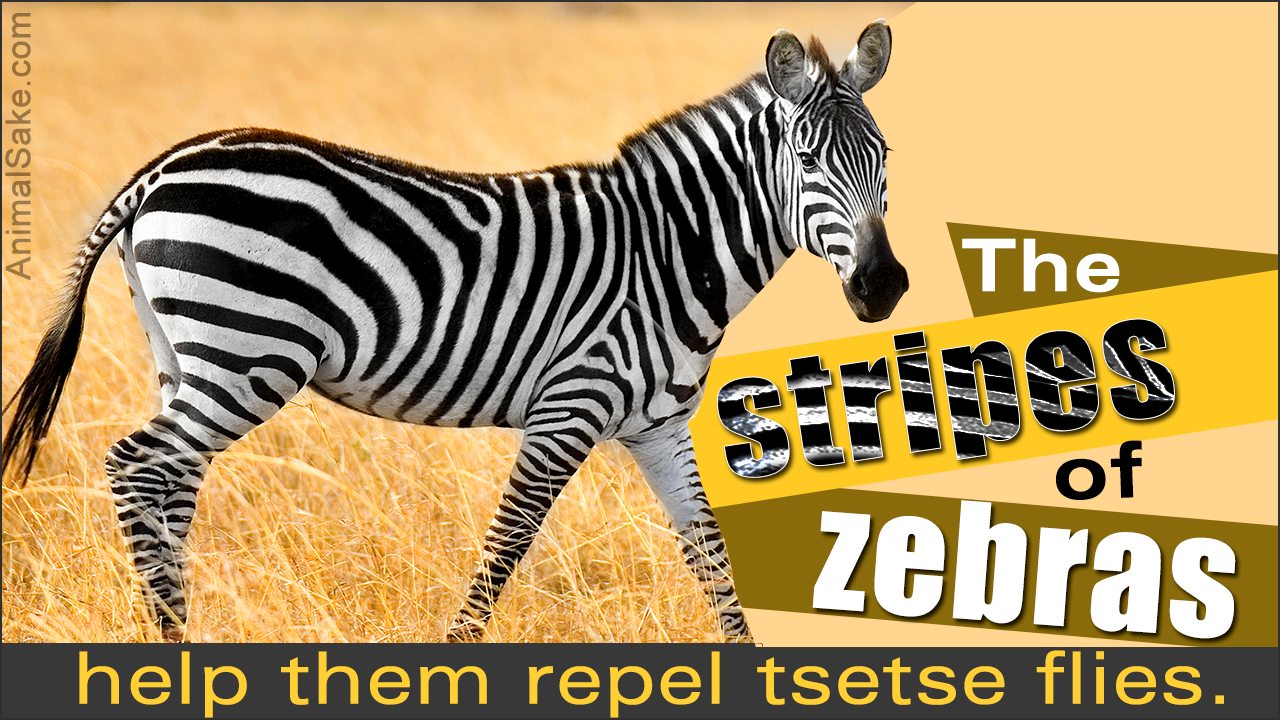 Zebras are close relatives of horses and donkeys and owe their popularity to their unique black and white stripes. Read on to know more about some interesting facts about zebras… 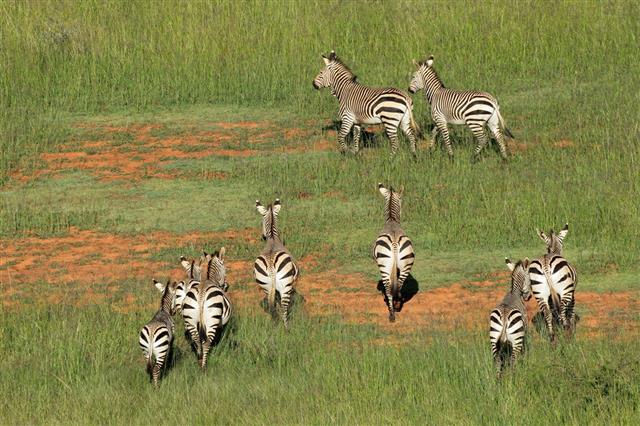 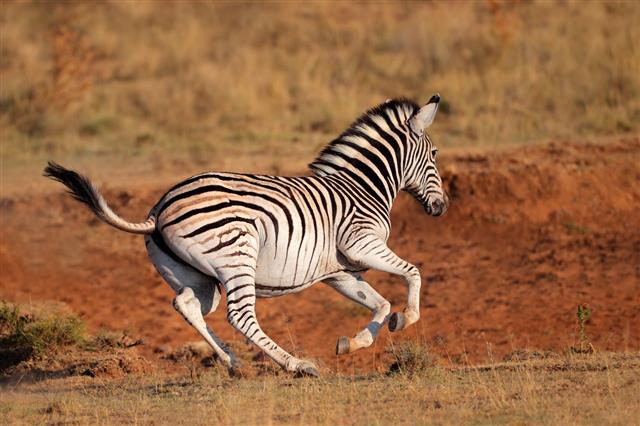 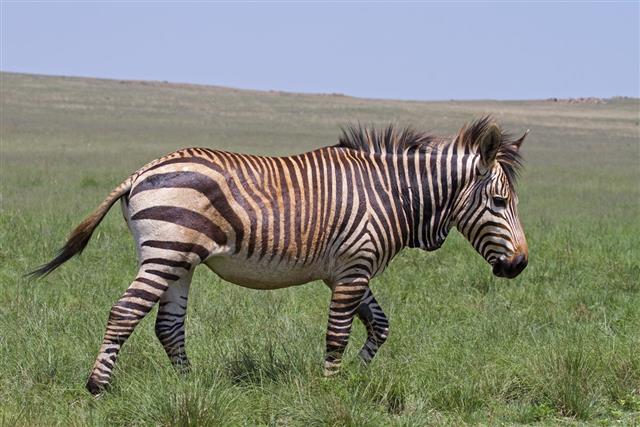 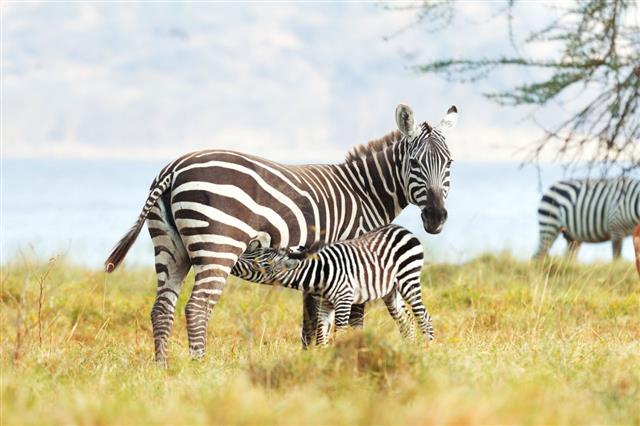 Each zebra has a unique stripe pattern. It has been suggested that these stripes serve the purpose of individual animal identification. This feature helps them in repelling insects and reducing body temperature.


Most of us are familiar with ‘zebra crossing’, a pedestrian crossing that is identified with its alternate black and white stripes on roads. This pedestrian crossing is so named after the black and white stripes on zebras. In fact, the most fascinating and distinguishing feature of a zebra is its stripes. It is this physical feature that makes them attractive and recognizable. There are various theories about the purpose of these stripes. According to a new study, parasitic flies are averse to animals with stripes. So, the stripes in zebras help them repel tsetse flies.

If you want to know more about these amazing animals, continue reading this article that will provide you with some interesting zebra facts.

The most commonly found zebras in the world, plains zebras have shorter legs, as compared to the other two species. Males are slightly larger than the females and most of them have both their back and belly covered with stripes (some may have white bellies too). Some of them have shadow stripes (lines of lighter shades, like yellowish brown) in between the black and white stripes. The stripes are found to be vertical till the hindquarters of their body, where they get horizontal and wider. Plains zebras are found in large groups (called herds) that contain a stallion (male) with mares (females) and young ones that are referred to as foals. These zebra herds are commonly seen with other animals like wildebeests and antelopes. Take a look at the images given above and try to identify the features of plains zebras.

Grevy’s Zebra is named after the French President Jules Grévy, as he was the first person to receive a specimen of the animal in 1882, from the emperor of Abyssinia (Ethiopia). They are compared to donkeys in looks. They have larger heads, broad necks, brown muzzles, large ears and erect manes. Grevy’s zebras have certain distinguishing features like narrow stripes that get slightly wider at the neck. The stripes on the legs are well-defined and clear. On their rump, they have a black stripe that starts from the base of the mane and extends to the base of the tail. Unlike the other two zebra species, Grevy’s zebras are not usually found in groups. They are solitary in nature, except the mothers that roam around with their young ones.

The body structure of zebras is similar to that of horses and donkeys. Normally, the height of an average adult zebra ranges from four to five feet and the body length can be between seven to nine feet. An adult zebra weighs between 660 to 950 pounds, and sometimes, it may even go up to 1000 pounds (especially in Grevy’s species). They have strong, rounded, muscular bodies with long legs and one toe on each foot. Their snouts are large and the ears are long, tapering and upright. The eyes are set high on their forehead, providing them with a wide range of vision. They have strong incisor teeth and high-crowned molar teeth, which help them to chew and grind grass. A zebra’s mane starts from the upper portion of the forehead and extends to the shoulder. It is erect, striped and bordered with black color. Their most striking feature, which differentiates zebras from horses and donkeys is the stripes. The backbone is straight and the tail is long. The tail ends in a bunch of black and white hair.

Zoologists believe that the black and white stripes in zebras serve the purpose of camouflage. The color blind predators may get confused between the stripes and the grass blades in the surroundings. Another possible reason is personal identification, as the pattern of stripes in one zebra does not exactly match the stripe pattern in another zebra. In fact, this is one of the most interesting facts about zebras. Their body stripes are often compared to human fingerprints, but it is still not proved whether they use the stripe pattern for recognizing each other. A common query about zebra stripes is whether these animals have a black skin with white stripes or a white skin with black stripes. According to recent studies, it has been suggested that these animals have a black skin with white stripes (and white underbelly in some cases). However, the skin color of zebras is still a much-debated subject. Now that you know what is the color of zebra stripes, let us take a look at some more interesting facts about zebra stripes.

It is also argued that the stripes help the zebras to cool down during hot season. As black color tends to absorb radiation, the air near the black stripes get hotter, thereby forcing down the cooler air in the surroundings to the white stripes. This process eventually cools the animal and also forms a shimmer around it. Even the vision of predators get blurred due to this shimmer. Another contention is that these stripes save zebras from the blood-sucking tsetse fly, which cannot easily recognize animals with stripes.

The visual sense of zebras is very good, as they have both day and night vision. It is believed that these animals have color vision too. They have very keen sense of smell and hearing. They can hear distant sounds and are highly sensitive to smoke. Their gait is almost similar to horses, except the speed factor. Even though zebras are seen walking and grazing for most of the time, they can also run, gallop and trot. When chased by a predator, they run fast from one side to other, in a zigzag manner. This technique is adopted to confuse the predator – usually a lion or a hyena. Once cornered, they bite their predators or kick them with their back hooves. They can run at a maximum speed of 40 miles per hour.

Zebras live in a wide range of habitats like mountains, hills, woodlands, grasslands and savannahs. Plains zebras prefer grasslands with trees and are usually seen near some water source. They are found in southern and east Africa. Mountain zebras, as the name suggests, live up in the mountains (in southwest Africa), where the atmosphere is cool. They are experts in climbing and like to take dust bath. Grevy’s zebras are mostly found in desert-like habitats in Ethiopia and Kenya.

Zebras are herbivorous mammals with a diet that mainly consists of grass. Sometimes their diet includes buds, roots, fruits, leaves and bark of trees. They need a huge quantity of food in order to meet their daily nutritional requirement. Hence, most of the daytime, they are occupied with the task of chewing their food. The sharp front teeth help them to bite grass, whereas the strong and blunt molar teeth are meant for grinding food. Teeth of these animals are said to grow throughout their lives, as constant biting and chewing can cause wear and tear.

The reproductive age for female zebras is around three years, whereas males can breed only when they reach the age of five or six. The gestation period is 12 months, after which, the female gives birth to a single foal. The newborn of a zebra (called foal) has brownish-black and white stripes. The foal can stand up soon after birth and can run within an hour. It feeds on the mother’s milk for almost 12 months. The whole family unit, including the stallion and the mother, takes care of the foal. In case of Grevy’s zebras, the foal is taken care of by the mother only. The lifespan of captive zebras is around 30 to 40 years, whereas the wild ones live up to 25 years.

Except the Grevy’s zebras, others are usually found in very big groups (herds), made of smaller units (harems). Each small unit consists of one stallion, several mares and the young ones. Zebras belonging to a group can identify each other. The adult male is considered the head of the group, but females have the discretion to select the direction of the group’s movement. The bonding between the members can be inferred from their social behavior. They often nibble at each other, rub their heads and shoulders and also sniff. Occasional fights are characterized by biting the legs and kicking. They communicate with barks, brays, sniffs and snorts. Barks and brays are signals to get alert. While sniff is a welcome gesture, snorts are made when they are tense. Zebras can sleep in standing position during daytime, provided, the other members of the group are awake to warn them about predators.

In short, zebras are intelligent social animals. Though they cannot be tamed like horses and donkeys, they are kept captive in zoos. Already some species of this animal are extinct (like Quagga – a subspecies of plains zebra) and some are endangered. So, the best thing we can do is to try to save this beautifully striped animal from extinction, by protecting them from hunting and habitat loss. 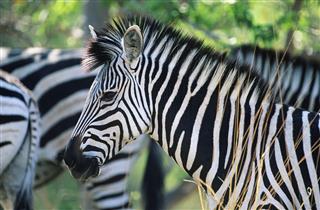 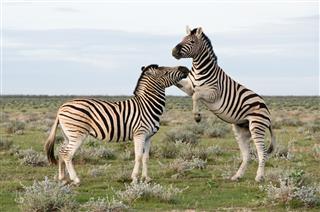 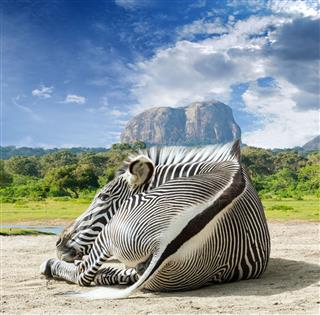 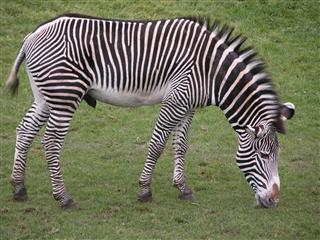 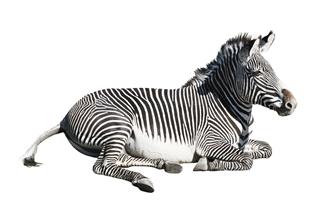