Predators of the Sea: The Life Cycle and Habitat of Killer Whales

Killer whale - the name itself evokes images of a monster ruling the ocean depths. These dangerous yet fascinating marine mammals rule the oceans around the globe. This AnimalSake article gives detailed information about their distribution and life cycle.

You are here: Home / Uncategorized / Predators of the Sea: The Life Cycle and Habitat of Killer Whales 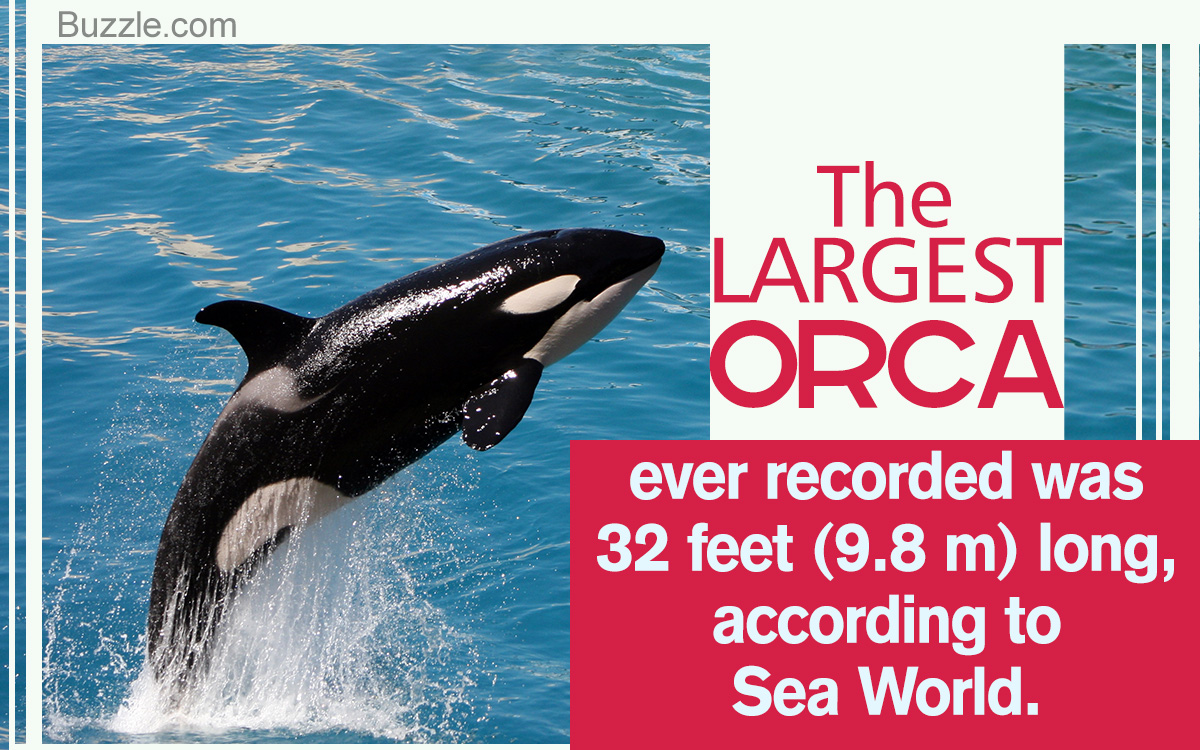 Killer whale – the name itself evokes images of a monster ruling the ocean depths. These dangerous yet fascinating marine mammals rule the oceans around the globe. This AnimalSake article gives detailed information about their distribution and life cycle.

I am the King!

A great white shark is known to be the top predator of the oceans, but killer whales can actually prey on them when they hunt in a pod (group). Hence, orcas become apex predators with no natural predators. 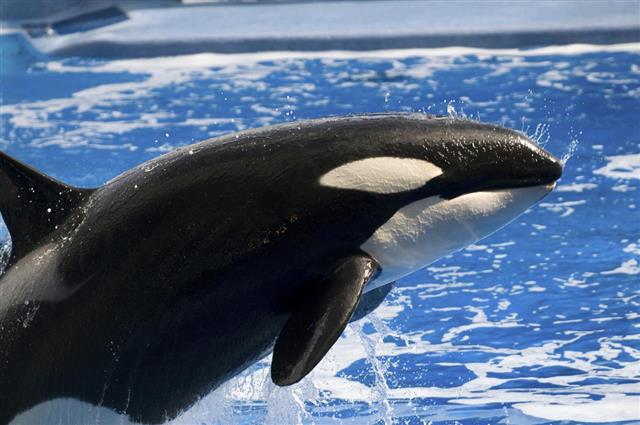 Contrary to popular belief, killer whales (Orcinus orca) are not whales but in fact a type of dolphin. They belong to the “delphinidae” family which makes them closer relatives of dolphins rather than whales. They are known by different names like orca, blackfish, or grampus (rare name). The name ‘orca’, meaning “belonging to the kingdom of dead”, was given to them by the Romans. This name is now commonly used to avoid the negative connotation associated with the word “killer”.

A male whale is called a bull, and a female is called a cow. They give birth to a live young one known as a calf, just like other mammals. These whales have rapid and excellent adaptability skills, which explains the reason why, after humans, they are the most widely distributed mammals.

➨ Identification: They are characterized by a distinctive white chest, black back, and a white patch above the eye. They also have a gray saddle-like patch behind the fin and across the back. The colors create a unique blend that enables them to sneak up on their potential targets undetected and launch surprise attacks. They are the largest in the dolphin family. The females will grow to about 6 – 8 m (20 – 26 ft), and the males grow to about 7 – 9 m (23 – 30 ft). The females have slightly smaller and curved dorsal fins, whereas the males have straight and triangular fins. 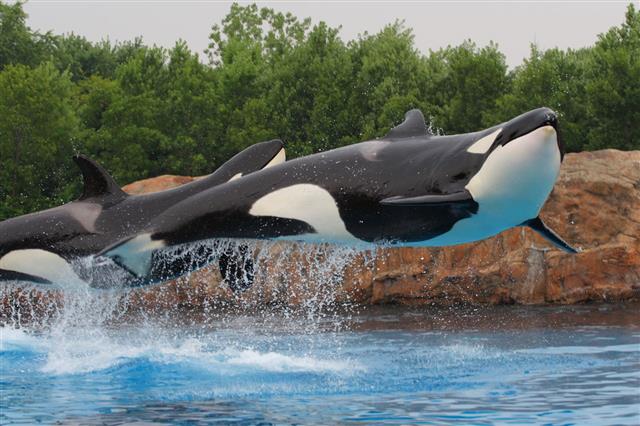 ➨ Culture: These giants never travel, swim, or hunt alone. They have a close ‘social circle’ known as a pod. The pods can include anywhere between 2 – 30 orcas that belong to a single family. A pod can include about 2 – 4 generations of orcas. They are mostly led by the oldest female in the pod. The older orcas are known to pass on knowledge to the younger calves in the pod. The passed on information may include hunting skills and vocalizations.

➨ Language: Another very interesting feature of killer whales is their communication system. They use a technique referred to as ‘echolocation’ to navigate and hunt in the darkness of the ocean. They emit high-frequency sound waves that bounce back from the prey or any obstructing surface. The reflected wave signals provide sufficient information for them to determine the distance and direction of their prey. The jaws of these mammals act as receptors which direct the signals to their inner ears. This capability makes them adept at traveling and hunting in the dark. Besides hunting, orcas have a special language to interact with their families. Also, every pod is known to have a different dialect. 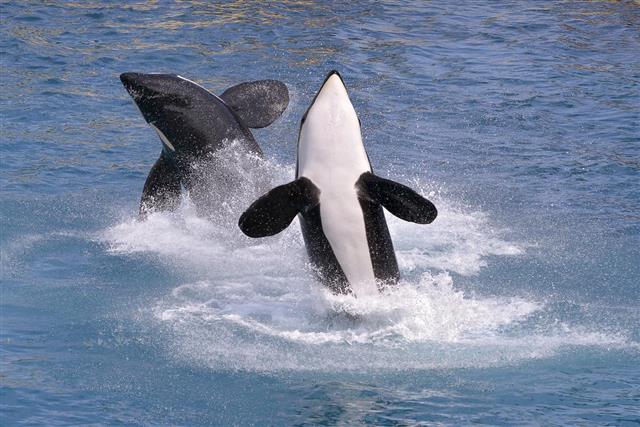 Lifespan: These giant mammals have a lifespan ranging from 50 to 80 years. The females live longer, an average of 50 years and maximum up to 80 – 90 years; the oldest orca on record was 103 years old. Males live to about 29 – 35 years on an average and for a maximum of up to 50 – 60 years. Orcas bred in captivity have a half the lifespan as compared to their wild counterparts. They usually live for less than 25 years, but some may live for 30 – 40 years.

Nursing of the Calf 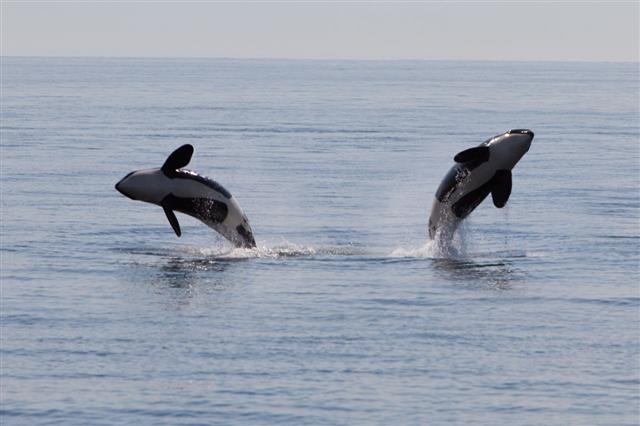 Orcas are usually found in cold, coastal waters around the world, though their presence has been recorded from the polar regions to the equatorial belt. They have a large population in the northern Pacific basin, coastal areas of Washington State, Johnstone Strait, and California. Large numbers are also found near Norway, coastal waters of Argentina, Iceland, and the Antarctic regions, although there were rare sightings in many places across the globe. They do prefer cold waters but are known to also swim in warm water regions like the Bahamas, Gulf of Mexico, Hawaii, and Australia. They have also seen swimming in freshwater rivers like the Rhine, the Thames, and the Elbe, in search of fish.

Migration of a species is subject to their prey’s living and migration habits. Fish and marine mammals are the preferred choice of the orca’s food, although the diet is a varied mix of seals, sea lions, reptiles, and walruses. Even polar bears, birds, and penguins have been victims of killer whale attacks. If there is scarcity of food, they may also go for big preys like sharks and whales. The entire pod will attack a big prey.

In the North Atlantic, generally, two types of orcas found. They are:

In the eastern North Pacific Ocean, they are divided as three types, which are:

In Antarctica, orcas are classified into four major types. They are:

The global population of orcas is estimated to be around 50,000, and luckily, they are not considered as “endangered”. They were subject to commercial whaling (mass hunt for whales) many times till the recent past. But, they successfully survived through it! Killer whales must be respected and cared for because they are not only beautiful, but also very intelligent.