A concise write-up which evaluates some of the most remarkable adaptations of the jaguar which help this wildcat survive in the harsh conditions of the tropical rainforests. Continue reading....

A concise write-up which evaluates some of the most remarkable adaptations of the jaguar which help this wildcat survive in the harsh conditions of the tropical rainforests. Continue reading…. 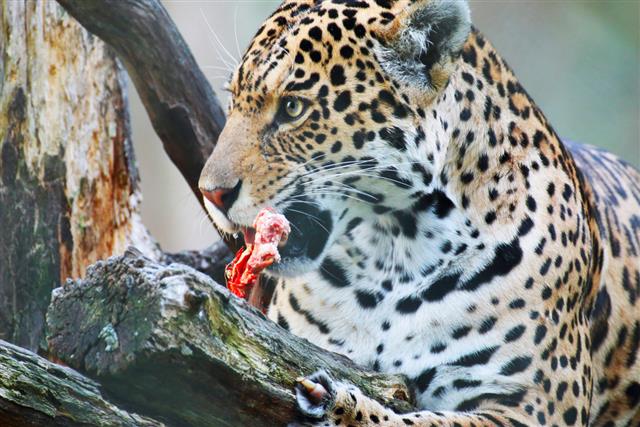 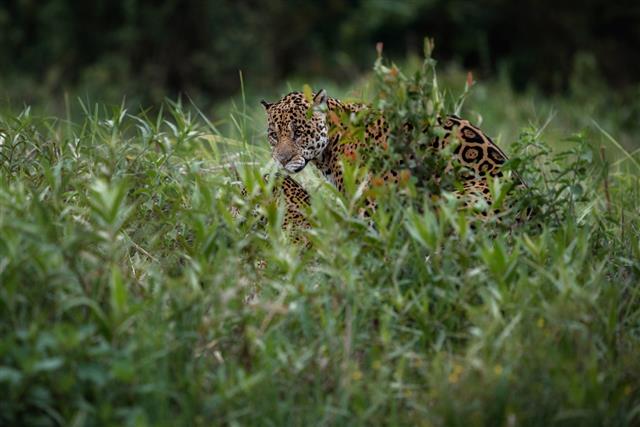 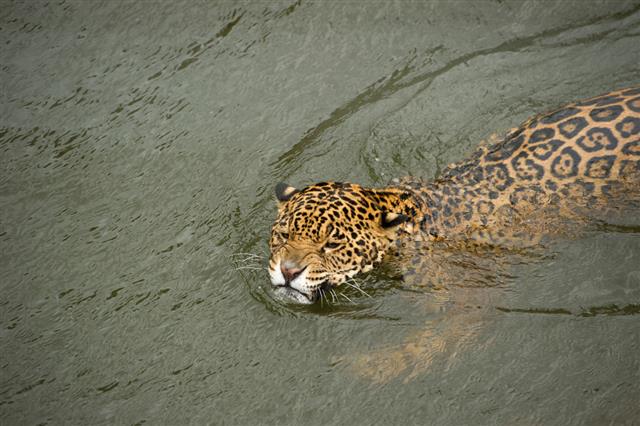 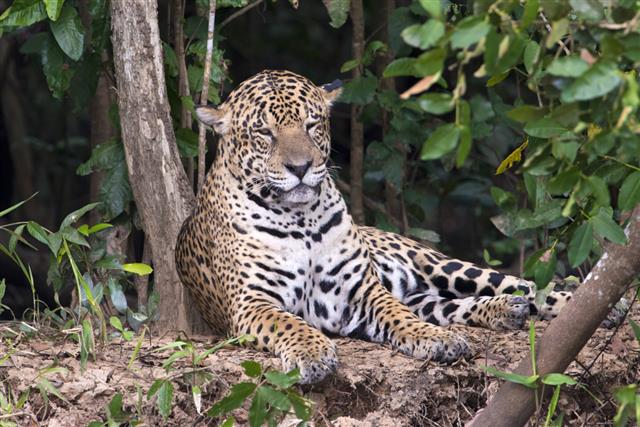 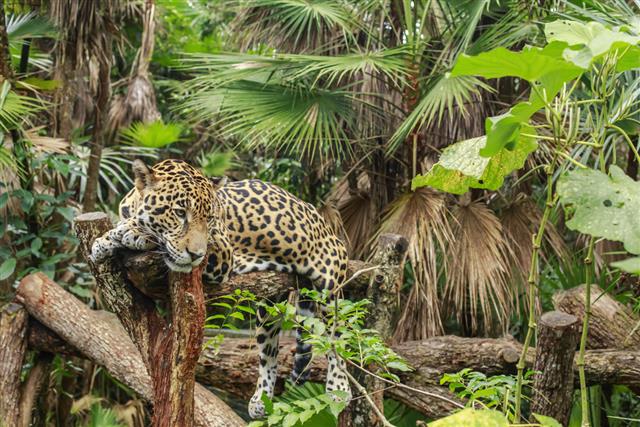 Jaguar (Panthera onca) is one of the four big cats which are found on the planet; the other three being the tiger (Panthera tigris), lion (Panthera leo) and the leopard (Panthera pardus). Though the third largest of these felines – with the lion and tiger being larger than it, the jaguar does boast of being the largest cat in the western hemisphere of the world.

The geographical range of a jaguar spans the tropical rainforests of South America as well as some parts of the southern United States and Mexico. As with various other rainforest species, even the jaguar resorts to some physical and behavioral adaptations to survive in these rainforests – which are typically characterized by continuous rainfall and minimal amount of sunlight reaching the ground. In fact, the adaptations of this animal are the most remarkable rainforest animal adaptations that you are likely to come across.

Adaptations are basically physical or behavioral characteristic traits which help the animal (or a plant for that matter) survive in a particular environment. While physical adaptations refer to structural modification of one or more parts of the body, behavioral adaptations – as the term suggests, are associated with alterations in way of life for survival. The cold regions of Alaska may not be suitable for human inhabitation, but species like the caribou and Arctic fox survive here with ease – courtesy their amazing adaptations. All the animal species of the planet resort to some or other form of adaptation to survive, and the jaguar is no exception. Discussed below are some of the most remarkable adaptations of the jaguar which help it survive in its natural habitat.

Though the term ‘big cats’ is often used to refer to these four species belonging to genus Panthera, it is not an actual biological classification as such. In a broad sense, this term also encompasses species like the cheetah, cougar, and the snow leopard.

A characteristic description of a jaguar is incomplete without the mention of its yellow coat with dark spots on it, and this spotted fur has a crucial role to play when it comes to camouflage for this species. As we mentioned earlier, jaguar habitat is typically characterized by dense forests wherein the amount of sunlight reaching the forest floor is minimal due to dense upper story. Though a little bit of sunlight does reach the forest floor, it comes in small patches, and the spotted fur of the jaguar blends with these patches of sunlight to help it camouflage.

While the spotted fur happens to be one of the crucial jaguar adaptations to environment, other physical adaptations like the large head, modified jaw and extremely sharp canines are also quite important. Interestingly, jaguars are occipital crunchers i.e. they kill their prey by grabbing it by its head and crushing its skull. While their sharp claws help the jaguar grab its prey, the raw power exerted by its jaw helps it pierce its canines right through the skull of its prey. This jaguar behavioral adaptation is not seen in any of the other four big cats; with lions, tigers and leopards killing their prey by strangulation by grabbing it by its neck.

Jaguars are amazing swimmers – a behavioral adaptation which works wonders for them as their native habitat is typically characterized by presence of several rivers, streams and swamps. More importantly, they also hunt for food in water wherein they feed on fish, turtles, baby alligators, etc. In what can be called one of the most peculiar methods of hunting, jaguars wade through shallow water, and use their paws to throw the fish out of the water and then grab it. The paws of a jaguar don’t just help it hunt in the water, but also helps it close in on its prey without making any noise as they are well-cushioned.

Open areas have no dearth of food supply in terms of large herbivores, and hunting here is a lot easier as compared to hunting in the dense forests. That explains why the subspecies of jaguar which inhabit the forests are smaller than those which inhabit the open areas. The fact that forest-dwelling jaguars are relatively smaller, doesn’t just help them survive on the limited amount of food they get, but also helps them climb on trees and stay there for weeks together when forest floor gets flooded with rainwater.

Alongside all these adaptations, jaguars are also known for their maneuvering skills which come handy when chasing swift animals like antelopes and deer in dense forests. As with several other species of animals, the tail of a jaguar – which helps it retain its balance, adds to the maneuvering skills of this animal. With all these adaptations to its credit, the jaguar doesn’t just survive the harsh conditions of the rainforest biome, but also sits at the top of the rainforest food chain as the apex predator. 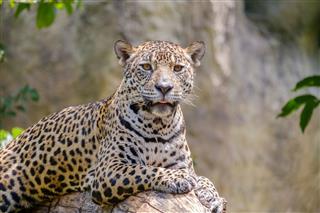 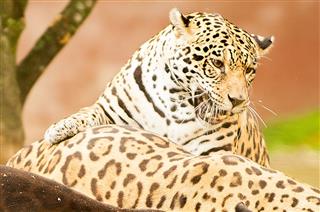 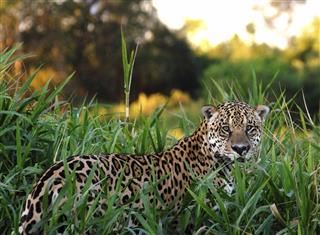 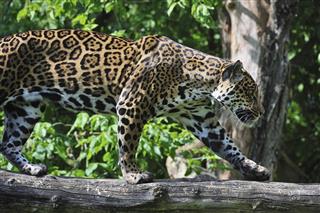 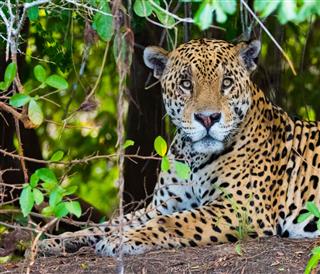 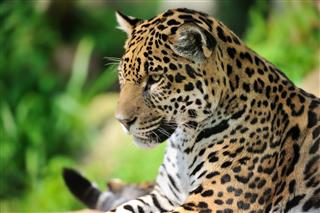 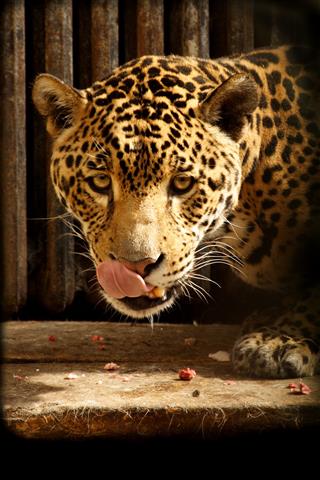 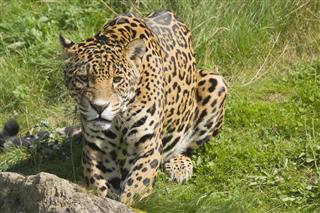 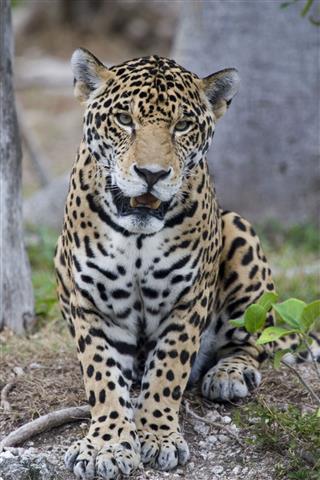 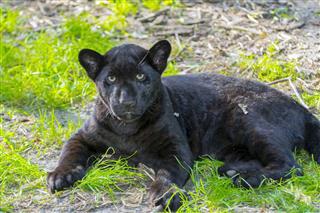