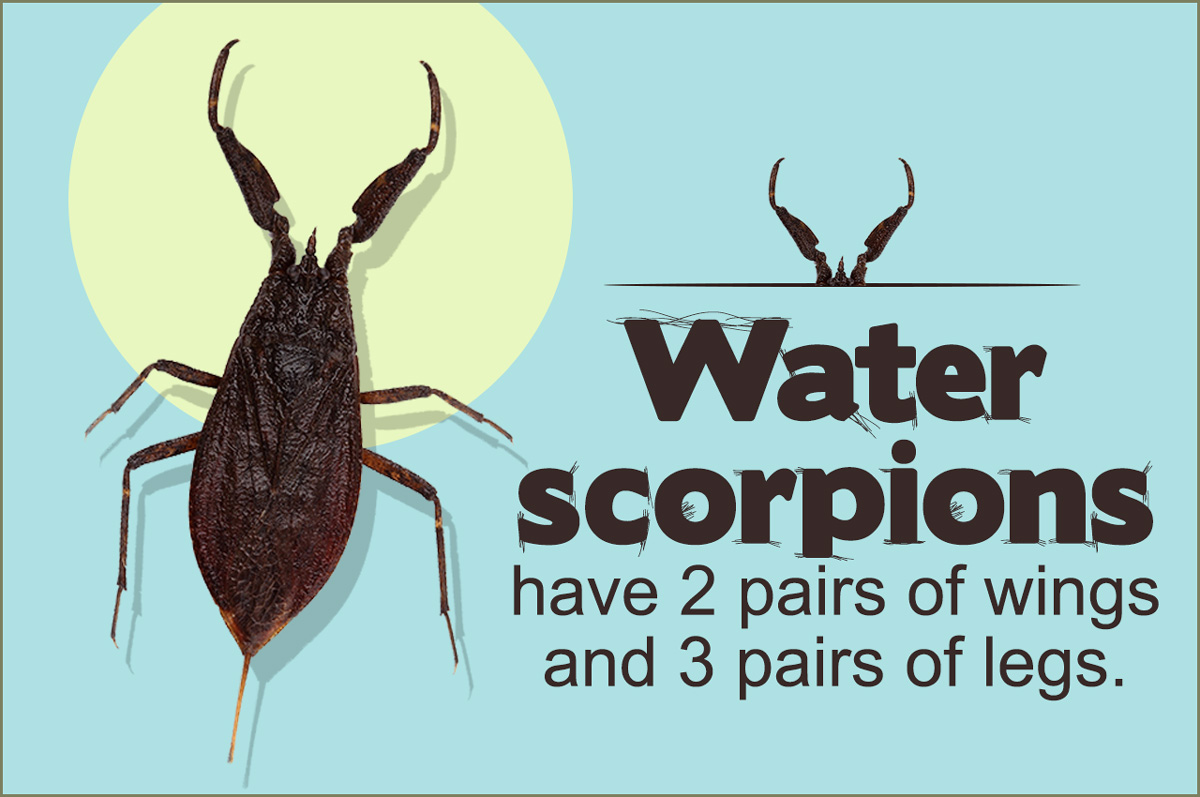 Ponds are housing grounds for myriads of insects like mayflies, water bugs, water scorpions, etc. Scores of insects enter into this world in ponds, and while some of them spend their entire lives in them (adapted to living in water), others leave once they attain adulthood.

Pond insects feed on larvae of other insects found in ponds, decaying vegetation, and algae. Each insect species is well-adapted to surviving in the aquatic environment, and the characteristics of each species is unique and interesting to know, which is why pond insects are popular among children.

Mayflies are usually found in fresh running water of ponds, and can be identified by their unique leaf-like gills. On each side of the mayfly’s abdomen are 7 pairs of gills, which look like tiny leaves. When mayflies swim about in the water, their leaf-like gills continuously move, enabling us to identify them easily. The mayfly nymphs have flat bodies, a flat head, and flat legs which enable them to adhere to lower surfaces of rocks and other rough surfaces. These nymphs are about 2.5 cm long, and usually have three tails attached to the abdomen. They also have 3 pairs of segmented legs ending in claws and visible wing pads. Mayfly nymphs are harmless and feed on algae and other decaying vegetation. Fish, trout, water bugs, etc., are found to eat these nymphs.

The mayfly lives in this nymph stage for a period as long as a year, and when it becomes an adult, it flies into the sky. An adult mayfly has two sets of wings, of which the forewings are larger. The adult holds the wings high above itself when it is at rest. At dusk, scores of mayflies can be found flying over the pond. This is actually their mating period. Adult mayflies do not live long as they do not eat (their mouth parts become useless once they become adults). So, as soon as they mate, the female lays eggs in the pond water and the parental mayflies die. Therefore, the mayfly lives in the nymph stage for almost a year, whereas in the adult stage it lives only for a day or two.

The term ‘bug’ is often used to refer to the term ‘insects’, however, not all insects are bugs. Water bug is a type of insect which has its wings neatly crossed at the tip, whereas the wings of a beetle are found to meet straight down its back. The differentiating factor between water bugs and other water insects is its jointed beak, which is used for sucking juices. Water boatmen, giant water bugs, and backswimmers are different types of water bugs.

Water Boatmen: These flat and elongated aquatic insects live in ponds and slow-moving waters, and are usually found swimming at the bottom of the pond. They have two short legs which are scoop-shaped at the hip, and four hind legs which are covered with long oar-shaped swimming hair. The name water boatmen is given to this insect because of the oar-shaped hair on its hind legs. These insects are harmless and they feed on aquatic plants and algae, and not on other insects. Through their triangular straw-like mouth parts, saliva is injected into the plant which then digests the plant material. The liquefied plant material is sucked by the insect as nutrition. Water boatmen are often found swimming in clusters and can be quite a nuisance when their numbers increase. In parts of Mexico, people consider these insects as delicacies.

Giant Water Bugs: This water bug is almost 2½ inches in size, and is equipped with strong, powerful legs for swimming. Its large, powerful, piercing beak consists of mouth parts in the form a tube, so as to suck the food. These bugs are far bigger than other insects and are found to eat birds, fish, and other aquatic insects by piercing their sharp mouth parts and injecting enzymes into the prey’s body causing it to liquidize. Their bites prove to be nasty, thus we must be careful while dealing with them. These giants are found in slow-moving waters and often move from one pond to another in search of food, and are even found to be attracted to electric light.

Backswimmer: This pond insect swims on its back, which is how it gets its name. These insects have long and strong hind legs, which aid in swimming, however, these hind limbs are not suited for walking on land. These 15 mm long insects can be recognized by their curved back and large eyes. In fact, some of them have red eyes and silvery-white backs. Backswimmers hang upside down in water, that is, their head is downwards, followed by their body and legs that thrust upwards for air. While resting at the surface of the pond, they trap air from the surface of the pond into the air sacs below their wings. They feed on other pond insects, small fish, and tadpoles, while some are even seen attacking salamanders. Backswimmers can be quite a nuisance, since they devour all the pond fishes. However, to get rid of them, one could put two or three sunfish into the pond, which will devour the backswimmer population.

Stoneflies are found in running water streams and pools, and are usually not found in quiet, still ponds. Like the mayflies, they are also found adhering to rocks, and in appearance are very similar to the mayflies, making it difficult to differentiate between the two. However, stoneflies lack leaf-shaped gills, instead have thread-like gills. Two long antennae and three segmented legs ending into two claws on each foot, four wings (which are held flat in resting position) and two tails on the adult are features of this insect. Some of the stoneflies’ nymphs are herbivorous, whereas others are carnivorous.

Drone flies often resemble drone bees, and are commonly found in muddy ponds and stagnant waters. Often, these insects are mistaken for bees while they are in flight. However, unlike bees which possess 2 pairs of wings, drone flies only have one pair. Their larvae are also called ‘rat-tailed maggots’ due to the long tail present at the end of their fat body. This tail is no ordinary tail, for it brings fresh supply of oxygen from the surface of the water. Just like how pieces of a telescope fit into one another, so also do the pieces of their tails. The telescope-type air tube enables the drone fly to live in muddy and stagnant waters which are oxygen-deficient.

Female dragonflies lay their eggs on the surface of water plants, which then hatch into nymphs. The nymphs spend most of their lives below the surface of water, using their large lips to catch tadpoles, snails, insect larvae, etc., as food under water. The dragonfly can live in the larval stage from one year, to a period as long as five years, before it metamorphoses into an adult. Adult dragonflies are characterized by their long, transparent wings which are held stiffly away and perpendicular to the body like a helicopter’s wings. Six legs, multifaceted eyes (providing 360 degree vision), and brown or green elongated body (camouflage against predators) are some other features of this insect. They are found flying across ponds, scooping down to catch little insects and mosquitoes. Despite their ferocious appearance, they are harmless insects which do not sting or bite human beings.

These pond insects are seen to skate or walk on the water surface, thus are also known as ‘water skaters’. Their bodies are covered with black-brown hair and are easy to identify because of their second and third long legs (double the size of the body). The tiny water repellent hair on their legs have tiny air bubbles, which allow them to skate on the water surface. The front legs are shorter and are used to attack and catch the prey. This 8-12 mm long, water strider uses the vibrations on the water surface to locate its prey. It uses its piercing and sucking type of mouth to suck the prey dry. An interesting fact about these pond insects is that they create ripples on the water surface, to attract the opposite sex for mating. Even though these insects walk on water, they dive underwater, whenever they encounter danger from predators. Once the predator has passed, they resurface and resume walking. They feed on shrimp, mosquito larvae, and dead insects that drop onto the water surface.

The name water scorpion is given to this insect because of its specialized forelimbs which resemble the ‘pincers’ of a scorpion, as well as the breathing tube at its tip which resembles the long stinging tail of the scorpion. These insects have 2 pairs of wings and 3 pairs of legs. Of the legs, the forelimbs are specialized to grasp the prey, with outer segments folding into grooves to secure the prey. However, unlike the scorpion, the water scorpion does not have pincers. At the base of the abdomen, there exists a tube (resembling scorpion’s sting), which is actually made up of two straight filaments pressed against each other and unlike the sting, it is used to obtain air from the water surface. These insects are often overlooked as they resemble twigs, sticks, or dried leaves. These insects are slow-moving and often not recognized by their preys such as nymphs of other pond insects, worms, and shrimp. 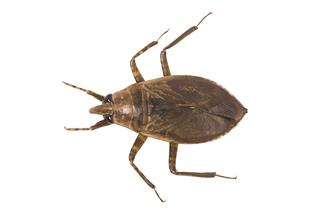 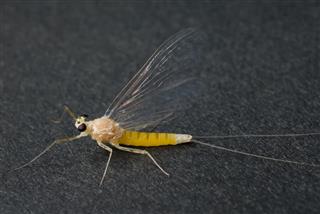 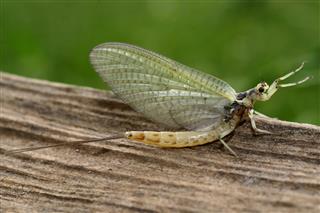 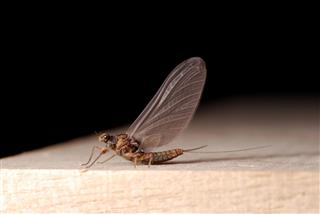 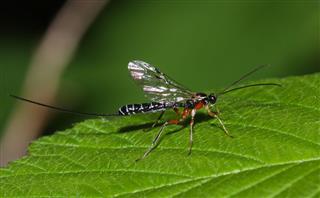 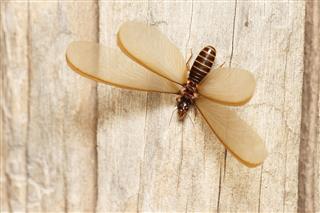 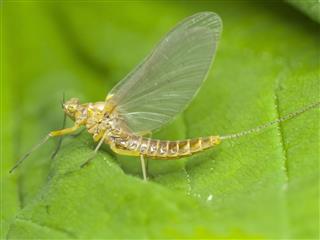