Surprising Facts About Armadillos That Will Leave You in Awe

Armadillos are small to medium-sized mammals from Dasypodidae family, which is closely related to sloths and anteaters. They are unique creatures in many ways.

You are here: Home / Uncategorized / Surprising Facts About Armadillos That Will Leave You in Awe

Armadillos are small to medium-sized mammals from Dasypodidae family, which is closely related to sloths and anteaters. They are unique creatures in many ways. 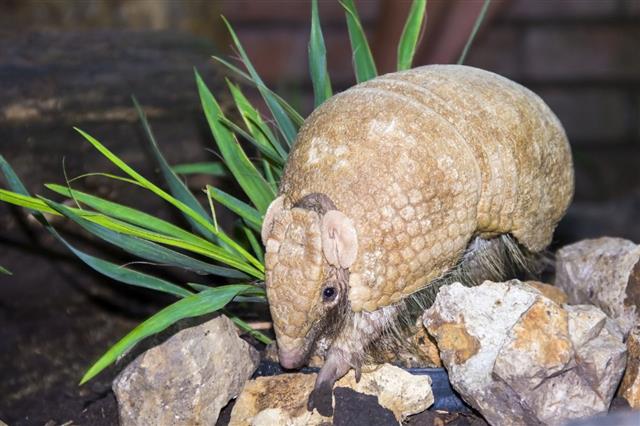 The name ‘armadillo’ is a Spanish word, which means ‘little armored one’, because its shell looks like an armor, comprising many small bones.

The smallest variety is the pink fairy armadillo, which is 6 inches in height while the largest one is the giant armadillo which can grow up to 1.5 meters in height. The average life expectancy of armadillos is 12-15 years in captivity. Extrapolating from similar sized animals, the average life span of armadillos in the wild is estimated to be around 5-7 years.

Armadillos are said to have evolved from huge, bony-shelled animals called glyptodon and panochthus. Comparatively, the present-day armadillo is smaller; however, it has retained the hard shell of its ancient counterparts.

1. Armadillos are the only living mammals with armor-like shells.

2. Armadillos have a very low body temperature that ranges between 33° C to 36° C.

3. A female nine-banded armadillo can give birth to 56 pups in her lifetime, all of which are born as identical quadruplets.

4. Armadillos have a strong olfactory sense, and can smell up to 20 cm below the ground.

5. Armadillos sleep for 18-19 hours a day and are active during the night. 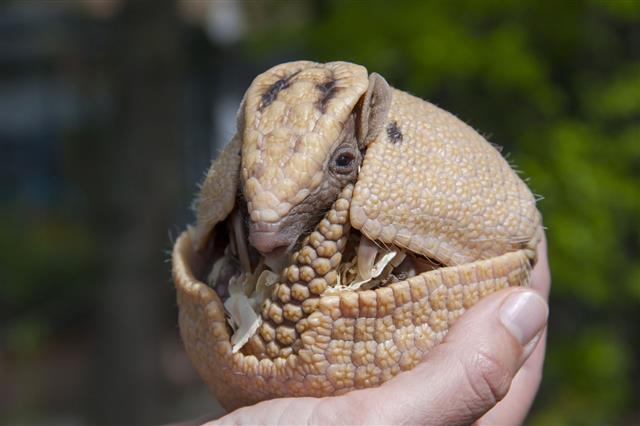 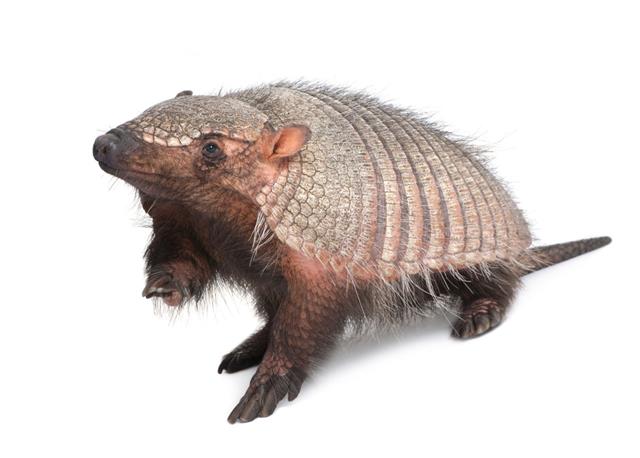 They have short legs, but they can move pretty fast in times of danger. Their outer shell helps them to move faster in dense forests, without getting hurt. They can easily climb over fences and trees which are not too high. 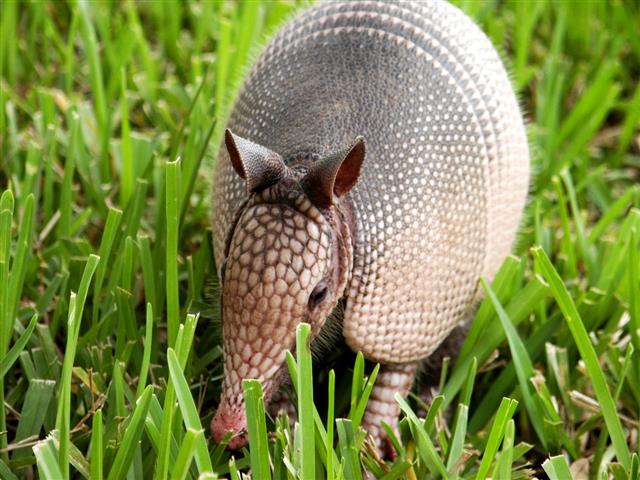 Armadillos can hold their breath underwater for almost six minutes, and can swim across ponds and rivers.They tore air in trachea and wide bronchus. In water, the weight of their shell can easily make them sink, but interestingly, they do not. They are able to float on the water by filling their lungs and stomach with air, which makes them swell and double their original size. This ability increases their buoyancy than that of water.

Armadillos can store air in trachea and wide bronchus and, can stop breathing for 6 straight minutes during burrowing. The pink fairy armadillo uses its front claws to push aside the sand, enabling it to swim in it just like it does in water. Also, it has a torpedo-shaped body with a shielded head for protection. 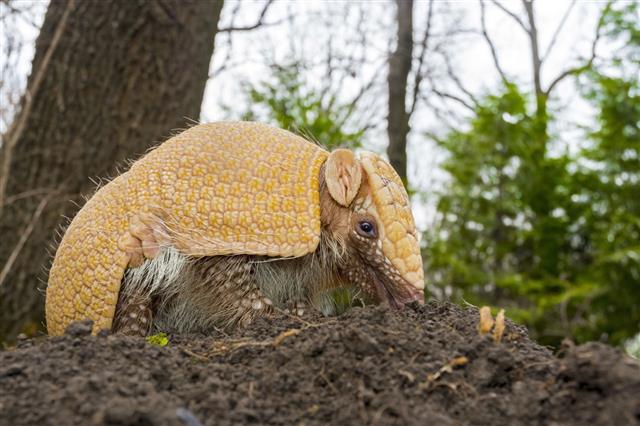 These animals have poor vision, but they have a strong sense of smell. This enables them to sense food and predators from a distance. They also have a long sticky tongue and viscous saliva to grasp insects. 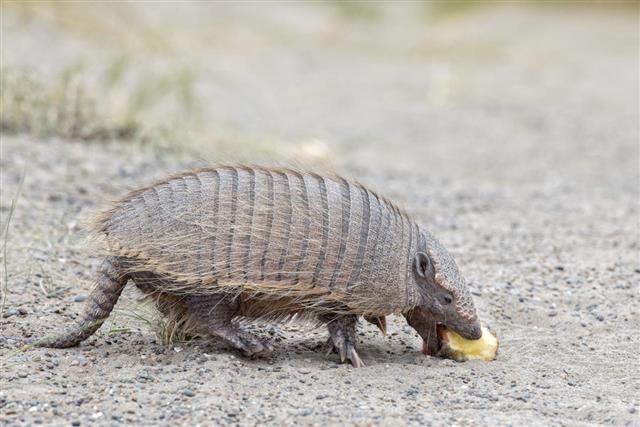 They have a few peg-like molars for teeth that do not have enamel coating. They only eat soft food which does not need stronger teeth. 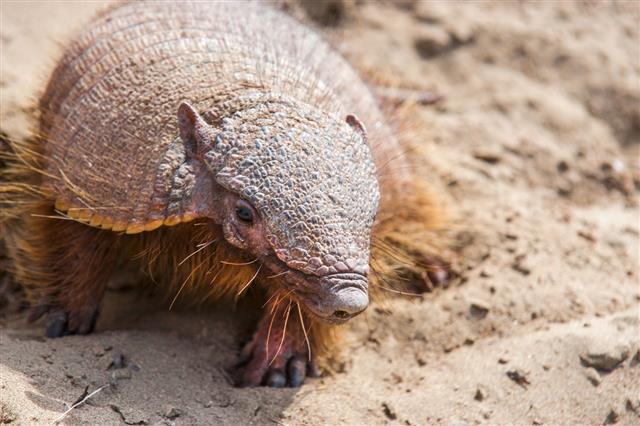 The screaming armadillo has more hair than any other species of armadillos. Moreover, it has around 18 bands, but only 6 to 8 out of them are movable. 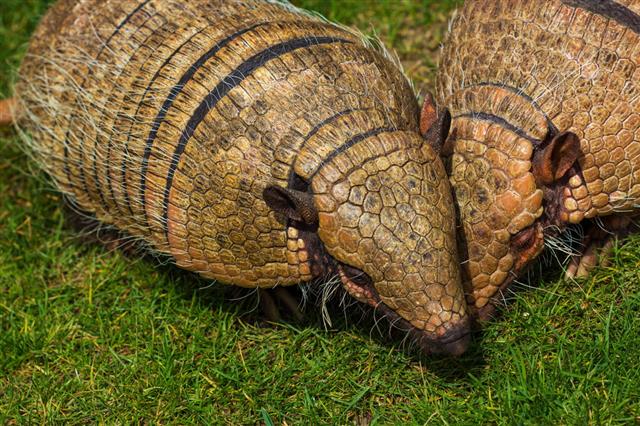 Armadillos are found only on the American continent. They prefer warm and humid climates. They have slow metabolic rate, which means it cannot survive in cold regions. Out of the 20 varieties, nine-banded armadillo is the only one which is found in the United States. 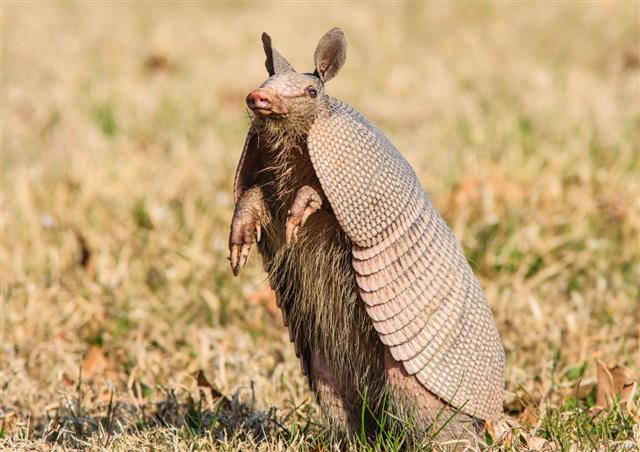 Armadillos are solitary animals, and they do not like to share their burrows with others. Armadillos mark their territories by spraying urine, defecating, and by secreting scent from glands found in their eyelids, nose and feet.

Armadillos prefer to live near moist regions like streams, rivers, creeks, ponds, reservoirs and tropical forests, because these places have moist soil that is easy to dig. They also prefer living near ant colonies. Some species prefer to live near sandy areas. They dig with their front claws. Armadillos tend to dig 10-15 burrows, with at least 4-5 entrances. 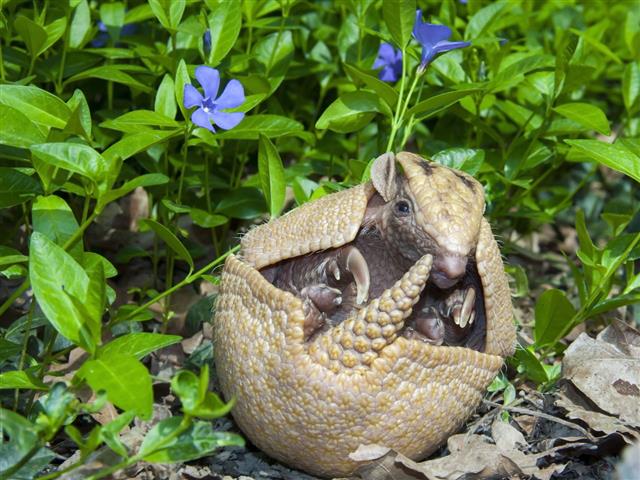 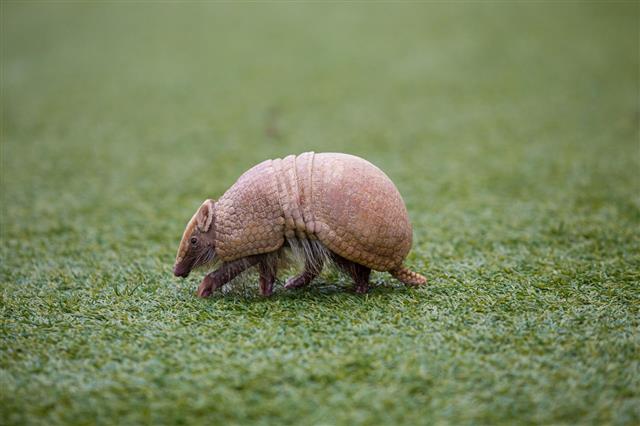 Armadillos also eat small ground-nesting birds and their eggs. Armadillos consume carcasses of animals, eat plants and fruits, and some of them, like the giant armadillo, can damage agricultural farms. 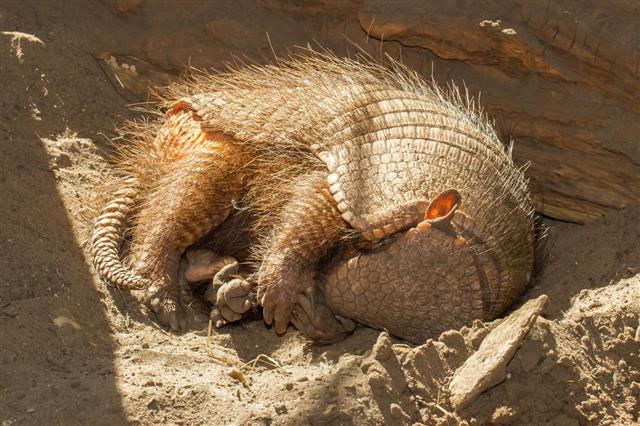 Armadillos like to dig soft soil in order to find insects and worms. A freshly-filled human grave is soft to dig, and it’s easy for these animals to find worms there. As a result, there is a common myth that armadillos are ‘grave diggers’.

Armadillos mating season is usually for 2 to 3 months. Based on the species, the gestation period may last from 60 to 120 days. 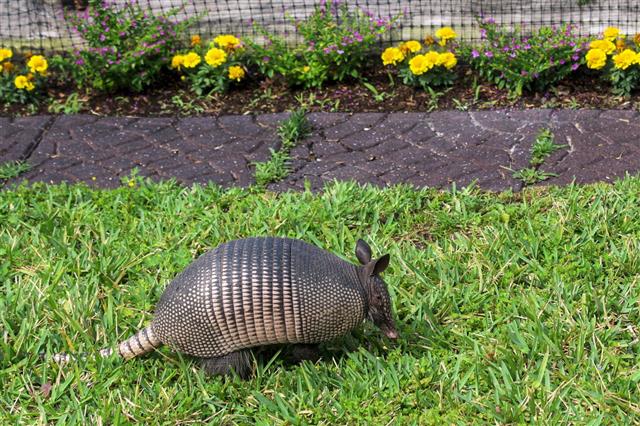 Armadillos are ready for reproduction, from 9 to 12 months of age. During the breeding season, the nine-banded male and female share a burrow. In the nine-banded armadillos, females are inclined to mate with only one partner. The male, however, may have many partners.

Armadillo Can Delay its Gestation 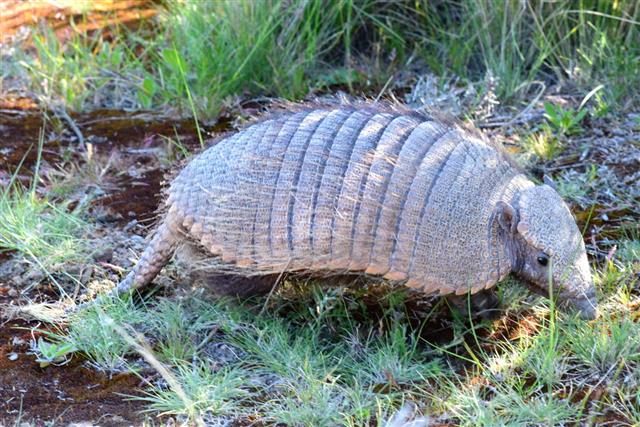 The armadillo has the ability to delay its gestation period for some months, and if distressed, can even delay giving birth up to almost two and half years. Even after fertilization of the egg, it can take several months for the egg to get implanted in the lining of the uterus. 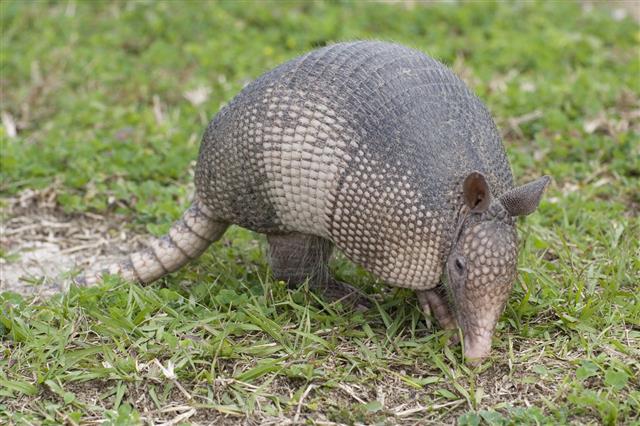 In the nine-banded armadillos, the young ones are produced from a single fertilized egg. This results in the birth of four identical pups in one litter. Other species may give birth to 1-8 pups. All the species nurse their pups with milk.

The young ones are born with a leather-like skin, which hardens over a period of time. Also, it is interesting to note that armadillo pups are born with their eyes open.

Armadillos have a very low body temperature, hence they need to burrow in places that are warm. Also, they do not survive in places where the ground is too hard as they have to dig the soil for shelter and finding food.

For self-defense, the three-banded armadillos have the ability to roll into a ball when they sense any kind of danger. However, other species of armadillos cannot do this as they lack flexibility due to their hard covering. 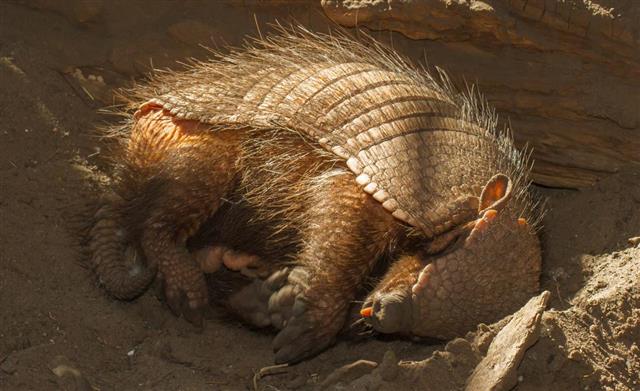 Armadillos dig many bolt-holes and burrows which are connected to each other through tunnels. They hide themselves inside the tunnels if they feel threatened. 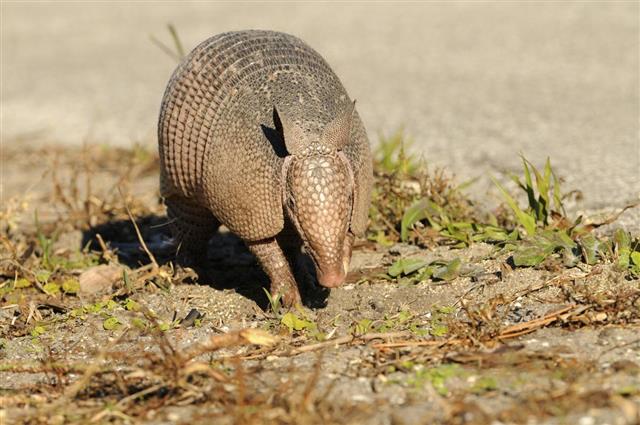 All the species are good at running, and usually hide in a burrow. The nine-banded armadillo can jump four feet up in the air, if it is startled. The pink fairy armadillos are very quick in burrowing themselves, when they sense a danger. The screaming hairy armadillo has got its name from its habit of crying loudly when touched or threatened.

A pichi armadillo has jagged scales on its body, which makes it difficult for a predator to pull the animal out of its burrow.

In the times of depression, armadillos were often consumed by people. They were derogatorily termed as “Hoover hogs” by people, after President Herbert Hoover failed to keep his promise of a “chicken in every pot”.

In 1995, the State of Texas made the nine-banded armadillo its ‘official state small mammal’.

Many people rear armadillos as edible house pets. In Central and South America, people consume armadillo meat as a part of their diet.

As armadillos are suspected to be the carriers of Mycobacterium leprae (a bacterium responsible for causing leprosy), its undercooked meat can lead to infection in humans.

Armadillos may act as pests in destroying farms, landscapes or gardens. That’s why, many farmers kill these animals to protect their properties.

Human encroachments, hunting by dogs and other predators, mining, road kills, hunting for making musical instruments and accessories, etc. have also led to the decline in the population of armadillos.

Only the population of nine-banded armadillo species is growing, while the remaining are threatened or on the verge of extinction. Armadillos are valuable for maintaining the ecological balance and carrying out medical research. It is the duty of every human being to preserve and protect these precious wild animals from extinction. 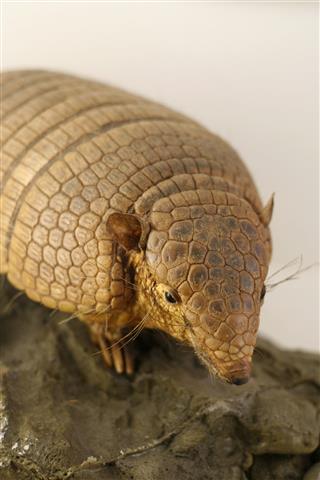 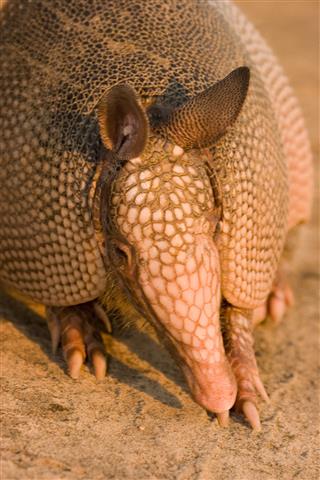