The puffer fish is a unique creature with several distinctive features to its credit. What is even more fascinating is that a fish with so many characteristics can, at the same time, be very poisonous too.

The puffer fish is a unique creature with several distinctive features to its credit. What is even more fascinating is that a fish with so many characteristics can, at the same time, be very poisonous too.

The amount of toxin a puffer fish has, is enough to kill 30 adult humans. Surprisingly though, tiger sharks are immune to this toxin, and as a result they can swallow this fish even when it is in inflated state.

The puffer fish is one of the most interesting and unusual species of fish with several unique characteristics to its credit. When it feels threatened, it puffs up to double its size by swallowing water or air. There is little questioning the fact that the puffer fish is widely known for its ability to inflate itself, but one has to understand that this is an adaptation which compensates their inability to swim fast. Not to forget, some puffer fish species have tiny spines which only become visible when they inflate themselves.

There are somewhere more than 120 species of puffer fish, most of which inhabit the tropical and sub-tropical regions of the world. The coral reefs in the Indian, Pacific and Atlantic Oceans are home to several species, but seldom are they found in the cold waters. Even though they generally dwell in coastal areas, some can even be found in oceans and deep seas. Mostly, they are also found in freshwater sources and brackish waters. Around 39 species that inhabit marine waters swim into fresh or brackish waters either for breeding or feeding. Similarly, there exist around 25 species that live entirely in freshwater without ever entering the sea.

» Tetraodontidae is the scientific name of the puffer fish, which pertains to their four large-sized teeth that are fused together to form a lower and upper plate. They use these specialized teeth to crush the shells of mollusks and crustaceans, which are their natural sources of food.

» The round plump body is one of its main distinguishing characteristics. Another unique feature of this fish is that its skin is thick and leathery, which has tiny spines instead of scales. These spines are set deeply into the pores. As long as the fish is not alarmed, the spines are not apparent. However, the moment it spies a predator, it immediately inflates itself making the spines erect. Although most species are 3 – 20 inches in size, some can even grow up to 3 feet in length.

» Once the body of the puffer fish is fully bloated, its predators can neither take a grip nor bite through the skin. In fact, it has been found that its tough body remains unscathed even after a grown man stands on it. It is difficult for the fish to expel air as compared to water, hence, it usually inflates its body with water instead of air, since it can expel water more easily. This happens when it releases the muscular valves, allowing the water to be ejected through the gills and mouth.

» It can inflate its body in just a few seconds by swallowing big gulps of water or air, which it usually does at the water’s surface. The puffer fish is able to accomplish this incredible feat due to a sac attached to its intestines. It uses a kind of muscular valve to shut off its esophagus and stomach. Then it uses its specialized gills, which behave like a suction pump to fill up the sac. As it does not have any pelvic bones or ribs, it can expand itself to a great extent.

The Poisonous Puffer Fish as a Delicacy

Puffer fish are also known to be highly poisonous. Many parts of the fish, such as the skin, ovaries, muscles and liver have a very potent and paralyzing poison known as Tetrodotoxin, which is around a thousand times more deadly than cyanide. Even then, the puffer fish, known as fugu in Japan and bogeo in Korea, is considered a delicacy in these countries. Specially trained chefs prepare this deadly fish as they are the ones who know exactly how to reduce the fish’s poisonous effects. Despite this, it is said that about a hundred diners die every year after consuming this delicacy. One has to note the fact that there is no antidote for tetrodotoxin. However, some species are not poisonous, like the Takifugu oblongus and the specially farmed puffer fish.

Although the puffer fish is poisonous, it is a popular aquarium fish as it becomes quite tame and displays individuality. Make sure you do not hand feed them as they have very sharp teeth. A few aquarium owners induce their puffer fish to puff up to show it off to friends. But do note that this causes a lot of stress to the fish and should not be done. 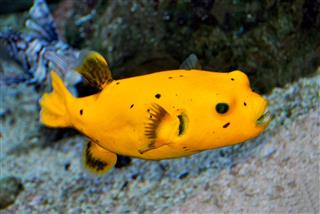 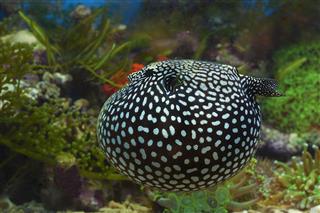 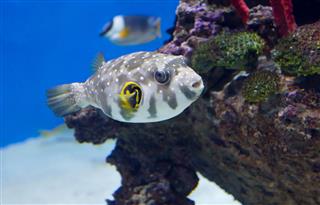 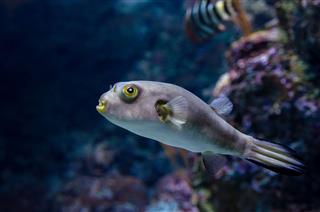