Although born to dwell in a specific habitat, animals have to adapt to the changing environment for survival. The Red panda is one such species, and its adaptations are described in the following information.

Although born to dwell in a specific habitat, animals have to adapt to the changing environment for survival. The Red panda is one such species, and its adaptations are described in the following information. 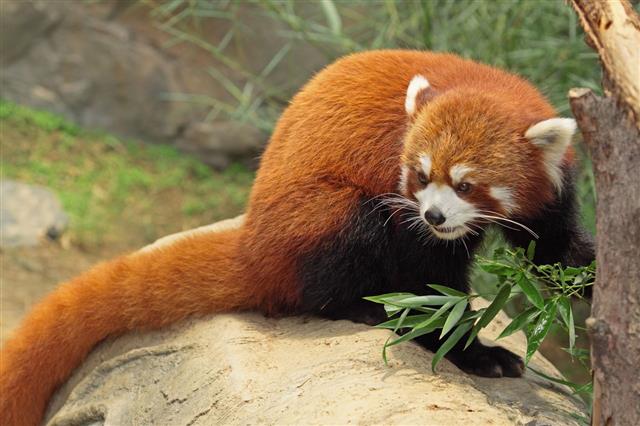 Scientifically, Red Panda is known as Ailurus fulgens or fire-colored cat. It got these names because of its cat-like face with long white whiskers. 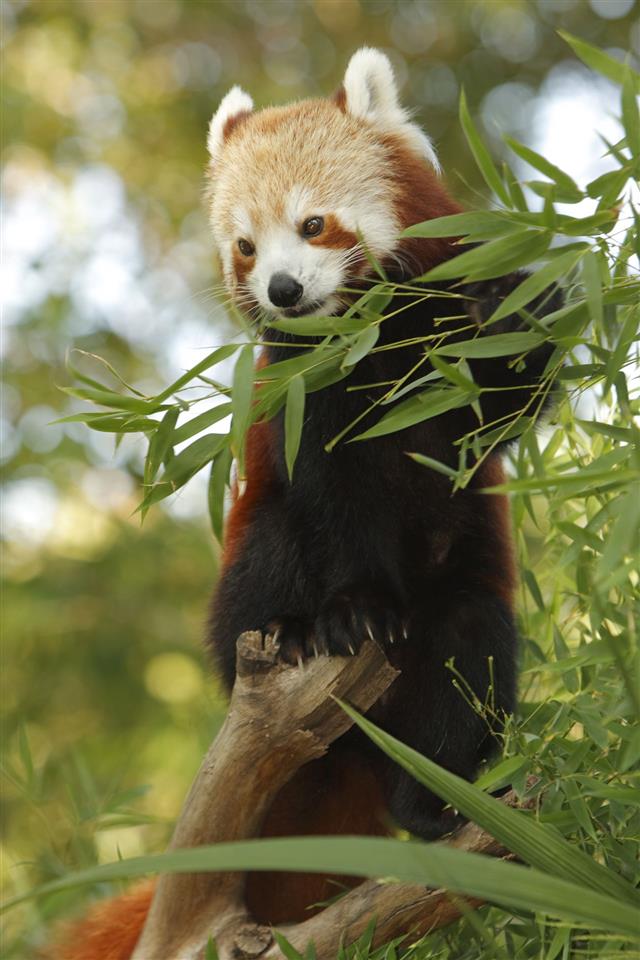 Interestingly, the word ‘panda’ comes from the Nepalese word poonya which means a bamboo-eater. 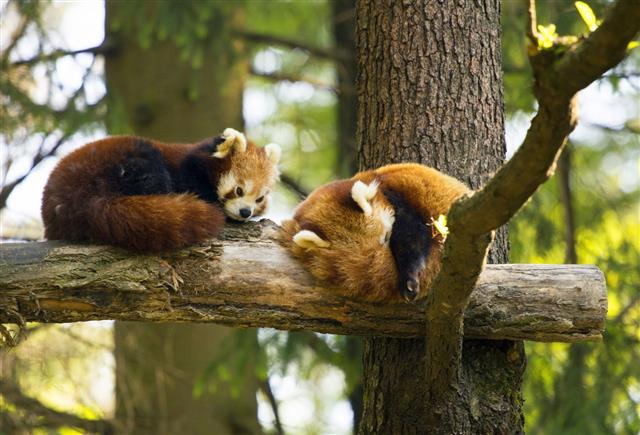 After a small introduction to this temperate forest’s resident we shall move on to its classification and see how it adapts to the environment for survival.

Classification of the Red Panda 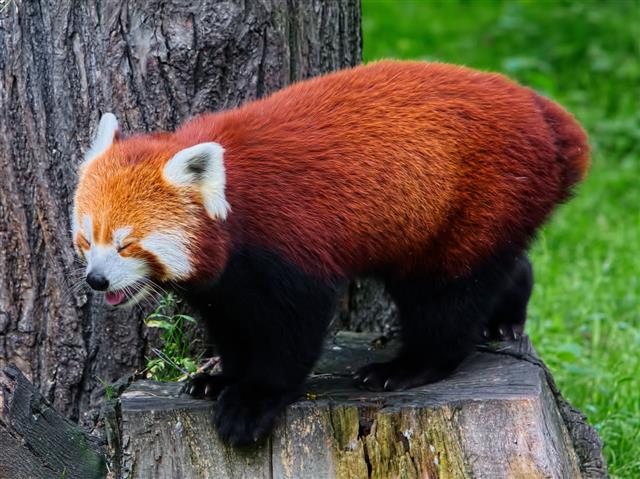 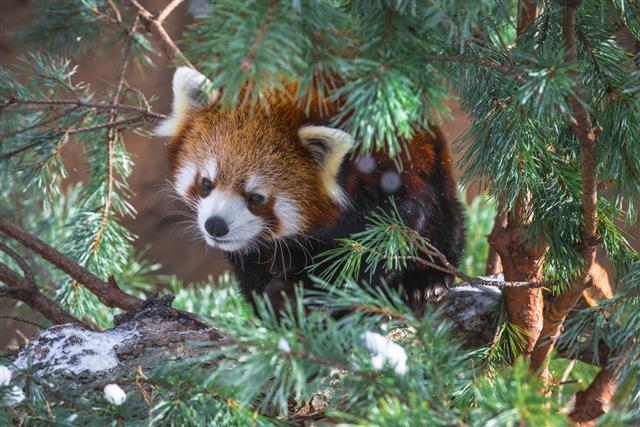 Due to the persistent confusion about the origin of the red panda, it has finally been categorized under its exclusive unique family called the Ailuridae. 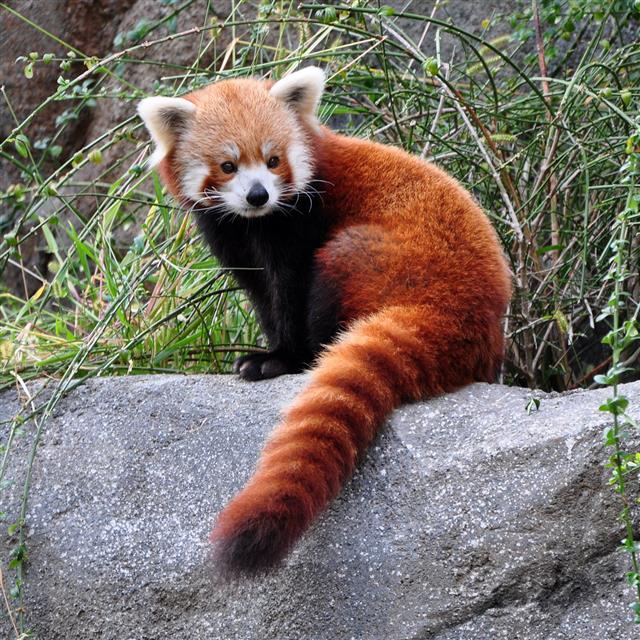 Why do red pandas have a long bushy tail? It is because they belong to the raccoon family and both the species have similar tails; the tail is often called a raccoon tail. Both the raccoon and the red panda balance on their long bushy tail while climbing a tree or a rock column. Similarly, it uses its tail to cover its face while sleeping during daytime, and its nose in cold weather. 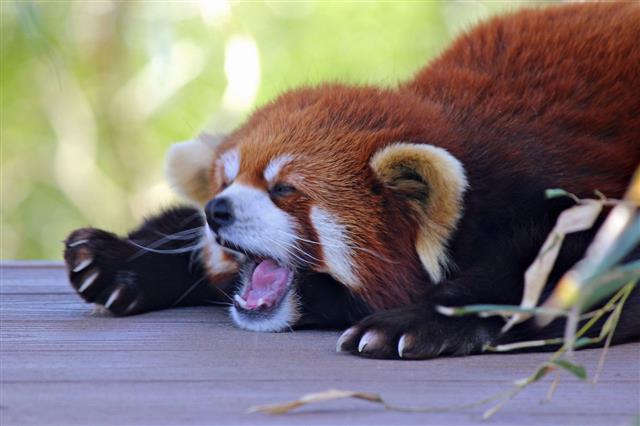 Red pandas have 38 strong teeth set in powerful jaws. Pandas are classified as carnivores and have sharp canines and incisors. However, the staple food of this animal is bamboo, a herbivorous diet. It has a peculiar teeth structure that is essential for tearing and chewing the plant. Front teeth are used for tearing while the molars at the back of the mouth are used for chewing. 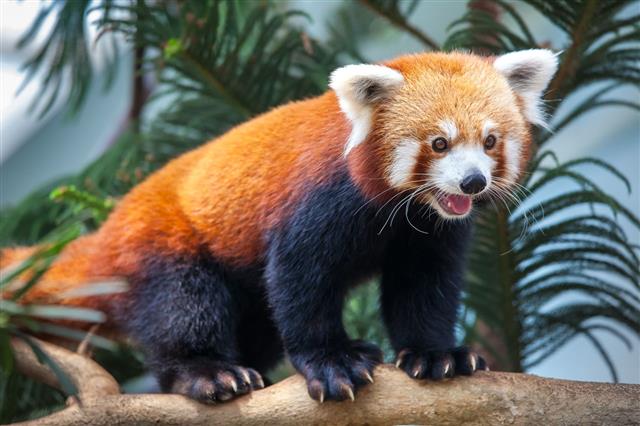 The feet of these pandas are coated with wooly fur to reduce heat loss and provide better grip while climbing wet branches. The claws are extremely sharp, semi-retractable, to make tree climbing easier and better. Similarly, when they are climbing down the tree, head first, red pandas can rotate their ankles to control their downward movement.

Forepaws help them hold the bamboo leaves and poles firmly while eating. The bone on the inner side of the paws acts as an extra thumb which helps in gripping tree trunks while climbing and to hold plant matter while eating. To drink water, they plunge their paw into the water and then lick. 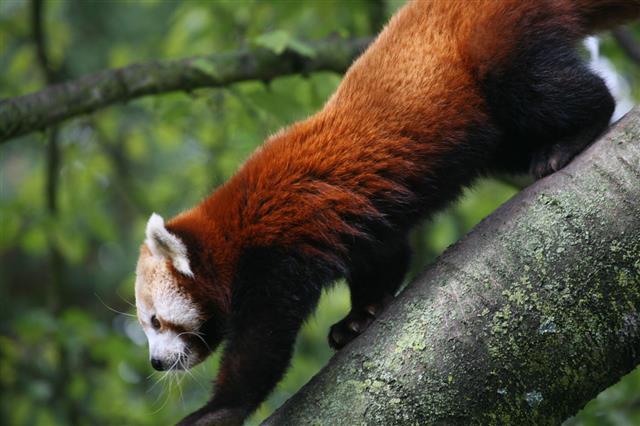 Beautiful reddish-brown fur coats the entire body with some variations in color shades, like red on the back and dark brown on the belly. The fur is very dense and gives warmth to the mammal. The tail is pretty thick and attractive with reddish-brown long fur alternating with rings of white fur. 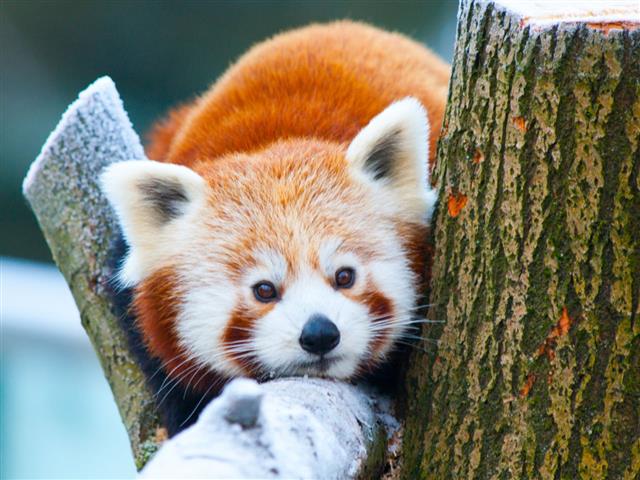 Male red pandas are solitary animals. Female red pandas lives with her cubs. Usually, winter is the mating season when pandas reproduce and then the male panda leaves the female. Overall, they prefer to be alone on tree branches or in large tree hollows. 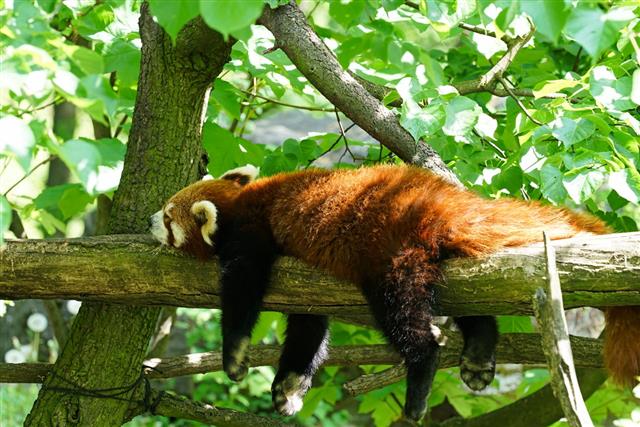 They sleep stretched out on tree branches with legs dangling during summer, and curl themselves covering their faces with their tails during winter. 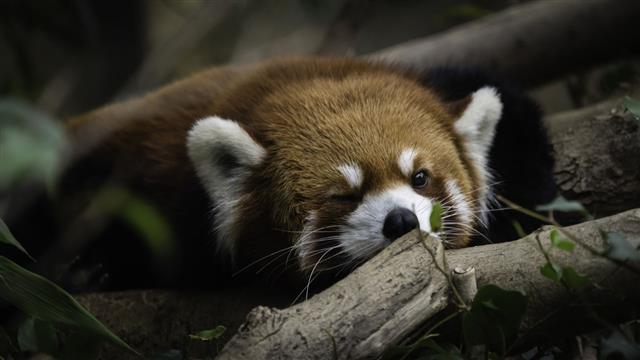 They feed at night, hence need not fear being spotted by predators, or competing with other animals who feed on the same food. Hence, they are also called nocturnal animals (mostly active at night).

Marking of the Territory 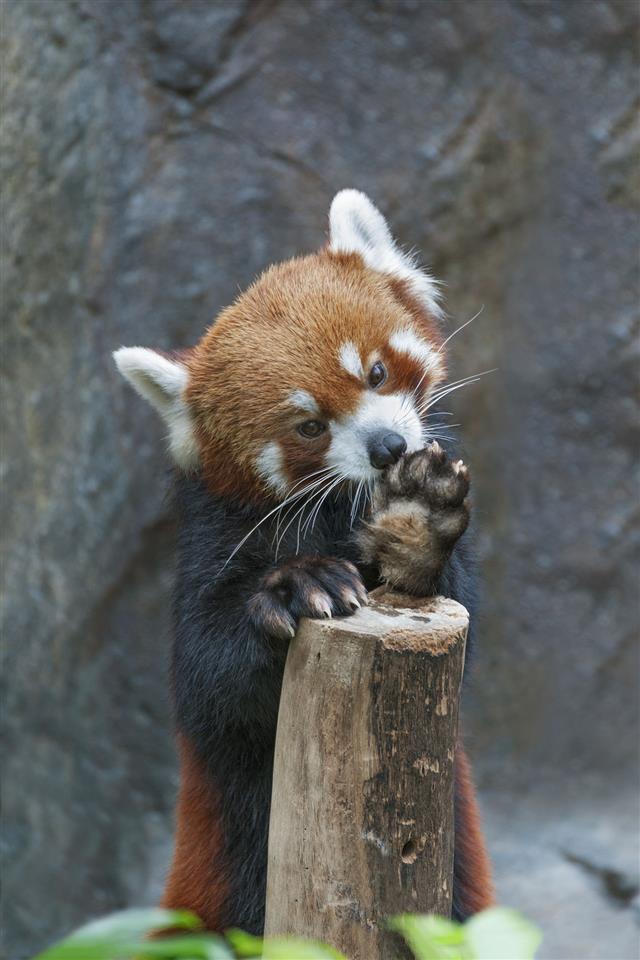 A red panda is a territorial animal. When it wakes up, it cleans its fur by licking its paws and rubbing its stomach, sides, and back against a rock or along the trees, and then examines its territory. To mark the territory, it uses a weak musk-smelling secretion and its urine. 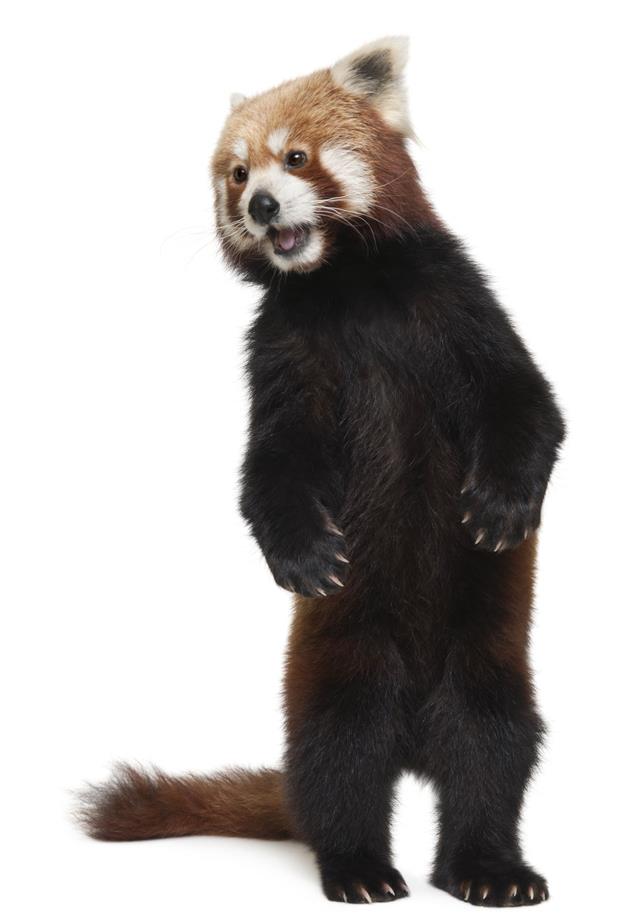 When a red panda senses danger, it tries to escape by climbing a tree or hiding in a tree hollow. However, if it cannot do so, it stands on its hind legs to make itself appear larger, and uses its sharp claws on its front paws to defend. 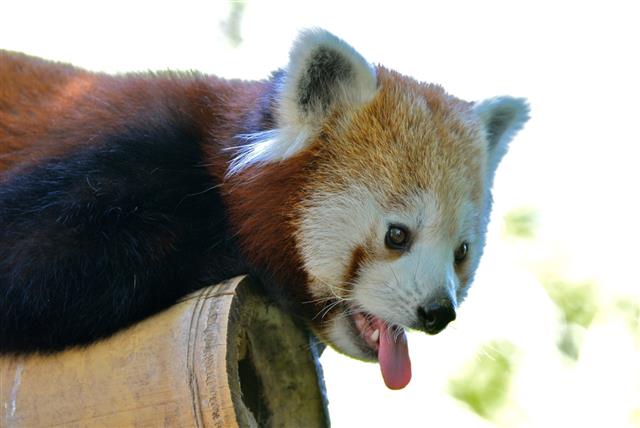 It communicates with a range of sounds like twitters, whistles, and hisses, including gestures like tail arching.

Forests are red panda’s habitat, if they are cut down these cute looking animals won’t be able to adapt well to other habitats. They depend on bamboo for the basic requirements of food and shelter. This part raccoon part bear might soon become extinct if the forests are cut down at the current rate. 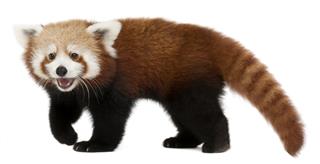 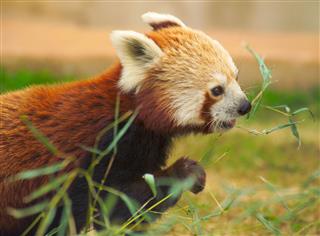 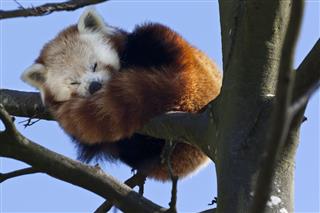 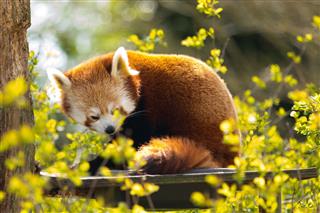 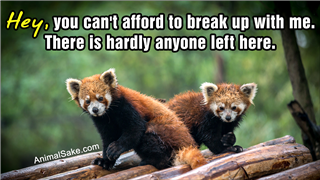