Spider monkeys are 'trapeze artists' of the jungle and can swing between trees at high speed, using their strong, prehensile tail. They are intelligent animals that carefully choose their trees to sleep in. They also show amazing fission-fusion foraging pattern...

Spider monkeys are ‘trapeze artists’ of the jungle and can swing between trees at high speed, using their strong, prehensile tail. They are intelligent animals that carefully choose their trees to sleep in. They also show amazing fission-fusion foraging pattern…

Spider monkeys are diurnal, which means they are active during the day. Every morning, these monkeys split into groups or troops (25-40), and go looking for their food. Days when food is not enough, they split into smaller groups (since trees have limited fruit). This is called fission-fusion foraging pattern.

Strongest tail in the animal kingdom

Spider monkeys possess a prehensile tail, which acts nothing less than a fifth limb. It is longer than the rest of the body and can measure around 90 cm in length. The tail is strong enough to support more than the animal’s body weight.

Spider monkeys choose special trees for their slumber. They sleep in the forks of branches, so that in case a predator comes at night, they will be alerted by the slightest movement. The monkeys gather together at the sleeping site at about dusk.

Who needs a thumb…?

Spider monkeys do not possess a thumb, and possess only four fingers which are curved to resemble a hook. This hook-like adaptation helps them grasp branches better. However, the absence of thumb is an adaptation, not an imperfection and facilitates grasping branches better. Since the thumb is absent, grooming is not full-fledged as seen in the case of other monkeys. They lack the presence of a thumb, but have four long fingers shaped like a hook.

Males have role in raising the young. The sole responsibility lies with the mother. The baby clings to the belly of the mother for about 4-5 months, and transferred to her back for another 6 months. The mother takes care till the baby attains 3 years of age. Fission-fusion foraging pattern enables them to change several groups. When these groups meet, spider monkeys greet each other with hugs. These hugs help to cool down any kind of aggression and maintain peace in the monkey community.

Spider monkeys bark when threatened. They bark in the direction of the threat, to warn others from going in that direction. They also break off branches and throw them down to scare off predators or intruders. They are also heard whining like horses, screaming, making sobbing noises, etc.

90% of a spider monkey’s diet, mainly comprises ripe fruits and seeds. Their tails help them suspend from branches and reach out for fruits. Spider monkeys are responsible for scattering seeds in the forest and are indirectly assisting in pollination. However, they also feed on leaves, nuts, flowers, bird’s eggs, insects and barks of trees.

Spider monkeys spend most of their time on trees. They prefer undisturbed high forests, where they will not only find enough food, but can also sleep in the forest canopy, without the fear of being attacked by predators. They use all four limbs and their strong tails to swing through trees. However, this does not mean they can’t move on the ground. They walk on the ground using their two legs. Their tail helps maintain balance while walking. 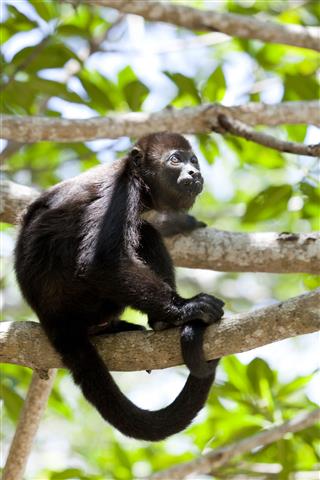 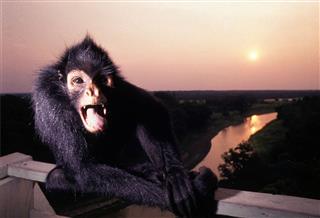 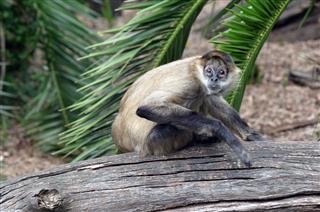