You are here: Home / Uncategorized / Tasmanian Devil Characteristics and Habitat

Australia, the result of the great continental drift, is home not only to the most diverse terrain, but also the most unique flora and fauna in the world. One of its exclusive and exquisite exhibits is the Tasmanian devil, a carnivorous marsupial. This animal resembles a small dog, with dark fur, and the ability to emit an awful odor when cornered. Its howl is very loud and disturbing, and it displays a devilish ferocity when feeding. They eats members of their own kind and smaller animals, and also act as scavengers in extreme situations. These are the main attributes that are responsible for the Tasmanian devil being named so. Today, it is endangered on account of a certain tumor-related disease that is affecting the surviving population.

The devil is Australia’s largest surviving marsupial. It has a unique appearance consisting of squat build, large head and a long fat tail. The animal stores all the body fat in its tail. The forelegs are slightly longer than the hind legs, enabling the animal to run at speeds of more than 12 km per hour. 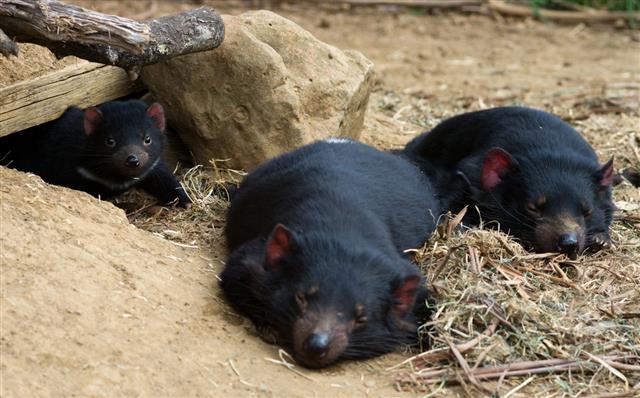 Its black fur is broken by white patches along the chest and rump region. Male Tasmanian devils are larger than the females. They grow to an average body length of 652 mm, of which 258 mm belongs to the tail. The animal exhibits an average body weight of 8 kg in males and 6 kg in females. The marsupial enjoys an average life expectancy of six years.

Devils are found in all parts of Tasmania. They are commonly spotted along the outskirts of urban areas, coastal woodlands and the sclerophyll forests. They thrives on trees, near water bodies, and on land. They generally do not form packs.

The devil preys on rats, carrion, wombats, sheep, birds, insects, fish and reptiles. It is able to detect prey even in the dark with the help of its long whiskers and the clumps on their heads.

When agitated, the devil rivals the skunk in the odor emitted. It has an excellent sense of hearing and smell. It displays the traits of nocturnal animals too, with an inherent ability to detect moving objects readily in the dark.

The devil has the strongest bite among all living mammals and has one set of teeth that grows throughout its life. Tasmanian devils commonly mate in the month of March. The twenty-one-day gestation period results in the birth of around 30 young devils. On an average, female Tasmanian devils survive more than the males.

Historically the Tasmanian devils were earlier extirpated, about 400 years ago, since they were viewed as threats to livestock. They were hunted extensively till 1941 and have only since been declared recipients of ‘official protection’.

The last century brought to the attention of conservationists and zoologists the recurrence of a facial tumor disease in these animals. This disease is responsible for a massive reduction in the Tasmanian devil population, as it interferes with feeding and leads to death through starvation.

Today, the populations are monitored not only to track and identify changes in the prevalence of this disease, but also to define the number of affected and healthy animals. The tumor significantly threatens the marsupial’s survival, categorizing the surviving population as ‘endangered’.