The theory of a two-headed snake seems to be more of a myth than reality, but evidence speaks of a different story. These creatures really do exist and make for a very captivating study. Read on...

You are here: Home / Uncategorized / Truth About the Two-headed Snake That’ll Leave You Feeling Unnerved

The theory of a two-headed snake seems to be more of a myth than reality, but evidence speaks of a different story. These creatures really do exist and make for a very captivating study. Read on…

In reality, two-headed snakes are conjoined twins (connected to the other either through the skin, organs, hips, or other body parts). Meaning, this kind of snake might be joined to the other and share some of the same organs, or might be separate and fully formed, with only a parasitic twin that has a separate head. It works with the same mechanism as that of human Siamese or conjoined twins, wherein a developing embryo splits and starts growing into identical twins, but stops midway without completing the process, therefore leaving the twins joined. At exactly which point the embryo stops separating, varies from one case to the other. Therefore, these snakes can be joined at varied places on their body.

It has been made possible to learn about these creatures by studying the specimens that have been found and captured. The life of most of these snakes is very difficult and confusing. In the case of a snake sharing the entire body but having separate heads, both the heads aren’t even aware of the existence of the other. The two heads live individual lives even while sharing a body. Therefore, it is often difficult when there is prey to be fed on. Which of the two heads will eat the prey often leads to a dangerous situation. Both the heads may find the prey but only one will succeed in eating it. This might result in fights and in the worst case scenario it may even lead to one head attacking the other. Since snakes depend on smell, the smell of the prey might also lead to an attack.

Another twist to the tale is when one head eats the prey, and the other head is deprived of it. It is rather amusing to contemplate the dilemma they face in sharing a body; because when one head eats, the other head feels full (since they share the same organs) but fails to understand the reason behind feeling full because in its opinion it hasn’t eaten anything.

Other than the feeding patterns, a two-headed snake has difficulties in the simplest of tasks, like which direction to go in. Since they have separate brains, it is quite possible that their brains will give them orders for two different directions. In such a case, one head will be dragged by the other. The head which is more dominant will do the bidding.

The most dangerous situation that this type of a snake can be in is when it is faced with an attack. In case of an attack, the instincts and senses need to be heightened for quick escape or counter attack, but in the case of this creature, it may get confused between the two heads. While one head might want to flee, the other might want to attack. In all this confusion, the snake may end up losing precious time which could prove to be fatal. Therefore the chances of a two-headed snake surviving in the wild are very slim.

In captivity, however, the snake might even live for 20 years or more.

There have been some rare two-headed snakes that have been displayed in zoos, and it has therefore been possible to study them. Some of the more famous ones are listed below.

This rat snake when found, was about as big as a pencil. It grew to be five feet long and was around 3.8 centimeters in girth. The snake was also a hermaphrodite (having both female and male heads), and an albino (the color pigment was missing). It was displayed at the city museum’s World Aquarium in St. Louis, Missouri. During its lifetime, breeding was attempted but failed. It lived for 8 years. This two-headed snake was bought and made a brand icon by the Nutra Pharma company with a motive of developing treatments with its venom.

This two-headed corn snake was kept at the San Diego Zoo in California. It lived for 20 years and had a progeny of 15 during its lifetime.

A two-headed snake has been found in Alicante, a village in Spain. It uses both its heads at the same time. Scientists are studying it to determine whether it has separate digestive tracts and if the theory of a dominant head exists.

Another snake was born in China, at the house of Mr. Liu who breeds snakes. It had 2 heads which could eat simultaneously. It was believed that the two heads were a result of genetic mutation. Several other snakes of this type have been found in many parts of the world like Sri Lanka, China, Honduras, United States, and Argentina.

A two-headed snake is an extremely fascinating creature―it is not a freak of nature. It cannot be relegated to being a supernatural evil force and be shunned or put to death. It deserves as much of a chance to live its life as do the rest of us. 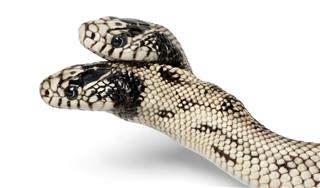