Introducing You to the 4 Types of Coyotes and Their Subspecies

Even though coyotes have descended from wolves, they are smaller than wolves but larger than foxes. They have been classified on the basis of their geographical habitat. This AnimalSake article gives you information about the types of coyotes with pictures.

You are here: Home / Uncategorized / Introducing You to the 4 Types of Coyotes and Their Subspecies

Even though coyotes have descended from wolves, they are smaller than wolves but larger than foxes. They have been classified on the basis of their geographical habitat. This AnimalSake article gives you information about the types of coyotes with pictures. 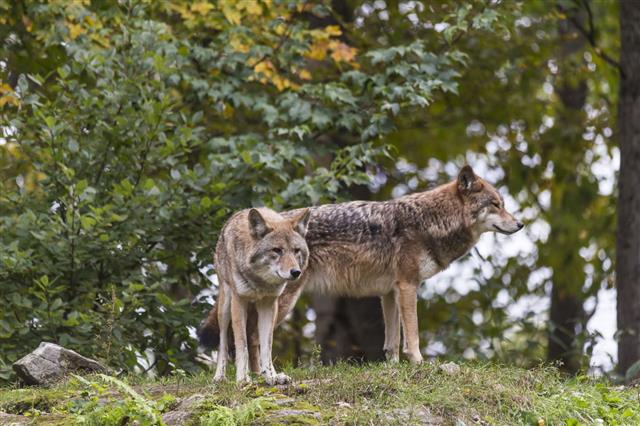 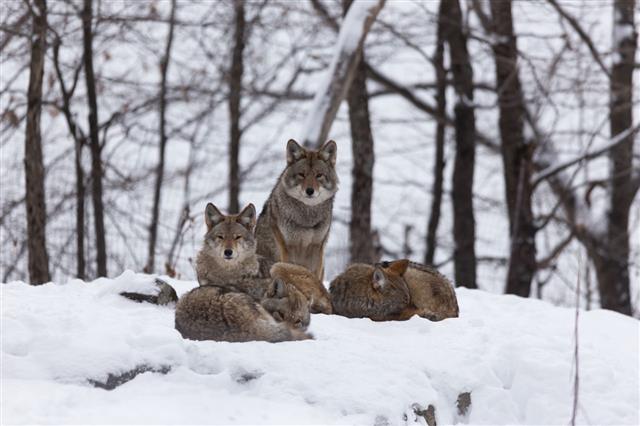 Fame of the Wild!

A tame coyote, “Butch” appeared in films like “Smoky” and “Ramrod”in 1946-47. Sadly, it was shot when it was trying to steal from a henhouse.

Coyotes (Canis latrans) belong to the family Canidae, which also includes dogs, wolves, and foxes. It is native to North America and is found right from the northern part of Canada to Central America. It has a huge population and so is listed as “Least Concern” by the IUCN. They resemble in appearance to wolves but can be distinguished by the length of the ears and shape of the muzzle. Coyotes have longer ears, a deep muzzle, thin legs, and are smaller than wolves.

Coyotes can also be distinguished from foxes. Foxes are small and have a typical orange-golden color. But, coyotes are totally different and are observed in a variety of coat colors.

Coyotes are distinguished into 4 types based on their distribution as mentioned above, and have very few physical differences to distinguish them from each other. Their coat colors come in mixtures of gray, white, black, and brown. The only point of differentiation is in their regional distribution. Let’s get some more information about these types.

Central U.S. coyotes include four subspecies which are found in the central states of North America.

The Plains coyote is found in the plains of central Canada, Alberta, Oklahoma, and Texas. It is the largest among the four and has a pale coat.

The Texas Plains coyote is found in western Texas and the eastern parts of New Mexico. It has a bright and thick fur coat and small ears.

The Mearns’ coyote is found in Arizona, Chihuahua, New Mexico, and in parts of northern Mexico. It has a small skull and teeth but a bright-colored fur, especially around the feet.

The Lower Rio Grande coyote is found in southern Texas and northern Tamaulipas. It has dark fur and the belly has scattered black-tipped hair.

The eastern coyotes include only two subspecies found in the eastern part of North America.

The northeastern coyote is found in Saskatchewan, Ontario, Indiana, and Missouri. It has a dark-colored coat and also a broad skull and large teeth.

The southeastern coyote is found in the southeastern regions of Kansas, Texas, Missouri, and Arkansas. It is quite large and also may have a tinge of red in its coat. It has short ears, but has a long muzzle.

The western coyotes include six subspecies which are found in the western part of North America.

The Six subspecies are:

The northern coyote is found from central Canada to Alaska. It is a medium-sized subspecies and has cinnamon-colored fur.

The mountain coyote is found in northwestern states like Washington and Canada to the southern part of Alaska. It has a large tail and long ears.

The northwest coast coyote is found in the coastal regions of Oregon and Washington. It is a small-sized subspecies with dark and rufous-tinged fur.

The California valley coyote is found in Sierra Nevada. It is small and dark-colored, and has large ears but smaller teeth and skull.

The San Pedro Martir coyote is found in the northern part of Baja California and southwest California. It is small in size, has reddish fur, and a broad skull.

The peninsula coyote is found in Baja California. It has dark and reddish fur. This species also has many black-tipped hair on its belly.

The Durango coyote is found in Sonora, Chihuahua, Durango, and Sinaloa. It may have a reddish coat and is a large subspecies.

The Mexican coyote is found in states like Oaxaca, Puebla, and Veracruz of Mexico. It has a reddish coat, short ears, large teeth, and a broad muzzle.

The Colima coyote is found in Jalisco, Guerrero, the coastal regions of Mexico. It has a dark-colored coat and the legs have black markings or color patches.

The Salvador coyote is found in Cerro Mogote and southern Panama.

Due to their wide distribution, the coyotes habitat and feeding habits are different too. Their diet ranges from rodents, birds, snakes, and fish to fruits and vegetables. Unlike other animals, they attack their prey from the front, or may pounce on rodents or chase squirrels. Coyotes live mainly in nuclear families (one female at least). Though they are known to live in large groups as well and hunt huge preys in packs. They are monogamous in nature.

The female chooses a male, they bond for 2 – 3 months, and then they start marking their territory. The male hunts and gets food for the female till the gestation period of around 63 days. The female gives birth to an average of six pups. The pups are totally dependent on the parents, in the early stages. Coyotes have only a few predators which include humans, cougars, and wolves.

This helps to control the over-population in some areas, but the coyotes are quite high in numbers so it hardly affects their population.