Water spider or Argyroneta aquatica is a spider species that spends its life underwater. This spider builds an underwater web structure and fills it with air bubbles to make a diving bell, where it lives, molts, mates, and brings up its offspring.

You are here: Home / Uncategorized / Things You Might Not Know About Water Spiders 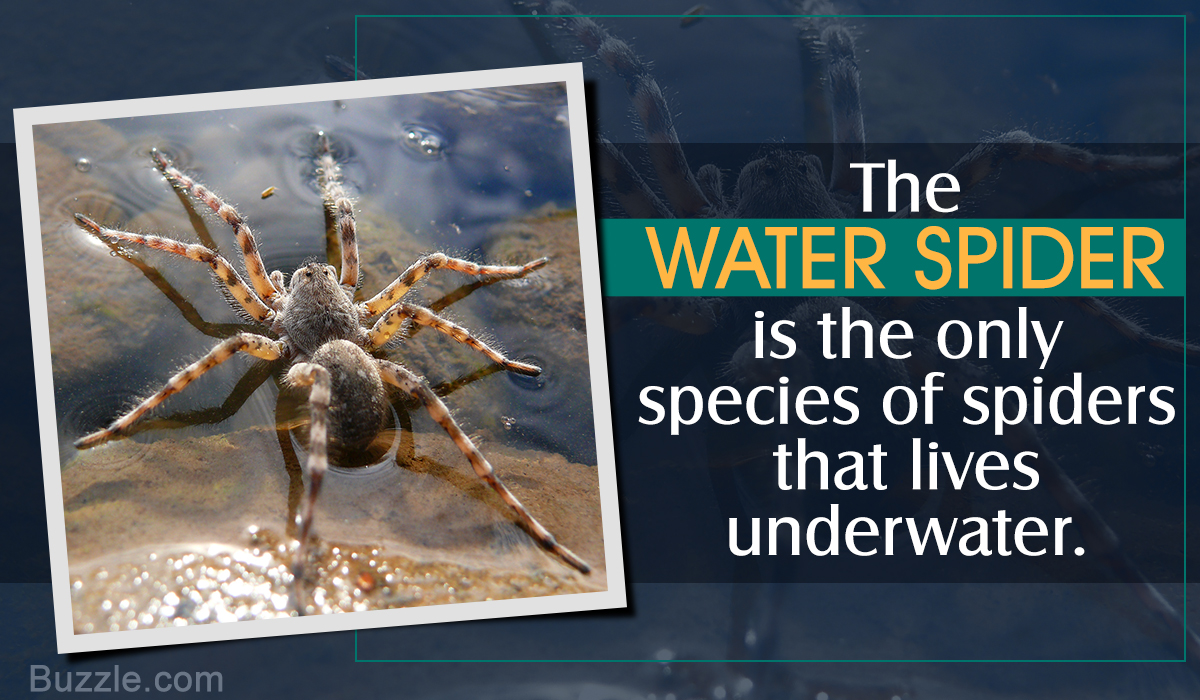 Water spider or Argyroneta aquatica is a spider species that spends its life underwater. This spider builds an underwater web structure and fills it with air bubbles to make a diving bell, where it lives, molts, mates, and brings up its offspring.

Water spider, also known as diving bell spider, is the only spider that lives underwater. The reason for this adaptation may be the tough competition on land and the presence of terrestrial predators. Whatever may be the actual reason, this spider lives in water and makes an underwater structure for this purpose, known as ‘diving bell’, which helps the spider breathe underwater.

However, the diving bell serves several other purposes and helps the spider survive in water. The scientific name of this spider is Argyroneta aquatica. One common subspecies of Argyroneta aquatica is the Japanese water spider. The only difference between these two sub-species is that the genital organs of the Japanese water spiders are larger than their European counterparts.

They are usually small spiders with light to dark brown-colored cephalothorax and a dark velvety abdomen. Their average size is about 10 to 15 mm. Water spiders are unique in the sense that the males are usually larger than the females, unlike other spider species. The male water spider can grow to 7.8 to 18.7 mm in length, while the female spider can be 7.8 to 13.1 mm long. A possible explanation about the larger size of the male spiders can be their more active hunting style, which requires greater motility and physical strength to overcome water resistance. The females, on the other hand, spend most of the time in building and maintaining their large bells.

Though water spiders survive on water, they do not possess any gill. Instead, they have a unique way of breathing. Their legs and abdomen are covered with small hair, with which they trap air bubbles. This trapped air around the body gives the spider a silvery appearance, when it is underwater. The spider breathes from this bubble and so, carries it to the underwater web structure, spun with silk. The spider weaves dome-shaped web among underwater plants and fill it with air bubbles, collected from the surface of the water. This makes the web structure to take a bell shape, which is why it is called a diving bell. This diving bell serves as an external gill for water spiders.

Oxygen from the surrounding water diffuses in to the bell through the silk membrane, while carbon dioxide diffuses out. This is the reason why, the spiders do not have come to the surface frequently to replenish the air supplies of the diving bell, from which they breath. However, they have to come to the surface once in a while for this purpose, whenever the concentration of oxygen becomes too low, or the concentration of carbon dioxide increases. Both the male and the female build such air bells, though the size of the bell made by the male is usually smaller than the one built by the female. Males also replenish the oxygen levels of their bells less frequently than the females. The water spiders breathe through small openings, located under the abdomen. These openings are connected to their lung-like organ.

They inhabit freshwater lakes and ponds, marshes, swamps, slow-moving streams, mainly in the regions of central and northern Europe, through Siberia and Central Asia. The subspecies Argyroneta aquatica japonica or Japanese water spider can be found in Japan. These spiders are good swimmers, and they carry air on the fine hair of the abdomen while swimming. Usually male water spiders are better swimmers and more aggressive hunters than the females.

The diet of these spiders consists of aquatic insects and crustaceans. Water mites, mayfly nymphs, and phantom midge larvae, are some of the common food sources of water or diving-bell spiders. They possess strong fangs and their bite can be quite painful. They usually use their venomous jaws for immobilizing the prey. For catching a prey, they come out of the bell, but then again return to the underwater retreat to digest the food. Water spiders themselves fall prey to fish and frogs at times. The male spiders are more active during the day, while the females and the juvenile spiders are more active in the night.

Unlike other spiders, male water spider is usually larger than the female. Before mating, the male usually builds a diving bell near the diving bell of the female. A tunnel is also constructed by the male from his bell to that of the female, in order to enter the female’s bell. It is the female’s bell, where mating takes place, after which the female lays about 30 to 70 eggs in her bell. Usually, the female spider makes a special chamber in her bell to deposit the eggs. After hatching, the young spiders do not make their own shelters or bells immediately. Instead, they fill up the empty shells of snails or other similar structures with air, and use them as shelter for some time.

Like other spiders, they too molt or shed their skin, and for this purpose they often come out of the water to the adjoining vegetation. But many times, they prefer to construct a new bubble, specifically for molting. Water spiders hibernate during the cold winter and for this purpose, they goes deeper into the water and build sturdy diving bells and seal off the bells with silk. The spiders then remain in their diving bells until the water warms up.

The average life span of water spiders is about 2 years. The fangs of water spiders can pierce the human skin, and its bite can cause inflammation and also produce feverishness. The most interesting fact about these spiders is the air bells that they construct. These air bells serve a number of purposes. These spiders literally live, consume their prey, molt, mate, and also lay eggs, and raise their offspring safely within these bells, and thus avoid their terrestrial predators.