What Do Alligators Eat? It’s Not What You Imagined

An alligator's jaw is so powerful that it can easily catch a prey weighing more than 900 kg and snap its neck in just one crushing bite. This article provides more information about the alligators' eating habits.

You are here: Home / Uncategorized / What Do Alligators Eat? It’s Not What You Imagined

An alligator’s jaw is so powerful that it can easily catch a prey weighing more than 900 kg and snap its neck in just one crushing bite. This article provides more information about the alligators’ eating habits.

Alligators and their cousins, the crocodiles, have successfully adapted to the changing ecological conditions. They have remained almost unchanged since the time they arrived on this earth, about 200 million years ago. The name ‘Alligator’ is derived from the Spanish name el lagarto, which means ‘lizard’. The American alligator and the Chinese alligator are the only two surviving species on earth. When dinosaurs wandered freely on earth, alligators were also present. Hence, they are often referred to as ‘living fossils’. 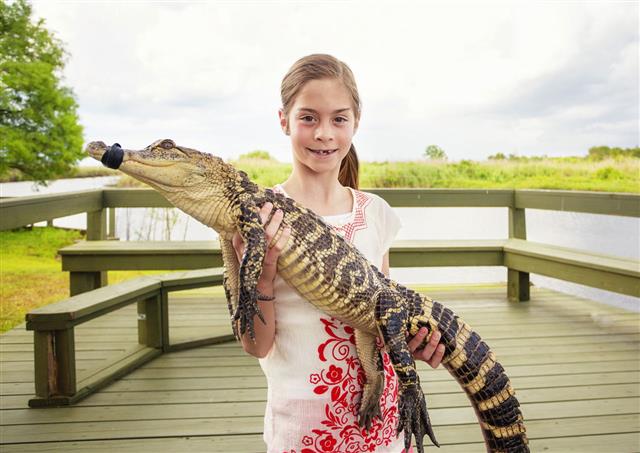 One of the interesting facts about alligators is that in zoos, they may live up to 75 years but in the wild, their average lifespan is about 50 years. Large alligators prefer to live alone while smaller ones live in large numbers close to each other. These cold-blooded animals are known for their bone-crushing bite. They have around 75 teeth. They are about 13-17 feet long and may weigh around 350-450 kg. Obviously, they have a large appetite. Their eating habits are given below. 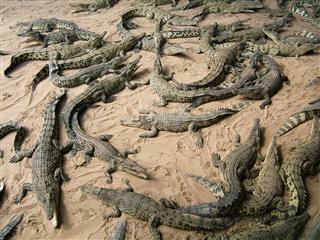 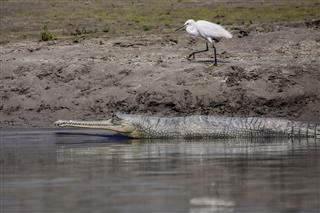 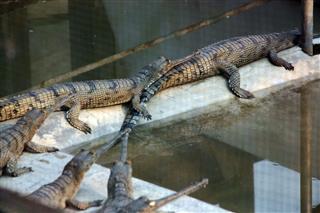 American alligators are found in a freshwater environment. Ponds, marshes, bogs, wetlands, rivers, lakes, swamps, and brackish lagoons are their favorite dwelling places. Young alligators enjoy eating small fish, insects, tadpoles, frogs, and snails. They like to eat crustaceans and worms as well. They gradually learn to catch larger prey. As they grow, they start eating larger fish such as gar, turtles, various mammals, birds, deer, and snakes and other reptiles. They often swallow stones, which helps them dive deep into the water. Large alligators like to eat small animals which they can kill easily. Their powerful jaws help them eat smaller animals with a single bite. They may even ingest a dead animal if they don’t get anything else to eat. Large alligators can eat smaller alligators as well. Razorbacks and deer are their favorite food. In Florida, there were cases of alligators eating watchdogs, panthers, and black bears.

Alligators wander in search of prey at dusk or at night. They lay motionless for hours, catch the prey instantly with startling speed, and swallow it whole. Actually, they are not hunters, they are lurkers. Their skin sensors help them detect anything entering into the water. They keep only their eyes and nostrils above the waterline. It seems that they select their prey by its size. They can crush the shells of turtles or bones of animals very easily. They have very strong tails which help them propel up to 5 feet out of water. They can thus catch small animals from low-hanging tree branches. When they catch a larger prey, they hold it tightly in their powerful jaws and drag it into the water to drown. They may hide the remaining food (if they cannot finish it in one bite) and allow it to rot. They may eat it by spinning it fiercely until bite-size chunks are torn off. This is known as ‘death roll’.

Alligators don’t have to eat very often. They are cold-blooded animals, and eating once in a week is sufficient for them. Excess calories are stored in the form of fat under the tail. Surprisingly, an alligator can thrive without eating anything for two years. It is a shame that only a few dozen Chinese alligators are left in the wild now. They are included in the list of extremely endangered species. Since human beings are encroaching onto the alligators’ natural habitat, contact between people and alligators has significantly increased during the last few years. An alligator attacks only when it feels that its life is in danger. Unlike the large crocodile, it does not consider human beings as its enemies. Being timid, it walks or swims away at the sight of human beings, but it may attack in self-defense if provoked.

Now that you know what alligators eat in the wild, you must have realized how important it is to save their habitat. In some areas, people kill them for their meat and skin. Their skin is used to make bags and shoes. In fact, it is our duty to save both, the alligators and their habitat. You can always try in your own small way to make some difference and save these important animals from extinction. 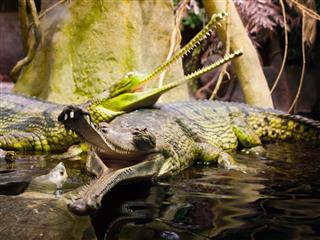 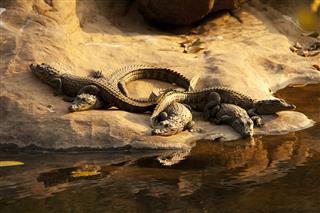