What do Cheetahs Eat

Once roaming freely around the world, cheetahs are now fast becoming an endangered species. Here, we try to shed some light on the world of the fastest land animal, what do they eat and drink, where do they live, and also provide you with some interesting cheetah facts.

You are here: Home / Uncategorized / What do Cheetahs Eat 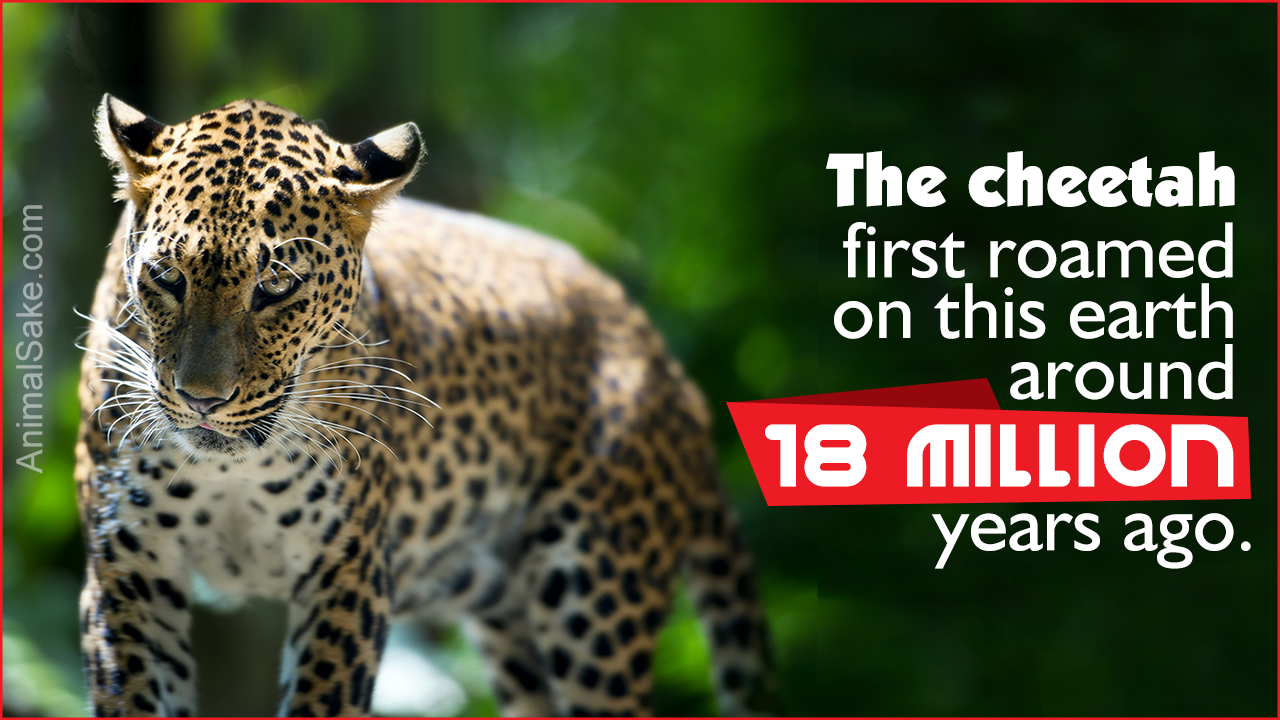 Once roaming freely around the world, cheetahs are now fast becoming an endangered species. Here, we try to shed some light on the world of the fastest land animal, what do they eat and drink, where do they live, and also provide you with some interesting cheetah facts. 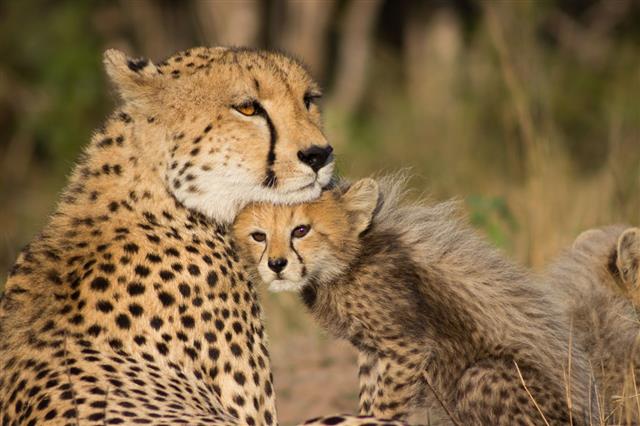 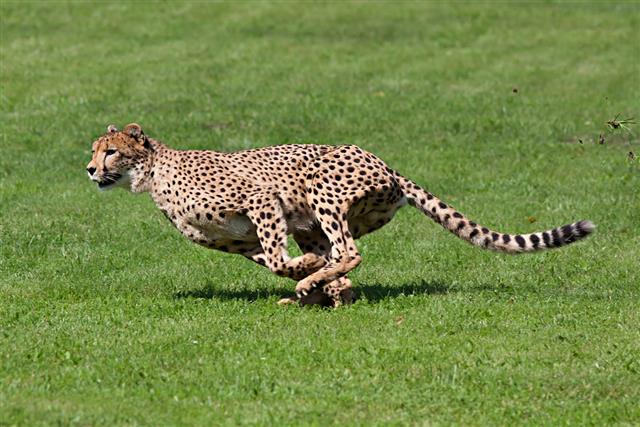 One of the four super cats to roam this earth, the cheetah (Acinonyx jubatus), though a member of the cat family (Felidae) is uniquely different from the rest of the cats. Cheetahs are known for their phenomenal speed, but lack the climbing abilities present in other cats. This species is the sole surviving member of the genus Acinonyx. It is considered to be the fastest land animal, clocking speeds of up to 75 mph (120 km/h), though it can achieve this in short bursts and over short distances only. This animal can accelerate from 0 to 60 mph (103 km/h) in three seconds flat, faster than most supercars!

The cheetah is different from other cats in the way that it has longer legs and a leaner body. It is also known as the “greyhound” of the cats. Primarily, it is not an aggressive, but rather a shy animal, preferring flight rather than fight. It has weak jaws and rather small teeth for a carnivorous cat, that’s the price it has paid for attaining speed. The cheetah can run and catch almost any prey but cannot fight larger predators, or protect its kills or young cubs. The distinct features of the cheetah are the long tear-drop shaped lines on both sides of the nose running from the corner of the eyes to the mouth. The cheetah has black spots measuring from ¾ to 1 ¼ inches on a tan or buff-colored coat. There are spots on the tail which merge to form four to six dark rings but no spots on its white belly. The cheetah is also one of the oldest cats around, having first roamed on this earth an astonishing 18 million years ago!! Phew… now that’s what I call really old.

The cheetah is found, or rather was found, widely in the whole of Africa and South Western Asia. Loss of habitat and prey besides hunting has led to rapid decline in the cheetah population and unfortunately it has all but vanished from Asia and most of Africa, rendering it a vulnerable species and could soon end up on the endangered animals list. The cheetah thrives where prey is abundant and where there are vast expanses of land. It prefers to live in an open area of uniform environmental conditions for flora and fauna such as grasslands or semi-desert areas and thick brush wastelands, though it can also be found in diverse habitats such as dense vegetation and hilly terrain. Let’s look at their diet and other eating habits.

What do Cheetahs Eat and Drink

Cheetahs like the other big cats – lions, panthers, jaguars and leopards are carnivores surviving in the wild, which means they eat meat, more meat and some more meat. A simple glance at the design of cheetahs’ teeth and you will realize that the large canines are for holding and ripping meat from a carcass, razor-sharp incisors for snipping slicing and shearing meat. Alright, I agree this all is getting a bit too graphic. The cheetah eats mostly mammals under 40 kg (88 lb), including deer and antelope like the Thomson’s and Grant’s gazelle, the Springbok and the impalas. The young ones of larger mammals such as zebras and wildebeests. When the cats hunt in groups, even adult mammals fall prey. In times of scarcity and hunger, warthogs hares and guinea-fowl are also on their menu. A unique feature about the cheetah is that it is a diurnal hunter which means, unlike other big cats, it hunts early in the morning or later in the evening. As for what do cheetahs drink, well nobody has, as of now, seen them drinking anything besides water. So we can safely say that a cheetah drinks water like all other wild cats.

Typically, cheetahs can go two or more days between successive kills, but females with young cubs will try to take hunt at least one gazelle a day. They differ from other cats in their method of hunting as they don’t ambush or sneak within springing distance. Cheetahs rely on their vision for hunting rather than scent. The unfortunate prey is stalked to within 10 – 30m. Then, suddenly, they charge all out. If they overtake their victim, they bowl it over and strangle it with a bite to the neck. But their prey often escapes. The whole spectacle, yes it is quite a spectacle though brutal as it may sound, is over in less than a minute. If the cheetah fails to hunt the prey quickly, it will give up. The cheetah has an average success rate of about 30%, seven out of ten chases result in failure. Cheetahs look for animals who have drifted some distance from their pack or group, and do not seek out old or weak ones as is the case with other predators.

Cheetahs are beautiful animals and an important part of the food chain, they must be protected. It is the responsibility of us humans to do whatever can be done to make sure this species survives. The world of the smallest yet most magnificent animal of the feline family is fast shrinking. Come, let us try to help this beautiful creation of God by doing our bit, that is to spread awareness. 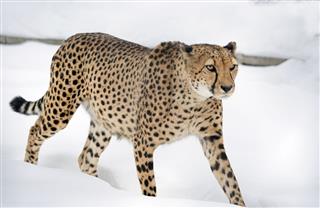 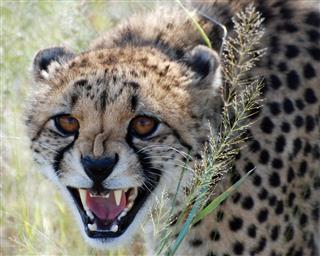 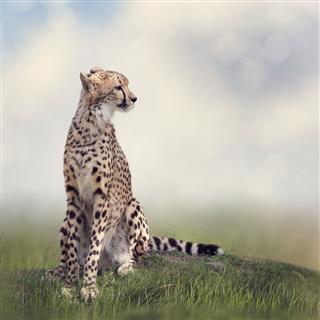 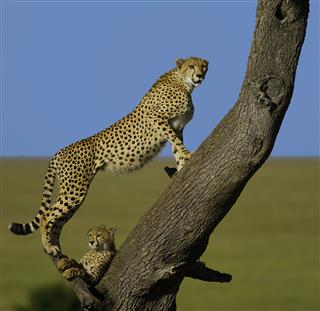