A List of Popular Types of Jellyfish with Pictures

Jellyfish are mysterious creatures of the oceans, the alien-like look fascinates and evokes curiosity in everyone. Here, we shed some light on different jellyfish types and their characteristics which make them unique among all marine creatures on Earth.

You are here: Home / Uncategorized / A List of Popular Types of Jellyfish with Pictures 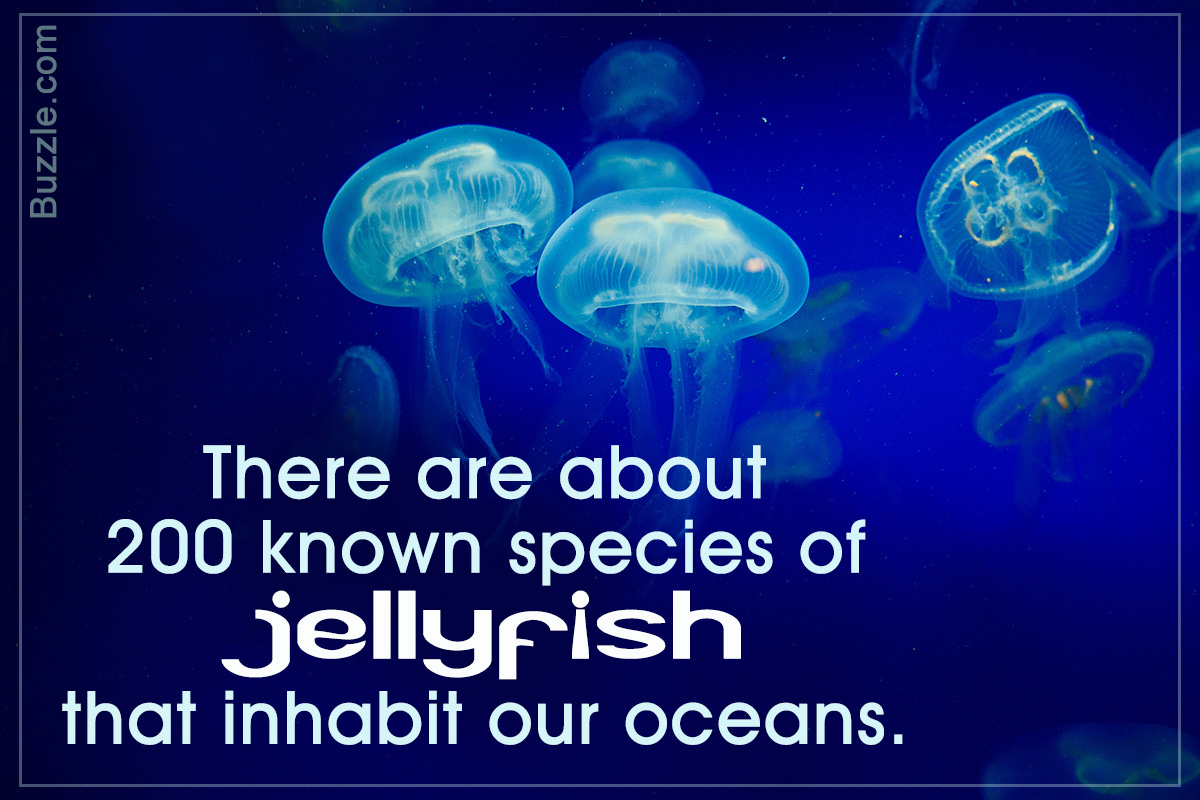 Jellyfish are mysterious creatures of the oceans, the alien-like look fascinates and evokes curiosity in everyone. Here, we shed some light on different jellyfish types and their characteristics which make them unique among all marine creatures on Earth.

… that the Portuguese Man O’ War (Physalia physalis) is usually mistaken to be a jellyfish because of its appearance. But the truth is that this highly venomous creature is a siphonophore, an animal made up of a colony of organisms working together.

Jellyfish are believed to have existed on Earth even before the dinosaurs, which makes them one of the oldest surviving species among marine creatures. Their lifespan can vary from as little as a few days to about a year. Jellyfish sting their prey using tentacles that have specialized cells known as cnidocytes. Contact with a jellyfish tentacle can trigger millions of cnidocytes to pierce the skin and inject venom. However, only the venom of few species cause an adverse reaction in humans.

Every ocean in the world is home to millions of jellyfish who are known to survive in all depths of water, right from coral sea beds to the deep bottom of oceans. They can be found in different sizes, varying from some as small as your thumbnail, to some as large as humans and even bigger. Jellyfish use their venom to stun their prey, so that it doesn’t struggle and damage its delicate tentacles. Jellyfish don’t have a brain, heart, bones, or eyes. They have an incomplete digestive system, meaning that they use the same opening for food intake and discarding waste. Jellyfish hunt passively using their tentacles as nets, their diet includes plankton, crustaceans, fish eggs, small fish and other jellyfish. Jellyfish have limited control over their movement and mostly free-float, as jellyfish squirt water from their mouths they are propelled forward.

This is the family of true jellyfish. There are about 20 known species in this family, the most popular one being Lion’s mane jellyfish.

There are 3 known species in this family. All the species are mostly found in the Atlantic Ocean and Mediterranean Sea. Genus Drymonema was a part of Cyaneidae family, but it has been moved to this family.

This family has only one genus containing 2 species. They are mostly found in West Atlantic and Pacific oceans. Cannonball jellyfish (Stomolophus meleagris) is a well-known species from this family.

There are at least 18 species in this family. The most popular species being Moon jellyfish. The family also has rare species like Stygiomedusa gigantea. This rare creature has only been sighted 114 times in the last 110 years and is believed to be one of the largest invertebrate predators in the deep-sea ecosystem.

This is the most common species in the world and can be identified by the four horseshoe-shaped gonads that can be seen through the top of the bell. The size ranges between 6 and 20 inches. They mainly feed on plankton and rely on currents for drifting as they have limited locomotion.

The name is derived from its resemblance to a cannonball. This type of jellyfish can be easily identified as they have white bells at the bottom that are surrounded by a ring of purple or brown pigment. Its size ranges between 8-10 inches. They mainly feed zooplankton. Another common name given to the species is Cabbage Head Jellyfish. 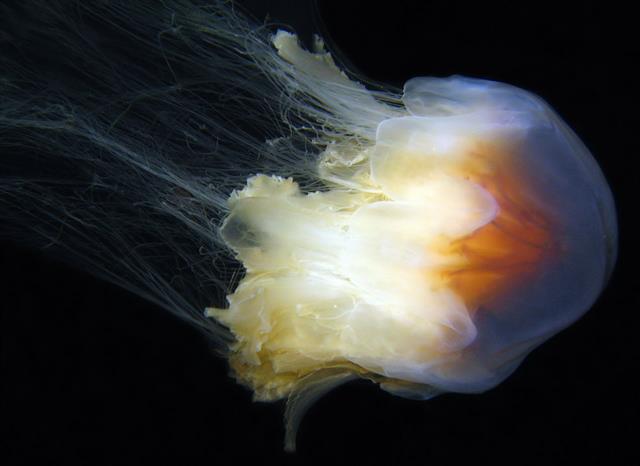 Lion’s mane jellyfish is the largest known species of jellyfish. They are distinguished by a saucer-like shape on the top and tentacles hanging below as thick as a lion’s mane. Found in the freezing waters of the Arctic ocean and the Northern Pacific Ocean, they are known to survive in the coldest weather conditions. The largest recorded specimen was about 8 feet in diameter and about 150 feet long. Even though their stings are not known to be fatal, it can lead to temporary pain and redness in the area of contact.

These jellyfish are found in tropical and subtropical parts of the Atlantic and Indo-Pacific oceans. The body size varies from 6-8 inches and tentacles may grow up to 6 feet long, they are smaller than the Pacific sea nettle species. Atlantic sea nettle is distinguished by the reddish-brown stripes that run along the head. The sting is not lethal but leaves a painful rash.

Also known as Blue Blubber jellyfish, this species of jellyfish are distinguished by their large bells and translucent oral arms which range from 4 to 8 in number. They use these arms to capture and ingest their food. Blue Blubber stuns its prey using the venomous tentacles. However, this sting is not fatal to humans. It may cause minor rash or itchiness in the area of contact.

This species of jellyfish has an ability to glow in the dark. In Latin, nocti  means night and luca stands for light. Roughly the size of a golf ball, these are known to survive in warm and temperate waters of Mediterranean Sea, Red Sea and Atlantic Ocean. Their stings are slightly painful, but is limited to only a small period of time and does not cause much harm.

Also known as Bluefire jellyfish, these have a blue or yellow color tone and grow to approximately 10 to 20 cm in length. They are mainly found off the west coast of Scotland, the North Sea and the Irish Sea.

Irukandji Jellyfish is extremely tiny and extremely venomous species of jellyfish. If left untreated, the sting can lead to cardiac arrest. The bell of this species grows only up to 5 to 10 millimeters and tentacles are a few centimeters to 1 meter in length. They are usually found in warmer waters near the coast.

Sea wasp is a species of Box jellyfish, it is the most lethal jellyfish in the world. Mostly found in the coastal waters of Northern Australia and New Guinea, this species has venomous tentacles up to 3 meters (9.8 ft) long. At least 63 deaths due to sea wasp encounters have been recorded in Australia. The sting results in excruciating pain and, if left untreated, the victim can die within 3 minutes.

This species has a very strange attribute of going back to its juvenile stage after attaining sexual maturity. Scientists believe that this species can turn back its life cycle indefinitely, thus making them immortal. Originally from the Caribbean, this 5 millimeter long creature has steady population across the world, attracting the curiosity of experts all over.

Often mistaken for a sea anemone, Upside-down jellyfish lives in mud flats, shallow lagoons, and around mangroves. They can measure up to 300 mm wide. Cassiopea andromeda is carnivorous and eats small animals. The stinging cells, or nematocysts, cover its tentacles and are used for feeding or defending. This jellyfish is fairly venomous, contact may result in pain, rash, swelling and vomiting.

Also known as the box jelly due to its cube-shaped bell or Chironex Fleckeri, it is one of the most venomous species of jellyfish in the world. The tentacles can inflict an extremely painful sting on contact. Apart from pain, the sting may also lead to cardiac dysfunction and respiratory depression, which can be fatal. They grow to about 5 inches in diameter and the tentacles can be 3 to 4 meters (9.8 to 13 ft) long.

There are more than 1500 types of jellyfish that have been identified, yet experts believe that there are many more species that are still not known. While jellyfish do not have eyes or a visible brain, these beautiful creatures have a strong nervous system that can detect light, odor and external stimuli that generates appropriate response, thus making them mysterious and intimidating in many ways. 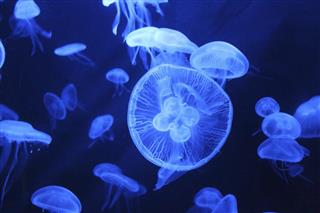 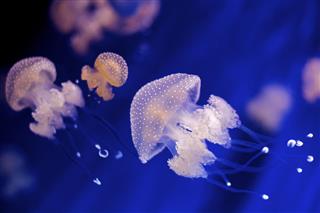 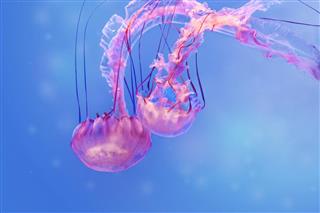 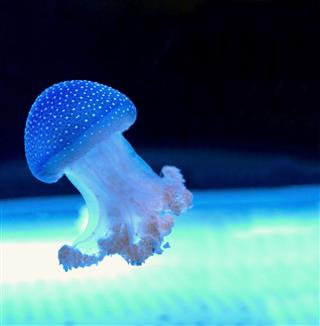 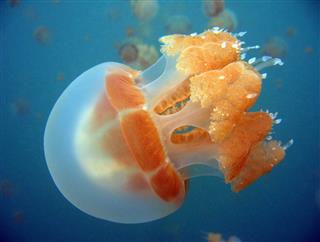 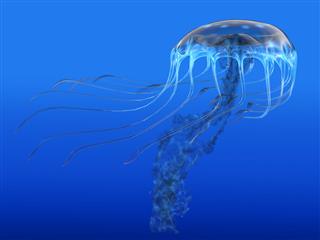 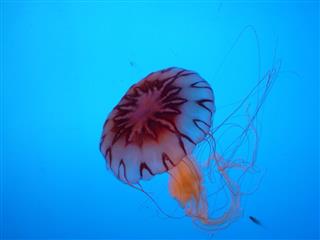 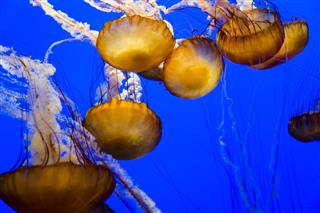 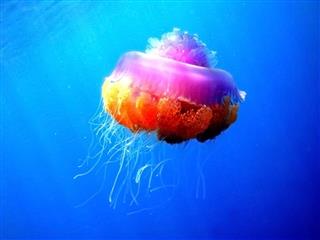 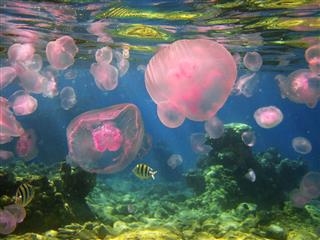 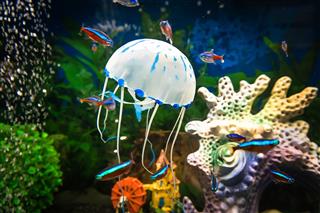