Facts About White Tigers That Will Take Your Breath Away

You might have seen mobile or desktop wallpapers of the majestic white tigers. But did you know, they are susceptible to postural problems and weak immune system, despite being the second largest species of Tiger?

You are here: Home / Uncategorized / Facts About White Tigers That Will Take Your Breath Away

You might have seen mobile or desktop wallpapers of the majestic white tigers. But did you know, they are susceptible to postural problems and weak immune system, despite being the second largest species of Tiger? 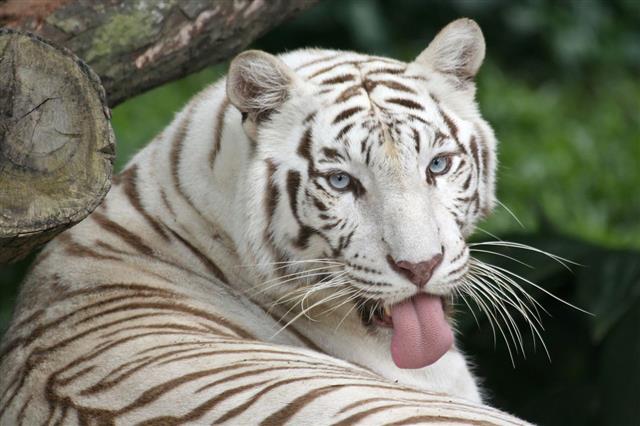 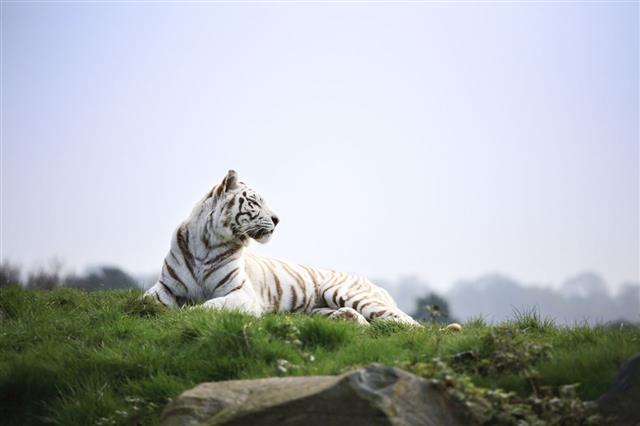 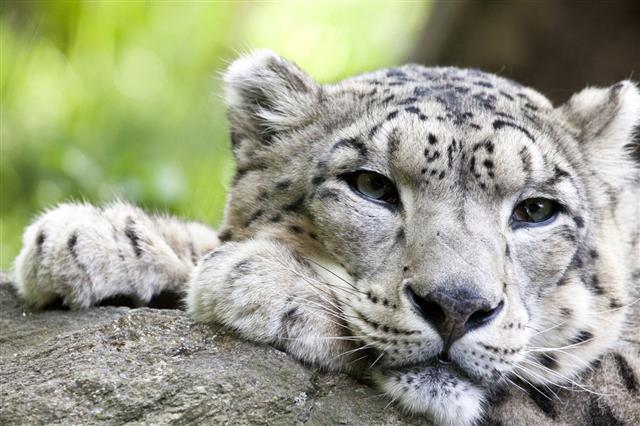 The white tiger is almost the same size as the Bengal tiger. Therefore, it is the second largest cat in the world, next to only the Siberian tiger.

White tigers possess a recessive gene responsible for their characteristic white color. A single recessive gene cannot produce white fur in tigers. In fact, it requires two such genes received from both the parents for the fur to be white. White tigers are of the same species as their orange counterparts. Also, white tigers are not albinos. These tigers should not be confused with snow tigers too; snow tigers, unlike white tigers don’t have stripes on their skin coat.

There are many misconceptions among people about white tigers. The facts presented below should throw light on some of the interesting details about these tigers.

The few Siberian tigers which possess a white skin coat are those born as a result of breeding with Bengal tigers.

The white recessive gene responsible for pale fur in white tigers is phenotypically expressed in the wild, once in 10,000 births.

The white recessive gene responsible for pale fur in white tigers is phenotypically expressed in the wild, once in 10,000 births.

Most of today’s captive white tigers are closely related. Inbreeding is necessary to maintain the recessive gene responsible for the white color. However, the recessive gene may also cause deformities in these creatures. Cleft palate, spine scoliosis, immune deficiency and abnormalities in kidneys are some of the deformities observed in white tigers.

In the past, white tigers, owing to their distinctive appearance, were used for the purpose of entertainment. Siegfried & Roy, the famous entertainers have used white tigers in their shows. Facial deformities and other health problems observed in the white tiger, ‘Kenny’ are representative of the problem of forced inbreeding in captive white tigers.

White tigers have a shorter lifespan than orange tigers. Mutated genes are responsible for their short life span. Inbreeding depression is also one of the reasons behind lower life expectancy in these tigers.

White tigers with a Bengal-Siberian mixed lineage are prone to developing ‘strabismus’. It results from visual pathways being routed incorrectly. ‘Rewati’, a pure breed white Bengal tiger suffered from strabismus.

The natural habitat of white tigers is not different from that of orange tigers. These big cats are found in deep forests as well as snow-clad regions. Bengal tigers are found in hot and humid areas, while the Amur and Indochinese tigers live in cold regions.

In India, white tigers are mostly found in central and southern regions of the country. One of the earliest sightings of white tigers in India was that of ‘Mohan’; this tiger was captured in 1951 by Martand Singh, the king of Rewa; however, Mohan was not the first one to be captured. In December 1915, Maharaja Gulab Singh of Rewa had captured a white tiger.

White tigers are good swimmers. However, these big cats are not capable of climbing trees.

It is a matter of debate whether white tigers originated in Siberia or India. The chances of occurrence of a white recessive gene in Siberian tigers are low. This is because till date, no Siberian white tiger has been born in captivity.

In 1820, a white tiger was exhibited in Europe (London) for the first time.

The night vision of white tigers is superior to that of humans. In fact, it is 6 times better than the human vision.

In 1984, footage of a film featuring a white tigress with her orange cubs was released by the National Geographic channel. The tigress was originally filmed in India by Jim Corbett. The film helped confirm that white tigers had earlier, survived in the wild.

In 2008, the American Zoological Association (AZA) took the decision to ban the practice of breeding white tigers and other such creatures. However, the ban was formalized in June, 2011 ‘Super’, a white tiger from the Rajiv Gandhi Zoological Park, Pune (India) was the first of its kind to undergo a dental surgery.

The white tiger is a rare kind of tiger. Today, it is mostly found in captivity. Unlike orange tigers which are on the verge of extinction, the number of white tigers is increasing. However, white tigers are not considered as important as orange tigers from the point of conservation. In fact, it is better not to breed them and put them to the risk of development of deformities. 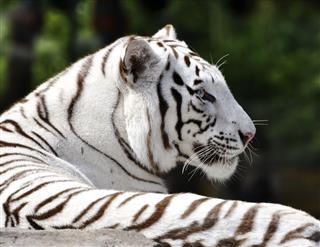 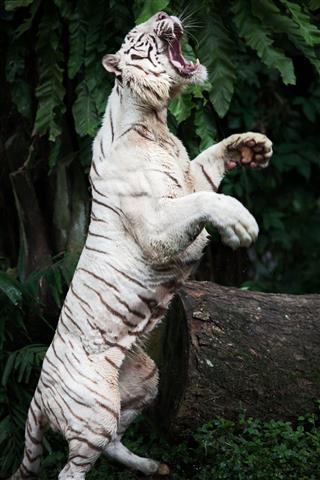 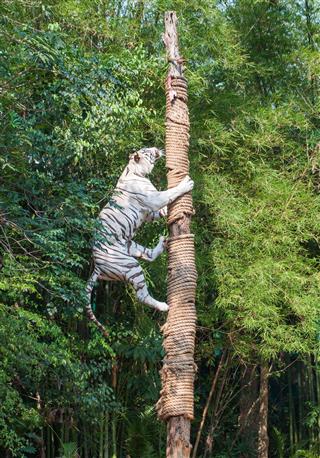 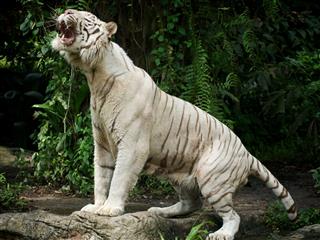