Facts About the Yellow Rat Snake That’ll Leave You Flabbergasted

As intimidating as the yellow rat snake might look, it is as harmless as a rope. But if cornered, it may deliver repeated painful bites in defense. Fortunately, this reptile is a non-venomous constrictor.

You are here: Home / Uncategorized / Facts About the Yellow Rat Snake That’ll Leave You Flabbergasted

As intimidating as the yellow rat snake might look, it is as harmless as a rope. But if cornered, it may deliver repeated painful bites in defense. Fortunately, this reptile is a non-venomous constrictor. 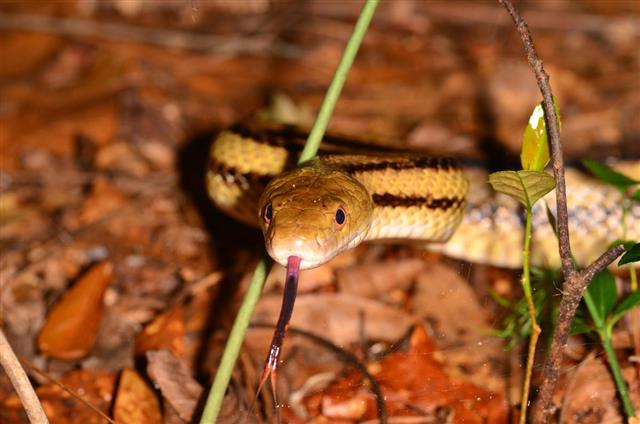 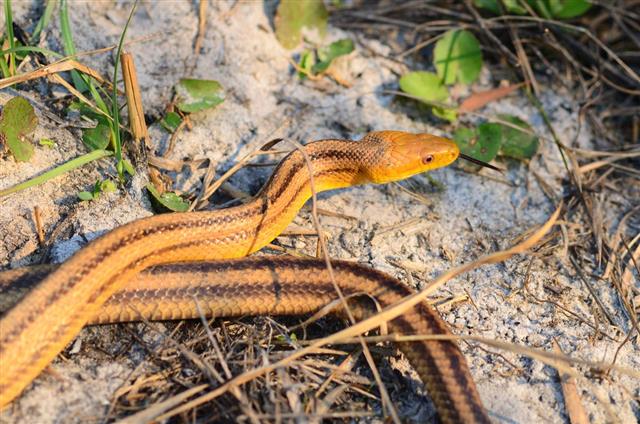 A yellow rat snake usually freezes, instead of running away when it senses danger. It plays dead like a fallen branch to fool its predator...
Yellow rat snake is just another species of rat snake that is widely spread across the northern hemisphere. Belonging to the family Colubrids, this reptile pose no threat to human life. It is also known by the name ‘chicken snake’. Scientifically, it is known as elaphe obsoleta quadrivittata. Population of the yellow rat snake is prevalent in regions from coastal North Carolina to southeastern Georgia and over most of the Florida peninsula.

An adult yellow rat snake can reach a length up to 42 to 72 inches long.

Its color ranges from green, yellow to orange, and is distinguished by four brown to black longitudinal dark stripes, running the length of the body. The color of its belly varies from dark greenish yellow to a rich yellow shade, depending on its regional habitat.

The snake’s forked-tongue is black, and it has a yellow-colored iris.

Its mid body consists of a number of dorsal scale rows with scales that are weakly keeled (having a ridge or shaped like a ridge).

Yellow rat snake juveniles are generally mistaken for different species of snakes, as they look different from adults. They have a dark appearance and are strongly marked with irregularly shaped spots or blotches, against a gray background.

Most often, this reptile is easily mistaken for the yellow snake, also known as Jamaican boa.

Where Does it Slither?

While hunting, the yellow rat snake can be spotted high in cypress and oak trees.

The crawler can also be found near water bodies, barns, abandoned buildings, pastures, knot holes and palm fronds. But because of its love for mice, it is most commonly found in farms. The snake is largely nocturnal by nature.

What Does it Gulp Down?

The yellow rat snake gets its name from its staple food; rats. It also feeds on mice, squirrels, birds and bird eggs. It preys on chicks thus, the name ‘chicken snake’.

Juveniles mainly content themselves with tree frogs, small lizards, baby mice, and other small rodents for first few days, until they are matured enough to take down larger preys.

The yellow rat snake is a constrictor; it suffocates its prey to death, like pythons and other boa species. While hunting, it coils around its prey. As the prey exhales, the snake tightens its grip further leaving no scope for the prey to inhale. This causes the prey to suffocate and die. Thereafter, the snake swallows the kill whole headfirst.

Late April, May and early June are the breeding months for the yellow rat snake. It is considered to be sexually mature when it attains half its eventual size. In other words, mating in these snakes is determined by size and not by age.

Five weeks after mating, the female lays a clutch of about 12 to 20 eggs.

A period of 65 to 70 days is required for the eggs to hatch.

Although, the yellow snake’s bite is not fatal, it may cause severe wound infections. Yellow rat snakes, and other rat snakes in general, act as natural exterminators in barns and other agricultural settings by curbing the rodent population. And that is why farmers are generally happy to have them around for natural and free vermin control. Environmental and habitat degradation are major threats to their population. They also fall prey to human persecution, mainly due to people’s lack of knowledge and fear of snakes. 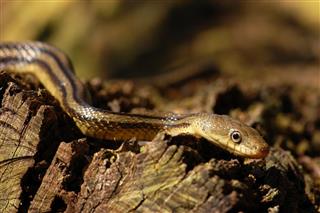 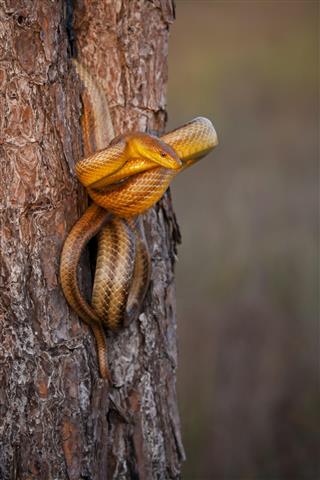 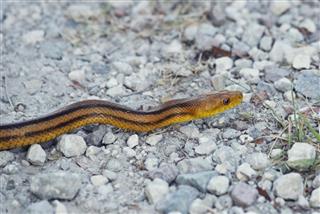